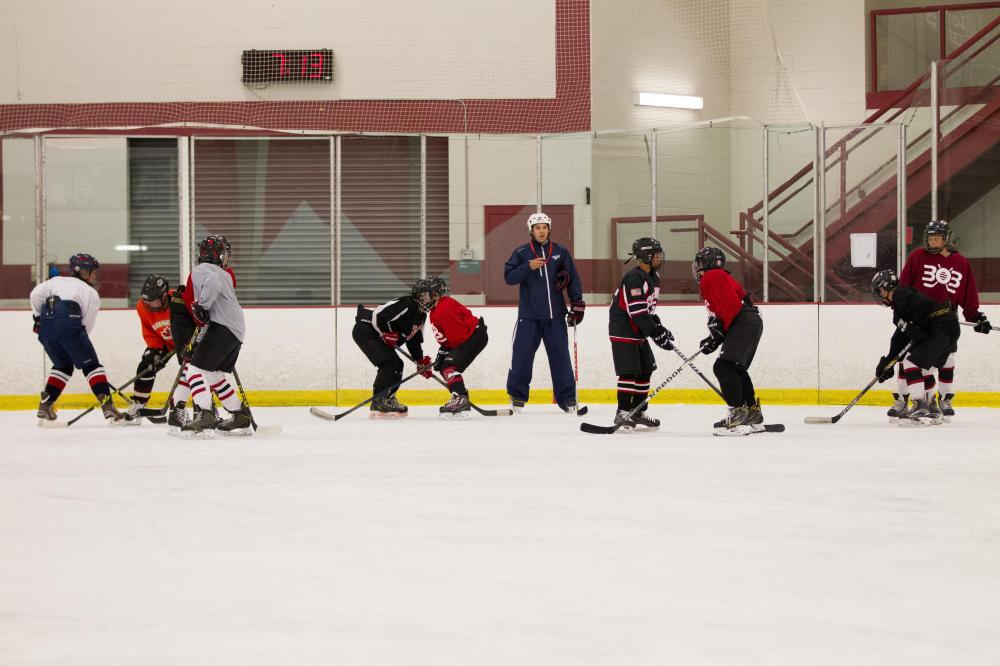 Hockey is the greatest sport to watch, period.

Whether you are talking about mites and squirts or the best players in the world at the NHL level, from a spectator’s standpoint, it’s impossible to find another sport that delivers more.

This is not intended to disrespect other sports in any way. All sports require different levels of skill, athleticism, strategy and execution while providing intrigue that makes them unique and interesting to spectators and athletes alike.

But hockey is different.

At the pro level, what other sports deliver the combination of speed, skill, athleticism, physicality and courage displayed by the athletes competing at the highest levels of hockey? The action is fast, furious and basically nonstop – except for the occasional break for a television commercial or a video review. (As always, the almighty dollar finds a way to intervene.)

And at the youth levels – even the mites and squirts – take it from someone who has played, watched or coached almost every sport imaginable, nothing is as fun to watch as hockey.

There are so many benefits for young athletes playing any sport, so by all means kids should participate in activities they truly enjoy. But while it’s always exciting to see our own children competing and succeeding in any athletic contest, nothing beats a youth hockey game.

My greatest area of expertise is baseball, which I coached at various levels for more than 25 years. Let me tell you that as much as I love baseball, there is no comparison between 8-year-old baseball and hockey when it comes to viewing pleasure. Ball four. Ball eight. Ball 12. Ball 16. No play is routine. Lots of hit batters and tears. And while I’m also not at all a soccer expert, I tried my hand at coaching that, too, and again can assure you that there’s just no comparison.

What kids are able to do on skates, even at the younger ages, is amazing. There is a constant flow and speed to the game. The players can skate, carry the puck, pass and shoot. And they know how to celly. It’s truly a site to behold when the puck is dropped and the youngest hockey players begin to dash and slide all over the rink. While not always pretty, youth hockey is consistently entertaining.

And as far as participation goes, before the game gets too physical, hockey is such a great, low-impact tool to help children improve their level of fitness and coordination while forcing them to develop the ability to think and make decisions quickly all while functioning in a team-oriented environment.

Even at my peak level of fitness, when I was running up to five miles almost daily, there was nothing as physically challenging as playing hockey. It requires a level of fitness that is just different from any other sport, and once you learn to skate it’s like riding a bike – you never forget how and always have a low-impact, fun way to squeeze in a beneficial workout.

If hockey’s so great, though, why does it seem like there are so many intervening factors that hurt the sport; things that just make you go hmm and often seem to be self-destructive?

This is the first in a series of articles about aspects of hockey that just make you go hmm – along with some potential solutions:

Why are tryouts for a sport that runs from September through March (the schedule length is another item up for discussion), held in April? The reasoning is easy to follow, but that doesn’t mean it makes much sense.

When I was growing up (I’m old), tryouts were held a few weeks before the start of practice. Our rink didn’t even open until late October or early November, so that’s often when tryouts took place. We skated for a couple weeks, teams were picked and games started shortly thereafter. We practiced once or twice a week and played a game or two on weekends roughly from November through early March.

Now tryouts are held for most clubs in the United States as soon as USA Hockey Nationals end in April. The urgency probably isn’t as great at the “A” and “B” levels, but the top AA and AAA teams are scrambling to get the first shot at the best players in a given area and want to be able to pick their teams and make offers as quickly as possible.

It’s understandable in a competitive environment that the highest-level teams would want the first crack at the players they consider to be the best, but there are so many flaws with this approach to tryouts.

First, for kids – especially as they approach puberty – how many times do you see a player who grows anywhere from three to six inches and gains 20 or more pounds over a span of five to six months? There are countless stories about kids who get cut because they aren’t big enough, fast enough or strong enough in the spring, but are much more physically prepared five months later.

Obviously, when kids are in their late teens and mostly done growing this approach might make more sense. But why would you want to limit yourself as a coach as far as the players who are available to you while at the same time taking away the opportunity from a kid who might be more than ready and more than deserving in September when your season actually starts?

Making this situation worse is the fact that many competing teams hold tryouts at the same exact time and force kids to make a decision as to their preferred team before they even get to see who they might be up against and who else is going to be on a particular team. Then they don’t make the preferred team and another team at the level they are interested in won’t consider them because they couldn’t make all of its tryouts.

Second, these tryouts tend to be a whirlwind of three or four sessions with a lot of players on the ice. It can be really hard to truly determine who the best players are under these circumstances and nearly impossible to guarantee that you pick the best 15-20 players in just a few sessions.

This is another huge flaw. What is the point of trying to pick the top kids in just a few sessions knowing that it is nearly impossible to do that?

Unfortunately, getting people’s full-season payments often is the top priority for many clubs, and the coaches believe they are smart enough to already know who the best players are in advance – making the actual tryout process a charade, albeit a charade that often generates revenue for the club as 100 or more players might be willing to pay the tryout fees.

If a player misses one session, that could severely hurt his or her chances of making the team. Again, why would any coach want to risk missing out on some of the best players just by being in a rush to get offers out to the perceived top players?

And if doctors, college coaches and pro coaches encourage young players to be well-rounded athletes and play other sports – and kids are also encouraged for their mental and emotional well-being to be well-rounded young people off the ice with other interests besides hockey – why should a kid be penalized for missing an out-of-season hockey tryout to compete in an in-season sport or be in the school play?

Third, a player and family’s decision on where to play shouldn’t be based solely on which high-level team offers the player a contract first. Aspiring to play at the highest level possible is a great goal for any young player, but the most important thing is to find a team, coach and schedule that is the right fit for the player and his or her family as well as a situation where he or she will get plenty of ice time and develop.

There is no way for a player or family to get a real feel for a coach, team or playing situation after a few short tryouts. In fact, there’s no realistic way that coach will even be able to accurately communicate a player’s status – unless he or she is truly one of the top, standout players on the ice at all times – without seeing the team practice and play together for several weeks.

This all would be manageable if teams would actually give players a week or two – or even more – to evaluate their options, but many times they ask for a decision within 24 to 72 hours. More times than not, if they really want someone they will wait. And if they aren’t willing to wait, that says something about their program and the character of those involved.

Why are they pressuring you? What’s the rush? What are they trying to hide?

Still, this is an often-used tactic to get top players to commit right away and to collect the guaranteed money. Be careful. Ask questions. Try to take as much time as they will allow.

This can be a very difficult process to navigate, but the last thing a player or family wants is to rush into a decision that turns out to be a bad one. To develop fully, players need to get plenty of ice time, great coaching and be challenged but not overwhelmed. Being a 14-year-old fourth liner on a very strong AAA team likely won’t help a player as much as being a top player on a good AA team with a respected and knowledgeable coach.

Playing on the top AAA team makes for great social-media bragging material and cocktail party conversation, but think about the potential long-term impact if the player doesn’t develop as much as he or she could have during the years that may be most crucial to his or her hockey future.

This process probably evolved when one team somewhere decided to hold its tryouts as early as possible in hopes of scooping up all the top players. Of course, all the other teams in that area followed suit and soon tryouts for a fall and winter sport were being held five months in advance of the season all over the continent.

USA Hockey could probably fix this pretty easily by mandating that Tier 1 tryouts not start until Aug. 1, with Tier 2 tryouts allowed to begin Aug. 15 or later. No games or tournaments should be counted toward the upcoming season before Labor Day.

It seems like a pretty simple solution, but youth sports have become big money and there are outside forces at work here as more in-season tournaments are scheduled in August each year and the longer schedule allows for higher league, team and tournament fees to be collected.

There is no need for youth hockey season to run from August until almost April. Starting Oct. 1 and putting a hard limit on the number of games would be even better and go a long way toward eliminating many of these tryout issues as well as 80-game schedules that can lead to burnout and actually hinder player development.