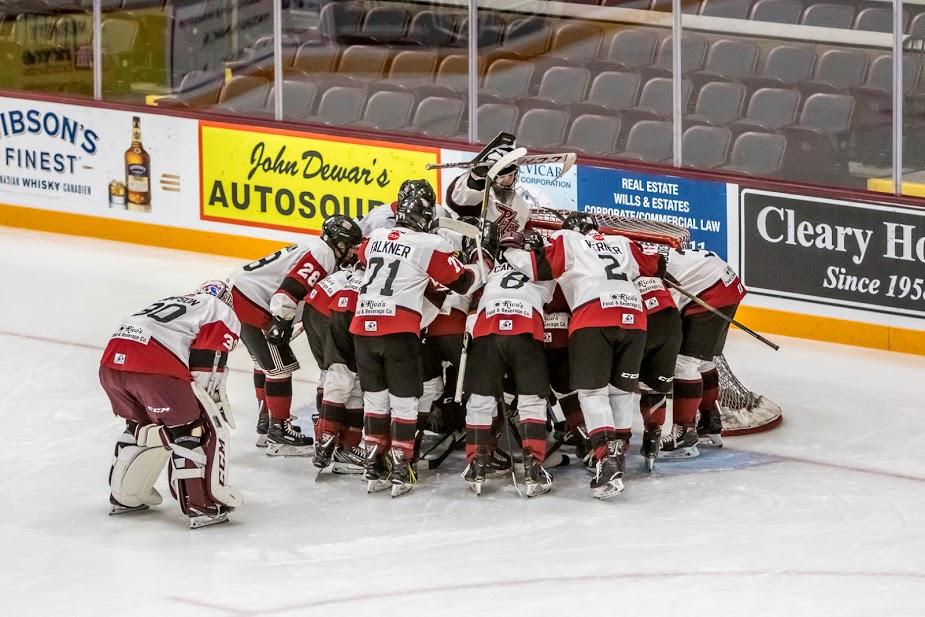 All Great Things Come to an End: A Tribute to the Peterborough Petes AAA Midgets

This is a series of stories that will be updated with a new story every day or two paying tribute to players, coaches or teams that unexpectedly had their seasons cut short as a result of the coronavirus outbreak.

As the person who types in the weekly MYHockey Rankings top 10 Tweets for the Tier 1 leagues around North America, I can attest to the fact that from October through last week I got quite accustomed to placing the Peterborough Petes Midget AAA team at the top of the Ontario Boys’ rankings.

In fact, I can only remember one week that another team jumped into that spot. I was shocked, to say the least, and had to double- and triple-check myself to make sure I wasn’t making a mistake. But then the following week the Petes were back on top, where they would remain right up until the coronavirus outbreak ended their season late last week.

And what a season it was, especially considering that Peterborough had fallen on hard times of late and actually didn’t even field a team twice in recent years, including as recently as the 2018-19 season.

That was before the Roche family entered the picture, however.

Head coach Scott Roche came over last spring from the Central Ontario Wolves, adding his brother Dave as an assistant coach and his father Mike as a trainer. The Roches were able to lure several Ontario Hockey League prospects and draft picks to the Petes from outside Peterborough before Petes OHL General Manager Mike Oke placed three of their 2019 draft picks with the midget team.

And the rest is history.

Peterborough finished the year 45-10-4 and ranked eighth overall in Canada to go along with the No. 1 Ontario Midget AAA ranking. The Petes won the Ontario Minor Hockey Association (OMHA) Eastern AAA Hockey League (ETA) regular-season title with 28-6-2 mark and had earned a spot in the OMHA round-robin finals by knocking off Central Ontario and the Whitby Wildcats in the ETA playoffs.

“It’s a team that plays together and gets along great,” Scott Roche told The Peterborough Examiner all the way back in October in a bit of foreshadowing. “It’s almost hard to create what we have in the dressing room with the guys supporting each other. It’s just all fallen into place.”

Along the way, the Petes outscored their opponents, 237-96, for the season for an average of 1.63 goals allowed per game in 59 contests. Their two goalies, Michael Simpson and Ayden Bulmer, ranked first and second in the ETA in goals-against average at 1.67 and 1.78, respectively, while literally splitting time between the pipes. Neither goalie appeared in back-to-back games at any point.

"I couldn’t have asked for a better group of guys to play with,” wrote Petes goalie Ayden Bulmer in a direct message. “I’ve played with most of them for a number of years at the AAA level, but it was awesome adding skill from some out-of-town players who have been our competition in the past. I think it gave our team depth, added additional high-level skill and assisted in providing the perfect combination for our team to succeed the way we did.”

As the youngest of the top-12 teams in Ontario, Peterborough started the year by winning 26 of its first 29 games and allowed two or fewer goals 45 times. Six of the Petes’ 10 losses were by a single goal, with several others decided by two goals thanks to empty-net tallies.

“I felt honored to wear a Peterborough Petes jersey for the first time,” defenseman and Erie Otters prospect Ethan Schoonderbeek wrote in direct message. “Even as a new player, the boys all made me feel like part of the team. We were like brothers. This connection made us a successful team.

The team was looking forward to competing in the OMHA Championships and then potentially for a national championship in the Telus Cup.

There were 149 teams that began the season hoping for the opportunity to advance to the Telus Cup, 21 of those being members of the OMHA. The OMHA champion would have advanced to a six-team Central Region tournament to decide one of five spots (in addition to the host team) in the national-championship event.

The Petes had every right to believe that a national title might be within their reach after going 6-0-1 to in the postseason and outscoring their opponents, 44-10, with 14 players contributing five or more points in the process.

“You will see a lot of this roster get great chances with junior teams next year,” the team Tweeted from its @aaa_petes account. “This team has 16 of 18 that are born in 2003. Scary to think we could even be stronger next year! Not bad for Year 1 of what had been a failing program in previous years.”

Unfortunately all of Peterborough’s championship dreams were shattered March 12 when Hockey Canada cancelled all sanctioned activities, including national championships.

“This was the last time we left the ice together,” Schoonderbeek Tweeted. “We were excited after having earned our ticket to the OMHA Championships. We didn’t know it was out last game together.”

Surely the only feeling now is one of disappointment, but seasons like this often only come around once in a lifetime. At some point, Peterborough’s players will look back on the year and remember it fondly as one of the best of their lives.

In the meantime, we would like to congratulate the Petes on an incredible season and earning the top ranking in all of Ontario.

“We were really on a roll and we all knew we could have gone on a lot longer when the season came to an end,” Schoonderbeek said. “I wasn’t distraught, but the best word to describe what I was feeling was disappointed.”

Added Bulmer: “There’s a camaraderie amongst us that can’t be broken, friendships made through a shared passion for hockey. We worked so hard to get to where we got, and it’s hard to see this season come to an end so abruptly. It was amazing knowing we’d moved onto the OMHA’s, and I feel our season was far from ending. We had a good chance at doing some great stuff.”