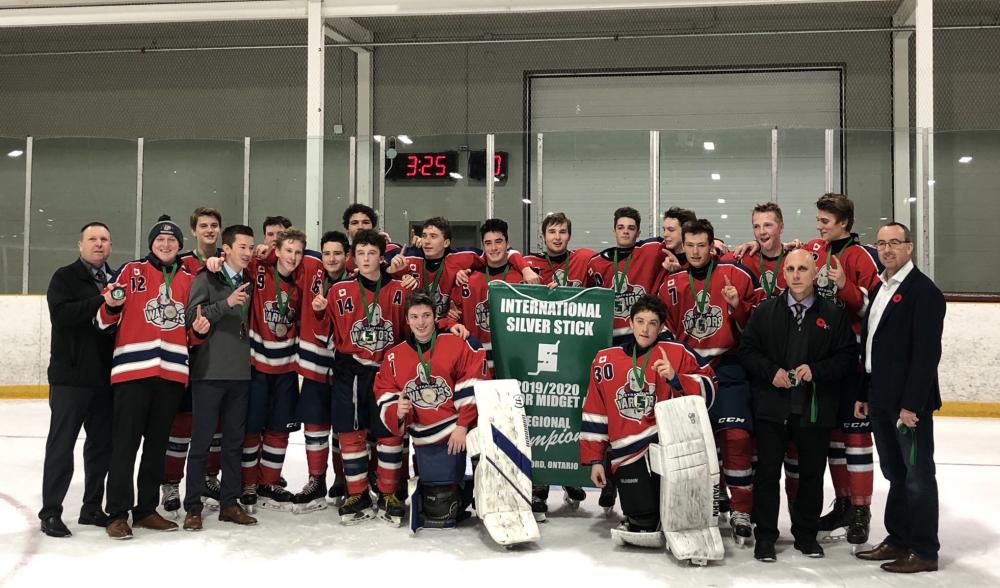 All Great Things Must Come to an End: Stratford Warriors Midget Tribute

For young athletes – or any teenager on the way to young adulthood – there is an excitement that comes with thinking about the future and finding out what lies ahead.

But with that excitement comes a nervousness about leaving behind longtime friends, classmates or teammates as well as possibly moving away from family members to pursue that next step in life. To move forward and continue on the path toward realizing goals and dreams, at some point a young person has to take those first steps outside of his or her comfort zone.

That’s what makes the senior year in high school so important and memorable, for athletes and non-athletes alike.

For many hockey players, that last hurrah often comes at the midget or 18U level when a group of teammates that may have played hundreds of games together over many years realizes that when the season ends, whether they are continuing on to play hockey at the junior level, heading to college or entering the workforce, they won’t be together as a group anymore.

That was the case for seven members of the Stratford Warriors midget team in Ontario who had been playing together since they were teammates in the atom age classification (ages nine and 10).

They had enjoyed tremendous success as a group over the years, and this year was going to be their last chance to put together a dream season and hopefully capture a provincial championship before heading off in their different directions. It was one last opportunity to play together, compete together and create a final set of hockey memories that would last for the rest of their lives.

The Warriors were well on their way to completing that dream season when it all came to a screeching halt March 13 thanks to COVID-19.

A team that was classified as “A” level because of its population, Stratford was scheduled to take on the “AA” Kitchener Rangers in the Minor Hockey Alliance of Ontario finals when team members got word that the playoffs had been put on hold, effectively ending their season.

“I think it was just the feeling of familiarity and success, as well as the guys in the room, that brought me back each and every year,” team-captain Noah Rusen-Steele said. “If you’re winning and having fun, there’s no reason to leave. The core group was so special, because we’ve had players – and close friends – come and go throughout, whether it was to play AAA or to go back to their local area. Guys that you had won championships with had left, but the core group continued to add new players, build new bonds and go on to win again.

“For our season and minor hockey careers to end the way it did this year was incredibly disappointing to say the least. Win or lose, all you ask for is the opportunity to go out there and compete.”

While they didn’t get the opportunity to compete in those final tournament games and to achieve their ultimate goal of winning a provincial championship, the Warriors put together an impressive resume that indicated they would have been a difficult out for any opponent.

In addition to the unbeaten league record, Stratford posted an overall mark of 46-4-6 and outscored its opponents, 234-83, to earn the final No. 1 ranking from MyHockey Rankings in the Ontario Midget A/B classification. The Warriors compiled a 26-3-5 record against AA teams, including a 2-1 overtime victory against the Mississauga Terriers, the top-ranked AA team in Ontario.

They concluded their season with 19-straight games against AA opponents, going 13-2-4 during that stretch, and also recorded victories against the 18th-, 19th-, 25th and 33rd-ranked AA teams in Ontario during the year. Stratford's only losses were to the Vaughan Panthers, Ontario’s eighth-ranked AA team, the USA AA 30th-ranked Marquette Jr. Wildcats, Canada’s No. 2-ranked A Elmira Sugar Kings and Canada’s 18th-ranked AA Waterloo Wolves.

“This year’s team had a great mix of 2002 and 2003 players that jelled together very quickly,” coach Troy McMann said. “This group challenged each other and kept one another accountable, which was an early sign of great things to come … The team really started to believe in themselves when they won the AA Silver Stick tournament by beating the top-ranked AA Mississauga team. That victory vaulted the team to the undefeated regular season and helped propel them through the playoffs and to the Alliance finals before the season was cut short.”

Only a strange new virus could stop the Warriors, who despite having their season cut short had carved quite a memorable path through the Ontario minor hockey world over the years. In addition to capturing the Stratford Silver Sticks regional tournament with a perfect 5-0 record this year, they won four Alliance championships and made three OHF provincial tournament appearances, bringing home the bantam championship in 2017.

In addition to the seven Warrior "lifers" who had their minor hockey careers abruptly ended, three other players on this year’s roster saw their careers come to a close, too. Riley Mathieson, Carson Knott, Tate Gaylor, Callan Ferguson, Eric Roes, Jared LeSouder, Cohen LeSouder, Adam Windsor, Ben Wyatt and Rusen-Steele may play junior hockey or at some other level in the future, but they will never all play together again.

“There is no closure for us to step away from the game after playing that long,” Rusen-Steele said. “I still have that urge to compete that hasn’t been satisfied, but there are things in life that are bigger than hockey, and this pandemic is one of them.”

McMann was just as dejected as the players when the season was halted.

“The decision to cancel the rest of the season was disappointing from the aspect that this special group would not able to finish what it started,” he said. “There may never be a team as strong-willed as this group to never achieve its final goal.”

Jared LeSouder reflected on past teams and seasons when pondering all that the Warriors had accomplished together.

“I recall a quote from one of our earlier coaches who said, ‘We play like champions today, together,’” he said. “That really resonated with me to play as a team and stick together through all of our minor hockey career.”

Yesterday, today or tomorrow, this Stratford Warrior team will always be remembered as champions.

Congratulations on a great season and great careers and best wishes as you take those next steps toward adulthood!