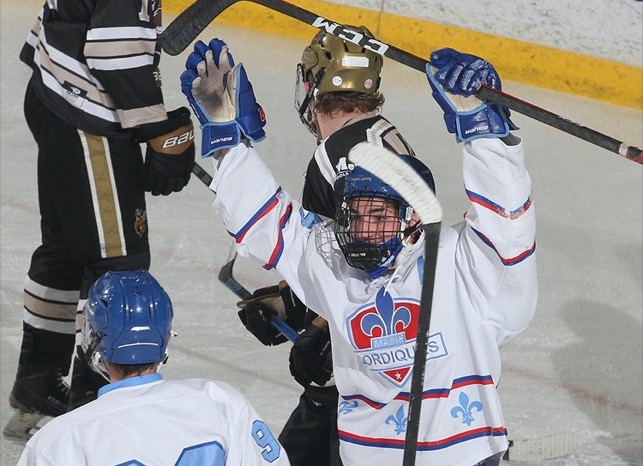 We cruised into amateur hockey's holiday break with four great matchups that comprised our Week 13 Games of the Week last weekend. In our featured contest, a battle of the top two USA Girls 14U Tier 2 teams, the top-ranked Massachusetts Spitfires earned a 3-1 victory against the No. 2 East Coast Wizards.

Recaps of all the games can be found below.

The top-two USA 14U Tier 2 Girls teams and heated New England Girls Hockey Legue rivals faced off in Massachusetts Sunday, and the second-ranked Wizards simply could not overcome their 11 penalties in the 3-1 loss. They would bounce back later in the day, however, by skating to a 2-0 win vs. the 15th-ranked Bay State Breakers to enter the holidays with a 23-8-7 record. The Spitfires capitalized on one of their power plays for the insurance goal that made it 3-1 after taking leads of 1-0 and 2-1 in the contest. They improved to 23-6-1 with the victory. Lauren Ash had the lone Wizards' tally, tying the game at 1 with a floater from the point. Both teams are 2-1-0 in NEGHL play.

The Reapers won their third straight game at the Pittsburgh Mid-Winter Classic as they continued the roll that eventually would end with a heartbreaking loss to the 15th-ranked Buffalo Jr. Sabres in the waning moments of the championship game. Chicago went on to beat host No. 8 Pittsburgh Penguins Elite, 6-5, in the tournament semifinals and concluded the wekend with a 36-6-1 record. The Blues posted a 1-4 record at the event and are 34-16-0 overall. This game was tied at 1 after two periods before Chicago's Holden Sandner netted the game-winner with 5:40 left in the third period. Patrick Taylor and Ari Popovsky assisted on that tally, which set up Alexander Milojevic's empty netter with 23 seconds remaining. Milojevic also assisted on Anton Gesink's goal, which opened the scoring with 4:03 left in the opening frame. Landon Jackman notched the Blues' lone tally, with assists going to J.P. Montgomery and Colin Varady, to tie the game at 1 in the second. Sandner also scored a pair of goals against both Pens Elite and Buffalo in the semifinals and finals to conclude the tournament with six goals and seven points.

The Nordiques scored the minor upset against the Reapers as part of a 4-0-0 showing at the final NAPHL shocase of the 2021 calendar year. Maine also knocked off a very strong top-five-overall Northstar Chrisitian Academy team, 2-0, to open the weekend before defeating Biggby Coffee and the Des Moines Buccaneers. The Nordiques evened their NAPHL record at 8-8-0-0 with the victories and are 28-10-3 overall. The Reapers went 2-2-0 in Minnesota and are 13-4-2-1 in NAPHL play and 26-13-0 overall. In Sunday's contest, Hunter Dowdakin got Chicago on the board first at 6:37 of the first period thanks to helpers from Justin Schneider and Charlie Emme. Jackson Truchan evened things for Maine about six minutes later, but David Deputy converted Noah Dry's feed to put the Reapers back in front 13:04 into the second. That's how the second period would end, but Maine stormed back with three tallies in the third period, including a pair from Zach Herman, to secure the comeback win. Jackson Truchan began the rally with a goal 4:19 into the final frame. Thomas Kiesewetter stopped 15 shots to pick up the win in net for the Nordiques.

The Barons continued to roll in the Tier 1 Elite Hockey League, recording an exciting win against Victory Honda as they improved to 8-0-0 in Tier1EHL play and 20-7-5 overall. Victory Honda, 2-6-0 in league play and 21-18-1 overall, jumped out to a 2-0 lead in this game thanks to first-period goals from Ty Kraut and Ian Lancaster. The Barons rallied for the next three tallies, with A.J. Spellacy, Dane Ramirez and Aiden Petroff scoring to give Cleveland a 3-2 lead after two. David Benn tied it up with 11:16 to play before Tyler Fortson pushed Victory back in front just 13 seconds later. The Barons then scored three of the final four goals during a frantic span of 4:10 to steal the victory. Austin Andrews, Ramirez and Braden Esenwine scored for Cleveland, with Sammy Blades potting one for Victory Honda. Alex Insana stopped 22 shots to earn the win, while A.J. Kerekes made 32 saves in suffering the hard-luck loss.