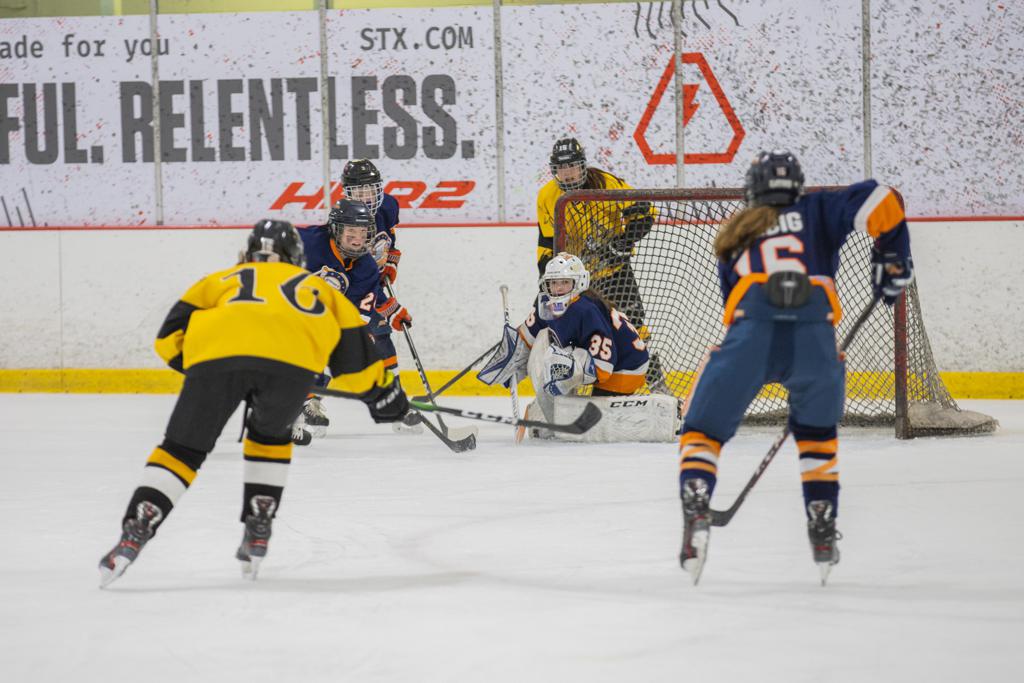 Week 13 MHR Games of the Week

Welcome to the last big hockey weekend before the winter holidays. Every week that we present our MyHockey Rankings Games of the Week it gets harder to believe how fast the season is flying by. Many people view Christmas as the midway point of the amateur hockey season in North America, but the reality is that for many teams that play the majority of their games earlier in the season, we are well beyond the mid-point. That said, there is a ton more great hockey to come, and we are here for it.

This week we jump around a little bit. Our featured Game of the Week, which can be seen on LiveBarn, is a No. 1 vs. No. 2 matchup at the 14U USA Girls Tier 2 level between the Massachusetts Spitfires and East Coast Wizards of the New England Girls Hockey League. These teams have met twice already, with three total goals scored, one of those into an empty net. They have combined for 30 shutouts thus far.

Our other top matchups of the week come from the Dick's Sporting Goods Mid-Winter Classic in Pittsburgh, the NAPHL Showcase in Blaine, Minn., and the Tier 1 Elite Hockey League Showcase in Arizona.

It's a huge NEGHL matchup as a pair of Tier 2 teams that have taken on their share of Tier 1 opponents square off in Massachusetts. The Spitfires enter this contest coming off a 1-0 loss to the No. 6 Boston Jr. Eagles last weekend. Despite that setback they are 22-6-1 and have outscored their opponents, 99-33, allowing slightly more than a goal per game while recording 13 shutouts. Prior to last week's loss, the Spitfires had won three straight contests following losses to the Tier 1 Connecticut Jr. Rangers and the third-ranked North Shore Vipers. They have earned victories against four Tier 1 teams, and of their six losses, four have come against Tier 1 clubs. Massachusetts opened the season by going 17-2-1 and has gone 5-4-0 since. At one point, the Spitfires recorded five consecutive shutouts. They own two victories against the Wizards this season, winning by scores of 1-0 and 2-0 back in September. Meanwhile, the Wizards have posted a 22-7-7 record of their own against a difficult schedule that also has featured many Tier 1 opponents. They have posted a 1-2-3 mark vs. Tier 1 teams and overall have outscored their opponents, 110-34, for the season. That works out to fewer than a goal per game allowed, and the Wizards have recorded 17 shutouts. They had a four-game shutout streak at one point and are 15-2-5 in their last 22 outings.

One of many great matchups at the Dick's Sporting Goods Mid-Winter Classic outside of Pittsburgh, the Reapers look to bounce back from a rare loss suffered at the hands of No. 10 Little Caesars (4-0) Dec. 12. Prior to that, Chicago had been unbeaten in its previous five contests (4-0-1), dating to a 5-4 loss to the fourth-ranked Anaheim Jr. Ducks Nov. 20. Entering the weekend, the Reapers had scored an impressive 200 goals in posting a 32-5-1 record, holding their opponents to 63 goals or 1.66 per contest. They won their first nine games of the year and have gone 23-5-1 since. Chicago was 7-2-1 in the 10 games leading up to the tournament and had beaten the Nos. 4, 6, 8, 9, 11, 16, 17 and teams. These two teams split a pair of meetings earlier in the season, with the Reapers skating to a 7-1 victory Nov. 7 and the Blues earning a 2-0 shutout Nov. 13. St. Louis is 33-14-0 on the year and has outscored its foes, 197-123. The Blues split their opening two games of the tournament, blanking the No. 26 Pittsburgh Vengeance, 6-0, before falling to No. 8 Pittsburgh Penguins Elite, 5-3. That setback snapped a nine-game winning streak that dated to the 7-1 loss against the Reapers.

The final NAPHL Showcase of the 2021 calendar year featuers a pair of top-25 18U teams facing off in Minnesota. The Reapers are 11-3-2 in NAPHL play and in second place in the Tier 1 Central Division behind the nation's overall No. 5 and second-ranked Independent Prep team, the Northstar Knights. Maine is 4-8-0 in league play and in fourth place in the Tier 1 East, a point behind the Seacoast Spartans. Overall, Chicago is 24-11-0 and has outscored its opponents, 158-87. The Reapers are the top-ranked team in Illinois. Maine has suffered just two losses outside of the NAPHL, posting a 20-2-3 mark in non-leauge contes, and has outscored its foes, 124-80. The Reapers dropped overtime and shootout decisions to Northstar in their two outings prior to the showcase, ending a nine-game winning streak. They are 11-3-0 in their last 14 outings and beat the No. 5 St. Louis AAA Blues, 7-4, Oct. 17. The Nordiques dropped an overtime heartbreaker against No. 2 Mount St. Charles Dec. 12 at the Overspeed Hockey Holiday Classic. That loss snapped a four-game winning streak and a 6-1-1 run. They dropped another one-goal decision and earned a tie vs. Mount St. Charles Nov. 13 and 14.

This pair of Tier 1 Elite Hockey League teams faces off at the final T1EHL Showcase of 2021 in Arizona. As of Saturday morning the Barons were 4-0-0 in league play, while Victory Honda was 1-3-0 despite being ouscored by just three goals, 14-11, in T1EHL contests. The Barons, meanwhile, held a 15-3 scoring advantage over their opponents in league play. Cleveland is 12-7-5 outside the T1EHL and 16-7-5 overall, having ouscored its opponents, 92-64. The Barons have the sixth-toughest schedule in the country and carried an eight-game unbeaten streak (7-0-1) into the weekend. These two teams met twice Nov. 13, with Cleveland earning a 4-1 victory and the teams skating to a 3-3 tie. The Barons earned a pair of victories by 3-2 and 5-2 scores vs. No. 6 Pens Elite Oct. 30-31 and dropped a 2-1 decision to the No. 4 Chicago Mission Nov. 6. They also suffered a one-goal loss to the ninth-ranked North Jersey Avalanche earlier in the year and went 1-0-2 vs. the No. 14 Buffalo Jr. Sabres. Victory Honda is 20-15-1 overall and has outscored its opponents, 122-90. They entered the showcase having gone 5-9-1 in their previous 15 outings after going 15-6-0 prior to that. Victory skated to three wins vs. No. 12 Team Illinois earlier in the year and beat the 13th-ranked St. Louis AAA Blues, 5-1.