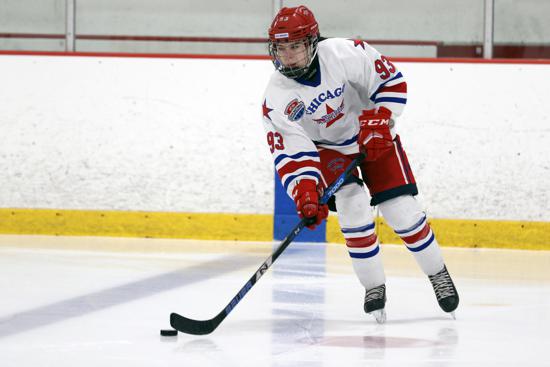 As the United States youth hockey season continues to progress toward April’s USA Hockey National Championships, we head to the Central District for our Week 25 Games of the Week. The Central District is comprised of organizations in Illinois, Iowa, Kansas, Nebraska, Missouri and Wisconsin, and teams representing many of those states have converged upon ice rinks in Omaha, Neb., and Fon du Lac, Wisc., to compete in the Kohlman Cup Central District Playoffs for Nationals berths this weekend.

Each tournament started Friday, with the Boys Tier 1 playoffs for the 14U, 15U, 16U and 18U classifications being held, along with the girls 16U and 19U Tier 2 playoffs, at Tim Moylan IcePlex, Motto McLean Ice House and Baxter Holland Arena in Omaha. Girls Tier 1 14U, 16U and 19U play will take place at Fon du Lac Blue Line, with all of those games available to be viewed live or on-demand on LiveBarn.

A quick glance at the tournament field at each age group shows a nice cross-section of highly ranked programs. The 14U boys Tier 1 tournament includes the Nos. 7, 9 and 4 teams in the country. Two top-10 and three top-27 teams are competing in the 15 boys Tier 1 tourney, while at 16U three top-25 teams are facing off. And in 18U boys action, four teams ranked among the top 35 are playing.

LiveBarn Featured Game of the Week

Play in the 14U tourney began Friday, with the Capitols knocking off the No. 41 St. Louis Lady Blues, 3-2, in overtime. That means Madison got two of the three available points in that contest, setting up Saturday’s 10 a.m. contest between the Blues and Young Americans. A CYA win would set up a winner-take-all scenario in our featured contest Sunday. Chicago entered the weekend with a 17-8-1 record and having outscored its opponents, 76-43. The Young Americans played Madison Jan. 16, dropping a 3-1 decision, before rebounding on March 6 to record a 1-0 shutout over the Capitols. CYA went two months without playing, from Nov. 15, to Jan. 15, and has gone 10-5 since returning to action. The Capitols entered tournament play with a 23-17-5 record and holding a 128-107 scoring edge over their opponents. They dropped four straight games leading into the weekend, with the losses coming against the Nos. 1, 10 and 12 teams. Madison returned to action after a month layoff on Jan. 15 and has posted a 10-9-1 record since starting back up.

Girls 19U Tier 1 play began Friday, with the Lady Blues knocking off the No. 21 Madison Capitols, 3-2, to take all three points in that contest. That means Saturday’s 2 p.m. matchup between Team Illinois and the Capitols will determine what the stakes are for our featured game Sunday. A TI win would set up a showdown for all the marbles. The Blues are now 11-16-0 after that win and have outscored their opponents, 67-65. ­These two teams have met twice this year, splitting a pair of one-goal decisions. Team Illinois skated to a 3-2 victory Jan. 8, with Team Illinois winning, 2-1, Jan. 9. The Blues faced an extended layoff from Oct. 18 until Jan. 8. The Jan.8 TI matchup was the Blues’ first game after that break, and they went 3-10 coming off the layoff before winning five straight prior to yesterday’s victory over Madison. Team Illinois brings a 22-14-2 record into the weekend and has outscored its foes, 89-70. That first contest against the Lady Blues Jan. 8 also marked TI’s first contest following a month-long break. St. Louis won three straight coming out of the hiatus but has gone 5-6-1 since.

The 14U boys’ tournament started Friday, with the Mission skating to a 3-1 victory against the ninth-ranked St. Louis Jr. Blues and the Gamblers posting a 4-1 victory against Omaha. Saturday’s games will determine whether our featured Sunday matchup is a winner-take-all affair. The Gamblers face the Blues at 2:45 Saturday, with the Mission taking on Omaha at 1:15 p.m. NE Wisconsin is now 31-6-0 following Friday’s victory and has outscored its opponents, 181-86. The Gamblers had won four of their previous five contests before falling to the No. 2 Bishop Kearney Selects, 5-2, Jan. 31. Friday’s game was their first since that contest. The Gamblers beat the Mission, 6-2, Jan. 30 and the Blues, 2-1, the same day. That was the fourth meeting of the year between the teams and the Gamblers’ third win in the series. The two teams have split a pair of one-goal decisions, with NE Wisconsin also winning by 6-3 and 3-0 scores. Chicago is now 18-10-1 during its COVID-impacted season and has outscored its foes, 92-69. Friday’s victory was the Mission’s first game since a 2-1 overtime win against the No. 37 Chicago Young Americans Feb. 28. Chicago has won four straight games but is 5-5 in its last 10. The Mission did not play between Nov. 22 and Jan. 8 and have gone 14-8-1 since returning to action.

In Friday’s 18U action, CarShield earned a hard-fought 7-5 victory against the No. 35 Des Moines Buccaneers while Team Wisconsin knocked off the No. 16 Chicago Mission in a 5-4 thriller. Saturday’s schedule has the Mission taking on CarShield at 10:15 a.m. and TW facing the Bucs at 11 a.m. If CarShield and Team Wisconsin win, our Sunday featured contest would determine the champion. They will be meeting for the first time this season. CarShield is 45-15-0 after Friday’s victory and has outscored its opponents, 236-149. They are one of the few teams this year not to face an extended COVID-related shutdown and have completed a full schedule. CarShield has won six of its last seven contests, falling only to the No. 14 Esmark Stars during that stretch. They are 11-6 in their last 17 outings after opening the year by going 34-9. TW has only managed to play 23 games this year, going 8-12-3 including Friday’s win. They were off from Feb. 27 until March 20, returning to action with a pair of losses last weekend against NorthStar Christian Academy, the No. 2 Independent Prep and No. 6 overall 18U team in the nation. Team Wisconsin also was off between Oct. 25 and Feb. 26. Prior to the shutdown they had posted a 5-10-3 record. According to MHR, TW has played the toughest schedule in the Central District and the country.