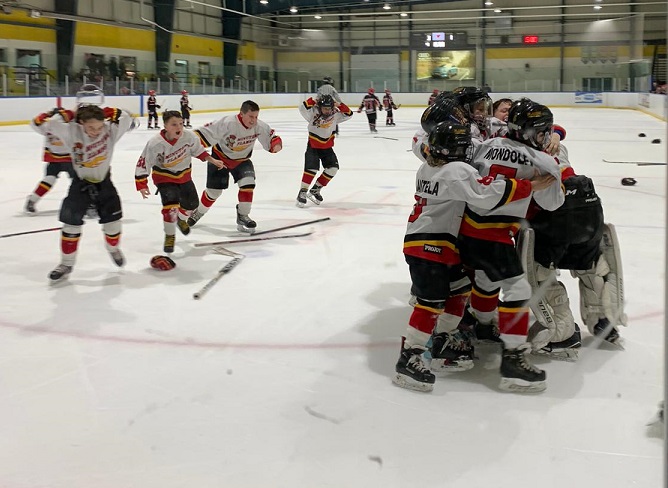 Week 12 MHR Games of the Week

Even in areas of the United States where youth hockey is still permitted, the schedule starts to lighten up a bit for Week 12 as we prepare to enter the traditional holiday break. This week our Games of the Week take us to Arizona for a Tier 1 Elite Hockey League Showcase featuring 15U, 16U and 18U boys’ teams and back up to New England for an Eastern Hockey Federation clash of 12U titans between the No. 3 Boston Jr. Eagles and #4 Minuteman Flames.

On the girls’ side, we head back to the Tier 1 New England Girls’ Hockey League for a pair of games featuring highly ranked Tier 2 teams at the 14U and 12U levels.

These two teams face off Sunday in Arizona as part of the Tier 1 EHL Phoenix Showcase. Belle Tire opened play in the Showcase Friday with a 3-2 win against No. 19 Dallas Stars Elite, while the Jr. Ducks knocked off the 14th-ranked Rocky Mountain RoughRiders, 1-0. These two teams are meeting for the first time this season. Belle Tire has won four of its last five games and 19 of its last 22 to improve to 17-7-1 on the season. Included among those victories have been wins against the Nos. 11, 12, 16, 19 and 24 teams. Belle Tire also suffered a hard-fought 3-2 loss to second-ranked Pittsburgh Penguins Elite Oct. 2. For the season BT has outscored its opponents, 93-52, holding the opposition to one goal or fewer 10 times. The Jr. Ducks are 13-4-0 overall and have won their last two contests by identical 1-0 scores against the nation’s No. 11 and 14 teams. They have won five straight since dropping a pair of decisions to NorthStar Christian Academy, the fifth-ranked 18U team overall, and the Oakland Jr. Grizzlies, the No. 6 18U Tier 1 team. Anaheim also knocked off NorthStar, 5-2, Oct. 31. The Jr. Ducks opened the season by going 9-2 before the loss to Oakland on Halloween. They have outscored their foes, 55-37.

It’s an Eastern Hockey Federation 12U tilt between top-five teams as the Boston Jr. Eagles take on the Minuteman Flames in downtown Boston. The Jr. Eagles are in second place in the EHF with a league record of 9-5-2, which leaves them a point ahead of the 9-3-1 Flames, who have three games in hand. The No. 11 Boston Jr. Terriers actually lead the EHF at 11-5-3, but they have played three more games than the Jr. Eagles and six more than the Flames. These two teams opened the season way back on Aug. 29, with the Flames earning a 2-1 victory. Boston rebounded to earn a 2-1 overtime victory over the Flames Aug. 30. They played again Sept. 19, with the Flames skating to another hard-fought 2-1 win. The Jr. Eagles are unbeaten in their last five games (4-0-1) and are 10-1-3 in their past 14. They have gone 14-5-3 since opening the campaign with a 2-4-3 mark and have recorded wins against the Nos. 4, 7, 8, 11 and 16 teams while outscoring their opponents, 117-68. Minuteman is 14-6-2 overall despite splitting a pair of games with the Jr. Terriers Dec. 5 and 6. The loss to the Terriers snapped a 10-game unbeaten streak (9-0-1). The Flames have a 3-3 tie vs. the top-ranked Mid-Fairfield Jr. Rangers on their resume along with victories over the Nos. 3, 7, 11 and 17 teams. They have outscored their opponents, 79-43, and have recorded shutouts in four of their past seven outings.

The top two teams in the New England Girls Hockey League American Upper 14U Winter Standings clash Sunday in Massachusetts. The seventh-ranked Breakers actually lead the winter session with a 3-0-1 record, just ahead of 2-0-2 Assabet Valley, after Assabet finished first during the fall campaign at 11-0-0. Bay State compiled a 5-6-1 record during fall play. Assabet has yet to lose on the season, bringing a 20-game unbeaten streak and a 16-0-4 overall record into the weekend. Bay State is 13-9-3 overall. Assabet Valley won the previous two meetings between the two teams by scores of 5-1 and 6-1 and has outscored its opponents, 77-18, for the season. Three of Assabet’s four ties have come in its last six outings, with two of the deadlocks against the No. 31 Middlesex Islanders and the third vs. the No. 23 Minuteman Lady Flames. Assabet has held its opponents to one goal or fewer 17 times, recording seven shutouts in the process. Bay State is unbeaten in its last five contests (4-0-1) following a 5-1 loss to the No. 2 East Coast Wizards Nov. 28. The Breakers are 9-3-1 after opening the year 4-6-1 and have outscored their opponents, 56-49.

The New England Girls Hockey League 12U American Winter Season heats up with this matchup of top-six 12U Tier 2 teams on the Cape Saturday. The Storm are playing just their third game of the winter session, bringing an 0-1-1 record into the weekend after going 10-1-1 in fall play. Charles River is 1-2-0 during the winter slate and 10-5-2 overall. Cape Cod has outscored its opponents, 53-20, and saw its seven-game unbeaten streak (6-0-1) halted with a 6-2 loss to the second-ranked East Coast Wizards Dec. 6. The Storm and Blazers split two contests earlier this season, with Charles River earning a 2-1 victory Sept. 27 and Cape Cod winning, 3-0, Oct. 4. Charles River is in the midst of a four-game winless streak that includes a pair of losses to the No. 11 Bay State Breakers Dec. 12 and 13 in its most recent outings. Prior to those setbacks the Blazers had posted a 6-1-2 mark in their previous nine contests. Charles River has outscored its foes, 55-31.