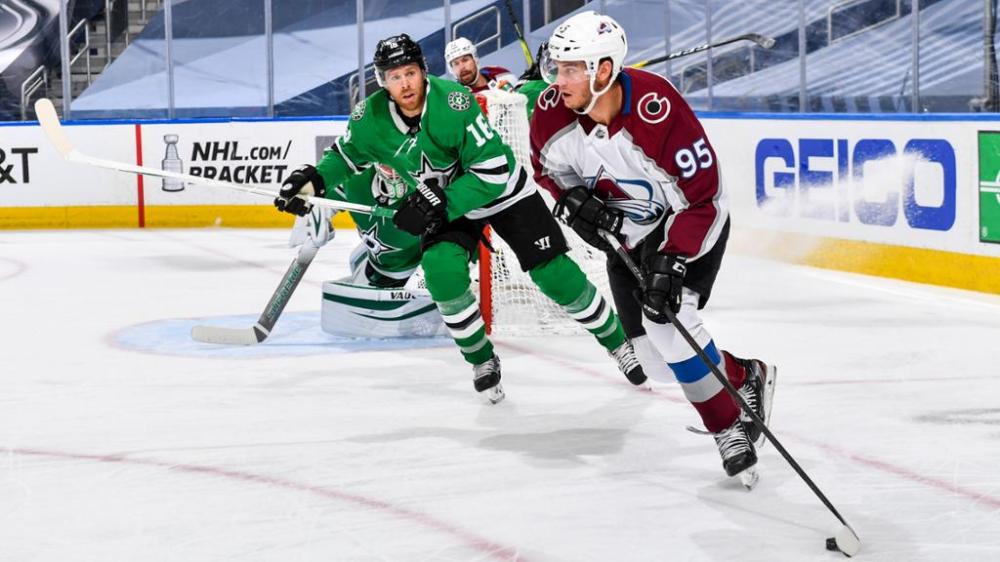 Are you Ready for Round 2?

Well, the National Hockey League threw us a curve ball by getting Round 2 of the 2020 Stanley Cup Playoffs a little quicker than in normal years, starting up in the Western Conference last night with second-seeded Colorado taking on No. 3 Dallas in Game 1 of their series. But after nailing six of eight first-round winners we still wanted to prep everyone for Round 2.

And no, Dallas’ somewhat surprising 5-3 victory in Game 1 will not change anything as Colorado is still going to be our pick to advance to the Western finals.

That said, the Stars are dangerous and on a roll.

After a sluggish 0-2 round-robin start in which they needed a last-minute goal by Joe Pavelski to force overtime in their final game – which they eventually won in overtime – against St. Louis as well as in their first-round series vs. Calgary, the Stars have scored 26 goals in their last seven contests. And they did most of that damage without much production from their top line.

That all changed last night, however, as Tyler Seguin, Jamie Benn and Alexander Radulov combined for 11 points, with Benn dishing out three assists, Radulov potting a pair of goals and Seguin setting the tone four minutes into the game. With Dallas’ top trio finally stepping up and Colorado now dealing with injuries to starting goalie Philipp Grubauer and steady defenseman Erik Johnson, things are definitely looking up in the Lonestar State.

A few games are not enough to change what has happened over the course of nearly 80 contests, however, and while the offensive firepower and depth that the Avalanche have is well documented and on prominent display every time they take the ice, Colorado also happens to be one of the top defensive teams in the NHL. Meanwhile, the Stars were one of the worst offensive teams during the regular season.

The loss of Grubauer, whose injury looked bad, doesn’t help the Avs, but he and Pavel Francouz have been neck-and-neck as 1A and 1B all year, with Francouz posting a 1.59 goals-against average and a .941 save percentage in three postseason appearances. Johnson also will be missed if he’s out for an extended period, but the Avs ranked sixth in the league in goals allowed per game this season at 2.71, not far behind Dallas’ 2.52, which ranked second.

Even without Johnson, who is a key penalty killer but skates on Colorado’s third defensive pairing with Nikita Zadorov, the Avs have a good mix of youth and veterans on the blue line in Calder Trophy-finalist Cale Makar, Sam Girard, Ian Cole and Ryan Graves.

Of course, they also scored the third-most goals in the league during the season and have tons of speed and skill up front with Nathan MacKinnon, Mikko Rantanen, Gabriel Landeskog, Nazem Kadri, Andre Buarkovsky and Joonas Donskoi leading the way. And don’t forget that they torched the league’s fourth-best defensive team in the first round, scoring 14 goals in the final two wins against Arizona.

If both players are healthy, Dallas does have two No. 1-caliber goaltenders in Anton Khudobin and Ben Bishop, and veteran leader Joe Pavelski has been outstanding at forward in the postseason. If Dallas can continue the offensive production, this series could come down to goaltending, but we’re going to stick with Colorado’s total team depth prevailing in seven hard-fought games.

The other Western Conference Round 2 matchup also will be fun to watch, featuring two high-tempo teams that play contrasting styles and have very different levels of postseason experience.

Top-seeded Vegas already faced one upstart, offensive-minded team, knocking off the Chicago Blackhawks in five games to advance to the second round. They will take on another young, explosive club in fifth-seeded Vancouver in Round 2.

Vancouver has size, speed and skill up front, but the Canucks got a huge lift late in their six-game victory against the defending-champion St. Louis Blues from depth players like Jay Beagle, who won a Stanley Cup in Washington in 2018 and opened the scoring in Game 6, and Tyler Motte, who scored three times in the last two games of the series.

While it’s debatable that those bottom-six guys will continue producing at that rate, don’t forget that Vancouver has top-six star-power in Elias Petterson, Bo Horvat, Brock Boeser and J.T. Miller. The Canucks to play a more wide-open style than any of the remaining teams, leaning on netminder Jacob Markstrom to turn aside an alarmingly high number of high-danger chances.

Markstrom has been outstanding so far and is tied for the lead in postseason wins with seven while also posting a 2.44 GAA and .929 save percentage. Calder Trophy-finalist Quinn Hughes anchors a solid defense that is not as deep as Vegas’ and would be helped by the return of veteran Tyler Myers, who is day to day with an undisclosed injury.

Vegas is a complete team that is fast and talented offensively, deep defensively and plays hard in all three zones. On top of that, most of its core players have the experience of a 2018 run to the Stanley Cup Finals. The Golden Knights forecheck hard and can play almost any style of game. They have six solid defensemen and a strong top six up front that features Mark Stone, Max Pacioretty, William Karlsson, Jonathan Marchessault, Reilly Smith and Paul Stastny.

Alex Tuch has been one of the Knights’ top playoff performers, and he’s on the third line. It’s proven that depth scoring is needed to go far in the postseason along with great goaltending. Vegas has two elite netminders in Robin Lehner and former Cup-winner Mark-Anrde Fleury.

The Golden Knights seem to have all their bases covered, so we will take them in six games here. Don’t sleep on the Canucks, though, as they will be a threat to win it all for the foreseeable future and could easily pull the upset in Round 2.

“They have a lot of different elements to their team,” Blackhawks head coach Jeremy Colliton told reporters after his team was eliminated by Vegas. “They have some offensive guys who are dangerous whenever they’re on the ice, but for the most part a lot of them play a tremendous two-way game, and that’s hard to play against.”

Moving on to the Eastern Conference, three of the top-four seeds also advanced, with only the sixth-seeded Islanders, who were dominant defensively in a five-game upset of No. 3 Washington, crashing the party. The East shouldn’t be as wide-open and fast-paced as the Western Conference games will be, but the matchups feature two of the league’s top-four regular-season teams – Boston and Tampa Bay – squaring off as well as Philadelphia, the NHL’s hottest team heading into the COVID shutdown.

Boston sleepwalked to the East’s fourth seed by looking uninspired in losing all three of its round-robin games. The Bruins didn’t appear to be much more energized in splitting their first two contests against Carolina in the opening round of the playoffs either. But they ramped up the intensity after starting goaltender and Vezina Trophy-finalist Tuuka Rask left the Toronto bubble to tend to family concerns at home.

The NHL’s top team during the regular season and a Stanley-cup finalist a year ago, the Bruins are universally considered the most complete team in the league with no real weaknesses, plenty of depth defensively and one of the NHL’s top first lines. The big question is if backup goalie Jaroslav Halak can take them to the promised land.

Boston was able to knock off a strong Carolina team despite playing without the services of David Pastrnak and Rask for a good portion of the series as players like David Krejci and Jake DeBrusk stepped up. That bodes well for the remainder of the postseason with the Bruins seemingly hitting their stride at the right time.

Like the Flyers, the Lighting were red hot when COVID-19 halted play in March. Tampa Bay ended up with the NHL’s fourth-best record after a slow start and came to Toronto looking to erase the memory of their 2019 playoff collapse.

The Lighting were workmanlike in earning the second seed during round-robin play and brought a lunch-pail mentality to their first-round series victory against a Columbus team that swept them a year ago.

The additions of Blake Coleman and Barclay Goodrow at the trade deadline give Tampa an edge and playoff mentality they have lacked in the past. The Bolts have a top six that includes 2019 MVP Nikita Kucherov and skilled speedster Brayden Point along with two-way players who can produce offensively such as Alex Killorn, Anthony Cirelli and Tyler Johnson. Yanni Gourde is a pest who adds more grit to the third line, and the defensive is anchored by perennial Norris-candidate Victor Hedman and last year’s Vezina-winner Andrei Vasilevskiy.

Imagine if Steven Stamkos, who is day to day, ever returns to the lineup. Either way, we think that head coach John Cooper finally has the right mix of skill and grit to take this team to the Finals. But we’re not getting ahead of ourselves. We’ll take the Bolts in seven in this one.

The other Eastern Conference series features the suffocating New York Islanders and the top-seeded Philadelphia Flyers. The Islanders showed that as a group they are willing to buy-in to head coach Barry Trotz’s defense-first system in knocking off the Capitals, while the Flyers earned their playoff stripes in a low-scoring, extremely physical six-game first-round victory against an up-and-coming Montreal club.

Don’t expect a lot of goals in this one. It should be a white-knuckle, hard-hitting, conservative battle to the wire. The Flyers clearly have more scoring punch up front, but that didn’t matter to the Islanders against Washington. Philadelphia is solid defensively with a responsible group of forwards and a younger, but talented defensive corps. Carter Hart is a budding superstar in net for the Flyers, but New York’s Semyon Varlamov was very solid against the Caps.

Are the Flyers ready to do this? Top-six players Claude Giroux, Jakub Voracek, Travis Konecny and Sean Couturier are going to have to find a way to be more productive, and James Van Riemsdyk will need to find his game.

Barry Trotz knows how to get the most from his players, and the 2018 Cup run is still fresh in his mind. We’ll take the Isles in seven.