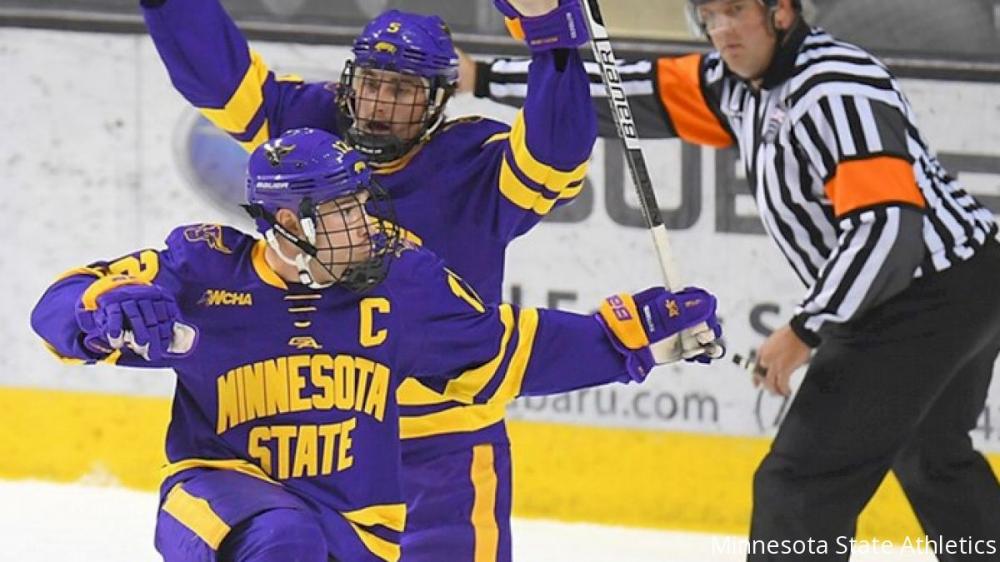 It will be the program with the most Frozen Four experience against a school with the least Monday night at Little Caesar’s Arena in Detroit when Boston College takes on Minnesota State for the NCAA Division I men’s hockey championship.

BC, which is making its 26th Frozen Four appearance, entered the national semifinals as an underdog this year, but managed to “upset” top-seeded North Dakota, 4-3, in an overtime thriller Saturday, while a balanced Minnesota State squad earned its first trip to the title game with a methodical 3-2 win over a Cornell team that finished the year ranked No. 1 in the non-computerized Division I polls.

The Mavericks, playing in the national semifinals for the first time in program history, have endured much heartbreak and disappointment under head coach Mike Hastings, who twice has seen his team knocked out as a No. 1 seed in the tournament’s opening round. But this year’s club is different.

Minnesota State entered the postseason with the second-most prolific offense of any tournament team, averaging 4.02 goals per game compared to BC’s 4.05, but also with the tournament’s stingiest defense. The Mavericks allowed just 1.5 goals per contest this season, compared to the second-ranked defensive team and Saturday’s opponent, Cornell, which allowed 1.6.

The Mavericks potent and deep offense had been on display leading up to the Frozen Four.  They notched a pair of 5-2 wins, with their 10 total goals ranking first among all the semifinalists. But Saturday they faced an equally solid defensive team and one of the nation’s top goaltenders in Richter Award-finalist Matthew Galajda.

Minnesota State’s extra offensive punch, combined with sophomore netminder Dylan McKay and his 1.31 goals-against average, proved to be a little too much for Cornell to handle. The Mavericks controlled the game throughout, holding the Big Red to a single goal until the final two minutes, and never appeared to be in jeopardy even as the margin inched to within one.

“It really was a solid all-around effort from our entire team,” Hastings said. “We knew that goals would be hard to come by for either team tonight with two very strong defensive teams and two of the top-five goalies in the nation facing each other. I felt like we had a little bit more strength up front and thought that if we could get three goals we would be in pretty good shape. We did that, and Dylan shut the door.”

McKay, also a Richter Award and Hobey Baker finalist, teamed up with MSU’s other Hobey Baker finalist, forward Marc Michaelis, to spell trouble for Cornell. McKay stopped 25 of the first 26 shots he faced, while Michaelis continued to build his case for tournament Most Outstanding Player honors with a goal and an assist to bring his tournament totals to five goals and four helpers in three outings.

“Those two guys have been big for us all year, and this is the third-straight game that I’ve said you need your stars to play like stars to win this time of year,” Hastings said.

Amazingly, the Mavericks held Cornell without a shot after Morgan Barron cut the lead to 3-2 with 1:52 remaining in the third period. Minnesota State continued its aggressive forecheck after that tally, bottling up the Big Red and not allowing them to remove the goalie for an extra attacker until fewer than 30 seconds remained.

“It’s tough to come this far and lose,” Big Red head coach Mike Schafer said, “but there’s no shame in losing to what I believe to be the most well-rounded team in the field. It’s one thing to say, ‘Hey, we have to shut down their top guys to win this thing,’ but you still have to find a way to score goals against one of the best defensive teams and goalies in the Division I. They played great and deserved to win, and that doesn’t take anything away from our season.”

While the night’s opening contest didn’t feature too many fireworks, a thrilling nightcap more than made up for that, with Boston College earning a hard-fought victory on Logan Hutsko’s goal at 11:39 of overtime.

BC and North Dakota combined for four goals in the opening 20 minutes, none in the second period and two in the final six minutes of regulation – with the Fighting Hawks forcing OT on Collin Adams’ rebound goal with 1:07 left and goaltender Adam Scheel pulled for an extra attacker.

“When a talented, veteran team like that is throwing everything they have at you with their season – and for some, their careers – on the line, it’s very hard to hold them off,” Eagles head coach Jerry York said. “It was almost better that the goal didn’t come in the final 20 seconds or something like that, because then I think you have a real issue trying to get your guys to move on and be mentally prepared for overtime after coming that close to winning.

Hobey Baker-finalist Jordan Kawaguchi, of course, started the game-tying sequence by possessing the puck behind the goal and patiently moving side to side, looking for any opening, before bouncing an indirect pass to Jacob Bernard-Docker at the point. Bernard-Docker walked toward the middle with his head up and wristed a sneaky shot through several bodies and all the way to chest of BC goalie Spencer Knight.

It looked like Knight didn’t expect the puck to get through, so he wasn’t able to curl up and corral the rebound. The puck bounced over several sticks and onto the blade of the ever-present Adams, who continued to be North Dakota’s Mr. Clutch by sweeping the puck into the unguarded net in one motion.

Exasperated Eagles fans slumped into their seats, while the Fighting Hawk faithful went from prayers to cheers as the red light switched on, signifying a tie game.

“Jordan makes that whole play happen by just being his calm, patient self there behind the net,” Adams said. “With all those bodies in front, to not force it and get the puck out to the point was such a smart play. And Jake didn’t just wind up and blast it. He found a way to get a shot through. I did the easy part.”

Adams, who led North Dakota with six game-winning goals during the regular season, had has teammates and the team’s fans thinking he would be the likely hero again in the extra session.

But Boston College’s own Mr. Clutch would have something to say about that.

Hutsko also had come up big in key situations for his team throughout the year, netting four game-winners heading into the postseason and tying for the team overall lead with 19 goals. After a tense opening 10 minutes of the extra frame, the Eagles kept possession of the puck in the North Dakota end for more than a minute before the deciding score.

“Any time you get into an overtime situation and the other team can hold the puck in your zone that long it really wears you down,” North Dakota head coach Brad Berry said. “You’re just hoping for them to make a mistake with it so you can get a clear and get a change, but that just never happened. Hats off to them. It was a great hockey game."

As the pressure mounted, the Fighting Hawks collapsed more and more, trying to conserve their energy by shutting down the shooting lanes and not having to move as much. But the Eagles took advantage, whipping the puck around and creating just enough of an opening in the high slot for Hutsko to slide in, take a quick pass from Julius Mattila and fire it past Scheel low on the stick side.

“We had the puck a long time, but they weren’t giving us much to work with,” Hutsko said. “The guys were really patient and that allowed me to find a little space to get open for a pass and shot. It all had to be very quick. I really didn’t even think or aim I just wanted to get a shot off before they all got on top of me. It was pretty lucky, really, but I’ll take it.”

Hutsko’s winner capped off what literally was a back-and-forth affair. BC opened the scoring, and the two teams traded tallies all night in a memorable last-goal-wins thriller.

“I know they are devastated,” York said. “But what an incredible hockey game. These types of games are why you play. We’ve been on the short end of our share of these and won a few, too. I commend coach Berry and his kids on a great effort and a great year. It’s tough for them now, but this is a game they will look back on years from now and be proud to say they were part of it.”

The goal-trading started early in the first period.

BC’s previous tournament hero, Aapeli Rasanen, got the Eagles on the board first with a power-play maker 7:22 into the contest, and Shane Pinto answered for North Dakota slightly more than three minutes later.

Boston College’s David Cotton went next, with Fighting Hawks d-man Colton Poolman providing the answer for a 2-2 score after one. A scoreless second period was followed by Graham McPhee’s short-handed marker 14:01 into the third period, setting the stage for the dramatic finish in regulation and overtime.

When the final dust had settled, North Dakota held a 31-27 shots advantage, but BC led in the category that mattered most.

The Fighting Haws concluded their season with a record of 28-6-4, while Cornell finished 25-3-4.

“It’s a tough one to swallow,” Berry said, “just because the effort tonight – and all year long – was so high. This team really competes. Even on that last shift when we were exhausted, guys were doing everything in their power to keep the puck out of the net. That’s all you can ever ask.”