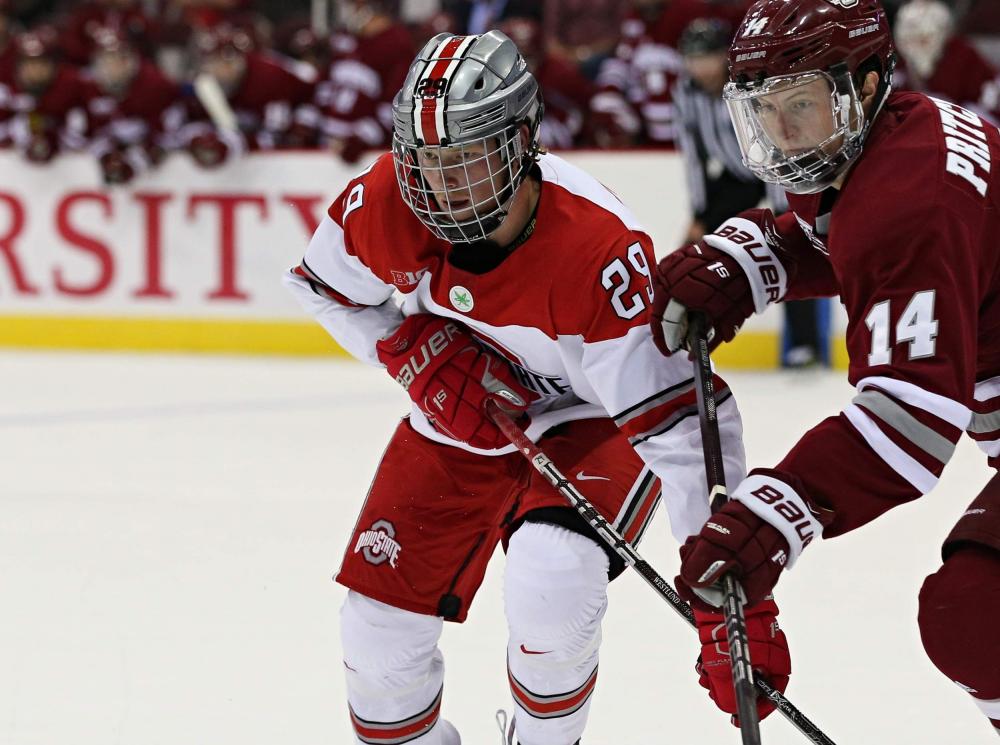 Goat to hero and hero to goat; it’s amazing how often one of those scenarios plays out in high-level sports pressure situations. Friday night it was the former, and Ohio State sophomore forward Gustaf Westlund played the role to perfection.

First, he watched helplessly from the penalty box as the nation’s leading goal-scorer tied the game for UMass in the waning moments of regulation. Then, about 20 minutes later, he found himself on the bottom of a celebratory dogpile after netting the overtime game-winner.

The Swede plunked home the rebound of defenseman Wyatt Ege’s point shot 4 minutes, 21 seconds into the extra period to push the third-seeded Buckeyes past second-seeded UMass and into the New York Regional final of the NCAA Division I Men’s Hockey Championship at the Times Union Center in Albany, N.Y.

The win was the first of the tournament for a lower-seeded team. Ohio State faces top-seeded Cornell for the right to play in the Frozen Four April 13 at the Times Union Center.

“You play hard and things happen out there, but you never want to let your teammates down,” Westlund said of his third-period penalty. “You feel bad in the locker room and don’t want to look at anybody. But the guys were good and told me to go out and make up for it. I wanted to for sure, but never really believed it could happen like that.”

The smile on Westlund’s face indicated he was thrilled that it did.

Ohio State, which didn’t rank among the nation’s top 35 in penalty killing on the season at 80.8 percent efficiency, had managed to keep a UMass power play that had converted only 12.3 percent of the time off the board in its first four opportunities. But the Buckeyes weren’t going to keep the Minutemen and national goal-scoring leader John Leonard off the board a fifth time.

Westlund was sent off for interference with 2:12 left in regulation, and with goalie Matt Murray pulled for an extra attacker, UMass swarmed his Ohio State counterpart Tommy Napier for the next 1:18 before Leonard finally one-timed a feed from freshman Zac Jones into the net with Napier and several teammates sprawled on the ice trying desperately to hang on to the one-goal lead.

Jones had just fired a one-timer of his own as the puck trickled out to him at center point with several Buckeyes selling out to clog the shooting lane. His blast hit a player in front and bounced right back onto his stick. Then, without hesitation he slid a quick no-look pass to the top of the right-wing faceoff circle where Leonard blasted home his 28th of the season, sending the UMass bench and partisan crowd into hysterics.

“What a play by a freshman,” Minutemen head coach Greg Carvel said when asked about Jones’ pass. “I probably wasn’t thrilled with his first shot, but it’s late and you’re just trying to get something to the net for a tip or rebound. To react that quickly to a blocked shot and without looking know where the most dangerous guy on the ice is and put it right on his tape is just an unbelievable play. You can’t teach plays like that.”

Leonard’s goal certainly changed the face of a game in which Ohio State set a physical tone in the defensive zone throughout the night to frustrate UMass. The buckeyes eliminated chances by closing off shooting lanes and boxing out forwards looking for second-chance opportunities.

As the players left the ice to prepare for overtime, the Minutemen were pumping up a raucous group of fans that needed no encouragement while the Buckeyes plodded off with heads down and shoulders slumped.

“You just kind of feel helpless as a coach when that happens,” Ohio State head coach Steve Rohlik said. “All you can think about is what you can say to help them get past what happened and realize that they had played great and that it was still anyone’s game. You could hear the UMass players and the crowd whooping it up, so all I said was ‘If we stay the course, that will be us in a few minutes.’”

“Talk about a kid who played his heart out,” Rohlik said. “I felt sick to my stomach that he had to watch them tie the game from the penalty box. It felt like a little poetic justice for him to score the winner.”

Senior forward Tanner Laczynksi factored into Ohio State’s first two goals, tying the game at one in the first period and setting up Quinn Preston’s 16th of the year in the second. Those two points brought Laczyinkski’s team-leading season total to 36.

UMass, which finished with 37 shots, scored early and late, with junior Mitchell Chaffee breaking a seven-game pointless streak off a pass from Leonard 7:19 into the game for his 16th of the year.