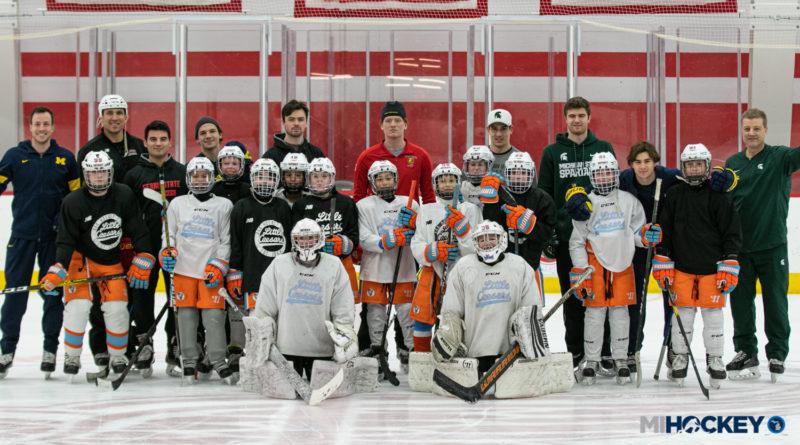 Here are your Week 18 top matchups. It’s a big weekend for the 2008 PeeWee Minor age group as fifth-ranked Little Caesar’s will be hosting many of the top teams in North America for the Little Caesar’s North American Invitational in Michigan. Highly ranked teams competing in the NAI include:

Most of this week's matchups come from that event:

Neighboring fifth-ranked teams from Michigan and Ontario face off as host Little Caesar’s takes on the Elgin Middlesex Chiefs in the Little Caesar’s North American Invitational in Detroit. These two teams met Dec. 1 in Canada, with the Chiefs skating to a 4-0 victory. LC brings an overall record of 32-9-3 into the weekend, having outscored its opponents, 265-72. They are unbeaten in their last 13 games (12-0-1) dating that Dec. 1 loss., which came on the heels of a seven-game winning streak, making them 18-1-1 in their last 20. That red-hot 20-game streak followed up a three-game losing skid, with the losses coming against No. 4 Honeybaked (2-1) and the second-ranked Chicago Fury (3-2 and 4-1). The Chiefs are 44-3-1 and have outscored the opposition, 255-70. They also are 18-1-1 in their last 20, with the loss coming against USA No. 15 Anaheim Jr. Ducks by a 3-2 margin Jan. 18 and the tie vs. Ontario No. 22 Lambton Jr. Sting Dec. 8. Their other two setbacks came against USA No. 10 Minuteman Chiefs Nov. 30 and Ontario No. 1 Toronto Jr. Canadiens Nov. 3.

USA’s second-ranked Chicago Fury and Ontario’s No. 4 Barrie Colts meet on the first day of the Little Caesar’s North American Invitational in Detroit. These two teams met Oct. 6 in Ontario, with the Fury earning a 2-1 victory. Chicago comes into the weekend with a 46-4-2 overall record and having outscored its opponents, 239-63. The Fury have won five straight games, with all of those victories coming against Canadian teams ranked between No. 18 and 55 in Ontario. Chicago’s last loss was a 2-1 setback against USA No. 3 Team Illinois Jan. 12. That loss ended another five-game unbeaten streak (4-0-1) following a 2-1 loss to the 12th-ranked Chicago Mission Dec. 21. Prior to the Dec. 21 game the Fury had gone six games without allowing a goal, had allowed one goal over an eight-game span and had given up two goals in nine contests. Chicago’s other two losses came against No. 4 Honeybaked and Ontario No. 15 Mississauga Rebels. Barrie is 49-3-1 overall, with the only losses coming against the Fury and Ontario’s 10th-ranked Peterborough Petes. Ironically, one of those losses was in the Colts’ last game, 3-1 to the Petes Jan. 26. Prior to that they had won 13 straight since the other loss to the Petes, 2-1, Dec. 1. Barrie has outscored its opponents, 318-106.

It’s an all-USA battle at the Little Caesar’s North American Invitational in Detroit. Mid-Fairfield brings its top ranking and a 41-3-3 record into the contest, while the Mission come into the event with a 19-16-6 mark and having played the toughest schedule in the country. This is the first meeting of the year for these two teams, but the Mission have gone 1-4 against the tournament field, with the victory coming by a 2-1 margin against the No. 2 Chicago Fury Dec. 21. They have outscored their opponents, 143-116, and are 5-3-2 in their last 10 outings. Mid-Fairfield has outscored its foes, 273-70, and has only lost to Ontario’s top-ranked Toronto Jr. Canadiens, USA No. 4 Honeybaked and USA No. 16 Middlesex Islanders. The only other team the Jr. Rangers have played from the invitational field is the Boston Jr. Eagles. They went 1-0-1 against Boston in games that were played way back in September. Mid-Fairfield had won 10 straight games leading up to their 6-2 loss to the Jr. Canadiens Jan. 22.

It’s an all-Ontario top-five matchup at the Little Caesar’s North American Invitational in Detroit. These two teams are meeting for the first time this season, with Vaughan coming into the tourney at 40-3-4 and Barrie at 49-3-1. The Kings have outscored the opposition, 221-63, this year, have won five straight and are unbeaten in their last six since a 5-2 loss to Ontario’s top-ranked Toronto Jr. Canadiens Jan. 5. Vaughan has allowed just a single goal in each game of the six-game unbeaten string, which began with a 1-1 tie against Ontario No. 2 Toronto Marlboros. All three of the Kings’ losses this year have been against the top-ranked Jr. Canadiens. They also own a 3-2 victory over the Jr. Canadiens and skated to a 1-1 tie against them while earning a 4-2 win vs. the No. 2 Marlboros Nov. 8. Barrie is 49-3-1 overall, with the only losses coming against USA No. 2 Chicago Fury and Ontario’s 10th-ranked Peterborough Petes. Ironically, one of those losses was in the Colts’ last game, 3-1 to the Petes Jan. 26. Prior to that they had won 13 straight since the other loss to the Petes, 2-1, Dec. 1. Barrie has outscored its opponents, 318-106.

It’s an important NEGHL matchup as the fourth-ranked and third-place Wizards take on the No. 11 and fifth-place Breakers. The Wizards are 5-0-0 in league play but trail Assabet Valley and the Mass. Spitfires in points because of having played fewer games. Bay State is 3-5-1 in the NEGHL and looing to make up ground on the fourth-place Mid-Fairfield Stars (5-3-0). Overall, East Coast is 30-13-0 and has outscored its opponents, 158-72. The Wizards lost their most recent game, 2-0, to the No. 3 Mass. Spitfires, and are 10-2 in their last 12 contests. They faced the Breakers Jan. 20 and skated off with a 5-1 victory to improve their mark against Bay State to 4-0 on the year. Bay State is 13-18-4 overall against a difficult schedule. The Breakers are 6-4 in their last 10 outings with wins against No. 6 Little Caesar’s and No. 7 Team Illinois.

Top teams from the PCAHA and OMAHA face off as the Falcons and Rockets hit the ice in Surrey. This is the third meeting between these two clubs this year, with the teams having split a pair of early season games. Surrey skated away with a 4-2 decision Oct. 11, and Kelowna won the rematch, 7-6, just three days later. For the Falcons, that was one of just three losses thus far on the season. They bring 34-3-0 record and an 18-game winning streak since their last loss, a 4-3 decision against the No. 44 Tri-Cities Predators Nov. 23, In addition to the loss to Kelowna, Surrey’s only other defeat came on Nov. 21 against No. 27 St. Boniface. The Falcons have outscored their opponents, 307-58. Kelowna is 20-15-1 overall and has outscored its foes, 174-133.  The Rockets have lost three straight outings on the heels of a three-game winning streak and are 9-11 in their last 20 contests.