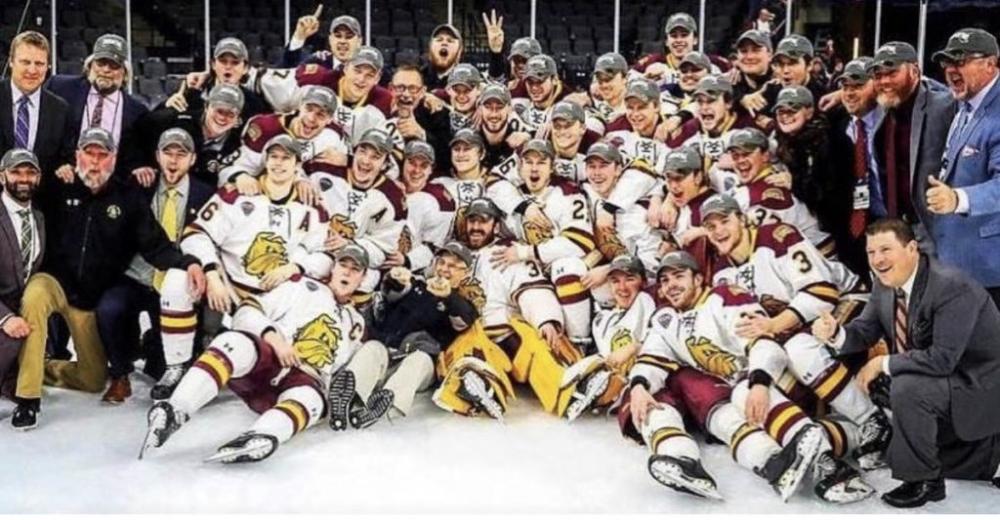 You know times have changed in men’s Division I college hockey when Dave Starman calls traditional national-power Boston College an under-the-radar team as the 2019-20 season gets underway.

“It’s very unique to say that B.C. is under the radar,” said Starman, the voice of college hockey for CBS Sports Network, the longtime color analyst on World Junior Championship telecasts and one of the foremost authorities on the college game, “but I expect them to have a rebound season. With the personnel they brought in and the players coming back, they should have a nice, solid team. They may not be as strong as some of the great BC teams of the past, but they should be a really good fundamental team.”

Not as strong as some of the great teams of the past sums up where many of the “bluebloods” of college hockey, as Starman calls them, find themselves these days. A quick look at the various preseason polls shows that the consensus top six or seven teams includes programs such as last year’s NCAA finalists, Minnesota Duluth and Massachusetts, along with Denver, Minnesota State, Cornell, Providence and St. Cloud State.

Those who follow the college game closely realize that these are all great hockey schools with traditions of success, but they are not the big names that dominated the sport for so long. Boston College received a few mentions among that top group from preseason prognosticators this fall, but the Eagles weren’t a consensus pick. And where are Boston University, Michigan State, Michigan, Wisconsin and Minnesota – the big-name, big-budget hockey programs from big-time conferences?

A quick glance shows Wisconsin in the mid-teens, with Minnesota checking in at around No. 20 followed by Boston U. in the early 20s and Michigan in the mid-20s. You have to delve even deeper to find once-powerful Michigan State.

The preseason polls are simply an extension of what has taken place at the Division I level the past several years. In addition to UMass and UMD, last year’s Frozen Four included Providence and Denver. Add Cinderella-story American International, Cornell, Quinnipiac and Notre Dame to get the remainder of last year’s Final Eight, with none of the “bluebloods” mentioned previously even qualifying for the postseason.

It was a little different in 2018, as Michigan did manage to crash the Frozen Four party along with Notre Dame and Ohio State, three teams from Power Five athletic programs. While Notre Dame and OSU have solid hockey histories, they usually aren’t mentioned in the same breath as the traditional hockey powerhouses. The Irish have reached the Frozen Four in two of the past three seasons, though, so they are making a strong case to be included among that group.

UMD came away with the title again that year, and a look around the tournament field shows that Boston U. advanced to the quarterfinals, but none of the other big dogs even showed up to dance.

In 2017 your Frozen Four was Harvard, Notre Dame, Denver and UMD, with Denver knocking off the Bulldogs in a thrilling final. Taking a tournament roll call that year: Michigan? No.Michigan State? No. Minnesota? Yes! But the Gophers lost to Notre Dame in the opening round. Wisconsin? No? B.C.? No. BU? Yes! But the Terriers fell to UMD in the quarters.

Even North Dakota, not a Power Five school, but traditionally one of Division I hockey’s national powerhouses, has only surfaced in the postseason once in the past three years (2017). Instead, the names that we see advancing consistently are Notre Dame, UMD, Denver, Cornell and Providence.

Starman thinks the changing of the guard is primarily a result of the bigger-name schools being willing to bring in the younger NHL prospects who are likely to bolt before their four years are completed, while the programs that have realized more success recently fill their rosters with older players who develop later and stick around longer.

“There’s a real divide between the young guns at the brand-name schools and the more veteran teams on the other side, which over the past few years is where the success has been,” he said. “It’s really amazing the pasting that the bluebloods have taken the last three years. There really are two different schools of thought. You have the brand names bringing in the very best players who are not likely to stay for four years. They compile very high-skilled teams with players who are going to play in the NHL and are itching to get there, so they arrive with one foot in and one foot out. I think those teams struggle to build the cohesive culture that UMD, St. Cloud and Denver do.”

The emergence of newer programs such as Penn State and Arizona State may be changing the landscape of college hockey as well. Penn State, which began play at the D1 level in 2012, made a splash immediately with its amazing new home rink and some signature wins against top programs. Within five years, the Nittany Lions had captured a Big Ten Tournament title and won an NCAA Tournament game. PSU enters this season as a top-10 contender.

Arizona State, on the other hand, doesn’t have an amazing arena on campus or a powerful conference to play in. They also play in the desert, hardly ideal conditions to build a hockey program. Despite the obstacles, in 2019 Sun Devils became the fastest program in college hockey history to transition to the Division I level and advance to the NCAA Tournament. They did so as an independent in just their third season of D1 play, falling to Quinnipiac, 2-1, in the opening round.

“The two most recent additions to D1 hockey both brought with them a brand name, a big-time football program and a long history of being well known in athletics on the national landscape,” Starman said. “The difference is that Penn State knew it was eventually going to be in the Big Ten, so they were able to market that along with a great building and a great tradition of athletic success in Happy Valley. It was, ‘We’re going to play Michigan and Michigan State and be on the Big Ten Network with a great TV contract. Let’s Go!’

“For ASU it was completely different. They play in rink that most youth teams wouldn’t want to play in. They do get to play some games at the Coyotes arena, which is great but doesn’t draw well. They were able to build on their successful club days like Penn State, but as an independent may be showing other schools that are considering starting programs a different path. They get to play who they want when they want, and last year showed that they could build the strength of schedule necessary to make the tournament taking that approach.”

Arizona State and Alabama-Huntsville are the only Division I programs considered to be part of the “Sun Belt,” but Omaha also is located in an area that is considered a non-traditional market. While there are fears about the future of the two D1 programs in Alaska (Alaska-Anchorage and Alaska-Fairbanks), the success of ASU and Penn State – as well as the growing popularity of hockey in non-traditional markets – has several other athletic departments looking at the possibility of adding hockey.

That possibility, along with the continued expansion of hockey at the NCAA Division III level, means more opportunities for young players who have the goal of playing collegiately. Combine the sport’s growth with the possibility that so many of the nation’s 60 D1 programs can realistically compete for a national title in a given year, and these are exciting times for NCAA hockey.

“There are already a lot of really good players out there playing at the Division I level,” Starman said. “Illinois and some other schools – at least three or four of them – are talking about the possibility of starting Division I programs. I wouldn’t be surprised to see three or four more teams in the near future, and I think that it will continue to grow. Hopefully the Division III side continues to grow, too, because there are a lot of really good players out there that make the Division III level a great product as well.