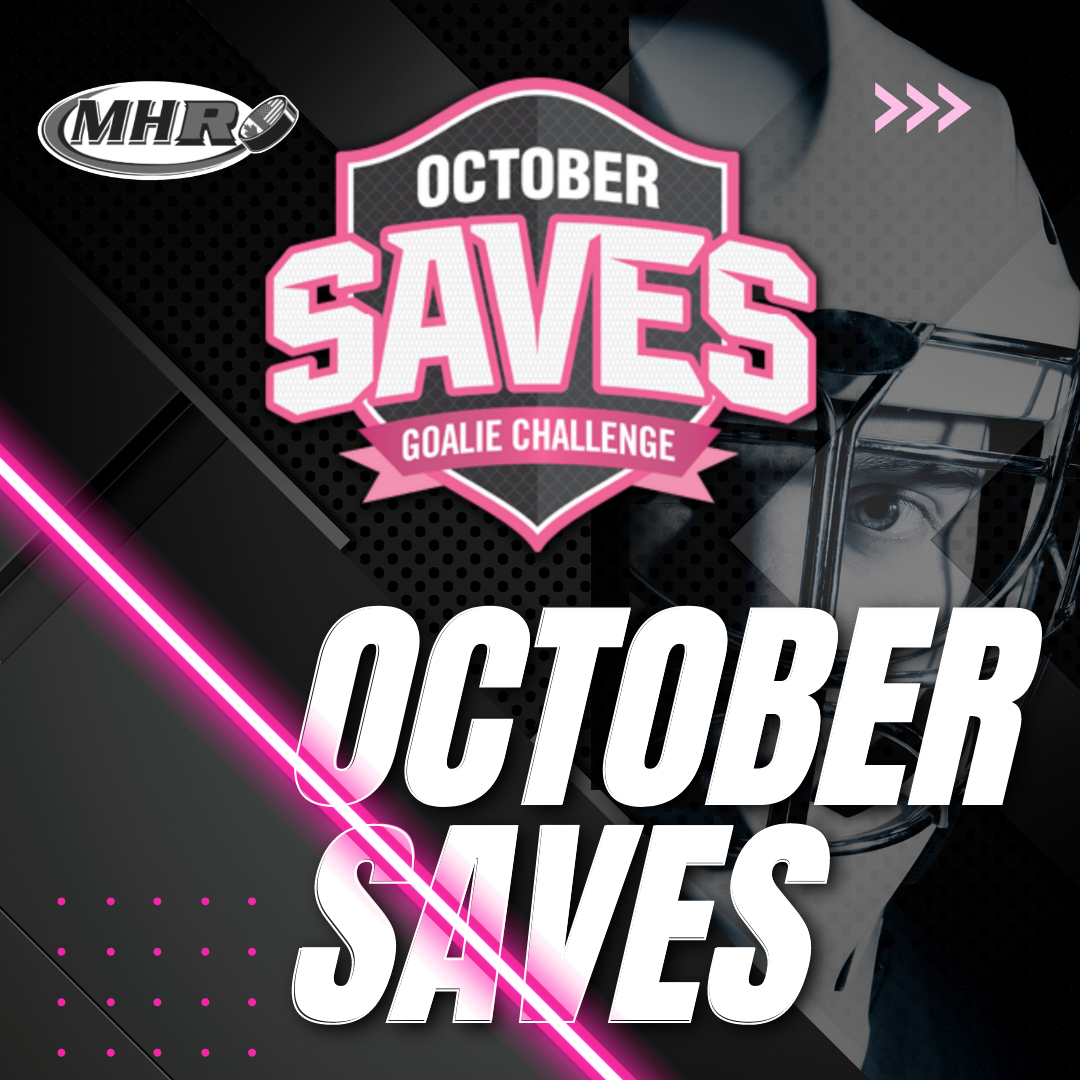 For most people, the onset of October conjures up thoughts of pumpkin spice, sweater weather, Halloween and fall colors. That's not the case for North American hockey famiiles, though.

Those of us who are not new to the sport and have been hanging around ice rinks most weekends for at least a few years know that it's almost October Saves time.

October Saves has raised more than $2 million in support of the fight against breast cancer since officially becoming a non-profit organization in 2017, and as this year's Oct. 1 start date looms, the organization is looking to exceed last year's high-water mark of $620,000.

"Last year we were able to add the Dana Farber Cancer Institute as one of our beneficiaries," Octobrer Saves founder Lara Hopewell said. "That really motivated our goalies in New England. They are an amazing cancer reserach center, so we were beyond psyched to donate to them."

The Farber Institue's well-known Jimmy Fund joined other similar programs in beneftting from the efforts of hockey goalies all over North America. October Saves also is aligned with organizations in the United States such as the Invoa Schar Cancer Institute in Virginia, Children’s Hospital of Philadelphia and Stand Up to Cancer. In Canada, the organization partners with Children’s Hospital of Eastern Ontario, which funnels funds to reputable organizations all over the country.

Some changes to the program made out of necessity when many rinks were shut down and seasons were delayed during the COVID-19 outbreak have helped take October Saves beyond the $500,000 fundraishing threshold annually and become permanent components of the organization's fundraising efforts.

In 2020, many teams were not able to pratcie or play games in October because of local restrictions, and amateur hockey was pretty much shut down all over Canada. Hopewell initially adopted an "it is what it is" approach and figured she wouild be happy with any amount of money the program could raise that year. But where there's a will, there's a way, and all it took was a little creativity to maintain the momentum October Saves had built.

Thanks to an "All Saves, One Goal" campaign, October Saves was able to raise more than $400,000 that year and then eclipse the $600,000 mark in 2021. "All Saves, One Goal" simply means that any save made by any goalie anywhere during the month of October counts toward the fudraising efforts. Whether goalies are playing street hockey with their friends, practicing, playing in organized games or in front of their TVs playing video games, any time they stop a puck they are helping fight breast cancer.

“We honestly had no idea what to expect, so we didn't set a number for 2020,” she said. “In our minds, any dollar amount would have been amazing, and our beneficiaries would have been thrilled to receive anything. To raise the second-highest yearly total in our history during a pandemic was amazing. We definitely attribute the success to the ‘All Saves, One Goal’ campaign, which removed all barriers to making saves for our participants and their families. As we know, goalies are a resilient, fearless bunch and boy did they prove it.”

Keeping the "All Saves, One Goal" approach in place also has allowed goalies in areas of the country where games don't start until November to participate. That means tenders in the United States hockey hotbed of Minnesota and New England Prep School goalies are able to partcipate.

“'All Saves, One Goal' is here to stay," Hopewell said. “It was so successful that first year and it allows more players to participate, so why not? We love our NHL video-gamer army who have showed up in force, too."

October Saves has partnered with The Goalie Guild and Goalie Guild Gaming the past two years, which has helped keep the Egoalie donations flowing. Goalie Guild Gaming is a non-profit organization dedicated to supporting the growth of NHL Esports by “offering education, training, and mentoring opportunities for goalies of all ages and levels.”

A longtime supporter of the October Saves program, The Goalie Guild has held an online streaming event on Twitch to benefit October Saves and coincide with the annual launch of EA Sports’ NHL video game. Gamers anywhere have been afforded the opportunity to count virtual saves toward their fundraising goals.

Started in 2014 with all 28 of the goalies in the Ashburn (Va.) Xtreme youth hockey program participating, October saves expanded into Canada four years ago and has continued growing since then. That first year, Ashburn’s goalies raised $32,000 on their own.

The numbers improved substantially in year two, with NHL goaltending coach Mitch Korn donating a spot in one of his goalie camps as a prize, and eventually the Chesapeake Bay Hockey League, which includes pretty much all Tier 2 youth travel programs in Maryland, D.C. and Virginia, began supporting the program. Then USA Hockey got on board.

The addition of new prizes for the top fundraisers every year along with the the ability for clubs to support their goalies’ fundraising efforts also has helped grow the numbers. The addition of the Farber Institute's well-known Jimmy Fund as a beneficiary provided a big boost last year.

"We know that many of our fundraisers in New England are personally inspired to fundraise for the Jimmy Fund," Hopewell said.

Keeping the program fresh by adding creative twists and new, exciting prizes annually while also making it incredibly easy for goalies to participate has been key to October Saves' growth and success.The program provides a fully functional website that allows participants to promote their efforts and manages their donations for them.

Last year, October Saves made it even easier for goalies to raise money by allowing their clubs to fundraise with them. Clubs were given the ability to register their organization and add their registered goalies, and October Saves tracked club fundraising efforts on its webstie. The top-fundraising organization was awarded a Sense Arena Virtual Goaltending Training System along with a one-year prorgramming subscription.

That prize, valued at $3,000, is one of many ways goalies and clubs are incentivized to participate in the fundraiser. Clubs interested in participating can click on this link for the October Saves website and scroll through a video that walks them through the registration process on the home page.

“As we all know, it’s more exciting to fundraise together,” Hopewell said.

The creative approach continues in 2022.

"This year we have two special changes," Hopewell said. "We have renamed our Mitch Korn Camp Scholarship in honor of Charlie Capalbo, who was an incredible young goalie who lost his fight to cancer last year.  He fought cancer multiple times. He was a dedicated goalie and worked for Mitch's camps. Mitch grew very close to the family and we are very excited to offer this scholarship. We are also awarding a training scholarship this October to a participant whose family is dealing with a cancer diagnosis."

Other prizes have included a pair of True goalie skates for the top fundraiser along with leg pads, a goalie mask, a glove and blocker and a stick for other top producers. Additional prizes also are awarded automatically whenever goalies surpass certain fundraising thresholds.

"We have continued to increas the number of prizes and add to the fundraising-milestone prizes, so there are more opportunities for everyone to be rewarded for their amazing efforts," Hopewell said.

The top fundraiser in 2021 was Keegan Groom, who raised more than $20,000. Keegan's mom, Kelly, was an October Saves volunteer for several years who helped promote the program in New York while fighting cancer twice. Kelly passed away during last year's campaign, but the family continued to raise money in her honor.

"It was an emotional and special experience to work with this sweet family and watch them channel their grief into something Kelly believed in," Hopewell said.

The number of touching stories the October Saves program brings to light every year and the fervor with which the North American hockey community rallies behind such an important cause make the program special and unique.

Traci and Ike Cole are another touching story that came out of last year's campaign. At the time, Ike was a goalie playing in the Ashburn, Va., program whose mom, Traci, successfully fought both breast and then colon cancer. She finished her treatment for colon cancer right before October Saves, and Ike raised more than $15,000 in her honor. You can read more about them here.

October Saves runs throughout the month of October, which is Breast Cancer Awareness Month, and there still is plenty of time to sign up.

Anyone interested in participating can register and find out more by CLICKING HERE.