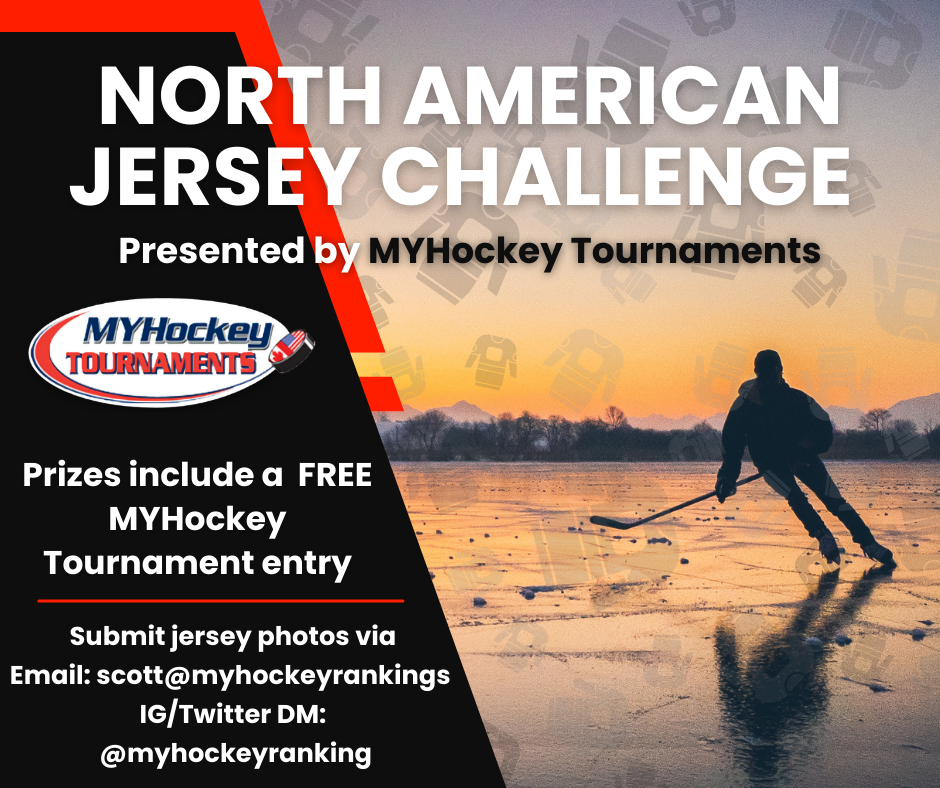 One of the best things about walking into a facility that has multiple ice rinks during a large youth hockey tournament is the flood of colors you see on and off the ice. It’s so much fun to cruise around and check out the cool jerseys representing clubs from all over North America.

No matter how big or small a tournament might be, many of us like to pick out our favorite jerseys and maybe steal a few ideas to use for our own jerseys in the future.

But have you ever wondered which club or team has the coolest jerseys in all of North America? Well, we’re about to find out!

MYHockey Rankings is excited to announce that this summer we will determine once and for all which youth/minor hockey club or team has the best jersey in North America. Starting in early July we will be holding the North American Jersey Challenge.

Presented by MYHockey Tournaments, the North American Jersey Challenge will be a bracket-style contest featuring online voting on the @MYHockeyRanking Instagram account. It will be promoted via all of MHR’s social media platforms, with boys’ and girls’ youth and minor hockey clubs and teams from the United States and Canada eligible to participate.

MYHockey Tournaments will be providing a free spot in one of its 2022-23 tournaments for the winner, with MYHockey Rankings contributing a free 2022-23 club membership to the runner-up.

“We held a similar contest to determine the best amateur hockey logo in North America not long ago, and it was a huge success,” MYHockey Rankings Director Ian Lodin said. “We did that when many clubs and organizations were shut down because of COVID, and it really created a lot of interested and excitement around youth and minor hockey at a time when there just wasn’t much going on. It’s our hope that following up that contest with a jersey challenge will generate a similar level of excitement and interest during hockey’s summer downtime.”

The Canadian bracket will be announced on Canada Day, July 1, while the United States bracket will be unveiled on July 4, U.S. Independence Day. Submissions will be accepted throughout the month of June.

Clubs and teams around North America are encouraged to submit their entries starting immediately. Teams can submit staged or action photos via email to scott@myhockeyrankings.com or by direct message to @myhockeyranking on Twitter or Instagram.

To be considered for the contest, all photos – including action shots – must show as much of the front of the jersey as possible with the logo clearly depicted. If clubs or teams want to have more of the jersey than just the front considered, they should submit just one photo that depicts everything they would like to have judged. Hanging two jerseys so the front and back can be viewed in one photo – or showing the front, back and a sleeve or a similar angle – would be appropriate and accepted. PLEASE ONLY SUBMIT ONE PHOTO!

Clubs having multiple jerseys or teams within their organization that have their own “secondary” or “third” jerseys may submit them all for consideration, but only one from each club can be chosen by the MHR staff for the final bracket.

All age levels up through 18U on the boys’ side and 19U on the girls’ side (U18 in Canada) are eligible to participate. Junior, college and school teams are not eligible at this time, but if there is sufficient interest in this jersey challenge, holding similar contests for those levels in the future is possible.