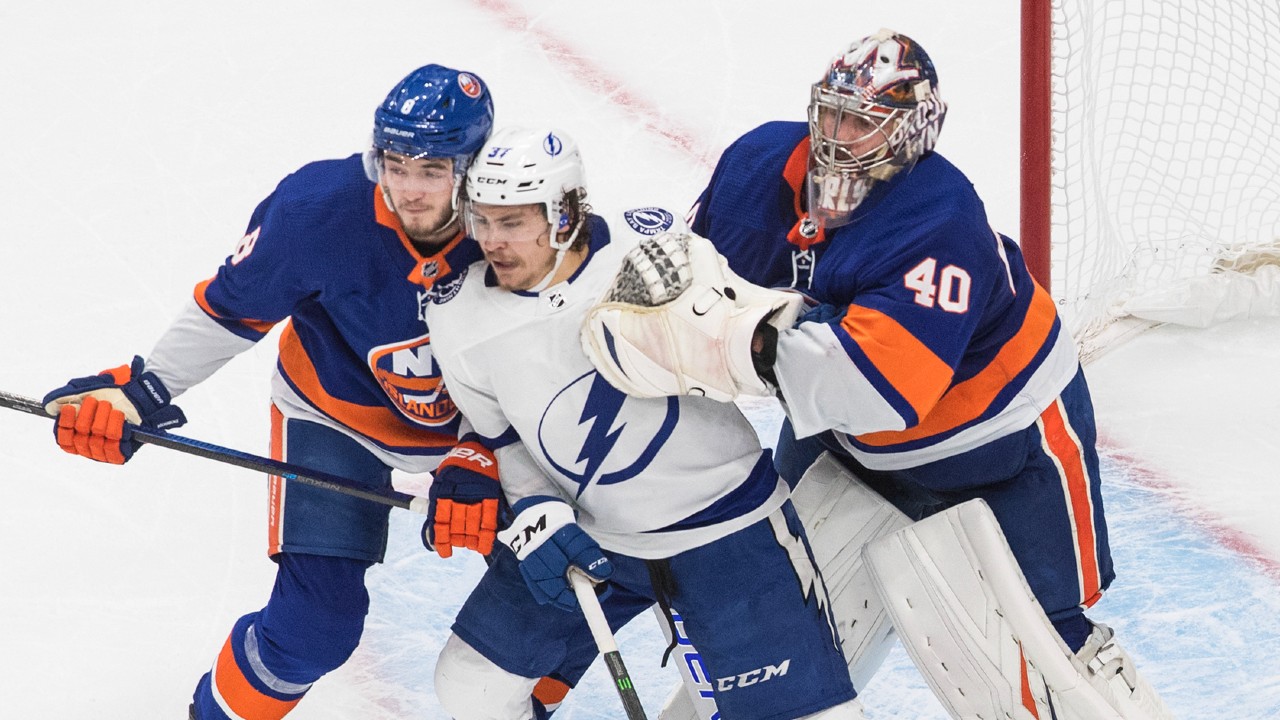 With the Vegas Golden Knights’ elimination from playoff contention late Wednesday, the field of 16 for the Stanley Cup Playoffs was finalized. Nothing that would happen on the ice Thursday or Friday would alter that. All that remains to be determined at this point are a few final seedings and opening-round matchups.

That’s not what the National Hockey League had in mind when the current playoff-qualification format was established.

No, the league expected folks to wake up Friday, the last day of the season with a full slate of games, check the schedule and get pumped up to see great matchups like Boston at Toronto, Washington at the Rangers, Tampa Bay at the Islanders, Vegas at St. Louis, Calgary at Winnipeg and Vancouver at Edmonton – at least some of which likely would have an impact on the final standings, actual playoff berths and opening-round matchups.

Instead, we already know which teams will advance to the postseason, most of the 16 seeds are determined and we can’t tell if the teams jockeying for final positioning are even trying at this point.

A week ago, rumors were swirling that the Pittsburgh Penguins might rest a bunch of players and essentially tank to get a first-round matchup they preferred. They won a couple games after that before losing by a combined 9-2 margin against Philadelphia and Edmonton this week. They take on an out-of-the-mix Columbus Blue Jacket team Friday.

The Washington Capitals, a team that has never really had a chance to ice its full lineup this season because of injuries, appeared to be peaking at the right time heading into the season’s last week before superstar Alex Ovechkin suffered a shoulder injury that has him listed as “day to day.” The Caps decided not to further risk the health of their injured star, resting him until the playoffs and turning in two horrendous efforts against an underachieving Islanders team that was expected to contend but was eliminated long ago.

Vegas, the preseason pick by pretty much everyone to win the Pacific Division, has been fighting for its playoff life the past several weeks. With the Golden Knights’ roster, schedule and past history, it was assumed that as one of the few teams playing meaningful games they would be able to turn it on, sneak into the playoffs and be one of those teams no one would want to face in the first round.

At the very least, many of us thought Friday's game between Vegas and St. Louis might have huge postseason implications. Nope. The Golden Knights limped, then crawled to the finish line by dropping their last three contests and five of their last six. No soup for Vegas this year.

The Golden Knights’ tailspin means that only three Pacific Division teams will advance, with five Central Clubs moving on. Vegas enters the season’s final night of play with 92 points, four behind the Stars. As the league’s only real hope to provide us with some win-or-go-home excitement on the season’s final weekend, Vegas has left us looking at a full slate of Friday-night hockey and longing for more.

When the National Hockey League began the current wild-card playoff format in 2013, the intent was to reward teams in stronger divisions and ensure that more clubs would remain in the playoff hunt through the season’s final weekend. The format does, for the most part, reward stronger divisions as evidenced by the Central Division’s qualifying five teams for this year’s postseason. But clearly the hoped-for fantastic final-weekend finish has not materialized – at least not this year.

Over in the Eastern Conference, the eight playoff teams basically have been set since January, and for the first time in league history all eight qualifying clubs from one conference will finish the regular season with more than 100 points. Unfortunately, that impressive top-half dominance has removed pretty much any potential excitement from the playoff race.

The New York Islanders did get it together for a bit to pull within shouting distance of a wild-card berth, but as late as last week they were as many as 19 points out of the final spot. And despite this week’s two victories against Washington, the Isles trail the Caps for the final Eastern playoff berth by 16 points.

That’s not to say there aren’t some meaningful Friday games, and as usual, the most anxious fanbase in the league likely is the beaten and battered group that bleeds Maple Leaf blue. As well as the seemingly cursed Leafs have played this season – their impressive 113 points rank only behind Florida, Carolina and Colorado in the league’s overall standings – there still is a pretty good chance they will face the two-time-defending Stanley Cup winners from Tampa Bay in the opening round.

The Lightning, who take on the Islanders Friday at 7:30 p.m., have 108 points, giving them a one-point edge over Boston in the race for third place in the Atlantic Division. Ironically, the Bruins travel Toronto for a 7 p.m. matchup. Either Tampa Bay or Boston will finish in third place and take on the Leafs. The other team will be the top Eastern wildcard and face Carolina.

Soooooooooooo, if Toronto beats Boston, the Leafs are guaranteed to play Tampa Bay, but if the Leafs lose, they might play the Bruins instead. That’s not to say that Boston isn’t a solid team. They are a talented, veteran club with playoff experience, but let’s be real here. Would you rather play a locked-and-loaded Lightning team that is coming off two titles and has probably the top clutch goaltender in the sport or Boston?

The Lightning probably would prefer to draw Toronto over Carolina, which has 116 points and will finish first atop a strong Metropolitan Division. Toronto, meanwhile, likely won’t put up much of a fight against Boston in hopes that maybe the Islanders will show up one more time to avenge their past postseason frustrations against Tampa Bay.

It seems likely that the Lightning will be in full playoff mode against New York in hopes of securing Toronto as their first-round opponent. Boston will play to win against Toronto, and the Leafs probably will let them. At least one of those games might produce some late-season drama.

On the surface, Washington vs. the Rangers and Pittsburgh vs. Columbus should provide some excitement, but it’s hard to tell if the Caps or Penguins really care about winning right now. A Washington win and Pittsburgh loss would propel the Caps into third place in the Metro and into a first-round series vs. the Rangers. Any other outcome and the Pens get the Rangers while Washington drops to the second wildcard to take on the Presidents’ Trophy-winning Florida Panthers.

While Florida lacks playoff experience, the Panthers are supremely talented. They also are younger and faster than the Caps, who haven’t won a first-round series since capturing the Stanley Cup in 2018. It seems like both Washington and an aging Pittsburgh team would prefer to play a Ranger group that probably has overachieved this year and has an outstanding, but inexperienced, goaltender.

So perhaps the final full night of NHL play for the 2021-22 season provides more intrigue than drama? Instead of win-or-go-home drama, we can tune in to see which teams actually give an honest effort and which clubs clearly have preferred opening-round opponents.

Of all the matchups it seems most likely that the Tampa Bay-Islanders contest will be the one that most resembles a playoff environment – at least on the ice. Barry Trotz’ teams never back down, and I’m sure the Isles would like to ruin the Lightning’s plans of a postseason visit to Toronto. Trotz had no issue sticking it to his former Caps players this week.

“Just play the right way,” was the message Trotz the message Trotz told the media he wanted to convey to his players. “Play with the effort and commitment that’s professional {and} which has Islander standards. Don’t cheat each other.”

Islanders Forward Josh Baily echoed those sentiments in a quote that was reported in Newsday.

“We’re certainly not going to give up,” he said. “You want to end things on the right note, regardless of the situation you’re in.”

In the Western Conference, the Blues need a win and a regulation loss by Minnesota to get home-ice advantage vs. the Wild in their first-round matchup. Minnesota plays Colorado, the West’s top team, in a game that means nothing to the Avs.

Dallas can earn the West’s top wildcard spot with a victory and a regulation loss by Nashville against Arizona. Any other result for the Preds locks them into the top position and sets up a matchup against Calgary. Whoever finishes as the second wildcard faces Colorado.

There is only one game after Friday’s contests, a Sunday makeup game between Seattle and Winnipeg. Here is what we know for sure as of Friday morning: