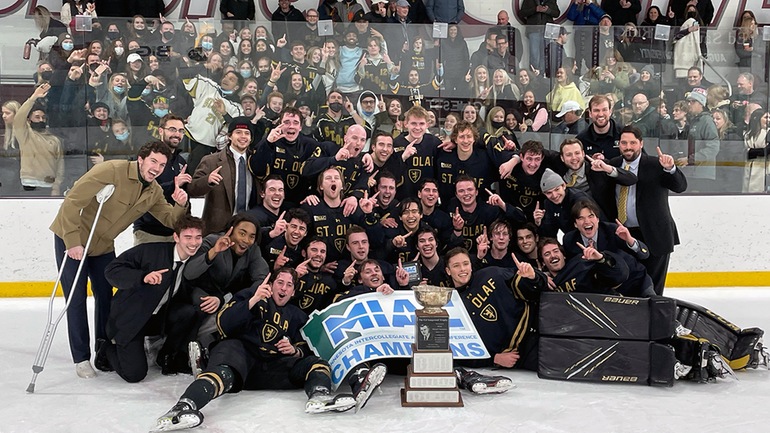 March Madness has become a phrase so commonly associated with NCAA basketball postseason play that it actually has been trademarked for that sport. That doesn’t mean college hockey doesn’t provide its own brand of madness about this time every year, though.

The great thing about the hockey madness, however, is that it really starts a couple weeks before March, as the NCAA Division III men’s and women conference tournaments get underway, and continues all the way into April as the Division I and Division III conference and national champions also are crowned.

This year has been no exception.

The upsets started right off the bat in NCAA D3 postseason play on both the men’s and women’s side of things. In hockey, though, while upsets happen regularly, it is extremely difficult for a lower-seeded team to navigate its way to upset wins against two or three different superior teams in a row during a seven-to-10-day span.

It's difficult, but not impossible.

Look no farther than the United Collegiate Hockey Conference (UCHC) and the Commonwealth Coast Conference (CCC) to see how difficult it is to sustain the level of intensity and quality of play necessary to record multiple upset victories in a row.

While second-ranked and top-seeded Utica, as expected, knocked off ninth-ranked Wilkes, 7-4, in the UCHC men's title game Saturday to improve to 25-2-1, the tourney opened with a bang on Feb. 23 as No. 3-seed Stevenson, a team that had received top-15 consideration much of the year by posting an 18-6-1 record, fell to sixth-seeded Manhattanville, which was 9-12-3. Fourth-seeded Chatham also earned its first-ever postseason victory in the opening round of UCHC Play.

Right off the bat on Feb. 23, seventh-seeded Curry, which won one conference game all season, upset second-seeded Suffolk, which had a historic season for its program and went 14-4 in league play. The fifth-seeded Suffolk men almost returned the favor in their quarterfinal game against a Curry team that had spent most of the regular season ranked among the nation’s top 15, leading for the more than half the game before falling, 2-1, on a late third-period goal.

Top-seeded and eighth-ranked Endicott then knocked out Curry, 8-0, in the women’s semifinals before capturing the first-ever CCC title Saturday, 2-1, against a fourth-seeded University of New England team that had upset third-seeded Nichols, 4-3, in the semifinals.

The fireworks were not limited to the women’s tournament in the CCC, however, as Nichols, which had gone 6-15 to finish seven points out of fifth place in league play, upset a third-seeded Salve Regina team that had been in and out of the national rankings all season, 3-1, Feb. 26. Nichols fell to eventual-champion and 11th-ranked University of New England, 4-1, in the semifinals, and the Nor’Easters went on to defeat No. 13 Endicott, 3-2, in a championship-game overtime thriller.

The upsets didn’t end there in the Northeast, though, as sixth-seeded Skidmore made its deepest run ever in the New England Hockey Conference (NEHC) Tournament, beating third-seeded UMASS Boston before falling to eighth-ranked Babson in the championship game Saturday. A generally solid program that usually ranks among the top half of the teams at the Division III level, the Thoroughbreds upset fifth-ranked Hobart, 3-2, Feb. 26, for their first-ever semifinal victory in seven tries after climbing in the national computer rankings throughout the second half of the season.

There also was a Cinderella run to the NEHC finals in the women’s tournament as fifth-seeded Castleton advanced all the wah to the championship game before dropping a 4-0 decision to top-seeded and third-ranked Elmira. A first-round upset in which sixth-seeded William Smith knocked off third-seeded Southern Maine in double overtime set the tone for the tournament, and Castleton took out second-seeded Norwich, 1-0, in the semis.

Staying in the Northeast, as expected, top-seeded and 18th-ranked Plymouth State captured its third-straight Massachusetts State Collegiate Athletic Conference (MASCAC) men’s title and became the league’s first three-peat champion with an 8-4 victory over Salem State Saturday. That result ended a surprising run by the No. 6 seeds, who beat third-seeded Worcester State and fifth-seeded Westfield State on the way to finishing the year with a 12-13-0 record.

Over in the New England Small College Athletic Conference (NESCAC), the men’s tournament didn’t feature many surprises. Fifth-seeded Hamilton was the only lower-seeded team to win in the quarterfinals, downing fourth-seeded Wesleyan, 3-2, and the top-two seeds – No. 1 Colby and No. 2 Trinity – were slated to face off for the championship Sunday. Likewise, the women’s tourney pretty much went as planned until third-seeded Amherst beat second-seeded and ninth-ranked Colby in the semifinals to advance to Sunday’s title clash against top-seeded and top-ranked Middlebury.

The top-two men’s seeds also faced off in Saturday’s State University of New York Athletic Conference (SUNYAC) championship game after the tourney opened with sixth-seeded SUNY Brockport upsetting No. 3-seed Plattsburgh, 7-6, in the quarterfinals. Third-ranked and top-seeded Geneseo captured the championship with a 6-1 victory over No. 12 Oswego in the finals.

There was no funny business in the Northern Collegiate Hockey Association (NCHA) men’s tourney as the top-two seeds, Adrian and St. Norbert, met for the championship for the eighth time in the last nine years Saturday. No. 1-ranked Adrian came out on top to capture the Harris Cup against No. 5 St. Norbert, improving to 27-1-0 overall after going 18-0 in league play, with a stunning 12-3 victory to prove that there can be madness even with the favored team wins the title.

Madness also prevailed as the NCHA women competed for the Slaats Cup. St. Norbert, which didn’t even compete because of COVID in 2020-21, returned to the ice in 2021-22 to post an impressive 20-8-0 record heading into Saturday’s championship game after compiling an 8-19-0 mark the last season they competed. Their opponent, Aurora, entered the title contest with a 21-6-0 record following its upset of 10th-ranked Adrian, 3-0, Friday.

After posting the best season in its five-year history and eclipsing the single-season school victories record by four games, fourth-seeded Aurora rallied for four third-period goals to capture the Slaats Cup, 5-1, against third-seeded St. Norbert.

“We have been practicing for this moment for months,” Auroroa head coach Jackie Kooistra said via the NCHA website. “We have had seniors and super-seniors that have really paved the way for our team. They took the lumps … they are the ones that took double-digit losses their first year. To have them come in here and not only beat Adrian, but to win the whole thing … it just feels so good. I am so happy for them. My job was to make their experience better, and I think we have accomplished that.”

And finally, in a performance that exemplified postseason tournament madness, seventh-seeded St. Olaf upset the top-three Minnesota Intercollegiate Athletic Conference (MIAC) men's seeds to skate away with the MIAC championship and earn an automatic berth to the NCAA Tournament. The Oles beat top-seeded and fourth-ranked Augsburg, 5-2, on the road Saturday to earn the title after beating second-seeded Concordia, 3-2, and third-seeded St. John’s, 3-1.

The best news is that the fun has just begun.

After two years with no postseason tournament because of the COVID-19 outbreak, the NCAA Division III Tournament pairings will be announced this week just as the Division I men’s and women’s conference tournaments are heating up.

The men’s selection show can be seen at www.NCAA.com on Monday, March 7, at 10 a.m. ET, with opening-round play set for March 12 and championship weekend slated for March 25 and 26 in Lake Placid, N.Y.

The women’s tournament field will be announced at www.NCAA.com on Sunday, March 6, at 8:30 p.m. ET, with championship weekend set for March 18-19 at the home rink of the highest-remaining seed.