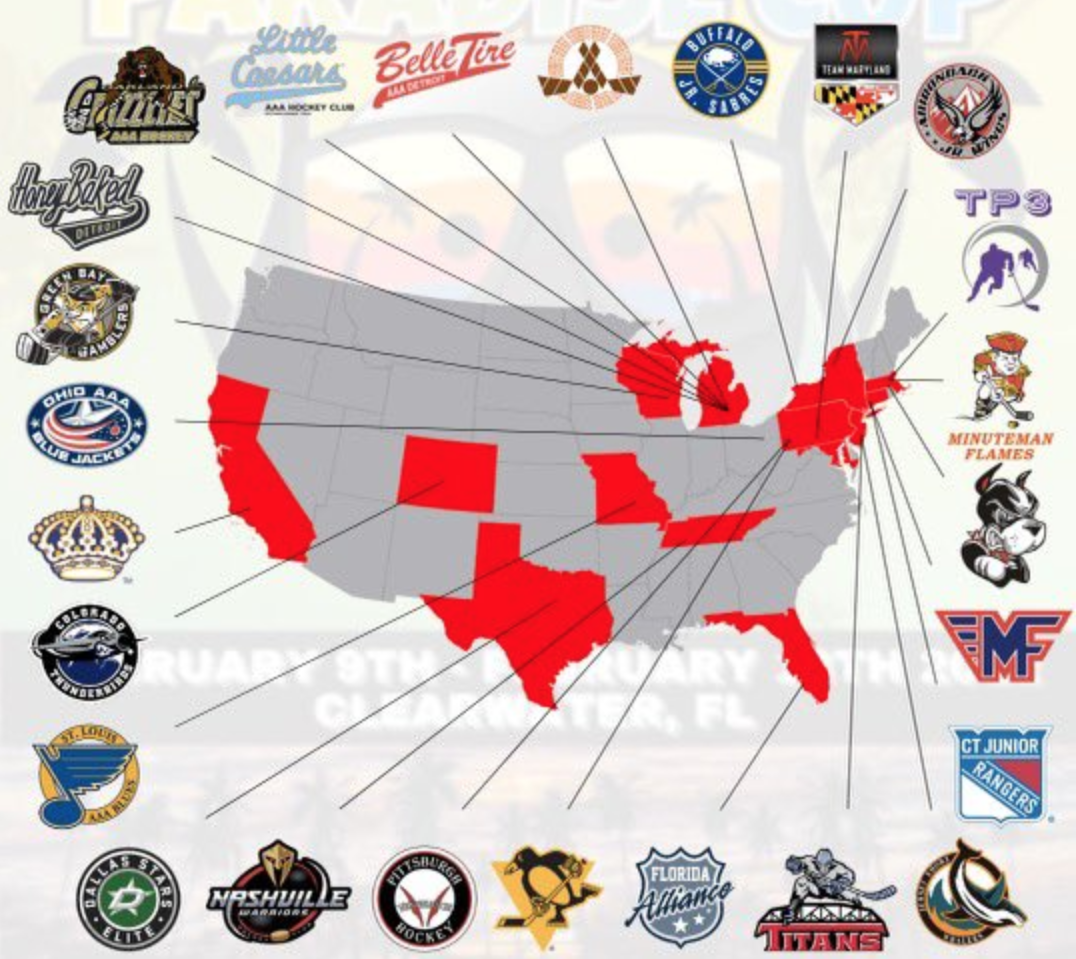 It seems as though most of Canadian youth hockey finally is back up and running, and this week in the United States we have the top 2009 boys tournament of the year. So why not mix it up a little for our Week 20 MHR Games of the Week?

Often when we post our Games of the Week, we don't really know what the very best matchups of the weekend slate will be (we also try to spread it around to as many areas and clubs that we can), because in tournament play the semfinal and championship matchups aren't decided until way after we post our write-up. This week, the Exposure Hockey Group's Paradise Cup for 2009 boys in Clearwater, Fla. started on Wednesday, so we had a chance to see how the semifinals panned out to pick a game from that tournament.

In our LiveBarn featured game of the week, from sunny Florida, we have a 2009 USA Boys Paradise Cup Warrior Division semifinal matchup between the No. 6 Boston Jr. Terriers and seventh-ranked Pittsburgh Penguins Elite. The Paradise cup featured six of the nation's top-20 teams, nine of the top 20 and 14 of the top 30, so these clubs had to run the gauntlet to advance. Each team has played five tough games to earn the opportunity to be part of the division's final four.

We head to chillier climes up north for our remaining games of the week as we bring you two girls' and one boys' game from Canada, including a matchup of the top-two U15 girls' teams as the Peterborough Ice Kats take on the Durham West Lightning in Ontario. Our other two matchups have top-10 Canada Girls U13 and Ontario Boys U16 rivals facing off.

Unless the streams are blacked out for some reason, each of this week’s Games of the Week can be seen live or on-demand on LiveBarn.

These two top-seven rivals face off for the right to face the winner of the 6 p.m. game, also on LiveBarn, between TP3 Hockey from Massachusetts and the 11th-ranked St. Louis AAA Blues. Each of these teams faced a tough road to the semis, with Boston tying the No. 17 Buffalo Jr. Sabres, 2-2; beating No. 9 Little Caesar's, 6-4 and 8-0; beating No. 18 Florida Alliance, 3-2; and falling to No. 3 Dallas Stars Elite, 3-0. Pens Elite fell to TP3, 4-2, before kocking off Dallas, 5-3, No. 22 Honeybaked, 5-3 and the No. 8 Mid-Fairfield Stars, 3-2, in overtime. They also tied the 10th-ranked Los Angeles Jr. Kings, 4-4. After all that, the Jr. Terriers bring a record of 35-9-5 into the semifinals. They have outscored their opponents, 191-88. Pittsburgh is 36-19-2 and holds a 251-163 scoring advantage over its opponents. Boston is 9-1-1 in its last 11 games, with a loss and a win during that span against Mid-Fairfield. Pittsburgh is 6-1-1 in its last eight outings, but dropped three straight prior to that run. Two of those losses were against No. 2 New Jersey xHockey Academy by a total of three goals. The other setback was against No. 9 Little Caesars in a game that ended a five-game winning streak. These teams have yet to meet this season.

The fourth- and sixth-place teams in the Greater Toronto Hockey League square off in an important matchup. North York actually sits one point behind Vaughan with a 8-6-2 record and 18 points. The Kings are 7-1-5 for 19 points and have three games in hand. The Rangers are tied in points with the fifth-place Markham Majors but have played two more games. The No. 1 and No. 3  Mississauga Senators and Toronto Marlboros sit atop the standings with 24 and 23 points, respectively. Overall, North York is 23-10-1 with 128 goals for and 81 goals allowed. The Rangers didn't play from Dec. 14 until Feb. 5 and are 2-1 since returning to action, with the loss coming against Markham. They are 5-1-1 in their last seven outings, including a 2-2 tie against the Marlboros. North York handed the Kings a 7-2 loss on Nov. 6. Vaughan is 13-5-4 on the season and holds a 69-49 scoring advantage over its foes. The Kings played their first game since Dec. 8 on Feb. 6, skating to a 2-2 tie with the No. 12 Don Mills Flyers. That deadlock extended their unbeaten streak to four (2-0-2), and they are 10-1-3 in their last 14 outings.

The first- and second-place teams in the Ontario Women's Hockey League East Division, also the top-two teams in our Canada Girls rankings, go head to head in Ajax, Ontario. The Ice Kats are a perfect 13-0 in league play and have outscored OWHL opponents by a 59-10 margin. Durham West is 8-1 in OWHL play and holds a 38-7 scoring advantage in those contests. Something has to give when these two teams, both averaging more than four goals and allowing fewer than one goal per game, face off. Peterborough is 37-2-0 overall with 158 goals for and 25 goals against. The Ice Kats did not play between Dec. 16 and Feb. 4, but they have beaten the No. 30 Whitby Wolves and No. 21 Belleville Bearcats since returning to play. One of their losses came against this Durham West team by a by a 3-1 margin Sept. 26, but they also beat the Lightning, 2-1 Sept. 19, and 4-1  Nov. 27. Peterborough's other setback was a 3-1 loss to the No. 5 North York Storm Dec. 3, and since then they have won nine straight without allowing more than one goal in any of those contests. The Ice Kats have allowed more than one goal just six times this season while recording 24 shutouts. At one point they posted seven consecutive clean sheets. Durham West did not play between Dec. 12 and Feb. 4, but the Lightning have made up for lost time since by going 6-0 with three shutouts since returning to action. That brings their overall record to 32-4-2 and their goal differential to 140 goals for and 42 goals against. Durham West's only losses were to Peterborough in September and November, the No. 4 Nepean Wildcats in October and the No. 5 North York Storm in October. Since the last loss to the Ice Kats, the Lightning have gone 14-0, allowing more than one goal just twice. They earned a 3-2 shootout win over the No. 22 Toronto Leaside Wilcats and a 3-2 overtime victory against the No. 6 Stratford Aces since returing to play in the only contests in which they allowed multiple goals. Durham West has recorded 12 shutouts on the season and allowed more than one goal just 10 times.

It's first place vs. fourth place in the OWHL Central Division as the first- and ninth-ranked Canada U13 teams hit the ice in Toronto. North York is 10-1-0 in league play with 20 points, good for a nine-point lead over the 5-5-1 Sharks, and has outscored league oppoinents, 78-11. The Sharks hold a 19-16 scoring edge over there OWHL foes. The Storm are three points in front of the No. 8 Toronoto Leaside Wildcats and six ahead of the No. 6 Barrie Sharks in the standings. A win for Scarborough could pull the Sharks within a point of Barrie. North York has won 24 of its 25 games overall this season, only falling to Barrie, 3-2, Dec. 14. The Storm opened the season with 19 straight victories before that setback. Since the loss they have gone 5-0, recording three shutouts and scoring 42 goals in that span. After being off from Dec. 8 until Feb. 5, North York has returned to action by winning all three of its games, including a 5-0 victory over the WIldcats. They have outscored their opponents, 149-19, allowing more than one goal just four times. North York beat the Sharks, 2-0 Oct. 2, and 2-1 Nov. 27. Scarborough is 20-12-3 overall and has outscored its opponents, 87-61. The Shrks are 3-2 since returning to play Feb. 3, with the losses coming against the two teams they are chasing in the standings, and are 7-2 in their last nine outings.