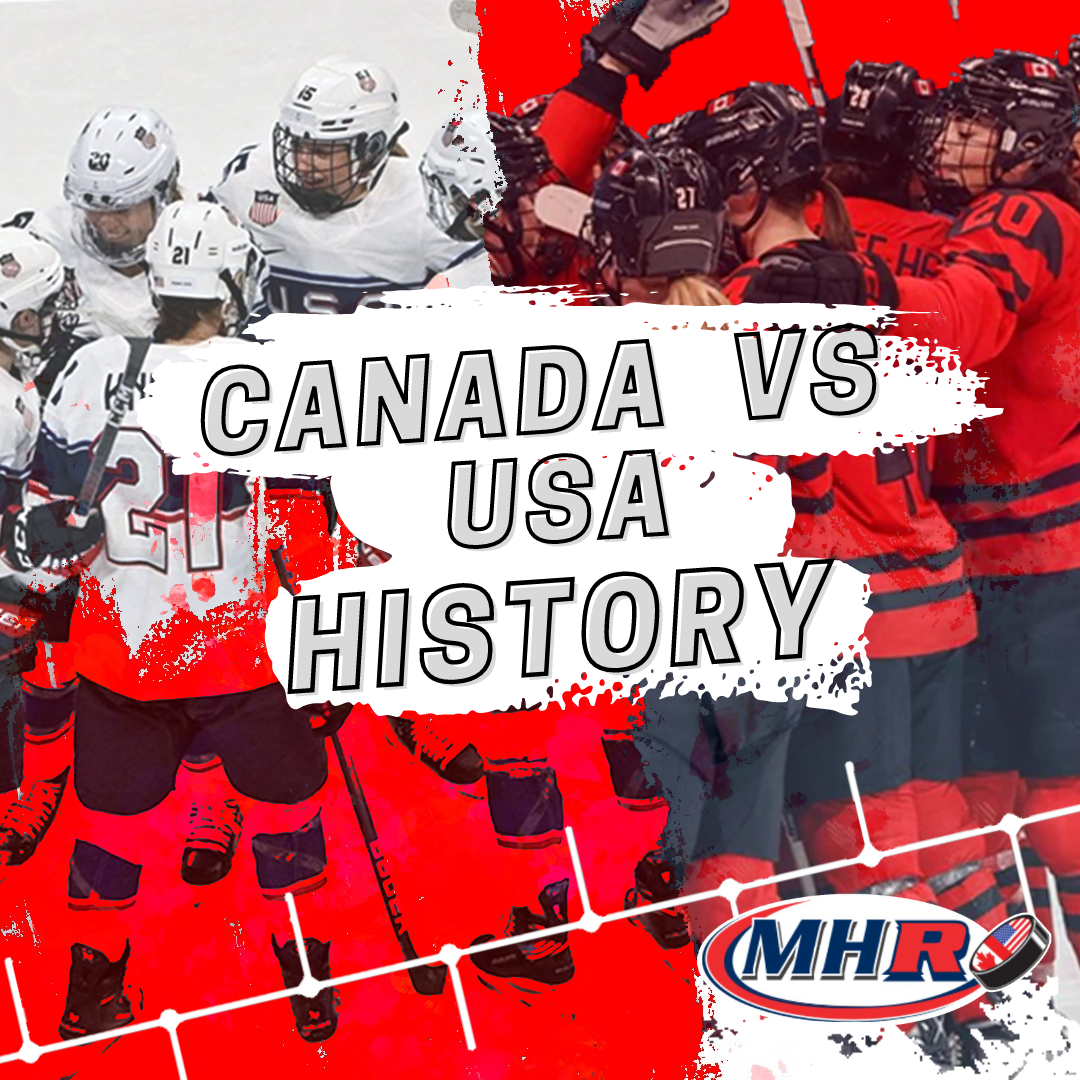 USA vs. Canada: Who Will Write the Next Chapter?

This one isn’t for all the marbles, but that usually doesn’t matter.

Tonight at 11:10 p.m. Eastern when the women from Canada take on their arch-rivals from the United States at the Beijing Winter Olympics, the only thing that will be at stake is a perfect 4-0 preliminary-round record and the top seed in the quarterfinals. No matter what happens tonight, these two world powers have been steamrolling the field and are on a crash course to meet for the gold medal once again Feb. 16.

None of that matters.

As a wise hockey coach – or the guy who played one in a movie – once said, this isn’t some throwaway game up in Rochester. That’s right, this is USA vs. Canada.

It was yet another instant classic settled in overtime by Canada’s “Captain Clutch” herself, Marie-Philip Poulin. Like so many games throughout the history of this series, that contest featured a big comeback by one of the teams – Canada trailed 2-0 early – a ton of speed, skill and energy; a healthy dose of ill will between the two teams, and a Poulin OT game-winner.

When a player gets hot in a basketball game or a wide receiver starts piling up big plays and yards in football, we often say something like, “You might want to guard that person.” Well, here is a friendly reminder for Team USA tonight: See the player wearing No. 29 over there? The one with the maple leaf and a “C” on the front of her sweater? Yeah, you might want to guard her.

In what has become one of the fiercest rivalries in all of sports, it seems like every time these two nations face off, one of them wins by a single tally, and it often takes extra time or even a shootout to decide a winner. One bad pass, one unlucky bounce, one questionable call or one bad line change can make the difference.

That makes it even more remarkable that one player, Poulin, has turned out to be a Yankee killer on so many occasions and with so much at stake.

It started way back in 2010 when Poulin, then the youngest player ever to represent Canada in women’s hockey at the Olympics, netted a pair of goals to lift her team to gold on home soil in Vancouver. Four years later in Sochi, Poulin scored with 55 seconds left in regulation to complete a two-goal comeback and force overtime before burying the golden goal eight minutes into extra time.

Then there was the gold-clinching OT game-winner last summer, which Poulin followed up by potting a pair of overtime winners during the six-game pre-Olympic Rivalry Series between the two nations.

Poulin usually comes up big when it counts. There often is a dramatic comeback by one of the teams. And so many of these games are intense, tension-filled battles that need more than the allotted time to determine which team is best. Sometimes it even comes down to a skills contest.

The last Olympic gold-medal game, four years ago in Pyeongchang, South Korea, needed even more than extra time as it wasn’t decided until an unbelievable shootout goal by America’s Jocelyne Lamoureux and Maddie Rooney’s save on Meghan Acosta.

Even the games that people don’t think really matter – remember, they ALL matter to these players – are epic, white-knuckle thrillers.

Since the start of the 2021 World Championship, Canada and the U.S. have played eight times, including the preliminary and gold-medal games in Calgary. Canada has gone 6-2 in those contests, but five were decided by a single goal and four required overtime. Going back to the start of the 2018 Olympics, the two countries have met 23 times, with the Canadians winning 12 of those games, the Americans winning 11, 14 one-goal differences and seven OT thrillers.

“Every time I hear of Canada versus the U.S., I think 3-2,” Canadian Head Coach Troy Ryan told the Associated Press recently. “So many of these games end up in 3-2 scores.”

He's not wrong. Well, not all of the games end 3-2, but it has happened six times since a 2-1 preliminary-round win by Canada in Pyeongchang.

The point is that the two teams are separated by the smallest of margins virtually every time they compete. Even though Canada has won six of the past eight meetings since the start of Women’s Worlds in Calgary, that tally easily could be reversed.

“Every time we play them, it's going to come down to a goal, to overtime. That’s why it’s the greatest rivalry in sports,” longtime USA forward Amanda Kessel, who is playing in her third Olympics in Beijing, said following the WWC gold-medal game.

USA forward Brianna Decker is considered one of the top players in the world. Unfortunately, she suffered an ugly lower-leg injury in the team’s opening game vs. Finland and is out for the remainder of the tournament. Melodie Daoust, also one of the world’s best, likewise was injured in Canada’s first game. She is day-to-day and may miss tonight’s game with an upper-body ailment but is expected to return later in the tournament.

It all just adds to the intrigue and allows some of the new faces on each team to step up and become part of the history and passion that characterizes this rivalry.

“Our business isn’t finished until we come back with a gold medal,” Decker told the Associated Press. “It’s a sad thing, but sometimes you’ve got to lose to get a little bit more out of your team and yourself.”

For both the United States and Canada, the expectation is a gold medal whenever they compete in an international tournament – and rightfully so. These two teams have combined to win all six Olympic golds that have been awarded and all 20 World Championship gold medals. They have met in five of six Olympic gold-medal games, with the U.S. failing make the finals in 2006 because of an upset loss to Sweden, and 19 of 20 WWC gold-medal contests. Canada missed the 2019 World Championship gold-medal game after falling to Finland in the semifinals.

The U.S. captured the first-ever women’s hockey Olympic gold medal at the Nagano Games in 1998 after overcoming a three-goal deficit to earn a 7-4 victory against Canada in the prelims and skating to a 3-1 victory in the finals. It would be 20 years in between golds for the Americans, however, as Canada placed first in 2002, 2006, 2010 and 2014.

That 2014 gold-medal game loss was especially excruciating for the United States, which led 2-0 at one point and hit the post with Canada’s goalie pulled moments before Poulin tied the game in the final minute of regulation. It also stung to lose 3-2 on home soil at Salt Lake City in 2002, although Canada never trailed in the deciding contest. The Americans fell to Sweden before capturing the bronze in 2006, and 2014 in Sochi was where Poulin first worked her overtime magic.

While the Canadians were dominating the Olympic gold-medal count, the Americans strung together four consecutive gold-medal showings at Women’s Worlds from 2015 to 2019 and had won nine of the previous 11 WWC gold medals before placing second in Calgary, thanks again to Poulin.

The next generation of women’s hockey stars is starting to emerge and will get a first taste of USA vs. Canada on the Olympic stage tonight. Canada’s Sarah Fillier, a star at Princeton University, already has been lighting up the scoreboard and leads the tournament in goals with five, while the Canadian defense, including the tournament’s top-two scoring defenders in Erin Ambrose and Claire Thompson, is comprised mostly of first-time Olympians.

On the American side, Olympic rookie Jessie Compher is tied for the team lead and for fourth in the tournament with three goals. She is joined by talented youngsters Grace Zumwinkle and Abby Roque up front along with 19-year-old Caroline Harvey and fellow Olympic rookies Jincy Dunne, Cayla Barnes and Savannah Harmon on the blue line.

The best part about the Beijing Olympics is that these exciting newcomers are joining some of the sport’s all-time greats, who are still performing at peak levels and who have contributed so much to the history of this rivalry.

The torch will be passed on to the youngsters soon enough, but for now they will get a slightly different taste of one of the world’s most intense rivalries tonight as they skate alongside many of the veteran stars they grew up watching.

One thing that may be a little different these days is the relationship between the rival players off the ice. Many of the sport’s biggest names from both countries have been working tirelessly to grow the game, ensure equal treatment for female players at the highest levels of the sport and lay the groundwork to establish viable professional hockey options for women going forward.

Is it possible that sharing those common goals and working together softened the rivalry some?

“It was real hate,” Cammi Granato, 1998 USA Olympic team captain and the first woman inducted to the Hockey Hall of Fame said recently. “That’s the team that is always standing in your way of what you want.”

If you watch these two teams compete on the ice, however, it becomes immediately clear that there has been no decline in intensity once the puck is dropped. Sometimes, the more you get to know someone and the closer you get to them, the respect grows and the desire to beat them becomes even stronger.

“Canada and us, we share a special bond and that makes for great hockey and a beautiful rivalry,” Knight told reporters in Beijing.

While retired star Monique Lamoureux recently said hatred might be too strong of a word to characterize the current mentality of the rivalry, she thinks it’s as intense as ever on the ice.

“Instead of the word hate, I would say passionate,” she told the Associated Press.

Fillier, the precocious Canadian phenom, could only speculate as she prepares to become part of the USA-Canada women’s Olympic hockey saga.

"It could be a big match,” she told CBC. “It's exciting. We have a huge rivalry with the U.S., and we’ve been building our game in every game of this tournament.”

Yeah, it could be a big match. Maybe. The youngster really has no idea, but she will very soon.

And that’s what is so great about these games; the old mixes with the new and chapters are added to the lore.

Hopefully, two more instant classics are headed our way over the next week and a half. Only time will tell, but one thing you can count on is that Canadian kid wearing No. 29 adding another chapter to her part of the story if the Americans don’t remember to keep an eye on her.