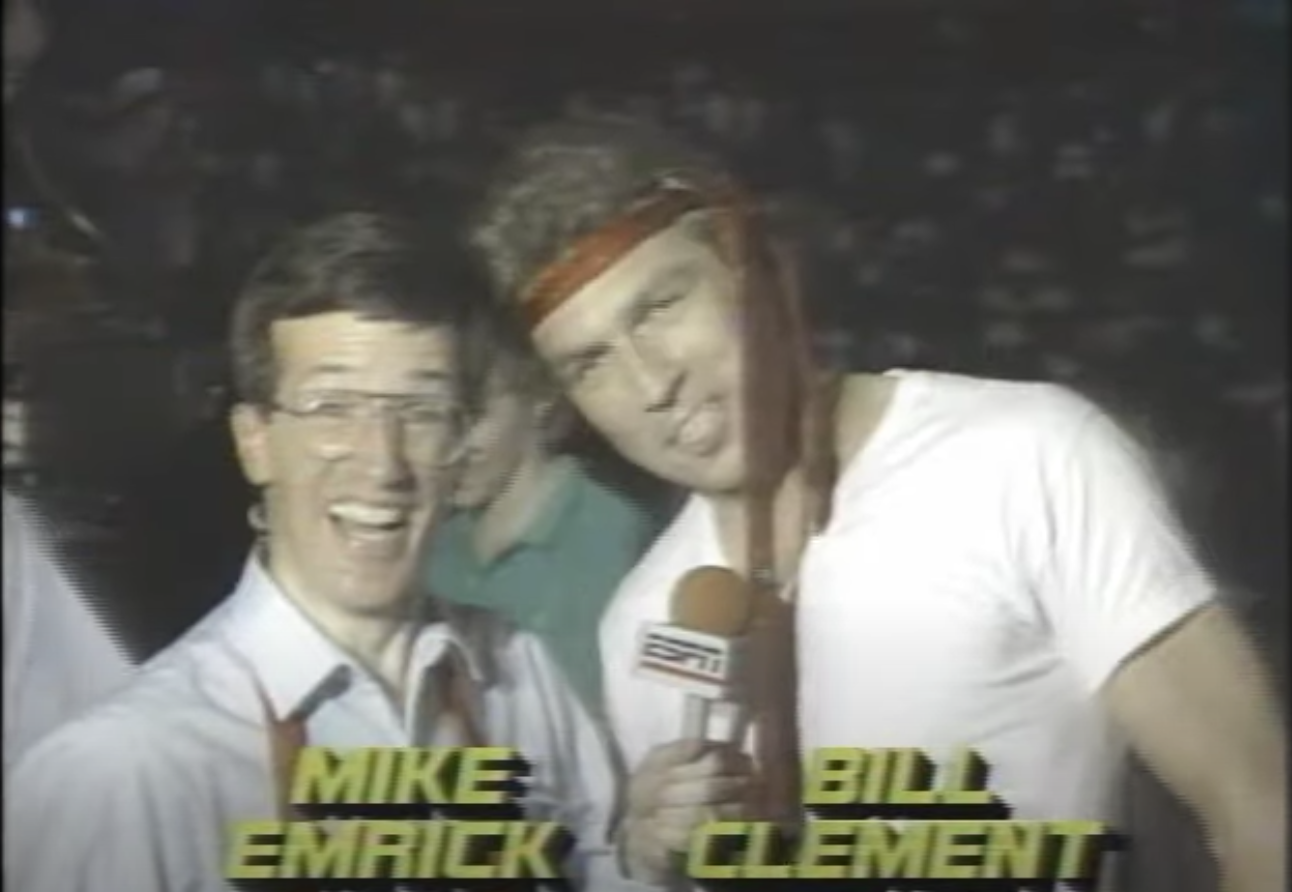 For years hockey fans have trolled ESPN, the self-proclaimed “Worldwide Leader” in sports programming, for being apathetic toward the NHL and other forms of the fastest sport on ice.

No, scratch that. Only full transparency here; hockey fans have flat-out accused ESPN of not caring about hockey and blatantly ignoring it.

As with most things in the world these days, the truth probably falls somewhere in the middle. Apathy is probably a more accurate description of ESPN’s stance toward hockey in general – and the National Hockey League in particular – since the network last produced an NHL telecast in 2004.

ESPN didn’t totally ignore the sport and has always had ardent supporters of the game on staff in John Buccigross, Linda Cohn and Steve Levy. And they even kept their former on-air NHL color analyst Barry Melrose around to provide insight, analysis and commentary for 2-3 minutes at a time during the SportsCenter’s NHL in-season and postseason nightly highlight packages.

Don’t be fooled by the fact that Barry’s analysis usually was aired deep into the night on the latest of late-night SportsCenter shows long after the NFL, NBA, MLB, college football, college basketball, NASCAR, golf, MLS, international soccer, bowling, tiddlywinks, competitive cornhole, Australian rules football and cricket had been covered.

If that alone isn’t enough to convince you that ESPN cared about the sport, there have been some slightly under-the-radar indications in recent years that something was bubbling under the surface and about to boil over as far as the relationship between the NHL and ESPN was concerned. If you had been paying attention closely, you would have noticed that Linda Cohn had been hosting a regular NHL-themed show on ESPN+ for few years and that a relatively small number of NHL games had been made available live on the network’s online streaming channel.

I found those things to be a bit odd, but it never really dawned on me that ESPN might want to dive back into the NHL waters after a 16-year hiatus. Then in January news broke that NBC, which had held the NHL’s United States broadcast rights since 2005, announced it would be shutting down its cable sports network at the end of 2021.

My immediate thought was that NBC might add more NHL games to its main network package, and similar to its postseason coverage, find time slots on networks such as USA, CNBC and MSNBC to air games during the week. That wouldn’t be ideal, but certainly was an easy enough solution for the network and something to which fans of the sport had become accustomed.

The thought never crept into my mind that ESPN might jump back into the mix or that Turner Sports, which in recent years has added MLB and the NCAA Division I men’s basketball tournament to its popular NBA coverage, might emerge as a second national-television partner for the ever-expanding NHL. Of course, had I paid closer attention and known that the NHL’s U.S. TV contract was being renegotiated and combined that information with the under-the-radar coverage that had popped up on ESPN+ and TBS’ aggressive pursuit of other large sports contracts, I probably would have seen the new deal coming from a mile away.

But I hadn’t been paying close attention, and I didn’t see it coming when the announcement of the ESPN deal was made in March, followed by the Turner Sports announcement in April.

On March 10 it was announced that the NHL and ESPN had agreed to seven-year deal “returning hockey to ESPN for the first time since 2004. Included will be 25 regular-season games on ESPN or ABC, early-round playoff series and one conference final each year, four Stanley Cup Final series on ABC and more than 1,000 games per season streaming on ESPN+. ESPN+ and Hulu will be home to 75 ESPN-produced exclusive telecasts per season.

Oddly enough, the first thing that popped into my head at this point was the ESPN hockey music that had been a hallmark of its past telecasts and had been kept alive through video games and used to introduce Melrose’s SportsCenter segments. For our younger audience, NHL hockey was shown almost exclusively in the U.S. on ESPN from 1979 through much of the 1980s and again after a brief hiatus from 1992-2004.

Interestingly, the sports and entertainment network paid attention to the NHL when most mainstream U.S. sports fans were not, and frankly the NHL was a hallmark property for the network as it floundered through its shaky infancy during the early 80s before ultimately sending its signal into almost every home in the United States by the 2000s.

The truth is that for many of us who craved out-of-market NHL games when the league had no over-the-air national broadcast partner and maybe 50 games a year TOTAL were available for us to watch, it was strange NOT being able to watch games on ESPN. We just got used to it after a while.

So, while many hockey fans were shocked that ESPN would make a seven-year, $2.8 billion bid to be the top national broadcast partner of the NHL and were skeptical about how seriously the league would take the new marriage as well as how extensively it would cover the sport, for those of us who grew up only watching games on ESPN it was welcome news after years of dealing with polarizing NBC hockey analysts and the network’s barrage of telecasts and made-for-TV events featuring a regurgitation of the same big-market franchises.

A month later the Turner Sports deal was announced. It also is a seven-year pact for which the network reportedly is paying $225 million annually.

Not only was the Worldwide Leader jumping into the mix with some of the same host and analyst faces that we associated with the NHL all those years go, but also TBS and TNT would be bringing a breath of fresh air and new on-air talent to the game after partnering with the NBA for so many years and developing one of the most acclaimed studio shows and broadcast teams in all of professional sports.

A quick glance at the on-air talent rosters constructed by both networks indicates that some familiar faces such as Ray Ferrarro, Brian Boucher, Ed Olczyk, Kenny Albert, Kevin Weekes, Darren Pang and Keith Jones will be part of the broadcasts and studio shows, but they will be supplemented with new, yet familiar hockey personalities such as Wayne Gretzky, Mark Messier, Chris Chelios, Rick Tocchet, Paul Bissonnette, Hilary Knight, Cassie Campbell-Pascall and Leah Hextall. ESPN also will broadcast games in Spanish via ESPN Deportes.

Then there will be the old ESPN crew of Cohn, Levy, Buccigross, Sean McDonough and Melrose. The fun begins tonight – yes, tonight! – on ESPN and ESPN+ with a doubleheader that pits the Pittsburgh Penguins against the two-time defending Stanley Cup-champion Tampa Bay Lighting at 7:30 p.m. ET and the expansion Seattle Kraken against the league’s last expansion club, the Vegas Golden Knights, at 10:30 p.m. ET.

Turner Sports will show games on both TBS and TNT, beginning with an Oct. 13 TNT doubleheader that features the New York Rangers vs. the Washington Capitals at 7:30 p.m. ET and the Chicago Blackhawks against the Colorado Avalanche at 10 p.m. ET. TNT will televise games exclusively on 25 Wednesdays throughout the season, including 15 doubleheaders, and seven weeks of Sunday afternoon contests in March and April.

Turner is slated to show 72 regular-season games on TNT and TBS, including the Winter Classic, and will televise the Stanley Cup Finals in 2023, 2025 and 2027 as well as one conference final series per year and half of the opening two rounds of the playoffs.

With everything going on in the world and the 2020-21 NHL season extending well into the summer for the second straight year, these TV deals have gotten pushed to the back of our minds, and the start of the 2021-22 season seems to have snuck up on us despite being pushed back a week later than usual.

As someone who has subscribed to the DirecTV NHL Center Ice package and NHLTV on NHL.com for years to have access to as many games as possible, I was intrigued by the announced broadcast changes, but didn’t really dig into them. I did notice some new names along with some familiar ones – good and bad – when the talent lineups were announced not long ago, but beyond that didn’t pay much attention.

With the season starting tonight I poked around a bit and realized that I may not even need my Center Ice package anymore since more than 1,000 out-of-market games will be available via the various ESPN platforms and NHLTV has basically gone the way of the dinosaurs here in the United States. Pretty much every single game now can be seen via the various ESPN overt-the-air and online options and the TBS/TNT slate of telecasts.

If you have been spending a nice chunk of money to see out-of-market games for the last 20 years or for however long, I recommend taking a look into what’s available now on ESPN+ and Hulu before signing off on any other TV or online packages. You still may have time to save a lot of cash.

THIS LINK provides access to all the information you should need to understand the ESPN/Disney options and figure out what’s best for you. In addition to all the game telecasts there is host of accompanying content that provide more insight and information than ever before. Some new in-game twists should make viewing more interesting for casual fans, too.

“It sets a new standard in delivering our game to the most passionate and tech-savvy fans in sports in the ways they now demand and on the platforms they use,” NHL Commissioner Gary Bettman said in a statement announcing the ESPN deal.

The best news is that these deals provide another injection of revenue that will allow the NHL to continue the substantial growth it has enjoyed over the past 15 years and to provide sufficient financial support to its crop of budding young superstars for years to come. The league has more than doubled its annual TV revenue – from about $300 million to more than $600 million – thanks to the deals, which should provide the sport with more exposure than ever in the United States.

This was an enormously important deal for the NHL, the least profitable of North America’s four major professional sports leagues, coming on the heels of a pandemic that has had crippling financial impact on many previously successful businesses and industries.

It looks like Bettman hit a home run with these negotiations, though, and for once everyone – including the fans – wins.

If you weren’t ready for the 2021-22 season or weren’t excited for it, a little research into all the new viewing options should be enough to get you pumped up for tonight’s openers and what should be an exciting return t near normalcy – with games being played in full buildings again – this season. And on top of that, we get to see the best in the world competing for gold at the Winter Olympics in February.

It’s been a rough two years for all of us – hockey fans and non-fans alike – but we’ve persevered and made it through. The payback starts tonight.

A week ago, I had no idea what these new television deals meant for the league or its fans, but right now I couldn’t be more excited. Now, if only we could get Charles Barkley on board for the TNT studio show.