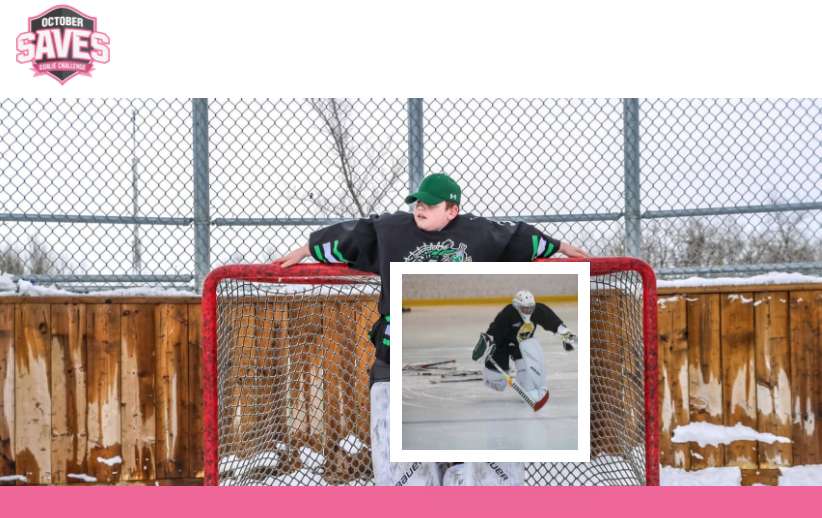 Hockey Comes Through to Fight Cancer in Difficult Times

Editor's Note - The amounts raised by the individuals named in this article are based on the current totals at these links;

One thing we’ve learned over the years is that you can always count on the North American hockey community. No matter how dire the circumstances or how daunting the situation, the hockey family always seems to come through.

This has been true even amid the craziness we’ve come to expect in 2020.

With the waning days of Hockey Fights Cancer Month upon us, the final tallies from the October Saves program to fight cancer are in, and the results are eye popping.

COVID or no COVID, ice-hockey goalies, inline-hockey goalies, street-hockey goalies, gaming goalies and people who just wanted to stop some pucks for the fun of it to support a good cause stepped up all over the continent to raise more than $410,000 that will be used to fight pediatric and breast cancer.

Not bad for a sport and program that faced a very uncertain future as summer approached. With ice rinks all over North America pretty much shut down at least for part of the summer, there were no guarantees that a hockey season or October Saves would happen at all in 2020.

Laura Hopewell, CEO and founder of the October Saves program, was determined to push forward no matter what, taking a glass-half-full approach with the understanding that any amount of money raised under such trying circumstances would be a bonus and still help the cause. The end result far exceeded even her wildest expectations.

“We are absolutely thrilled with how the event went this year,” Hopewell said early last week. “We raised the second-highest total in our history, during a pandemic, and money is still coming in.”

Adding to the excitement was a frantic race to the finish to determine which goalie would be the top fundraiser in both the United States and Canada. The leads changed hands several times as the final deadline for donations to be collected approached, and the outcome wasn’t clear until the very last minute.

“It was a duel between the top-two fundraisers in the final hours,” Hopewell said. “Emeline Grennan from the Washington Little Capitals was in first for most of the event, but on the last night she and Raffi Podnieskinsi of the {Keene, N.H.} Cobras and Islanders went back and forth by the minute until the final seconds. Raffi ended up coming out on top with $22,291. Emeline raised $20,547. We have never had any goalies raise over $20K, and this year we had two. Together they raised more than $10,000 in the final three hours. Amazing!”

Raffi is a 10-year-old squirt goalie who wasn’t raising money in honor of anyone in particular, but he did tell SentinelSource.com that parents of some of his friends have been lost to cancer. Emeline is a girl who plays on an all-boys 2007 birthyear Little Caps AAA team. She raised money in honor of Kay Lauren Miller, a former teacher of hers who fought breast cancer.

The tension was just as high north of the border, with the top-three goalies jockeying back and forth in the fundraising standings right up until the final deadline on the final night.

“We had to do a detailed audit by the second to actually determine the final winner,” Hopewell said. “That’s how close it came.”

In Canada, Landon Friesen, a 13U player with the Sherwood Park Minor Hockey Association, raised $4,130 to edge 13-year-old Riley Orris ($4,117) of the Sault Major Hockey Association and Clarington Flames Atom AA netminder Olvia Tronstad ($4,095). According to his association’s Facebook page, Landon has lost a classmate and two grandparents to cancer, while a close family friend who is about his age has been fighting the disease since February.

While Emiline and Olivia didn’t quite finish on top of the fundraising heap in their respective countries, they set a new standard to which all future female goalies can aspire.

In a normal year, goalies can get donation pledges for each save made during their October games. They also can solicit larger, flat donations. Donations usually are made by family members, family friends, teammates, teachers, classmates and co-workers of parents, although anyone can give.

This summer, with the uncertainty surrounding the 2020-21 season, Hopewell and her team came up with the “All Saves, One Goal” campaign. At that point, with so many teams only being allowed to practice – and some still not being allowed back on the ice at all – the program was changed to let “All Saves Count.”

Whether a save was made during a game, in practice, in the driveway, in the backyard, in a roller-hockey game, in a street-hockey game or in an adult or youth rec-league game, all saves during the month of October could be recorded to determine a participants’ final amount raised. And for the first time ever, fans of the sport who don’t play hockey were able to participate by counting any saves they made while playing video games.

That all added up to a near record-breaking campaign under the most difficult of circumstances.

“We honestly feared we would barely raise $100,000 – which would still have been awesome – so we are absolutely stunned that we raised $410,000,” Hopewell said. “We didn’t even have $300,000 in our minds for this year, so you can imagine how excited we are about $400,000. The most amazing thing is that we understandably had a lower number of participants, and they still managed to raise this total.”

Video gamers ended up contributing more than $1,200 to the final total, and Hopewell said the number of larger, individual donations was much higher than usual, something that was completely unexpected.

“These goalies faced rinks closing, teams quarantining, states locking down and so much more, but they just leaped over every hurdle,” she said. “The donors were incredible, too. Kids were getting $1,000, $2,000 and $3,000 donations regularly. We've never seen that before, and it's still a bit of an awesome mystery. All around, it was an impressive effort by the hockey community. We knew we could end 2020 on a positive note.”

Top fundraisers compete for prizes that include a customized goalie helmet, leg pads and a goalie stick, and there are awards for different levels of fundraising as participants reach the $250, $500, $750, $1,000, $1,200, $1,500 and $3,000 plateaus. Any goalies who raise more than $1,000 are entered into a raffle to win a week at one of Mitch Korn’s famous goaltending camps, and a virtual goalie-training aid called “Goalie to Go” made by Sense Arena and valued at several thousand dollars goes to the top overall fundraiser in North America.

Funds raised by the program are distributed to these organizations, and this year money also will go to three COVID emergency funds – The Pink Fund, Lungevity and Family Reach – for people who have cancer and are struggling to pay for treatments or other related expenses because they lost their jobs or were otherwise impacted by the COVID-19 outbreak.

“It’s so rewarding to see our event weather the storm and come out so strong,” Hopewell said. “These goalies and their families are the best, and I'm truly in awe of them on and off the ice. We are already planning for next year and we've got some fun ideas up our sleeve.”

CLICK HERE to find out more about October Saves.