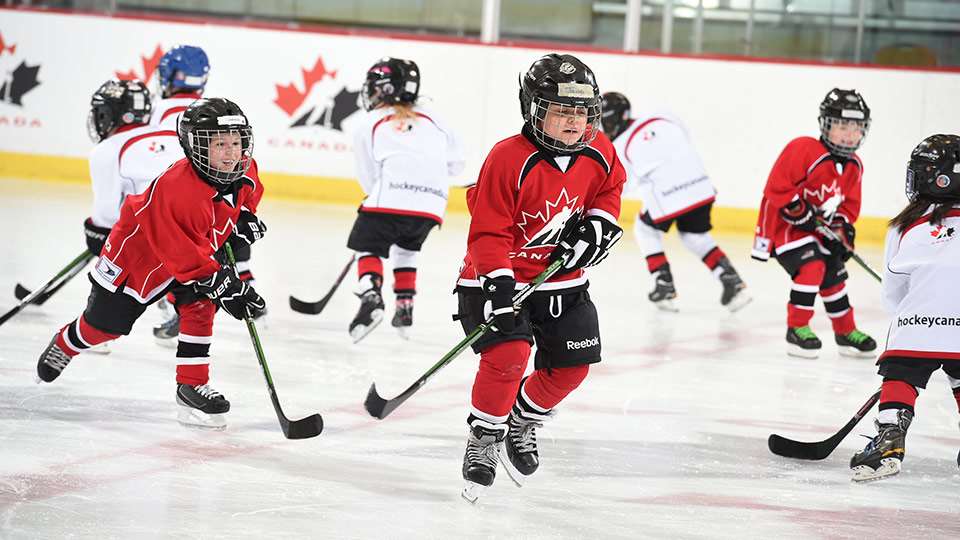 As the United States prepares for its third weekend of youth hockey in various parts of the country following USA Hockey’s decision to sanction the 2020-21 season, many areas of hockey-crazed Canada are finally allowing their young players to get back on the ice.

It’s not surprising that Canada has taken a more cautious approach toward hockey’s restart given that the country has been much more conservative than its southern neighbor in how it has handled the COVID-19 outbreak and reopening the country in general. It’s also not a big secret that Canada has been much more effective than the U.S. in flattening the curve and slowing the spread of the coronavirus.

Thus, it’s hard to question Hockey Canada’s gradual return-to-play approach. After shutting down play across Canada last March, including its national championships, Hockey Canada cancelled its own national-team tryout and development camps, tournaments and events, including three events scheduled for the upcoming fall.

“At various rates, provinces from coast-to-coast-to-coast have started moving ahead with their phased re-opening, but as it has been since the season was cancelled, Hockey Canada’s priority remains the health and safety of all participants and the general public,” said Hockey Canada CEO Tom Renney and President/COO Scott Smith in a joint statement. “We believe the decision to cancel these three events is the safest decision given the ongoing uncertainty of the pandemic at the local level, as well as the international implications associated with these events.”

While the cancellation of those events further confirms Hockey Canada’s commitment to a completely safe return to hockey activities across the country, the nation’s governing body left the ultimate decision on how and when to return to the rinks in the hands of provincial and local jurisdictions back in June after releasing its nationwide return-to-play guidelines.

Renney and Smith also issued the following joint statement June 4: “After ongoing discussions with the board of directors, our chief medical officer, the 13 members and public health authorities across the country, it has been determined that the best approach for a return to hockey in Canada is to allow each member the opportunity to work with authorities in their respective regions to determine when it is safe to return to the ice in areas that fall under their jurisdiction. We expect the timing of each member’s return to hockey will be different, but will be based on the advice of their government and public health authority.”

Taking Hockey Canada’s lead, most provincial and local governing bodies have developed their own gradual return-to-play plans that have seen players in many areas across the country return to the ice in cohorts for small-group skills sessions, and in some areas, limited-contact team practices in recent weeks. In addition, many Canadian junior hockey leagues have issued targeted start dates for their 2020-21 seasons.

As always, if you have questions about the status of youth and junior hockey in your area, please contact your provincial or local governing body or league administration for information. Hockey Canada has posted links to information for each province on its website. CLICK HERE and highlight the top menu item labeled “Provincial and Territorial Updates” then scroll down to locate information pertinent to your area.

Here is a quick look at what’s going on around Canada:

British Columbia currently is in Phase 3 of its reopening plan, which bars gatherings of more than 50 people in any facility while acknowledging that 50 may be too many to provide for adequate social distancing in some athletic venues. Maximum group size counts should consider staff, coaches, participants, spectators, etc., and the size of the indoor or outdoor space being used

Phase 3 means that B.C. will “progressively loosen COVID restrictions,” leaving it up to local sport organizations to develop their own specific sport guidelines before resuming activities. While Phase 2 included small-group, non-contact training, BC Hockey stipulates that Phase 3 can include increased group sizes, small-group contact drills, and local or regional game play with limited spectators.

A move to Phase 4 would allow for full-contact game play with no limitations on spectators and increased travel for teams.

Hockey in Alberta currently is in what has been described as a “Development Season” until further notice – at which point it move into a “Modified Competition Season,” which would begin no earlier than Nov. 1.

As of right now, AAA teams are allowed to hold tryout sessions using physical distancing to determine which players to bring into a cohort of no more than 50 people. Non-essential travel is restricted, with players participating only in programs located in their immediate geographic areas that limit physical distance and practice “cohorting.” Cohort sessions can include skills sessions, practices, off-ice training and limited contact games. Tournaments are not permitted. Teams at levels other than AAA also have returned to the ice under similar guidelines.

Once Alberta moves to a “Modified Competition Season,” teams will be grouped into regional “pods” of three to five and will only play within their pods. Team sessions will remain similar to the “Development Season,” allowing organizations to finalize their rosters in preparation for a full return to play. Tournaments, seasons, scheduling and travel restrictions are yet to be determined for that phase.

As of Aug. 12, Saskatchewan entered an “Identification and Training Phase,” which allows minor hockey teams and leagues to host identification camps with a 50-person limit to include coaches, staff, instructors, participants, officials and volunteers. This number does not include spectators and others who can maintain physical distancing. A total of 30 of the 50 can be on the ice at one time.

Once teams are formed, they are restricted to practicing together, with no games being sanctioned until approval is granted by the provincial government and health authority.

Outside of the province’s four larger cities, teams will be formed in the following manner:

Now in Phase 2, Manitoba allowed players to return to the ice as of Sept. 1 following the protocols set forth by Hockey Manitoba. Sanctioned hockey tournaments and events will not be permitted until Nov. 1 at the earliest. This means that Manitoba’s 15U AAA male and female showcase scheduled Oct. 2-4 has been cancelled. Travel-permit requests to venture outside Manitoba will not be accepted until Oct. 15 and only will be granted for travel after Nov. 1.

Phase 2 consists of non-contact on-ice skill development, drills, team tactics, online and in-person clinics and tryouts. The move to Phase 3 must be sanctioned by Hockey Manitoba and will include regular-season competition, full-contact games, full-contact practices and approved travel.

Ontario’s return-to-play plan is broken down by region as follows:

For Northwestern Ontario, activity on the ice can begin on or after Sept. 14.

“The rules will be in place for all divisions of amateur hockey — from the IP1 class to senior men’s hockey. The Superior International Junior Hockey League already announced it would be starting its season in November, while the Thunder Bay Kings AAA and Queens AA programs have booked tryouts for September. The Lakehead Junior B Hockey League’s return timetable will be similar to the SIJHL’s.

Spectator attendance, per Ontario guidelines, is limited to 50.

The Ontario Hockey Federation currently is operating in according to Stage 3B, which means a maximum of 30 participants can be on the ice at one time, including instructors. This number may be lower if mandated by a local government or a facility. Physical distancing is required.

Following a minimum two-week on-ice phase, modified 3-on-3 or 4-on-4 non-contact play may begin. Leagues may have no more than 50 players, with all play occurring within the local Public Health Unit. All game play must be conducted within local and facility COVID guidelines.

The next phase, Stage 3C, allows for more on-ice participants and 5-on-5 non-contact competition with the possibility of playing teams outside the PHU, and Stage 4 would bring a return to “Traditional Hockey.”

Hockey Eastern Ontario is in Stage 3, which also requires on-ice play that includes no physical contact and must include only players in the same league or cohort. Physical distancing is required on the ice, on the bench and in the locker room. Travel, tournaments and jamborees are not permitted.

Stage 3 will continue until at least Oct. 1, with a focus on skating and puck skills and with modified scrimmages permitted. Team tryouts within mandated guidelines are allowed. A move to Stage 3B would allow for more participants and not require on-ice physical distancing. Deliberate body contact still wouldn’t be permitted and modified game play to include 5-on-5 would be allowed within mandated guidelines. Spector numbers will be determined by public health guidelines and competition will remain within player cohorts.

“Traditional hockey” would resume in Stage 4.

Quebec’s return-to-play plan includes six phases, and the province currently is in Phase 5: “Hockey Quebec modifies and adjusts its plan to return to hockey on a daily basis following new government directives as well as public health, to eventually achieve a gradual and progressive return to ‘normal’ (phase 6).”

Since Aug. 3, as many as 250 spectators wearing face covers and maintaining physical distancing have been permitted inside Quebec hockey facilities. Contact is not permitted during game play, with 5-on-5 and 4-on-4 competition permitted within the region and bordering regions. A “bordering region” is a region you can travel to and return from in the same day, but approval for this type of competition is required from Hockey Quebec.

There are different restrictions in terms of the number of players permitted to participate and how the ice will be divided for any one session based on age groups and the level of play.

Starting Sept. 1, once an age group within a minor hockey association has completed two weeks in Phase 1 of the province’s return-to-hockey guidelines, it will be permitted to move to Phase 2 while still following local and facility guidelines.

Phase 1 consists only of skill development with on-ice physical distancing, a limit of 25 players and six coaches on the ice and no travel. Phase 2 includes skill development, competition and small games with limited contact and up to 36 skaters and eight coaches. Modified 3-on-3 and 4-on-4 games can be played during practice, and travel is not permitted.

Once teams are permitted to move to Phase 3 by Hockey New Brunswick, that will include normal practice and game play with travel restrictions, full contact, no limit of players on the ice and associations “bubbling” with other associations to provide for expanded competition.

Regular competition and travel will return in Phase 4, with tournaments permitted in Phase 5.

The Hockey PEI Board of Directors recently recommended a move to Phase 2 of its return-to-hockey plan, effective September 15, 2020.

After two weeks in Phase 1, Phase 2 will include the following:

Dates for moving to Phase 3 and 4 have not been set and will be communicated as they are determined.

Nova Scotia continues in Period 1 until at least Oct. 1. Provided public health guidelines do not change, the current recommendations encourage programs to limit their groups to 10 players. Physical distancing is not required in groups of 10. Also recommended:

Period 2 will include tryouts, with increased participant and spectator numbers permitted and games against teams from the same association permitted. Period 3 is considered a “return to normal,” with 5-on-5 league play allowed and no spectator restrictions.

After an off-ice training program for parents, players and coaches, Newfoundland and Labrador have moved from Phase 1 to Phase 2, which lasts for two weeks and includes:

After two weeks in Phase 2, a move to Phase 3 is permitted, allowing for games and practices. Phase 3 will remain in place until the approval is granted to move to Phase 4. It includes 5-on-5 two-line games within a team, “bubbles” consisting of five groups of 10 players and a goalie, minimized faceoffs and stoppages in play, a maximum of 30 people on the ice, physical distancing on benches and in locker rooms and no association mixing or inter-league play.

Phase 4 is considered a “return to normal.”