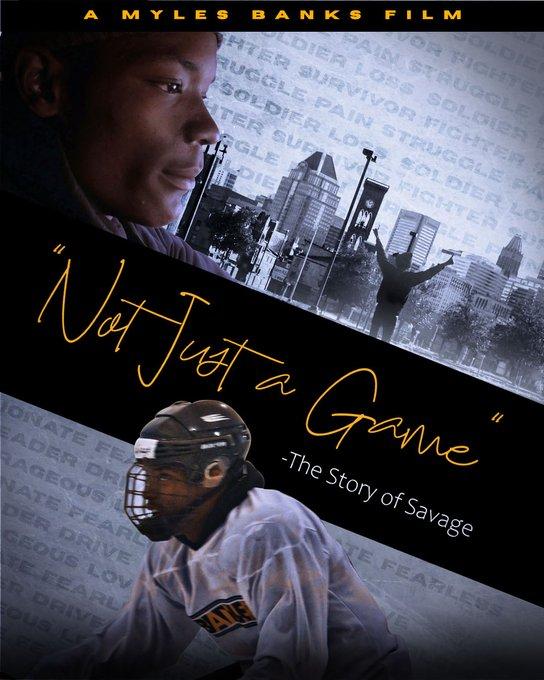 Documentary Shows Hockey Can Make a Difference for Inner-City Kids

A young man who has spent most of his 19 years navigating the perils presented by two of Baltimore’s toughest neighborhoods, “Savage” has seen enough to know that he wants to do better – for himself and his family.

And his experience learning and playing the game of hockey with the Baltimore Banners, a program that gets high at-risk youth off the streets and onto the ice, has fueled that desire and shown him that he can accomplish whatever he sets his mind to.

That is the central theme of a 15-minute documentary entitled Not Just a Game – The Story of Savage, which premiered this week via an online screening presented by the Peale Center in Baltimore, MD, and was produced by Myles Banks’ Just Stunt Productions.

Tyrone “Savage” Carey spent the early part of his childhood in West Baltimore, an area that has a reputation for violence and drug-related crime that overshadows its remarkable history and culture. It was there that he found himself living on the edge and in trouble often enough to be heading down a path from which he one day might not return.

“The judge told me if I wanted to move in with my mom, I needed to calm down,” Savage says in the film, estimating that he had faced charges “five, six, seven times."

That was when he began searching for ways to do good, be productive, put food on the table and stay out of trouble. He took to the streets as one of West Baltimore’s “squeegee boys,” offering to wash motorist’s windshields as they waited at neighborhood stoplights.

Squeegee kids are well known around Baltimore, with many citizens understanding of the socio-economic conditions that force the youngsters to look for creative ways to make money. They are viewed by many as enterprising entrepreneurs doing whatever it takes to help themselves and their families.

And while it certainly beats some of the more dangerous and illegal options inner-city kids can choose from to generate income, there still are plenty of people who see the squeegee boys as dangerous and a nuisance.

“I never took it seriously,” Savage says of his squeegee days on the west side of the city, “because people at school were always clowning me for doing it. So I left it alone.”

A move across town to East Baltimore changed his mind.

“I live over here now and probably won’t see anyone from over there now,” Savage recalls thinking after he moved. “So what, I’m worried about what the next person might say?”

That spirit motivated him to take the business more seriously, which ultimately led him to Noel Acton, Director of The Tender Bridge, a non-profit organization with the mission of closing the gap between kids who need help and the numerous available programs that offer help, but may not be effectively reaching some of Baltimore’s most at-risk children. The main thrust of the organization is to provide seriously life-challenged kids with an opportunity to feel better about themselves.

Acton, who has been working to help Baltimore inner-city youth for 18 years, spotted Savage and his squeegee team members working their block, which happens to be located near the Baltimore Juvenile Detention Center. He approached them and offered some friendly advice.

“I just talked to them about how being more customer friendly could make them more money and got them name tags and business cards, helped them form some rules,” Acton recalls.

Not too long after that Acton was back on the block trying to convince Savage to come learn to play hockey with the Baltimore Banners, a program managed by the The Tender Bridge which provides free ice time and equipment to inner-city kids who want to try the sport. The Banners play out of the Mimi Di Pietro Skating Center, a city-managed facility located in East Baltimore’s Patterson Park.

Participants in the program range in age from 7 to 20, and nearly 700 young people have attended sessions at one time or another. Coaches drive the players to the rink, help them with their equipment and provide advice on and off the ice. Off-ice coaches mentor participants via group and one-on-one meetings as part of the Bridge to Independence program.

“He asked me something about going to try hockey equipment,” Savage remembers. “When I heard equipment I thought he was talking about football.”

Acton recalls telling Savage, “’You don’t have to know how to skate. We’ve got a lot of coaches to teach you. Come and learn to play hockey.’ He came and got started and just took off.”

Savage was hesitant to try hockey at first. The program, which offers ice time on Saturdays and Sundays in the fall and winter, was a few weeks into its season before he showed up. Once he was there and got on the ice, though, there was no holding him back.

“I ended up getting my equipment and all that,” Savage says. “got to see how everything is, and after a couple of practices I started liking it.”

Antoine Green is one of the Banners’ off-ice coaches who is a leader of the Bridge to Independence meetings. He and Acton also serve as unofficial team equipment managers and helped get Savage suited up to take the ice upon his arrival.

“He was very interested,” Green says. “He really wanted to learn hockey, and he threw himself full force into it – maybe a little bit too fast, because he was kind of tripping over himself when he first started.”

Savage remembers skating initially and being able to move and stay on his feet pretty easily. But that all changed with the hockey gear weighing him down.

“When I was playing around skating I didn’t fall down one time,” he says. “When I was down skating with all the hockey equipment and all that I was falling a couple times. It took a couple of coaches to try to help me, but it was only coach Taylor who was giving the real help. Instead of him telling you, he shows you why he was telling you, or he’ll grab something from right here or right there and say, ‘We’ll use this to try to figure out how we’re going to do it to see how to move.’”

Coach Taylor is Taylor Handleton, one of the Banners’ on-ice coaches. He had Savage push a goal around the ice to help him understand how the skate’s edges work and help with his balance. Handleton remains amazed by the young man’s drive and determination.

“Constant will to keep getting better and keep going,” Handleton says. “It’s awesome.”

The film bounces back and forth between clips of Savage walking, talking and working in his East Baltimore neighborhood and scenes from the ice rink. In both places it’s easy to see the program’s impact on him. On several occasions he’s seen at work on his squeegee block, providing customer service with a smile per his business discussions with Acton.

“Thank you honey; have a good one,” he tells one customer. And to another he says, “Thank you sweetheart; have a great and blessed day.”

Shifting to the rink you can see Savage assuming a leadership role, both with his younger brother and the other players. He lends a helping hand with equipment, gives pep talks and always seems to be a positive voice in the locker room and on the bench.

“We talked among ourselves on the board {of directors},” Green says, “and we were like, ‘What do we do now? We can’t just feed them into the world without preparing them.’ So we started the Bridge to Independence. We can help them through guidance and counseling to be independent parts of society – independent, productive parts of society.”

In addition to providing life lessons, the Banners and Bridge to Independence programs keep participants away from the dangerous streets and focused on developing aspects of their lives that will benefit them for the long term.

“The Baltimore Banners ice hockey program has helped me a lot, along with some friends, too,” Savage says. “I know that it helped a lot of us … and I wish we had more programs like it. I wish other people could look at us like, ‘Okay, they’re trying.’ It was keeping me out of a lot of trouble. A lot of people died. I was at hockey practice or got In a car and somebody on the block had died or something. If I wasn’t at that spot at that time, I probably could have been the one that died.”

During the film Savage tells the story of his own brush with death. One day after work he went to a nearby gas station to get his money changed. Apparently he walked in on an attempted robbery. A gun was pointed at him. The trigger was pulled. Click. The gun didn’t fire. The robbers got away with his phone, while Savage got away with his life.

“I’m just trying to succeed in life,” he says. “I’ve seen what the fall back can look like. I’ve seen what can cause you {to have} nothing, and I know what can get you this and get you that.”

By all indications on and off the ice, Savage has what it takes inside of his heart and head to be a success.

“He never gave up and always kept pushing,” says Handleton. “I think he’s starting to realize that’s a skill that can be applied off the ice, too. You’re going to fall down and have to get back up, but if you let that discourage you, you’re never going to do what you want to do. But he pops right back up and gets right back to it.”

Acton has been working with at-risk kids for a long time and says Savage has what it takes to be successful.

And after viewing the premier of the documentary along with the general public, producer Myles Banks, Acton and Green, Savage provided some more words of wisdom that we could all benefit from during these turbulent times.

“I’m still pushing forward to this day,” he said. “All I really want to do is show I’m a good person and say don’t judge a book by its cover, because a lot of people just look at me like I might be a terrible person or whatever. I’m a good person, got a kind heart and am just trying to do right for myself and my family and to tell other people do try to do right as well.”

Another screening of the documentary, Not Just a Game – The Story of Savage, is being held the weekend of Aug. 1-2. If you are interested in viewing it, email the producer, Myles Banks: Producer@juststuntproductions.com.