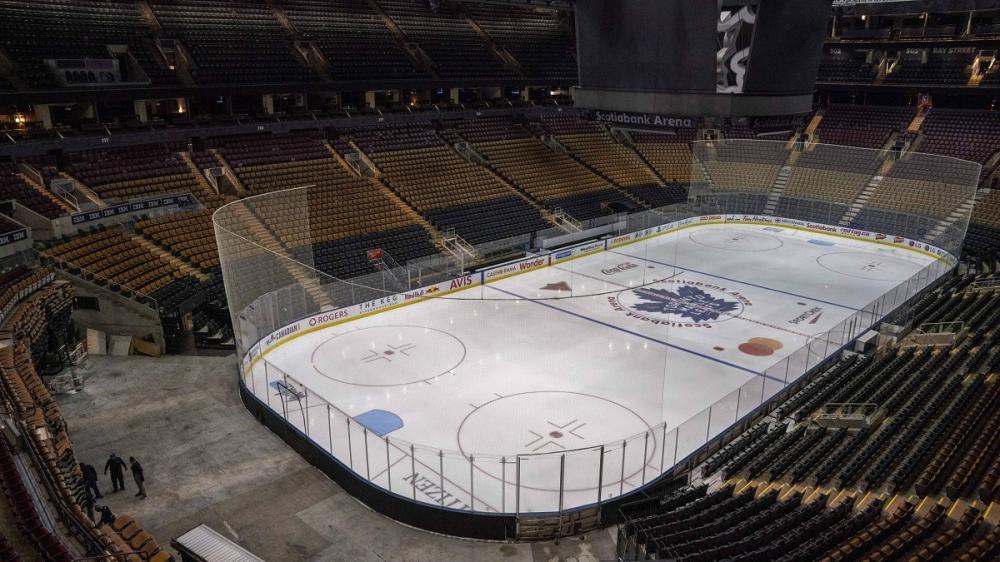 Welcome to the Bubble!

A few years ago the National Hockey League ran a promotional commercial that showed stars from various teams running amok in a hotel and wreaking havoc while wearing their team jerseys.

Many of us as hockey parents could relate to this scenario since anyone who has ever been part of a youth team sequestered in a hotel for a weekend tournament can attest.

The commercial featured a pillow fight between the Staal brothers, players tossing water balloons off the balcony, Joe Thornton stuffing his face with chocolates from the housekeeping cart, Phil Kessel getting pushed down the hallway on a luggage cart, players playing pranks on each other and a four-man knee hockey game In the hallway that ended with a broken vase.

Yep. We can all relate.

Throughout the promo Alex Ovechkin can be seen at various times ordering enough food to feed his entire team. When asked his name, Ovechkin says, “Sidney Crosby” and quickly puts the phone down. Moments later Crosby is seen receiving a ginormous room-service order, to which he responds, “Ovechkin!”

It’s a commercial that has resurfaced on the internet in recent months thanks to so many people having more free time than usual during the lockdown. Many of us had forgotten about it, and it certainly added some levity to being quarantined, but it also causes many to take pause and say, “That would never happen. Those players would never stay in the same hotel.”

On or about Aug. 26, the 24 teams that will be competing in this year’s reformatted NHL Playoffs will board charter flights and head to Edmonton or Toronto, selected by the league as postseason hub cities, where they will live and play together in what the league is calling “secure zones,” but what the rest of us have come to know as the “bubble.”

“It’s almost like going back to being a kid again and going into a tournament where you’re watching the other teams play right after you,” Boston forward Brad Marchand told reporters on a recent Zoom session. “You finish your game and go watch the next one, and all the kids stay at the same hotel. This is more like being a kid than anything else except you’re not allowed to go anywhere or do anything other than play hockey, which is a good thing, right?”

Because only a little more than 80 percent of the league’s schedule was played and several playoff berths were still up for grabs when the season was halted by COVID-19 on March 12, the NHL decided to include the top 12 teams from each conference in this year’s postseason tournament.

The top-four teams by points percentage in each conference will play a round-robin mini-tournament to determine the order of the top-four seeds. While that is going on, seeds five through 12 will compete in best-of-five series for the right to advance to the round of 16. From that point on, each series will be a best-of-seven format with the teams being re-seeded after each round.

Western Conference games will begin Aug. 1 at Rogers Place in Edmonton. Eastern Conference contests will be played at Scotiabank Arena in Toronto, also beginning Aug. 1. The television schedule hast not been released, but it looks like fans could have anywhere from 12 to 15 hours of hockey to watch per day early in the tournament.

Training camps opened July 10, and each team will play one exhibition game between Aug. 28-30. Players had 72 hours to opt out of the tournament for personal reasons once the collective-bargaining extension and playoff format were ratified, and to date six players have decided not to play, with the biggest names among that group being Calgary’s Travis Hamonic and Edmonton’s Mike Green.

The NHL chose Canadian cities as hubs because Canada has done a much better job controlling the spread of the coronavirus than the United States. Still, the league has gone to great lengths to develop stringent guidelines – including possible fines and lost draft picks for teams that violate protocols – to ensure the health and safety of participants and staff members.

Those guidelines start with the secure zones or bubbles that include the arenas, practice facilities, hotels and other areas within the hotels such as bars, restaurants, swimming pools and fitness rooms.

This is where it gets interesting.

Multiple teams have been assigned to each tournament hotel, with an entire team being placed on its own floor. The top-five teams in the East – Boston, Tampa Bay, Washington, Philadelphia and Pittsburgh – have been assigned to Hotel X in Toronto, while Carolina, the Islanders, Toronto, Columbus, Florida, the Rangers and Montreal will be staying at the Royal York.

For the Western Conference, the top six teams – St. Louis, Colorado, Vegas, Dallas, Edmonton and Nashville – will be at the JW Marriott, which connects to Rogers Arena, while Vancouver, Calgary, Winnipeg, Minnesota, Arizona and Chicago will stay at Sutton Place, also a short walk to the arena.

Capitals coach Todd Reirden was asked if this type of arrangement would have worked during his playing days in the late 90s and early 2000s. His response was preceded with a laugh.

“It was something you were always cautious of, not being in the same hotel as another team,” he said. “Sometimes your travel might take you in a night early when the opposition is still in a hotel. That was frowned upon years ago, and I think it’s happened a little bit more often the last couple years. This is going to be a new experience for sure, especially with your biggest rivals right there in the same hotel with you and with the four teams from the round-robin being in the same hotel. This is what it takes. We’re just all happy to play hockey during all this and to provide some entertainment and get back to some normalcy in our world. That’s how it will be viewed. There may be some head down staredowns occasionally with the opposition, but I don’t expect it too much.”

While the NHL has released its bubble and testing guidelines for when games resume, many of the players who have been questioned about life in the bubble aren’t sure what to expect.

Bars, restaurants and hotel common areas will be available to the players as long as masks are worn and social distancing protocols are followed. Each player and staff member will have his own room, but visitors, including teammates, are not allowed. That would eliminate in-room video-game tournaments, but with technology these days those can be played remotely anyway. It seems likely that teams would request large meeting rooms or book some larger suites where players can hang out together and remain socially distanced.

“I’m not exactly sure what we will be allowed to do, but I do know that we will pretty much be locked down in our rooms, so for me there will be a lot of Facetime with the family,” Capitals forward T.J. Oshie said. “The worst part about this is not being able to see our families. Hopefully we can hang out with the guys in rooms. It’s going to be different and going to be kind of like being kids again where we can’t drive and can’t do anything but just hang out at the hotel with teammates. Our team always finds a way to have fun, so hopefully we can enjoy ourselves and play some exciting playoff hockey.”

Marchand said, given the circumstances, he feels lucky to even have the chance to compete for a Stanley Cup.

Team training camps are being held with players following similar stringent guidelines, so they are becoming used to frequent testing, not showering at the rink, wearing masks off the ice and basically shuttling only between the practice facility and home. Once the playoffs get underway, with games and practices basically every other day, players likely won’t have much time or energy to do more than rest and recover, anyway.

“I think the schedule is going to be pretty tight, so I don’t think there’s going to be a lot of time other than recovery, relax a bit and prepare for the next game,” Capitals defenseman John Carlson said. “I think everyone involved has done a phenomenal job of doing everything to make sure that we’re safe, and I think we all really appreciate that and are just excited to get there and play hockey.”

As for the specific guidelines the league has put into place when games resume, they look like this:

It will be different. It will be interesting. But no matter how you slice it, we’ll be watching Stanley Cup Playoff hockey in August.

And maybe, just maybe, Crosby will get Ovechkin back.