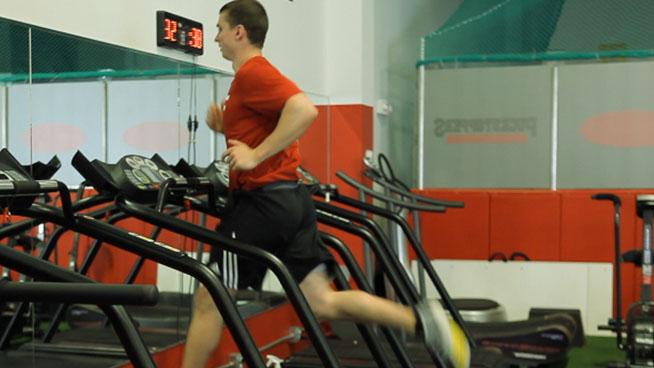 Time to Tune Up for Tryouts

It’s happening a little later than usual, but with more ice rinks around North America opening every day, we are finally getting some firm dates for junior, AAA and AA hockey tryouts.

For those kids who are going stir crazy, have been keeping up with off-ice workouts and have stickhandled a golfball around three plastic cups for the 1000th time, this is great news. They couldn’t be more excited or ready to get on the ice.

But for the others, those who might have let their conditioning slide and didn’t keep their hockey muscles active during quarantine, the prospect of jumping right into tryouts can be a little bit scary.

There is still time to play a little catch-up and put in some work that will help once tryouts get underway. Rinks in most areas are still under restrictions as far as the numbers of skaters that are allowed on the ice at one time, so you most likely still have a little time to prepare before full tryouts will take place.

We have provided a couple of treadmill workouts at the end of this article that can help you get on track physically before most tryouts begin.

Taking a quick glance around the hockey world, it appears as though tryout dates are highly dependent upon where you live. In the United Staes, some USA Hockey districts and affiliates allowed Tier 1 contracts to be offered without tryouts. Others allowed Tier 1 contracts to go out on one date and Tier 2 offers to be sent out 10-14 days later. Most teams in these areas still plan to hold some kind of supplemental tryouts to fill their final roster spots so they aren’t blindly picking a full team, and a lot of locales are waiting until Tier 1 rosters are full before Tier 2 tryouts can happen and contract offers can go out.

There are other areas that have allowed Tier 1 teams to fill up to a certain percentage of their roster spots, with an open tryout for the remaining spots to be held followed by Tier 2 tryouts. And in some parts of the country tryouts were just pushed back to July and August in an effort to make sure that a full and equitable opportunity was available to everyone.

COVID-19 also turned the world of junior tryouts upside down. Many large combines usually held by Tier 1 and 2 U.S. junior leagues were cancelled or postponed, with the USPHL finally holding its Midwest NCDC combine last week for more than 200 players in Indiana.

Tier 3 junior teams often hold tryouts and ID skates in April and May with the hopes of having their rosters close to finalized by June 1. Those teams tend to leave a few open spots for players who don’t quite make the cut or don’t like their roles at the Tier 1 or Tier 2 levels.

This year, many of those teams relied on video, their scouting staffs and opinions of hockey people they trust to start making offers in April. A lot of the top Tier 3 programs have only a few – if any – spots remaining and will fill most of those with players they see at summer showcases such as the USPHL Summer Showcase July 17-19 in Marlboro, Mass., as well as the Chowder Cup and Battle of Boston, both scheduled for July 23-26 in Massachusetts – along with those players who don’t survive higher-level junior cuts.

If you look around the internet on the EHL NA3HL and USPHL websites in particular, you will still find some Tier 3 teams that are holding summer tryouts.

Main tryout camps that are usually held by Tier 1 USHL teams in June or July are now being held in July and August. That level has probably been affected the least by the COVID shutdown, but that is not the case for the U.S. Tier 2 leagues.

Both the NCDC and NAHL, the only two tuition-free Tier 2 leagues in the U.S., hold their annual entry drafts in the spring, with the NCDC drafting in late May and the NAHL in early June. Teams use the month preceding those drafts to hold predraft camps, which provide an opportunity to see many players their scouts have recommended compete in person and allow them to finalize their draft boards.

This year, both leagues expanded and moved the dates of their drafts. The NCDC rescheduled its draft for June 10 without the luxury of any predraft camps, while the NAHL added a three-round supplemental draft in May so teams could secure the players they were most interested in while also providing an opportunity for more players than usual to be drafted with the rescheduling of the full entry draft for July 21.

Pushing the draft back to July allows NAHL teams to hold predraft camps between late June and early July while pushing their main camps, which are usually held throughout July, later in the month and into August.

So no matter what age group or level of play you are talking about, there are some important tryout or exposure opportunities coming up in the next six weeks for players who have seen little or no ice time since Mid-March.

The biggest concern for players who haven’t been on the ice is their cardiovascular conditioning. Nothing compares to the type and level of fitness needed to play high-level hockey. You can run 1,000 miles and think you are in peak condition until you skate that first lap wearing 10 lbs. of equipment and suddenly your heart feels like it’s going to jump right out of your chest.

Fortunately, the days of coaches telling you to go run five miles are in the past for hockey players. That’s not the type of cardio training the sport demands. Hockey players don’t want long, lean muscles that endurance training produces. They want to build powerful, explosive fast-twitch muscle fibers that allow them to play at a high speed and exert maximum effort for 45 seconds to a minute.

The best way to simulate the cardiovascular demands placed on hockey players is through interval running that maximizes the player’s ability to go hard for short periods of time and recover quickly in between shifts. The goal is to provide cardio workouts that will most effectively simulate what you will be doing on the ice and prepare you to be more prepared for the rigors of tryouts.

This may be even more important than ever this year given that most of our readers will have seen very little ice time during the months leading up to tryouts. Unfortunately, with tryouts having been delayed and coaches needing to pick their teams, many players will be thrown into competitive situations pretty quickly, so hopefully over the next few weeks – with gyms also starting to open – the interval treadmill running programs at the end of this article can help players feel better about their fitness level heading into tryouts.

Keep in mind that if you don't have a treadmill you can do the workouts outside at a track or in your neighborhood. Doing them outside actually can help you learn your maximum level of exertion and how far you can push yourself when you are not relying on the treadmill to push you. As you become more fit, you also can include some small inclines and eventually steeper hills to challenge yourself more whether you are using a treadmill or running outside.

How to check your heart rate

A few things to keep in mind with this workout:

You won’t be able to do the full workout or reach the top speeds the first time. When you get to the highest speed you can handle, stay at that level and reduce your intervals down to 15 seconds and then do your cool down. If you never get to 12 mph, which is a pretty good sprint, that’s okay. This is about YOU and challenging yourself.

You can alter this in any way to make it harder or easier to fit your personal level of fitness and goals. Start slower. Do more lower-speed intervals at first. Whatever you need to do to get through it and still challenge yourself is fine.

This whole workout will take you 25-30 minutes when you are in good shape and can complete the whole thing. If you can only get 15 or 20 minutes ithe first few times, there is nothing wrong with that. It’s not nearly as easy as it looks. This is a challenging program.

Build up, but listen to your body and be smart. You may want to slow your walking intervals to 3.5 or 3 mph when you are first starting – or even slower – to aid in your recovery.

You can add incline to the runs, walks or both to make this more challenging. Make sure that you are very careful when adjusting speeds and inclines and that you are holding on to hand rails and taking all safety precautions. Take it easy the first few times and get used to the process and how your treadmill works before ramping it up.