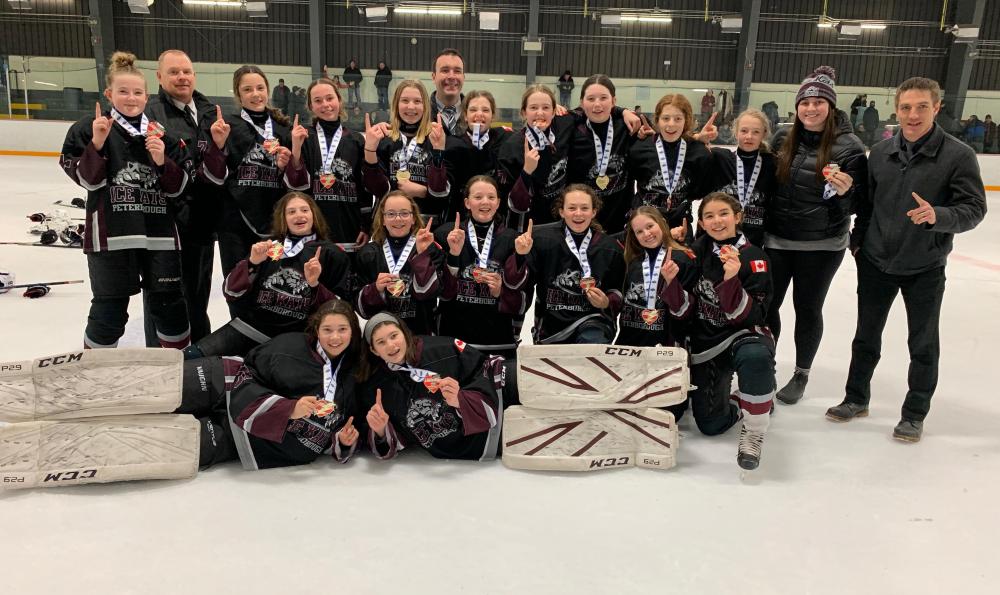 We continue with our series of spotlight articles on teams from around North America that finished No. 1 in our final 2019-20 rankings. This week we take a look at the top-ranked Tier 1 girls teams in Canada:

When you are the only female team to beat the No.1-ranked club in the United States and hold down the top spot in all of Canada according to MYHockeyRankings.com from Nov. 14 until the end of the season, there’s a pretty good chance you’re going be a marked team.

And while they certainly wore a bullseye for much of the 2019-20 campaign, the Peterborough IceKats managed to make it look easy in compiling an eye-popping 48-7-4 overall record while capturing the LLFHL East regular-season crown and amassing the most standings points in the entire league.

It wasn’t quite as easy has his remarkable team made it look, though, according to IceKats coach Chris Moher.

“This was the first season in these girls’ hockey careers that they were considered the team to beat provincially,” Moher said. “As a group, they had to develop an appreciation and expectation for what that meant. Game after game we would be seeing every team’s best effort as they wanted to knock us off. Our team’s preparation and confidence grew as the season unfolded, and it seemed like once a month we stumbled with a loss that allowed us to reflect on what our team failed to do to allow that to happen.”

Peteborough’s “once a month” losses became even less frequent as the season progressed. The IceKats finished the year with only two setbacks in their final 43 contests, and those came against the Chicago Mission (Jan. 5) and the Little Caesar’s (Feb. 8.), the Nos. 1 and 5 teams in the United Sates, respectively.

They did manage to beat the Mission as well as the No. 12 St. Louis Lady Blues and No. 13 Honeybaked during that stretch to go along with victories over the 16th-ranked team in the U.S. and the Nos. 2, 3, 4, 7, 10, 11, 15, 19 and 20 teams in Canada. Of course there were some ties mixed in as well, including one against the Mission and deadlocks against Canada’s No. 7 Markham-Stoufffville Stars and No. 8 Ottawa Ice.

Peterborough allowed about a goal per game in outscoring its opponents, 230-61, for the year while recording 24 shutouts, including two separate four-game shutout streaks. The IceKats also recorded a pair of three-game shutout streaks and did not allow their final three opponents to score a goal.

“Despite being so successful, we were a team in every sense of the word,” Moher said. “We had an amazing leadership group, and every player bought into the selfless team mindset. The bench erupted no matter who scored a big goal, and a big save or a fearless blocked shot at the end of a game got as much peer praise on the bench as a one-timer goal.”

The IceKats won two of the four in-season tournaments in which they competed and placed second in the other two, but the team’s results were even more impressive in the LLFHL.

Peterborough compiled a 19-1-2 league record while allowing less than a goal per game with a goal differential of 90-15. After receiving a first-round bye in the LLFHL Playoffs, they swept No. 21 Durham West in a pair of second-round games without allowing a goal to advance to Championship Weekend March 27-29.

“We were a very good team that never allowed individual goals to trump team success,” Moher said. “We actually rarely spoke about individual offensive success this year. The players to this date have no idea how many goals or points they got this year as we never made that the objective. We always made more controllable variables – preparation, effort and execution – the team and individual goals, with two points being the likely outcome if we did that.”

Unfortunately, COVID-19 would allow the team to go no farther, and the season came to a halt in the middle of what it hoped would be a deep postseason run.

“The team was comprised of a special group of 17 ladies who decided from Day 1 at summer hockey camp in August that our two goals would be winning both the LLFHL and OWHA {provincial} championships at the end of the season. Although we were not able to fulfill our destination goals because of COVID-19, the players and coaches have been able to take solace in the incredible journey we went on this year and the memories that we formed.”

Congratulations to the IceKats and the other three teams recognized in the article below on their tremendous seasons.

Here is the team’s full roster:

If you think the Storm’s 51-9-6 overall record is impressive, they also posted a 20-1-1 league mark to capture the LLFHL Central regular-season championship by four points over the second-ranked Central York Panthers (53-8-4) and the No. 8 Barrie Sharks (31-9-6).

The teams had played two games of their LLFHL Central finals playoff series, with Central York winning the opener 3-0 and the second contest ending in a 3-all tie, when the COVID-19 shutdown took effect. Although ranked as the top two Bantam teams in Ontario, only one of them would have advanced to LLFHL Championship Weekend March 27-29 in Toronto.

The other division finalists included the No. 5 Durham West Lightning, No. 7 Whitby Wolves, No. 4 Stoney Creek Sabres, No. 3 London Devilettes, No. 11 Burlington Barracudas and No. 13 Waterloo Ravens. North York had posted a combined 8-4-3 record against those teams this season. That means six of their nine total losses came against league foes ranked among the top 12 in all of Canada.

Ironically, including the two playoff games vs. Central York, the Storm ended their season winless in their last three contests (0-2-1). Prior to that they had been unbeaten in their previous 14 outings (12-0-2), dating back to a 3-2 shootout loss vs. Durham West January 5.

In addition to losses against Canada’s Nos. 2, 3, 4, 5, 8 and 12 clubs, North York also fell to the No. 20 team and the sixth-ranked U.S. team. Similar to the short late-season skid, North York opened its season by losing two of its first three contests and was 10-4-1 at one point before winning 13 of its next 14 and closing the season by going 41-5-5 over the final 51 contests.

For the year, the Storm outscored its foes, 263-63 overall, and 85-13 in league play. That works out to 0.95 goals allowed per game for the full season and 0.59 in the LLFHL, with 26 shutouts making up a large portion of that impressive defensive showing.

It points to the character and chemistry of a team when a group of players and a coach who won 38 out of 44 games to earn the top ranking in all of Canada point to two losses as possibly the best games the team played all season.

On top of that, they also credit the lessons learned in those setbacks with helping the team carve it's path along the road to a league regular-season title and that No. 1 national ranking.

“We were still a fairly young team with only five players graduating,” Reginal Rebels coach Mike Merk said. “For me as a coach – and as a team – we would probably say those games we lost to St. Albert and Edge school would be up there with the two best we played. Our motivation was to never feel that feeling again this season. We learned from each loss, adapted and changed in hopes of not feeling that disappointment again. With every loss, our next victory was usually done with some authority.”

Regina’s loss to sixth-ranked and three-time national-champion St. Albert, a 1-0 decision, came in the first game of the season. The Rebels followed that up with victories in 11 of their next 12 outings, the only setback in that stretch being a 4-3 overtime thriller against the No. 8 Swift Current Wildcats.

The loss to the Edge School, Canada’s top-ranked prep team, was another 3-2 overtime heartbreaker, but it spurred an 11-game winning streak as the Rebels would close out their season on a 16-2 run.

The game against Edge came in the finals of the Mandi Swartz tournament, while the St. Albert setback occurred during the Calgary Firestarter event. Regina captured the championship in its other tournament, the Two Nations Tournament in Detroit, by beating the Philadelphia Jr. Flyers, the sixth-ranked U.S. team, as well as Canada’s ninth-, 10th- and 12th-ranked clubs.

“That was the experience of a lifetime for some of our team,” Merk said. “From players flying for the first time, to seeing the Toronto Raptors in the airport and some players attending their first NHL game, to come out as the champions of the tournament for our age group was a memorable part of what was an overall great season for our organization.”

A great season that did not come without its disappointment, however, as the Rebels and the rest of North America couldn’t beat the final opponent, coronavirus.

“COVID-19 really hit hard with our team,” Merk said. “The one word that comes to mind is feeling like we were robbed of our chance. The Rebels have not had a season like this since 2013, and we have spent the last four to five years building to get back in that hunt. This year was setting up to be our turn to make a run. As a team, we understand that bigger things are at play, and safety comes over hockey. Although we understand, it is still hard for the team to end the way we did. Our last game of the year was against the second-place team, and we beat them 6-2. We were ready for the playoffs.”

That 6-2 win vs. the No. 8 Swift Current Wildcats was the fourth in six meetings with their second-place foes. Regina had beaten Swift Current in three of the teams’ previous four meetings, outscoring the Wildcats, 17-3, in the process. The Rebels certainly looked primed for not only a deep run in the SFMAAAHL Playoffs, but also potentially in the provincial and national tournaments.

Regina finished the SFMAAAHL regular season 15 points in front of Swift Current with a 26-2-1-1 record and 81 points. The Rebels posted a goal-differential of 117 by outscoring its foes 158-41 in league play – and 203-59 overall for the season.

“When it comes to top players, I really can’t single out any one or two,” Merk said. “This was a full team effort, and some players contributed to the team offensively while for others their defense was the key to our success. For us as a team, the quote of the year was, ‘When you walk in this room you no longer exist as an individual; we are a team.’ The dressing room was the best in my four years as coach of the team, and the players all got along and played for one another.”

Things didn’t look so great for the Titans in late August after they dropped the first two games of their season against the Minnesota Jr. Whitecaps and the Boston Jr. Eagles, who finished the year as the third-ranked U.S. 19U team.

In fact, Limoilou was just 3-3 after six contests.

Everything looked just fine by the end of the season, though, as the Titans took a 25-game unbeaten streak (21-0-4) into their final regular-season game against No. 8 John Abbott College. Unfortunately, they dropped that contest, 3-2, but rebounded to knock off Dawson, 9-0, in the CEGEP quarterfinals March 7.

Winners of the CEGEP regular-season title with a 23-3-0 league mark, Limoilou looked to be well on its way toward capturing the playoff championship as well when COVID-19 shut down the season. The Titans finished four points ahead of third-ranked Champlain College-Lennoxville in the CEGEP standings and seven points in front of John Abbott.

Limoilou’s end-of-season run concluded with a 26-1-4 mark in its final 31 contests, including nine shutouts, and the Titans went 31-2-4 after opening the season 3-3.