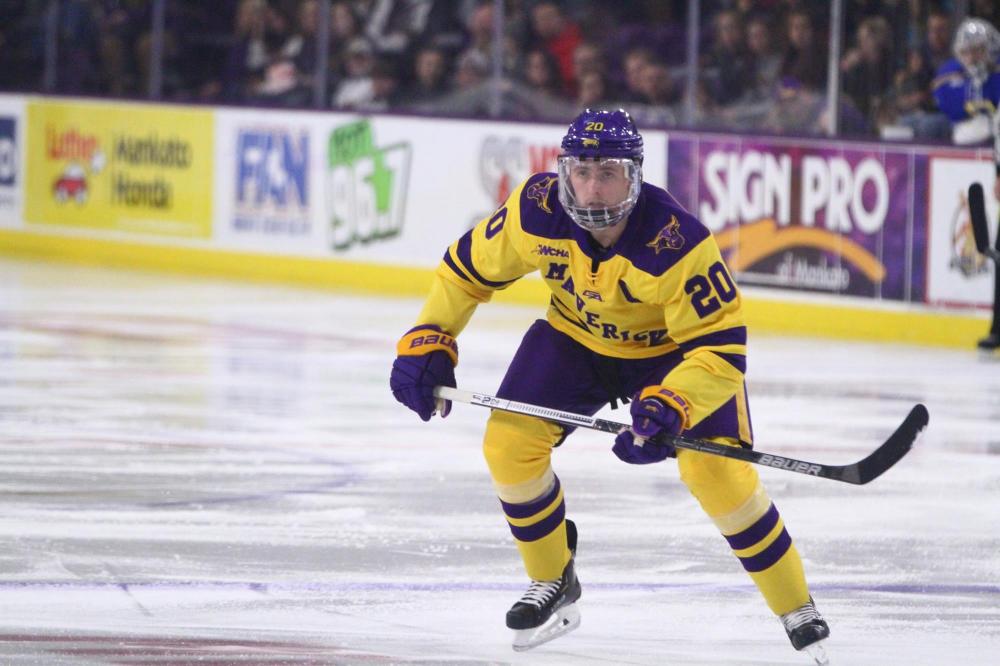 In 2015, the Minnesota State men’s hockey team became the first No. 1 seed to lose in the opening round of an NCAA Division I Championship tournament. The Mavericks repeated the dubious feat in 2019, and heading into the 2020 tournament their record in opening-round games was 0-6.

Sometimes all it takes is one win to change everything.

Playing free, fast and easy after rallying from an early 2-0 deficit to defeat Arizona State in the Colorado Regional semifinals, the top-seeded Mavericks looked like a team that had the weight of the world removed from its shoulders in Saturday’s regional final at the Budweiser Events Center in Loveland. They sprinted to a 4-0 lead in the opening 40 minutes and never looked back in defeating second-seeded Denver, 5-2.

Since falling behind by two goals to ASU in the opening 4:47, Minnesota State has outscored its two opponents by a margin of 10-2 over the next 115:13.

The high-powered Mavericks entered the postseason with four players having eclipsed the 30-point mark, and each one contributed to the onslaught Saturday. Fired-up Hobey Baker-finalist Mark Michaelis, who found out earlier in the day that he had not won the award, made the biggest statement with two-first period goals to go along with two assists later in the game.

“We showed a lot of maturity as a team in that game against Arizona State,” Michaelis said of a squad that boasts 15 juniors and seniors on its roster. “It could have been panic time for us down 2-0, but it never felt that way on the bench. We were determined to not repeat history, and we came out tonight like it was our time to take this program to a new level. I’m not sure anything would have stood in our way tonight.”

A seemingly relieved Mavericks head coach Mike Hastings, who lived through the two 4 vs. 1 upsets, echoed those sentiments.

“It’s hard as a coach sometimes, because you are more dialed into the history than the kids and you know that they feed off of you,” Hastings said. “You always want to maintain an even keel behind the bench win or lose. I can honestly say that during the Arizona State game I fed off them. There was no negativity on the bench that night, and I think the way they finished that one off carried over into tonight. Now we need to keep it rolling for the Frozen Four.”

Then he paused and took a deep breath, teetering between a smile and tears.

“I’m not going to lie, though. It does feel pretty good to be able to finally say that. I’m so happy for these guys. What a night for Minnesota State.”

Michaelis and Mavericks goalie Dryden McKay, also a finalist, found out earlier in the day that Minnesota Duluth’s Scott Perunovich had been selected to receive the Hobey Baker Award. Michaelis didn’t waste any time making one final argument on his own behalf.

The WCHA Offensive Player of the Year missed on a breakaway in his first shift, hit the post on his second shift and finally broke through against Denver goalie Magnus Chrona, poking home the rebound off a Connor Mackey point blast on Minnesota State’s 11th shot of the period.

Despite only leading 1-0, the Mavericks had dominated the opening period to that point, rolling to an 11-3 shots advantage.

“Magnus was really good early,” Pioneers’ head coach David Carle. “I thought that if he could keep that up and we could weather the storm, maybe go into the second period down just one, that their legs might leave them a little bit and we could grind our way back into it.”

Unfortunately for Denver, things didn’t work out that way.

Michaelis took a rest and didn’t miss a beat on his next shift, which happened to be a power play, one-timing a feed from fellow senior Parker Tuomie past Chrona for the 2-0 advantage with 4:46 left in the period.

“I always feel like two things need to happen for teams to go far in a single-elimination tournament,” Hastings said. “Your seniors and your stars need to set the tone and carry the load.”

That certainly was the case Saturday as yet another senior, Charlie Gerard, scored from the slot off Tuomie’s feed for a 3-0 lead 2:57 into the second frame. Tuomie would finish the evening with three points, connecting for Minnesota State’s fifth goal with fewer than five minutes to play in the game. Michaelis would pick up two secondary helpers to conclude the night with four points, while Gerard notched a goal and an assist.

The upperclassmen let the younger guys join in the fun, too, as freshman Nathan Smith converted a Lucas Sowder feed with 3:10 left in the second period for a 4-0 advantage

McKay hadn’t really been challenged to that point, with his teammates having controlled play throughout and Minnesota State holding a 28-12 shots advantage heading into the third period.

“I’m not sure we could have played much better as a team,” McKay said. “The guys really made it easy on me. I wish the third period had gone a little better, but when you’re playing with the type of energy we were and executing in all three zones that well, sometimes it’s hard to keep that up for 60 minutes. We will have to do better with that at the Frozen Four.”

Denver showed signs of life in the final 20 minutes, getting goals from Cole Guttman and Tyler Ward, but the Mavericks pulled it together and put the exclamation point on the win with Tuomie’s late marker.

“First, I want to congratulate Scotty Perunovich on winning the Hobey Baker Award,” Michaelis said in a business-like postgame press conference. “He’s a great player and very deserving. It would have been nice to win that, but my focus is right here with these guys in this room. We’re not done yet.”

Minnesota State improves to 33-5-2 with the win and will take on the winner of the New York Regional final matchup featuring top-seeded Cornell and No. 3-seed Ohio State in one national semifinal. The Frozen Four is scheduled to take place April 17-21 at Little Caesar’s Arena in Detroit.