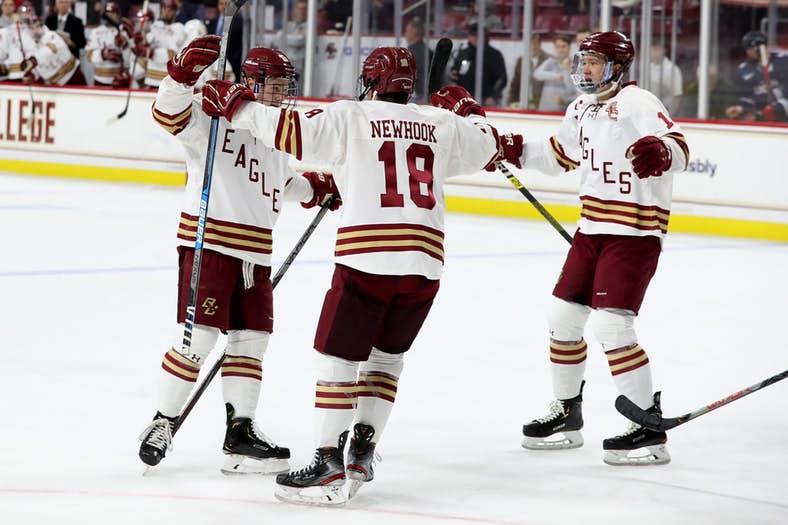 You couldn’t ask for a more even matchup on paper in the opening round of the 2020 NCAA Division I Men’s Hockey Championship than second-seeded Boston College and third-seeded Clarkson.

Two of the top eight defensive teams in the nation. Two of the nation’s top-10 statistical goaltenders. The 14th- and 15th-best power plays. The fourth- and fifth-best winning percentages.

But something had to give when the two teams met in the second Massachusetts Regional semifinal Thursday.

The one area where BC held a substantial edge – overall offensive firepower – ultimately prevailed against the nation’s third-best defensive group as the Eagles’ stars played like stars to lead BC to a 4-3 victory against the Golden Knights in front of a raucous crowd that turned Worcester’s DCU Center into the Conte Forum West.

Top-12 NCAA scorers Alex Newhook and David Cotton stepped up and each scored once for the Eagles, while freshman Mike Hardman remained red hot and buried a marker of his own.

But the game-winner came from a more unlikely source as senior defenseman Ben Finkelstein broke a 3-all tie on the power play with 7:48 left in the game and Jordan Schneider off for a controversial holding call.

Finkelstein’s seeing-eye tally sent the crowd into a frenzy, and the Eagles held off a predictable late Clarkson surge to skate away with the victory and advance to the regional final. BC will face Minnesota Duluth, the region’s top seed and the two-time defending national champion, April 11 in Worcester for the right to play in the Frozen Four.

“You look at the two teams’ numbers coming into the game and watch the teams on film, and as a coach you really just don’t get a great feel for how the game is going to go,” BC Hall of Fame coach Jerry York said. “We are probably older and more experienced on paper, but many of our key guys are freshmen, while they have a grad student and one of the best guys in the country in goal and a group that was third in the nation in goals allowed. It really came down to whether our young guys could come through on a big stage against that type of team. I feel fortunate to walk out of here with a victory.”

Ironically, it was one of the Golden Knights’ veterans – senior defenseman Schneider – who watched helplessly from the penalty box as Finkelstein’s seeing-eye power-play point shot weaved its way through a maze of bodies and past screened netminder Frank Marotte for the third-period game-winner. It was Finkelstein’s sixth goal and 22nd point of the season and his fourth power-play marker.

“We stressed all week in practice that the only way to beat a goalie like theirs was to take away his eyes,” Finkelstein said. “And that’s what we did. We got bodies to the front of the net and pucks to the net. If you do that enough, even a guy like me is going to get lucky and sneak one through at some point.”

It was a bitter ending to an incredible career for Marotte, who established the career victories record at Robert Morris before transferring to Clarkson for one final season as a graduate student. He made the most of that one season, playing all but 44 minutes and ranking fourth in the nation in both goals-against average (1.78) and save percentage (.931). He also notched four shutouts to earn the ECAC Ken Dryden Award as the conference’s top goaltender and helped Clarkson to its best regular-season record in 23 years.

“I didn’t stop the one I needed to,” was his only reaction to the deciding tally. “No excuses.”

Marotte finished the game with 26 saves.

At the other end of the rink, rookie netiminder Spencer Knight, sporting a gaudy resume of his own as a second-team All-Hockey East Selection and a semifinalist for the Richter Award, knew he had to match his veteran opponent save for save to give his team a chance. Knight actually did one better than that, turning aside 27 Clarkson offerings.

“I knew if I could just keep us in the game our big guns would step up and come through for us,” Knight said.

The game was a back-and-forth affair all evening, with the fired-up Eagles using the energy of their “road-team advantage” to jump to a 1-0 lead just 2:25 into the contest as another rookie, Alex Newhook, netted his 20th goal of the year. That tally pushed his points streak to 13 games, and his assist on the game-winner would improve his totals to 11 goals and 14 assists during that run.

Thanks mostly to Marotte, the Golden Knights weathered the storm over the next 15 minutes, and as the crowd settled in, so did Clarkson. Junior Zach Tsekos buried his ninth of the year off a rebound for his eighth point in the last eight outings with 2:04 remaining in the period and then BC senior defenseman Luke McInnis was called for a cross check during a scramble in front of Knight just 40 seconds later.

Just like that, the momentum had swung in the Golden Knights’ favor. BC and its fans appeared to need to use the intermission break to refill their tanks, so to speak, but Clarkson came out flying and took the lead just 17 seconds into the second period on a power-play rocket off the stick of gigantic All-ECAC defenseman Connor McCarthy.

The opening faceoff dribbled back to McCarthy, who snatched it up and made a beeline for the offensive zone before firing a hard-around dump that was picked up by Haralds Egle in the opposite corner. Egle traded passes with Devin Brosseau down low before feathering a soft pass to the center-point area where McCarthy one-timed it past the screened Knight.

With a one-goal lead early in the second period, a Clarkson team that allowed just 1.85 goals per game on the year was following head coach Casey Jones’ game plan to perfection. The Golden Knights locked down for most of the second frame, holding BC to mostly harmless shots from tough angles and the outside to make life easy for Marotte.

But ultimately it would be one of those seemingly harmless offerings that allowed the Eagles to tie things up with 3:56 remaining in the period. A shot that fluttered in from the right-wing half wall handcuffed Marotte, glancing off his shoulder and arm before settling on the stick of yet another freshman, Mike Hardman, who slid home the rebound for his 13th goal of the year and third in three games.

That reignited the Eagles’ crowd, which energized the team, and after suffocating Clarkson in its own end for the ensuing 75 seconds, senior David Cotton extended his goal streak to four and point streak to five games by going bar-down from the high slot.

Literally saved by the bell with BC still buzzing as the buzzer sounded, the punch-drunk Golden Knights limped into the locker room for a break that couldn’t have come at a better time. Jones played a hunch and sent a line that included sophomore Adam Tisdale out to start the third period.

The hunch paid off as Tisdale, who had picked up the slack with goals in the last two games when some of Clarkson’s top players had been shut down, held his ground long enough to tuck one in during a goal-mouth scramble before getting buried by a pair of BC players. With 19:08 remaining in regulation, the game was again deadlocked at 3.

“We were exhausted and extremely frustrated at the end of the second period,” Jones said. “Adam had stepped up for us late in the season, so I wanted his line out there. I figured they were a little fresher than our other guys and it might catch BC off guard. It really paid off for us. At that point I thought it was anyone’s game.”

The pace slowed a bit from that point on as neither team wanted to make a mistake. It became mostly a game of conservative defensive-zone clears in one end and chip and chase in the other. Until the call.

Schneider was whistled for a hold away from the puck with 9:15 remaining. He and Logan Hutsko were battling in the corner. Hutsko won the puck, slid a pass to the point and tried to break out of the corner toward the net for a give-and-go. He and Schneider never really got untangled and Hutsko went down as he tried to break free.

Schneider was sent off, and Finkelstein took center stage to win it.

“As a defenseman I know how he feels,” Finkelstein said. “Sometimes you battle so hard that something happens that maybe the ref sees out of the corner of his eye and thinks it’s worse than it really is. It’s part of the game, and I feel for him. But for us, once we had that opportunity, it was our job to capitalize.”

That they did, and now it’s on to the regional finals.

Updated game results and the upcoming schedule can be found here.