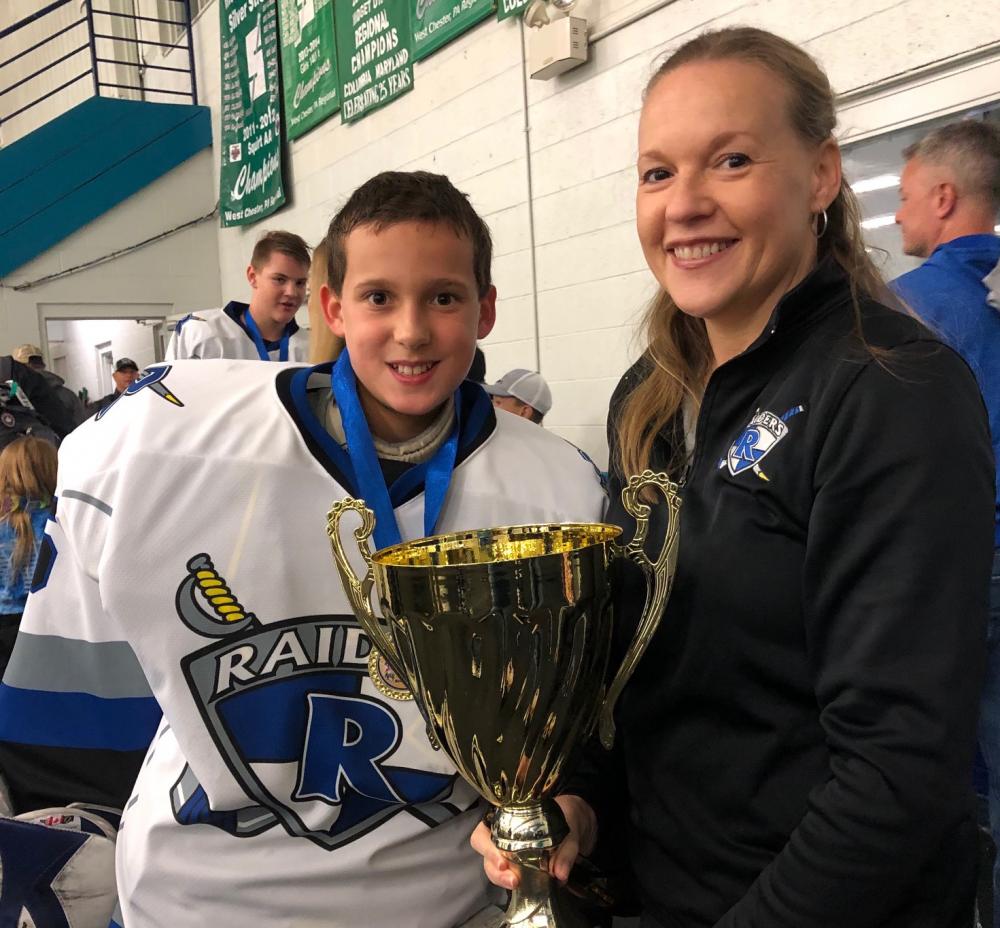 Cancer is a disease that one way or another has touched all of our lives – and usually not in a good way.

But as awful as the disease can be, the motivation it has provided for so many to do so much to help others in their fight to beat cancer not only has generated enormous sums of money for continued research and treatment, but also has provided inspiration to those engaged in the daily fight to survive.

If you’re looking for inspiration, look no farther than Harrison Smith.

Harrison is a goalie in Virginia playing for the Reston Raiders 2007 AA team. As a goaltender in the state where the October Saves program originated, he had participated in the annual cancer fundraiser for two years and done about as well as you might expect for someone his age; he estimated raising a couple thousand dollars or perhaps a little more.

Something changed last March, however, as Harrison’s mom Krista, who is 48, was diagnosed with breast cancer. She had surgery July 1, followed by radiation treatments throughout September and into October.

Krista was diagnosed stage I, with no lymph-node involvement. She had the most common and treatable form of breast cancer, but kids don’t necessarily hear or understand that part. All they know is that cancer kills, so Krista and her husband Simon went out of their way to keep it light when sharing the news with Harrison and his older sister Ella.

“We were pretty lighthearted when we told the kids,” she said. “I’m pretty sure when I told them I said, ‘Buddy, wait until you see how much money we raise this year for October Saves.’”

If Harrison was old enough, he might have responded, “Hold my beer.”

Inspired by his mon’s diagnosis, the pee wee netminder set out on a mission to raise as much money as he could in Krista’s honor. Working together with her to reach out to friends, family, teammates, co-workers and anyone else to share their story and ask for donations, Harrison raised far more money than even he thought possible through the first few weeks of October.

One of his coaches, Tim Waterman, even promised to donate $100 for every shutout Harrison recorded along with a per-save pledge. Harrison and his teammates played amazing hockey throughout the month, posting a 6-1-1 October record and rising almost into the top 10 in the national rankings. But there were no shutouts as the final deadline to collect donations approached.

So Waterman upped the ante and doubled down, promising $200 for a shutout that final weekend. Harrison and his teammates responded with a pair of shutouts, which propelled him over the $10,000 mark. He ended up raising $10,500 and ranking third in North America out of more than 1,200 participating goalies in money raised.

“Those two shutouts were a big reason I was able to raise so much money,” Harrison said. “It felt surreal and very special to be able to do that and be able to raise that extra money at the end. I definitely wanted to do as much as I possibly could. If possible I wanted to get a shutout every game, but I know that’s hard to do. I just tried to keep myself focused and put the pedal to the metal."

So what was the secret to his success?

“My teammates and their parents really helped out a lot,” Harrison said. “And I said please. I’m very thankful for everyone who donated.”

Krista helped Harrison craft and send emails to anyone they thought might be willing to donate, and she said that her co-workers at Deloitte really came through.

“We thoroughly fleeced my colleagues,” she joked. “But they really stepped up and donated like it was nobody’s business. They were very generous. When we started, we thought he might be able to raise around $5,000. It was really heartwarming to see him put so much thought and energy into this. Pretty much every morning he would come downstairs and ask if he had gotten any pledges overnight. Then he would come home from school and ask where he stood. I was really proud how excited he was and how into it he got.”

Started by cancer-survivor and Virginia-resident Lara Hopewell in 2014 with 28 participating goalies, October Saves runs throughout the month of October, which is Breast Cancer Awareness Month. Goalies can sign up starting on Sept. 1 each year and can solicit pledges for each save they make during the month as well as flat donations. The OctoberSaves.org website allows each goalie to create a personalized webpage where saves can be entered following games and donations can be submitted.

The website also provides resources to help the goalies with their fundraising such as sample donation-request letters, sample letters to get their club to participate and promotional items that can be used to decorate a goalie’s home rink. Participating goalies compete for prizes such as a custom helmet, leg pads and a goalie stick; a week at NHL goaltending-guru Mitch Korn’s summer camp; and other awards for reaching certain donation plateaus.

“It’s amazing what you can do when you are raising money for your own mom,” said Hopewell, herself a mother of two young goalies. “We are very thankful and proud of our netminders like Harrison and the communities that support them.”

Added Krista: “I was very fortunate in that I had a great support network around me and great insurance. Not everyone has that. I didn’t have a lot the concerns or face the obstacles that so many others with cancer might experience and that the money raised by programs such as October Saves goes towards helping. So I’m happy that we had a way to give back and help those who find themselves in a similar situation but are not as fortunate. It is a great thing for hockey families to rally around.”

For Harrison, October Saves was another highlight in a career that started when he was 5 years old and “wanted to be just like Marty Brodeur.” He started with skating lessons at the Reston ice rink, attended a summer camp in nearby Ashburn and then participated on house teams and moved up to the mite level. Harrison even scored this goal between periods of an NHL game as part of the Washington Capitals Mites on Ice program. He was the backup goalie for his squirt team and eventually became the starter.

“Hockey is his favorite sport,” Krista said. “He loves to shoot rubber pucks in the family room at a target and play Wii hockey.”

And, of course, he loves his mom. So what better way to show it then by raising money to help others who have to face what Krista just went through but possibly under more daunting circumstances. Krista had her last radiation treatment Oct. 7. She said that she feels good and that her physical strength mostly has returned.

Like any good goalie, Harrison refuses to take all the credit.

“It was a great team effort,” he said. “Even when I don’t get a lot of shots during a game, I still cheer the team on to do the best that they can do, and hopefully they do well. I just hope this is something that helps. I wanted to give back and to keep fighting for this cause, because every dollar counts.”