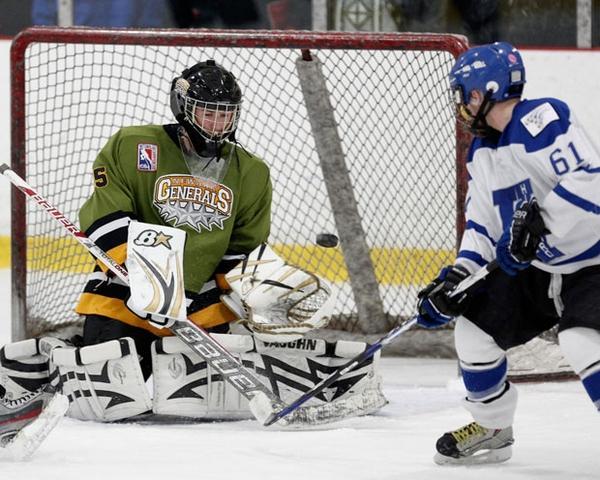 Ohio High School Hockey is a Happy Tale of 2 Opportunities

In a state known more for football than hockey, a tale of two organizational opportunities to play high school hockey exists in Ohio.

Teams participating in the Ohio High School Athletic Association (OHSAA), the governing body of most high school sports in Ohio with the mission statement, “To serve our member schools and enrich interscholastic opportunities for students,” are a part of the National Federation of High Schools and thus abide by their playing rules.

An additional group of high school teams is organized under the banner of USA Hockey. With a few exceptions, these are “club” teams consisting of players from numerous different high schools which, in most cases, do not offer ice hockey as a varsity sport. This type of team is usually referred to as a co-op.

These USA Hockey players are united and committed in their effort to continue to play the sport they love at the high school level despite the exclusion of the sport at their home school in many cases.

Both sets of teams can be found on myhockeyrankings.com, and the end-of-season rankings play a critical role in determining playoff eligibility and seeding for the USA Hockey teams.

Ohio is in the MidAM District of USA Hockey and MidAM Vice President Tim O’Shaughnessy shared a bit of the history and the evolution of competitive state playoffs for the coveted Buckeye Cup among USA Hockey High School teams in the state.

According to O’Shaughnessy, the three leagues of high school teams created a state championship in the early 2000s, determined the tournament would rotate annually between Cincinnati, Cleveland and Columbus and decided it would be called the “Buckeye Cup.”

Originally the state tournament qualifiers included 12 teams, with four representing each of the three leagues.

“I had some experience with MyHockey Rankings, and I suggested that {the tournament committee} take three guaranteed teams from each league and the remaining three qualifiers would be determined from the best three uninvited teams based on MyHockey Rankings,” explained O’Shaughnessy. “That was adopted unanimously. After a few years, in the interest of continuous improvement, we guaranteed two slots to each league and put the six highest {ranked} uninvited teams in the tournament.”

A perfectionist at heart, O’Shaughnessy continued to look for ways to improve the process.

“Two or three years ago, I suggested that each league get one guaranteed spot – regular-season winner or season-ending-tournament winner – and the nine best teams (according to MyHockey Rankings) that are not league winners get invited,” he said.  “It’s where I think it ought to be now. It’s worked out very well. The Buckeye Cup has become harder to get into and is a great, very competitive tournament. There is no question in my mind that the teams in Cleveland are scrapping to get into the Buckeye Cup. Sending their team is a feather in their cap,”

Tournament results seem to support the success of the evolving tournament format. O’Shaugnessy said that over a five-year span starting about 10 years ago the bottom three teams went 0-9 in the tournament. “Last year, they were 3-6. We {now} have the best 12 teams in the state playing.”

Bill Switaj, manager of the Kent State University Ice Arena and MidAM District Coach-in-Chief, is involved in both OHSAA and USA Hockey High School Hockey. Switaj’s ice arena on the Kent State University campus is home to a mix of seven OHSAA and USA Hockey high school programs. The arena is also a district site for the OHSAA state hockey playoffs.

He appreciates the opportunity the USA Hockey High School league provides players who, otherwise, might not get to experience playing the sport at the high school level.

“The lifeline of any ice arena is a good high school program,” Switaj said. “Any parent that has a child in grade school has a reasonable expectation that their son or daughter play high school sports. If {a schooll) doesn’t have a high school hockey team, you are probably discouraging them from even trying the sport at a young age.

“Federation teams are great, but if {you don’t attend a school that has a hockey program}, you can’t play for those teams. Having a high school program that is USA Hockey-related, where they come from a lot of schools, gives them that opportunity. The fact that you have club programs is very important. To play high school hockey is a great goal.”

With players on rosters of USA Hockey co-op-style high school teams attending a variety of schools, attending practices, games and other team-related activities often requires a high level of commitment as the team’s “home” rink may not be in a convenient location.

The same may be true for the coaches of these teams, who are USA Hockey volunteer coaches.

“Some of those well-organized club programs have done a good job over the course of time,” Switaj said.

And he may have summed up the prevailing local opinion best when assessing the OHSAA/Federation and USA Hockey high school opportunities: “We want them both to do well.”

In other words, a tale of two opportunities with a happy ending.