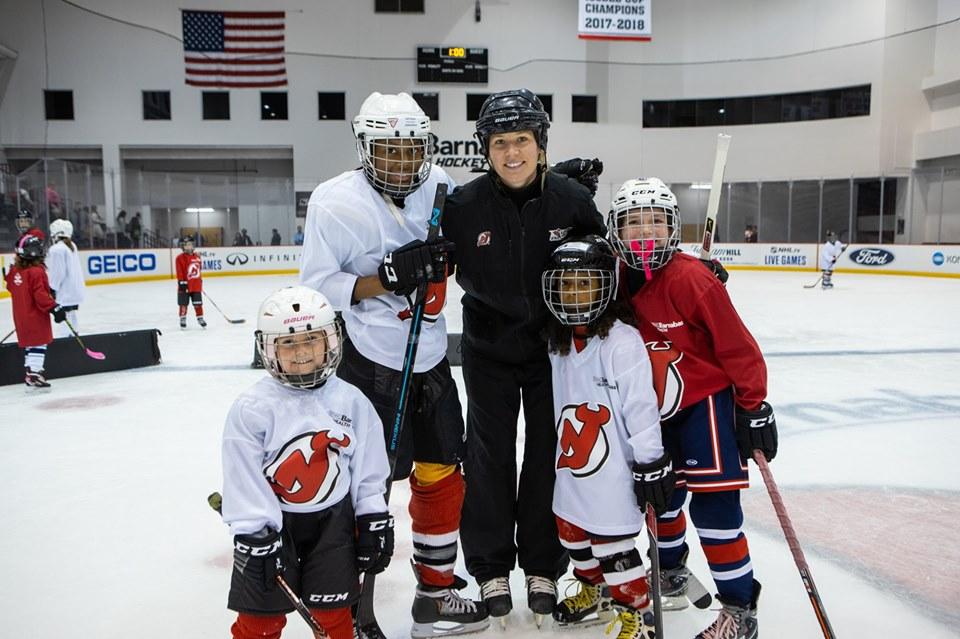 And based on the excitement and interest surrounding last weekend’s ninth annual International Ice Hockey Federation World Girls’ Hockey Weekend – as well as the commitment today’s top women’s hockey players have made to provide more opportunities to young female players and protect the sport – that growth isn’t likely to slow down anytime soon.

In the United States alone, more than 83,000 girls and women registered as hockey players for the 2018-19 season, representing 34-percent growth over a 10-year period. Last weekend there were 526 events with tens of thousands of participants in 42 nations around the world celebrating girls’ hockey as part of the IIHF’s annual event.

There were 130 events in the U.S., with Michigan’s 23 leading all participating states, and the NHL also got on board with the Bruins, Hurricanes, Blackhawks, Blue Jackets, Stars, Devils, Rangers, Penguins and Capitals hosting programs.

Several professional and Olympic-level players have begun working with NHL teams as youth hockey ambassadors in their respective markets, including Maryland-native Haley Skarupa, who serves in that role for the Washington Capitals. Skarupa was part of the team’s Girls’ Hockey Weekend festivities, running a clinic and hosting a group of young players who participated in a between-periods game as part of the Caps’ Mites on Ice Program when the Capitals played the Islanders Oct. 5.

“We went through a lot to be able to earn the gold medal, and it was a dream for us,” Skarupa said in a recent USA Hockey piece. “Now, the most rewarding thing and special part of that whole experience is to share it with the next generation, let them hold our medal, meet us and coach them in a clinic so they can have that dream, too.”

Providing young girls with the opportunity to dream about a future playing hockey into college, possibly in the Olympics and beyond to the professional level is a driving force behind the recent creation of the Professional Women’s Hockey Players Association (PWHPA). Similar to recent efforts by members of the U.S. Women’s National Soccer team, North America’s elite women’s hockey players are fighting for equal treatment and opportunity at the professional level.

Instead of competing in under-funded and under-marketed professional leagues for paltry sums that aren’t even close to minimum wage and being expected to find and fund their own training to be able to play at the professional level, nearly 200 of the top players in North America decided to sit out the 2019-20 season and form their own players’ union.

The PWHPA was created this year not only to protect and provide for the current professional-level players, but also to ensure continued legitimate opportunities for future generations of players.

The organization’s mission statement speaks to the goal of having a sustainable, viable professional women’s league to showcase the sport at the highest-possible level; providing a unified voice for players advocating for such a league; coordinating training needs and programming opportunities for players capable of playing at that level and collaborating with like-minded hockey organizations to make hockey “more inclusive for women today and for the girls of the next generation.”

“While we have accomplished so much, there is no greater accomplishment than what we have the potential to do right here and right now – not just for this generation of players, but for generations to come,” reads the PWHPA website. “With that purpose we are coming together, not as individual players, but as one collective voice to help navigate the future and protect the players’ needs.”

There is no doubting the passion and love that North America’s top female hockey players have for the sport. It’s evident in how they play the game, the work they do to promote the sport in their hometowns and at the grassroots level as well as the numerous public and media appearances they make to promote hockey

While these players are more than willing to do what needs to be done to advance their cause, not playing any hockey would have been challenging for them and disappointing to the thousands or young girls who look up to them. ‘

So to fill the void, the PWHPA created the Dream Gap Tour in which professional players and Olympians come together at designated sites on weekends. They form four teams that play against each other and participate in grassroots clinics and other activities to promote their sport and their cause while giving young female hockey players an opportunity to interact with them on and off the ice.

Three weekends were scheduled, each with its own sponsor, in areas where hockey is popular. Two of them have taken place already – in Toronto and Hudson, N.H. – and by all accounts they have been rousing successes. Four games are played at each venue, clinics and other interactive activities are held and tickets are reasonably priced at $25 per day or $40 per weekend with group rates available.

The next tour event is scheduled for Chicago Oct. 18-20. Ticket and other information can be found here. More than 35 former Olympians, including household names such as Hilary Knight, the Lamoreaux sisters, Amanda Kessel, Sarah Nurse and Kendall Coyne-Schofield, are scheduled to participate along with Hall of Famers Cammi Granato, Jayna Hefford and Angela Ruggiero.

“This is going to be an extraordinary weekend, with the best talent in women’s professional hockey in North America coming together in Chicago for the first time ever,” said Coyne-Schofield, a six-time world-champion and Olympic gold medalist. “The lasting impact that will have on the next generation of players is indescribable.”

It has been an incredible year for girls and women’s hockey, including Coyne-Schofield’s impressive showing at the NHL All-Star Skills Challenge, the continued rise in girls’ hockey participation numbers, the creation of the PWHPA and the recent hiring of Granato as a professional scout by the future NHL franchise in Seattle.

“It’s really cool, but I just know that there are other women as qualified as well, but they just haven’t had the opportunity,” Granato said in a press release announcing her hiring. “I think that it’s really fantastic for Seattle to have a progressive view on hiring women in positions where they typically haven’t been.”

The sport seems to have enjoyed one front-page story after another in 2019, and the momentum shows no signs of slowing down.

For the second consecutive year, the United States will take on Canada in a three-game Rivalry Series, with U.S. dates having been announced in Hartford Dec. 14 and Anaheim Feb. 8. And the 2020 IIHF World Championships schedule recently was released. The 2020 tournament will be held in Halifax and Truro, Nova Scotia, March 31 through April 10.

Canada defeated the U.S. in last year’s Rivalry Series, two games to one, but the Americans captured their fifth consecutive world title in Finland last April.

Even MyHockeyRankings has jumped on the girls’ hockey bandwagon. In our most recent rakings, nearly 700 North American girls’ club teams were represented. That number that will grow as the season progresses when we begin ranking high school teams from 11 states, more than 50 New England prep school teams and six U.S. independent prep school programs, Canadian college programs and NCAA Division I, II and III teams.

When all is said and done, MHR will rank nearly 1,000 girls’ and women’s teams from around the continent. That number grows on an annual basis just as participation and interest in the sport continues to rise

Granato, who was part of the 1998 U.S. gold-medal-winning team when women’s hockey made its Olympic deabut in Nagano, Japan, is excited about the involvement of current players in growing the game and what the future holds for young hockey players.

“We were lucky enough to have the opportunity, and I think all of us who were a part of that ’98 team wanted to reach out to the younger generation,” she told USA Hockey after accepting the position with Seattle. “We took it very seriously, because we wanted to be an inspiration to them and show them that the dream isn’t so unattainable … {Today’s players} can reach the girls so much more than we ever could, and I think they’re using it the right way, and it’s really amazing to see.”