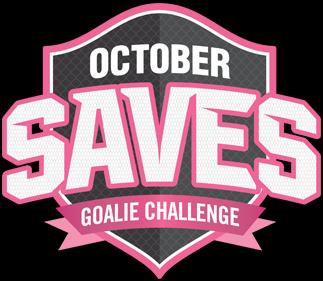 Lara Hopewell thought that nothing could be tougher than fighting and beating cancer, which she did. Well, that was before she faced the realities of being the mother of a youth hockey goalie.

Make that the mother of two youth hockey goalies.

Today as a survivor, she uses the strength, passion and knowledge gathered from dealing with both of those daunting situations to raise money and continue fighting cancer, which is described by the World Health Organization as the second-leading cause of death globally.

Hopewell’s “October Saves” fundraising program combines her desire to raise money to benefit continued cancer research and support programs with the unique position her sons Will and Aidan play to create a powerful community of goalies all over North America that raises difference-making sums of money on a yearly basis.

Started in 2014 with all 28 of the goalies in the Ashburn (Va.) Xtreme youth hockey program participating, October Saves expanded into Canada last year and continues to grow on a yearly basis. That first year, the club’s goalies raised an eye-popping $32,000. The next year Hopewell invited the Howard Huskies, a large program in nearby Columbia, Md., to join in, creating a friendly fundraising competition.

“It all started with an excel spreadsheet to keep track of everyone who registered and a few flyers,” Hopewell recalled. “I found a photo of a pink brick wall and kind of went with that as a symbol of what we were doing and thought maybe all together we could raise $5000 and that would be great. When we ended up at $32,000, it was like, ‘Holy cow, that really took off more than I expected.’ The goalies loved it and got behind because it caused people to really focus on them for one month and to see what they do. It was great for them to be team leaders for that month.”

The numbers improved substantially in year two. Also in 2015, NHL goalie coach Mitch Korn – then with the Washington Capitals and now the New York Islanders – got involved and donated a week at one of his camps as a prize. Eventually the Chesapeake Bay Hockey League, which includes pretty much all of the Tier 2 travel programs in Maryland, D.C. and Virginia, began supporting the program, and even USA Hockey got on board. Now, six years since starting October Saves, Hopewell expects to exceed $1 million in donations.

“It’s really crazy,” Hopewell said. “We just keep growing. Every year we try to see what we can do that’s new or different to keep it going. We expanded to Canada last year, and this year we have added captains in each state in an attempt to increase our reach on a more personal level and to get into the individual clubs. According to USA Hockey, there are over 18,000 youth players registered as goalies. Last year we had 700 participating, so we’re talking tip of the iceberg here. The growth potential is really exponential just in the U.S. Then you have Canada where hockey is so huge. I mean there are rinks and goalies everywhere there. We are just scratching the surface.”

October Saves, as its name suggests, runs throughout the month of October, which is both Breast Cancer Awareness Month and Hockey Fights Cancer Month. Registration opened on Sept. 1. Goalies can go to www.OctoberSaves.org to sign up, at which point they get their own page within the website. They are encouraged to give their page a unique look by uploading photos, and then throughout the month they return to the page to record how many saves they made in each game.

Goalies can solicit donations from family members, family friends, teammates, teachers, classmates, their parents’ co-workers or anyone else. Pledges can be made on a per-save basis, or there can be flat-fee donations.

There is a resource page on the website that participating players and clubs can use to find a sample donation-request letter, a sample letter to the club to get behind the program and the pink brick wall photo to print out and hang up as a reminder about the program and motivation. There also is a marketing flyer and pink helmets that clubs can print out, laminate and hang on a wall at their rink with each participating goalie’s name on his or her own helmet. Helmets can be moved up a fundraising chart to track each participant’s progress.

The website also takes aim at each goalie’s competitive nature by posting weekly updates of the top fundraisers and offering prizes to further incent the participants. Donors and goalies are encouraged to participate in honor of someone close to them who has fought, is fighting or has lost a battle with cancer.

“The prizes are fun, and the kids think they are cool,” Hopewell said, “but so many of them have been affected by cancer in some way that they really take it to heart and want to do something in honor of a family member and to help others. Some of the stories really pull at your heartstrings. It’s amazing what the kids are doing.”

“I think the program also is really good because goalies play a very stressful position,” Hopewell said. “Part of the reason I started it was because I wanted the kids to feel really great about themselves and for people to see what they were doing and have more of an appreciation for them. This is a great outlet for that. It’s really good for them all the way around. I really want them to love this and feel good about themselves and do something great for the community while they’re at it.”

This year, for the first time, state “captains” have been recruited to help spread the word throughout hockey’s grassroots into areas that have not been reached to date. Thus far, October Saves has made its way to 22 states. For any captains who help his or her state achieve $50,000 in donations, $5,000 will be donated to a charity of his or her choice within the state. If that number climbs to $100,000, then $10,000 goes to the designated charity.

“This year we are really working to get money raised by the kids put back into their local communities,” Hopewell said. “We want to make them feel like they are really making a difference.”

Hopewell feels it is imperative to ensure that the money raised is distributed to reputable organizations in such a way that it can impact as many people as possible. With that in mind, she asks each state captain to submit three charities of choice if they reach the $50,000 plateau so those organizations can be investigated and proven worthy of receiving the money.

“We work really hard to make sure that the money is going to the right places in the community that are going to make a difference and are not wildly flinging money at this or that,” Hopewell said.

With a state-of-the-art website replacing the old excel spreadsheet and providing everything that participants and donors need and the continued expanding reach of social media and 21st-century technology, Hopewell sees no reason October Saves can’t continue to grow.

She and her group of dedicated volunteers, including her husband Rob and her two Washington Little Caps’ goalies, donate countless hours to keep things running smoothly. The rapid growth of the program has forced her to bring on a public relations professional and to hire some marketing assistance, but those are good problems to have.

Until recently, October Saves was essentially a three-person volunteer operation – not including family. Hopewell said the program is pretty much a second full-time job for her between July and January.

“Our whole family gets involved,” she said. “It’s truly a labor of love. It’s so cool to watch the kids do what they do in the community. And they do these things for all the right reasons and for people close to them – whether it’s a grandmom or their mom or one of their friends – people who mean a lot to them and have been behind them. The kids are incredible and what they do is such a good thing all around for the community.”

FOR MORE INFORMATION OR TO REGISTER FOR THE OCTOBER SAVES PROGRAM, GO TO WWW.OCTOBERSAVES.ORG.