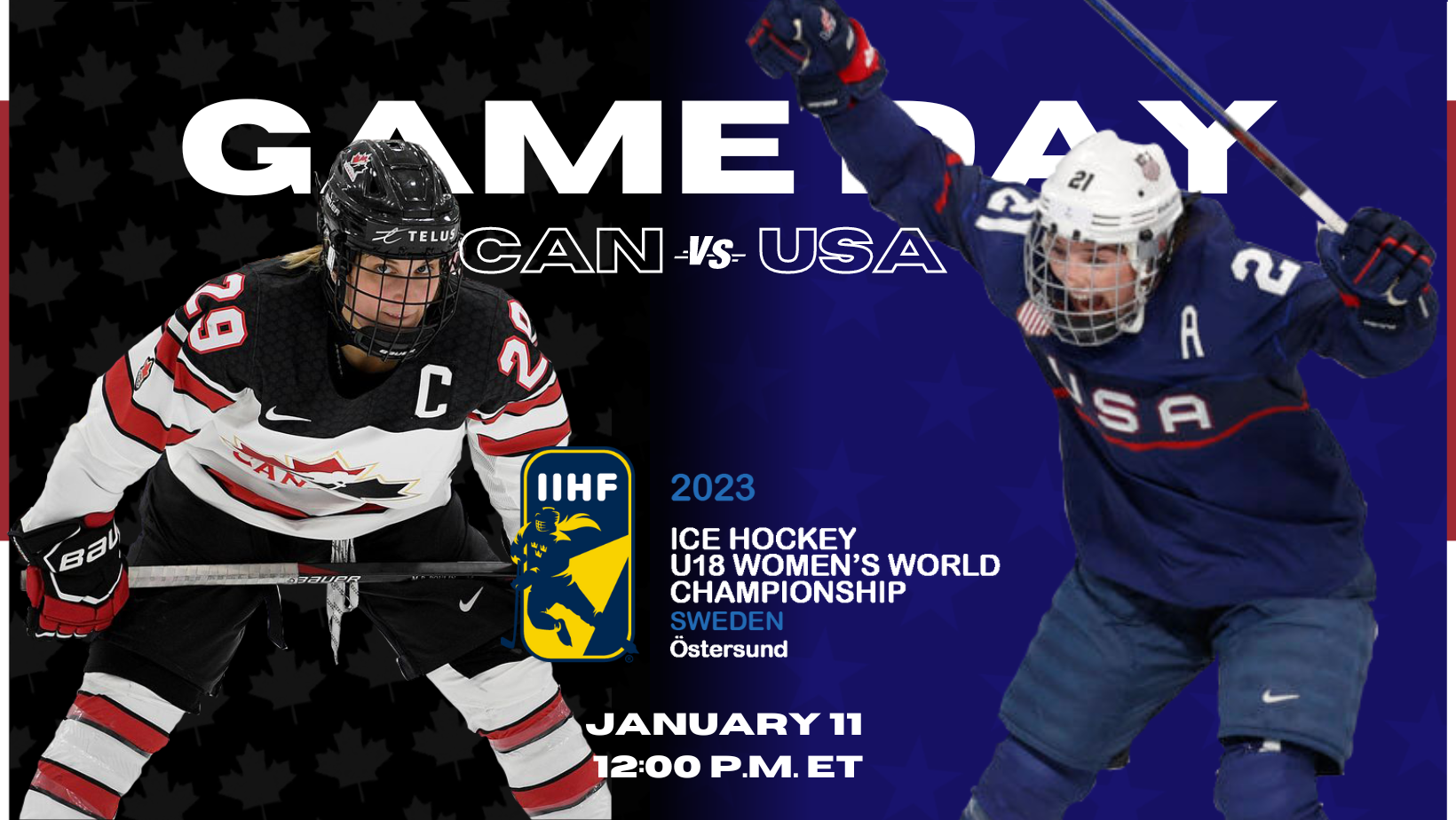 They come from all over North America.

From the largest metropolitan areas and the smallest of towns. From hockey hotbeds and areas where many of the residents may never have seen a hockey game in person. Some of them even will end up as teammates fighting for each other at the NCAA Division I level or possibly as professional players

For the most part, their long-term goals are the same. They want to keep climbing the national-team development ladder until their name appears on their nation’s rosters for the biggest international hockey events such as the Women’s World Championship and the Olympic Games.

Beyond that, maybe the women’s professional game will continue to evolve to the point that they can make a living playing the game they love. If not, they’ll play at the highest level they can to make a few bucks and balance that with full-time careers and their families.

None of that matters right now, though.

When the United States and Canada step on the ice to renew their heated rivalry at the International Ice Hockey Federation U18 Women’s World Championship in Sweden Wednesday, the only thing on the minds of the players – no matter which color or flag they wear – will be doing everything in their power to defeat and humiliate the opposition. Period.

And the worse the beatdown they can put on their foes the better.

Usually, beatdowns are not in the cards when these two international hockey powers collide, but at the 2022 U18 WWC last June in Wisconsin, the United States embarrassed their fiercest rival to the tune of shocking 7-0 victory. That anomaly proved to be motivation for the Canadians, however, as they came out of Group A as the second seed and rebounded to win the one that counted, 3-2, to snatch the gold medal from the Americans’ grasp.

To understand how surprising that preliminary-round victory was, we need to look at the history between these two teams.

According to USA Hockey, the two countries have met 21 times at the U18 WWC, with the U.S. holding an 8-5-4-4 edge vs. Canada. In terms of straight wins and losses, that translates to a 12-9 advantage for the U.S. In preliminary-round games, the Americans are 5-2 vs. Canada.

But in the playoff round, when the pressure ramps up and a medal is on the line, the teams have met in all but one of the tournament’s 14 gold-medal games. The only year they didn’t play for gold was when the U.S. beat Sweden in 2018, and in those 13 championship-game contests, the Americans hold a slim 7-6 advantage.

All-time at the U18 level, including the U18 WWC and summer-series games dating to 2007, the two nations have met on the ice 61 times, according to Hockey Canada. Canada holds a 32-29 edge in those contests along with a narrow – and amazing – 171-169 advantage in goals scored. The nations have gone 9-9 in games that have required overtime or a shootout.

It can’t get much more even than that, and today in a game that can be seen live on NHL Network in the United States and TSN in Canada, we should have two ultra-motivated sides in a rivalry that needs no extra incentive to be one of the fiercest in sports. There’s no doubt that the pain of June's gold-medal loss still is fresh in the minds of the Americans, and you can be sure that the Canadians still are ticked off about their preliminary-round showing last year and want to return the favor this time around.

It’s the recipe for yet another classic USA vs. Canada tilt.

The two teams have secured the top seeds in Group A and the quarterfinal byes that go along with that status. They will be heavy favorites against whoever they play in the semifinals and are virtual locks to meet again for the gold medal. You would think that under those circumstances they might take it easy and not lay all their cards on the table today.

Whenever these two nations compete in an international tournament, they want to go 2-0 against their biggest rival. They want to leave no doubt as to which nation is superior on the ice.

Will U.S. forward Maggie Scannell, who has four goals and three assists through two games, be able to continue her offensive dominance against the reigning world champs after recording five points – including a hat trick – in her most recent outing vs. Finland?

Can the Americans keep converting on the power play at a 60-percent clip against a Canadian team that somewhat suspiciously found itself shorthanded for more than 20 minutes in its 4-2 win against Sweden?

Will the Canadians find their discipline and be able to play their usual brand of fast, skilled and physical hockey while imposing their will without getting whistled for penalties?

Can Canada’s Caitlin Kraemer, who has scored a pair of goals in both games and four in the tournament, and her linemates match Scannell and the talented Americans offensively?

"I think that our team handled the ups and downs well, especially for such a young age," Canadian head coach Courtney Birchard-Kessel told The Canadian Press after Canada beat Sweden. "It is super easy to get down on yourself or too high and throw yourself off your game.

"Something we have focused on right from the start is making sure we can remain composed. We have to remain balanced, on and off the ice; the players on the bench are a big part of staying focused and staying concentrated."

Scannell’s seven points rank second in the tournament, behind Nela Lopusanova of Slovakia, who has 6-3-9 in three games. Kraemer has five points and is tired for third with Slovakia’s Zuzana Dobiasova. Alex Law, who will be suspended for today’s game because of a slew-foot incident against Sweden, has 1-3-4, and Joy Dunne of the U.S. has 1-2-3.

Teamwise, the U.S. leads the tournament in scoring efficiency, averaging seven goals per game to Canada’s six per outing. The Americans also are first in shots per game at more than 40, with the Canadians averaging 39.5 per contest. At 60 percent efficiency, the U.S. has the top power play, with Canada second at 37.5 percent. The Canadian goalies have been the best in the tournament, recording a .963 save percentage and 1.00 goals-against average compared to .923 and 2.00 for the United States.

The big difference between the two teams thus far has been the number of penalties Canada has taken. The Canadians have been whistled 18 times, compared to 12 for the Americans, so the difference in the game likely will come down to discipline, special teams and goaltending.

As always, it’s too close to call.

The funny thing about this rivalry is that if you tossed every player’s name into a hat and selected two teams by drawing names blindly, the players would love their teammates and compete just as hard as they do now representing their countries. That’s what makes players and teams great.

Each of these players has worked nearly her entire life for this opportunity. And they will continue working in hopes of one day earning a spot on the senior national team and representing their country on an even larger stage. Some of them may become college or professional teammates at some point and those who do likely will become great friends. They all have the common goal of promoting the sport of women’s hockey and continuing the momentum those who came before them have generated.

They are all a lot more alike than they are different, and if we gave them lie-detector tests more than likely we would find out that they form a mutual-admiration society.

For Canada, seven players from the 2022 gold-medal team returned to compete at the 2023 U18 WWC, which means there are 16 newcomers.

The roster is comprised of 14 players from Ontario, three from British Columbia, three from Quebec, two from Alberta and one from Manitoba. Fourteen of the players compete in the Ontario Women’s Hockey Association at the U22 Elite level, five play in Western Canada’s Canadian School Sports Hockey League and four are on school-based teams from Quebec or Manitoba. Five players are from the London Devilettes and three come from the Etobicoke Dolphins of the OWHA.

On the American side, nine players hail from Minnesota, with California, Massachusetts, Michigan and New York producing two players apiece. Connecticut, Florida, Missouri, Montana, Pennsylvania and Vermont each have one player on the U.S. roster.

They come from all over North America, but their hopes and dreams are very similar no matter which side of the border they call home. On Wednesday, though, while winning is the goal for all 46 players on both rosters, they will do anything in their power to make sure that their side is the one that is successful.

Fortunately, we just get to sit back and watch the future stars of international women’s hockey giving everything they have in the name of national pride.