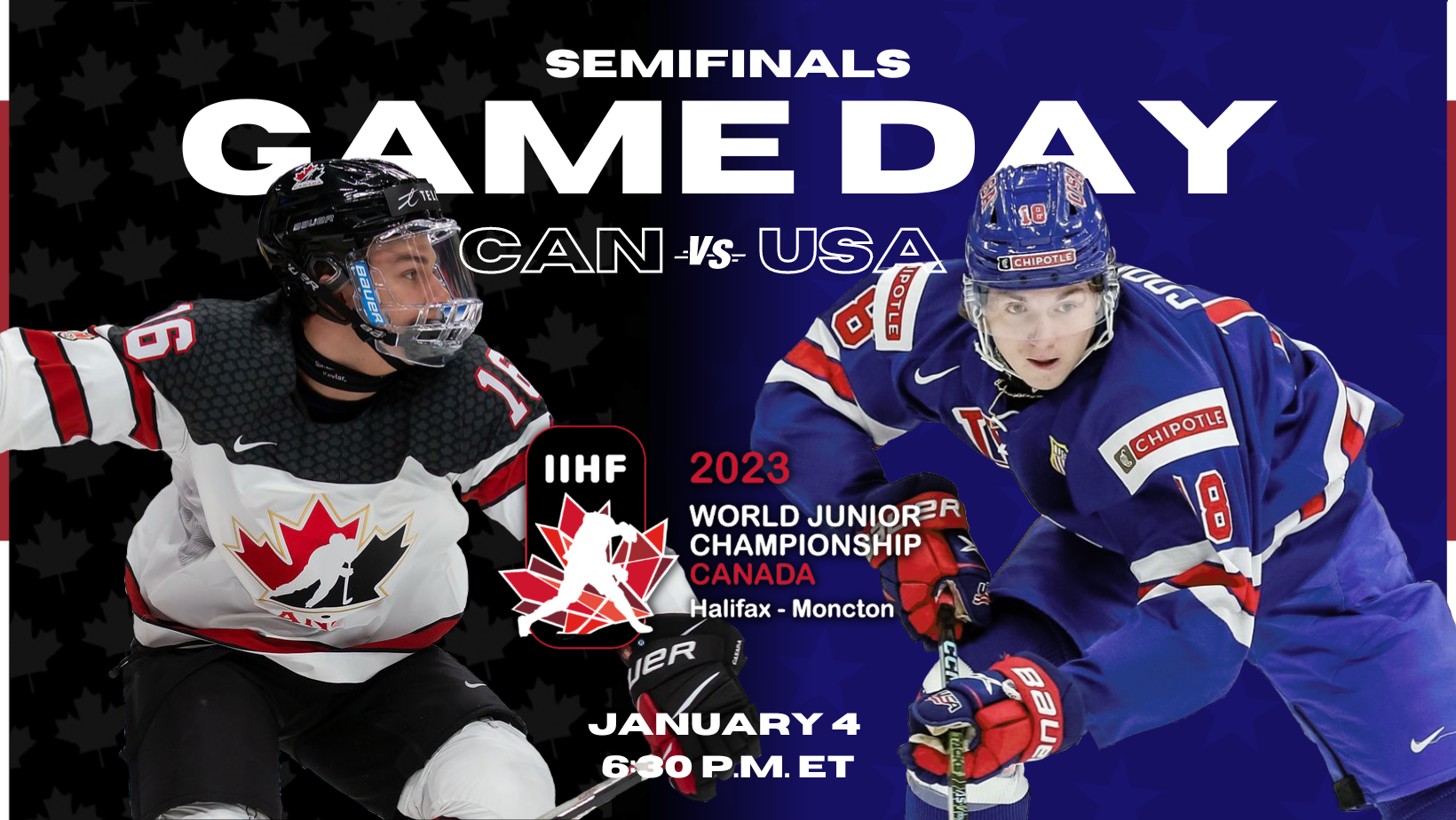 About the same time that my son started getting serious about hockey – and started to show that he might have the potential to play at a higher level of some sort – we stumbled across this thing called the World Junior Championship on television. Being from a non-traditional hockey market and naïve to the world of junior hockey, we had no idea what we in for upon making our discovery on that fateful December day.

It was the perfect storm.

He was falling in love with hockey, along with the idea of being the best player he possibly could be and hopefully playing in college one day. The NHL Network was in its infancy and looking for programming to fill its 24/7 hockey docket during a slow time of the year. And I’m sure we were sitting around the house a little bit bored since his youth team was on its holiday hiatus.

Some people binge watch Netflix. That December we binge-watched the WJC. And we were hooked.

When we first saw a bunch of teenagers flying around the ice and competing for their countries, we had no idea what to expect in terms of the tremendously high level of play and the intensity brought to the arena by the players and fans.

The idea that teenagers could play at that level in that environment with so much at stake and every professional scout in the world watching them was difficult to comprehend, but amazing to watch. And it was hard to imagine that those players were only a few years older than my son and that just a few years later he would be skating with players who would ultimately end up competing on that stage when he was chosen to participate in USA Hockey’s Southeast District Selection Camp in Charlotte, N.C.

Of course, we had heard of the WJC, but living in a market where after many years hockey finally was generating widespread fan interest thanks to some kid named Ovechkin, we knew next to nothing about it. Once we turned it on, though, we couldn’t take our eyes off it, and quickly we realized that we were watching the next wave of young NHL superstars giving their all in the name of national pride.

Very few sporting events are as exciting as high-level international hockey, especially when fierce rivals such as the United States and Canada, Finland and Sweden or Russia and either of the North American sides face off. While it had been great to watch the world’s top professionals finally get to compete in the Olympics, the WJC brought back memories of past “amateur” Olympics, which featured the Soviet dynasty, the United States’ Miracle on Ice team and the us against them North American vs. Eastern Bloc cold-war rivalries.

While we didn’t make our discovery in time to see players like Ovechkin, Crosby, Malkin, Lindros and Gretzky play in the WJC, during the first tournament binge I can remember watching two of the most exciting and intense USA vs. Canada matchups ever played. And our first few years of viewing introduced us to names such as Tavares, Eberle, Hall, Pietrangelo, Subban, Couturier, Johansen, Ellis, Kassian, Cizikas. Carlson, Kreider, Stepan, Palmieri, Kadri, Campbell, Zucker, Faulk, Kuznetsov, Orlov, Panarin, Tarasenko, Forsberg, Landeskog, Klingberg, Lehner and on and on. The WJC talent pool is seemingly endless.

Watching those young stars representing their countries one year and then seeing them excel in the NHL often just a few months later gave us an even greater appreciation of the level of play we were witnessing. And, as longtime fans of the Washington Capitals, it was fun to watch young and talented players they had drafted such as John Carlson, Evgeny Kuznetsov and Dmitry Orlov who ultimately would join the Alex Ovechkin in D.C. to form part of the core of their 2018 Stanley Cup-winning team.

Thinking about Carlson brings us back to the heated Canada vs. USA rivalry and the amazing games those two nations played during the 2010 WJC. Their first meeting was a preliminary-round contest on New Year’s Eve 2009.

Canada won the game, 5-4, in a shootout. Nazem Kadri and Jordan Eberle contributed two of the team’s three shootout goals and Jake Allen made the deciding save to seal a victory that saw the Canadians rally from a two-goal deficit midway through the third period to tie the game with about 4 minutes remaining on a goal by Alex Pietrangelo.

That game was played in front of more than 15,000 rabid, red-wearing, flag-waving Canadian fans in Saskatoon, and I remember watching the comeback, seeing the emotion it generated and being angered by the result. The intensity level of the game was off the charts, and the energy in the arena for a game between what amounted to two teams of kids was at a level I had rarely seen despite working for more than 25 years at all levels of sports.

Of course, I wasn’t that familiar with the tournament format, so I was unaware that the teams were likely to meet again a few days later for gold. The victory gave Canada the top seed for the quarterfinals in the two teams’ pool and set the stage for an even more memorable (perhaps more forgettable if you’re from Canada) gold-medal clash.

In another matchup that featured incredible intensity and an electric atmosphere that had to be seen to believed, the U.S. captured the gold medal when John Carlson looked off a Canadian defender before firing a laser past future-NHL goalie Martin Jones for the overtime game-winner.  The game followed a familiar script, with Eberle’s two goals in the final three minutes of regulation sending the Canadian faithful into a frenzy and forcing extra time.

That victory for the U.S. ended a string of six-consecutive wins for Canada against the Americans at the WJC, including two semifinal wins, dating to a 4-3 victory for the U.S. in the 2003 gold-medal game. For our family, those games put the WJC on our radar for eternity, and every year since during the holidays we have looked forward to at least one epic battle between the two teams.

Some of those games took place on Jan. 31 as New Year’s Eve became known as WJC Rivalry Day, but oddly since those two memorable battles during the 2010 tournament, the two nations have met just four times outside of preliminary-round play. Canada knocked of the U.S., 4-1, in the semifinals, in 2011, while the Americans earned a 5-1 semifinal victory in 2013. The North American rivals have met just twice since then in gold-medal games, with the U.S. winning the championship in a 2017 shootout and by a 2-0 margin in 2021.

Canada rebounded from that heartbreaking 2021 loss to defeat Finland for its second gold medal in three years at last summer’s rescheduled WJC. Finland has been the only nation to win gold other than the Canada and U.S. since 2013, capturing the championship in 2016 ad 2019. The Canadians have taken home four gold medals to the Americans’ three during that span.

Still, the playoff-round meetings between Canada and the U.S. in recent years have far fewer than hoped or expected. The 2021 gold-medal clash was their first elimination-game tilt since 2017, and prior to that they hadn’t competed in a playoff matchup since 2013. The nations have split their 12 WJC meetings since the Carlson OT winner, but the Americans have won five of the past six matchups. Canada won three straight games and five of six against the U.S. to rebound from that devastating loss prior to the recent USA run.

Tonight, at 6:30 p.m. Eastern Time, the two teams finally meet again on Canadian ice at Scotiabank Center in Halifax, Nova Scotia, with a trip to the 2023 WJC gold-medal game on the line. Both teams sputtered out of the gates this time around as Canada opened tournament play with a surprising loss to a fast and skilled Czech team while the Americans dropped a shocking opening-round decision to a solid club from Slovakia.

Both North American sides have taken care of business since those upset losses, however. The U.S. captured the top seed in Group B, knocking off Switzerland, 5-1, and a strong Finnish squad, 6-2, in the prelims before hammering Germany, 11-1, in the quarterfinals.

The road was a little more challenging for Canada, which placed second behind the Czechs in Group A and needed an all-time WJC highlight-reel goal from future No. 1 NHL draft pick Connor Bedard to defeat the Slovaks in overtime and advance to tonight’s semifinal.

Bedard has been the story of the tournament thus far. He notched three points in the quarterfinal victory to become Canada’s all-time leading WJC scorer while also breaking his nation’s single-tournament scoring and all-time goals records. Bedard leads all tournament players with eight goals and 13 assists for 21 points in five games.

Despite the opening-night loss to Czechia, Canada has been the dominant offensive team of the tournament, outscoring its opponents by a 29-8 margin in the preliminary round. The U.S. outscored its first four opponents, 19-11, before the quarterfinal rout of Germany.

Throw all of that out the window tonight, however. Just like with any of the top rivalries in sports, past records, preliminary-round results and which team is better on paper won’t matter when the puck drops in Halifax.

In fact, no one can predict the outcome when the United States and Canada meet on the ice anywhere, any time and at any level. What is certain, though, is that tonight’s game will be as fast, intense, hard-hitting and exciting as any we will watch see this season. The atmosphere will be unlike anything else we will see, and a bunch of kids will put on a show that makes us forget their ages and revel in their poise, talent and future potential.

And somewhere in North America, a young hockey player and his father or mother will happen to turn on the game and be wowed beyond belief. There will a huge swell of national pride and new dreams for the future will take shape as two fierce rivals battle for a chance to be world champions.

Rivalries like this should never take a year off. Enjoy!