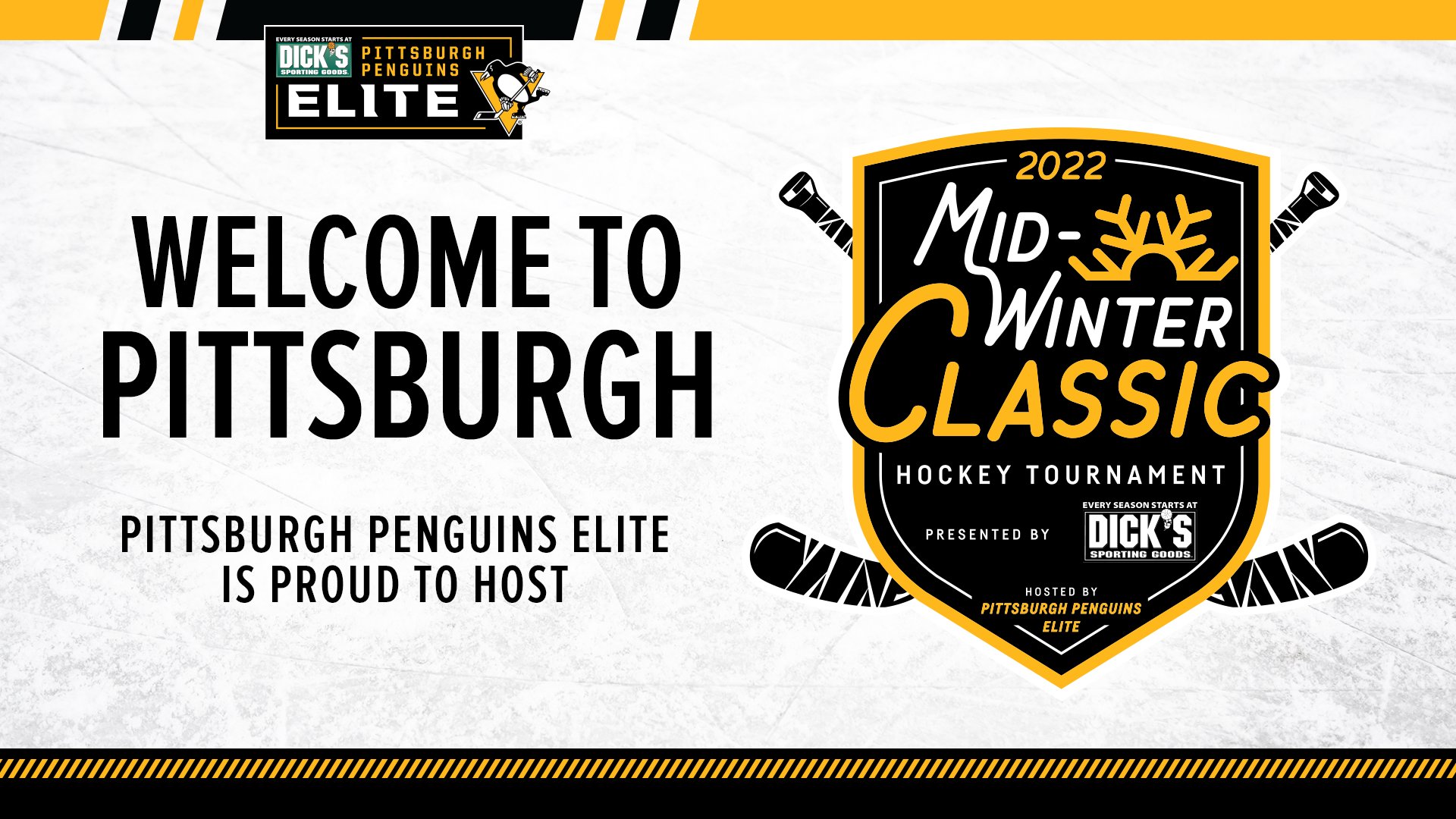 Winter holiday tournaments continued last weekend, and that was one of the focuses of our Games of the Week as we highlighted two games from the Pittsburgh Penguins Elite Midwinter Classic and one from the North American Prospects Hockey League Showcase in Blaine, Minn. We also featured a regular-season two-game series between top-five Tier 2 USA Boys 16U teams from the Central States Developmental Hockey League.

Our first two featured games were part of the Penguins Elite Midwinter Classic in the Pittsburgh area and included top-15 Tier 1 USA Boys teams competing in the 2010 and 2011 age groups. In the 2010 division, we had the No. 1 Philadelphia Jr. Flyers taking on the eighth-ranked Buffalo Jr. Sabres, while our 2011 matchup featured No. 6 Rochester Coalition against the No. 14 New Jersey Colonials. Both games were Saturday and still can be seen on-demand on LiveBarn.

Here are the 2010 teams that competed in the tournament with their final records:

Below are the 2011 teams that competed in the tournament with their final records:

Our third Week 13 matchup was a two-game CSDHL series between a pair of top-five Tier 2 16U Tier 2 teams as the second-ranked Chicago Bulldogs traveled to Missouri to take on the No. 5 Afton Americans in Friday and Sunday Central States Developmental Hockey League (CSDHL) tilts. The CSDHL is one of the top AA leagues in the United States, currently boasting four of the nation’s top 10 16U Tier 2 teams.

And finally, for our final highlighted game of Week 13, we headed to the National Sports Center Super Rinks in Blaine, Minn., for a matchup from last weekend’s North American Prospects Hockey League (NAPHL) Showcase. Sunday’s featured contest was from the NAPHL 18U Showcase Division and pitted the No. 16 USA Boys Tier 2 Texas Tigers against St. Viator, the No. 6 Illinois high school team.

CLICK HERE for all of the NAPHL Showcase game results.

The top-ranked Jr. Flyers faced a challenging preliminary-round matchup at the Pens Elite Midwinter Classic against the No. 8 Jr. Sabres in one of the tournament’s top early contests. Philadelphia skated to a 5-3 victory in this one on the way to an unbeaten 4-0-2 showing at the tourney. Following a scoreless opening period, the Jr. Flyers would tally three times in the second frame to take a 3-0 lead into the third. Theokritos Petropoulos, Matthew Lynn and Henry Albu scored for Philly, with four different players assisting the three different goal-scorers. The Jr. Flyers extended the lead to 5-0 in the final period as Matthew Lynn tallied twice in a span of seven seconds to complete his hat trick, with Bo Christini picking up his second assist of the game on Lynn’s first goal of the period. Evan Vukelic led a furious late Jr. Sabres rally, scoring twice in 31 seconds, with Jack Murphy adding a goal less than a minute later as Buffalo scored three times in the final 1:50 to cut the margin to the final 5-3 score. Charles Liu got the win over Olivia DeLisle in goal. With their tournament showing, the Jr. Flyers held on to the top spot in the MHR rankings with a record of 37-4-3. Buffalo, which was 2-2-1 on the weekend, moved up to No. 5 and is 27-11-2 overall.

Sixth-ranked Rochester Coalition entered the Midwinter Classic with something to prove. Despite their high ranking, Roco’s record was 16-17-1 thanks to their tackling one of the nation’s most-challenging schedules to date. It didn’t get any easier over the weekend. In this contest, they faced the No. 14 New Jersey Colonials in an important pool-play matchup, coming away with a hard-fought 2-1 victory. The teams traded second-period goals after a scoreless opening frame as Rochester’s Jeffrey Williams struck first with assists going to Thomas Krause IV and Charles Sadai. That tally was answered by New Jersey’s Joseph Lacapruccia, who scored an unassisted goal to tie the score on the power play with 9:41 left in the second period. Justin Corey’s unassisted goal with 10:21 left in the third proved to be the GWG, making a winner out of netminder David Stefaniak. Stefaniak outdueled New Jersey goalie Michael Gonnella to earn the victory. Rochester posted a 4-1-0 record in Pittsburgh to improve to 20-18-1 on the year and move up to the fifth spot in the Week 13 rankings. New Jersey went 1-2-1 but still moved up to No. 14 this week at 15-15-6 overall.

We featured a Friday-Sunday CSDHL weekend series as a pair top-five powerhouses faced off in huge league matchups. Following the weekend split, Chicago is 15-4-1 in league play, good for 32 points, while Afton is 15-8-1 and also has 32 points. The Bulldogs have four games in hand, however, so they get the nod for second place in the CSDHL right now. Both teams hold onto their national rankings for Week 13, with Chicago boasting a 30-6-5 overall record and Afton at 20-8-3. The Bulldogs also played three games against the No. 7 Chesterfield Falcons during an exhausting weekend, winning by 3-2 and 4-1 scores Saturday and falling, 5-1, Sunday after knocking off Afton, 5-0, earlier in the day. The Americans took Friday night’s matchup with Chicago by a 5-2 margin. Afton sprinted out of the gates to a 4-0 lead in that contest thanks to goals from four different players – Colin Markotay, Blake Houston, Brady Cook and Blake Geiser – before the Bulldogs finally got scores from Mason Kading and Andrew Holtzman in the third period. Houston scored an unassisted goal for Afton with one second left. He and Cook finished with two points apiece, while Zachary Highfill made 19 saves to earn the victory in goal. In Sunday’s rematch, Brody Netzky stopped all 27 shots he faced to record the shutout and lift Chicago to the 5-0 victory. Kyle Cetnar paced the Bulldog attack with a pair of goals to go along with a single assist. Holtzman dished out a pair of assists, with Ilia Dolgun also recording multiple points by posting a goal and a helper. Riston Siegel and Adam Wabel also scored for Chicago.

In picking this game as one of our Games of the Week, we had no idea it would turn out to be such a thriller, requiring a shootout before St. Viator finally was declared the winner. Oddly, after a high-flying opening two periods, the game settled down in the final frame as only Texas managed to score when Zak Colson forced overtime at the 8:32 mark on a goal that was set up by Carson Spear and Skylar Bawcom. The Tigers surrendered the first four goals of the game – all in the first period – before responding with four goals of their own in the second to pull within 5-4 entering the third. St. Viator got goals from Nicholas Munao, Vitalii Strutynskyi, Jake Nieling and Evan Wenzel in the opening frame to seemingly take control of the game before the Tigers recorded three-straight goals in the first 6:27 of the second period. Sean Nutley halted the Texas push by scoring for St. Viator at the 10:34 mark only to see Bawcom cut the margin to 5-4 five minutes later. Colson’s third-period marker forced extra time, which was scoreless, and set the stage for the three-round shootout. Knieling was the only player to score during the skills contest, burying his attempt as St. Viator’s opening shooter while goalie Dominic Grimaldi turned aside all three Texas shots to earn the victory after making 34 saves during game play. Cole Fennema made 22 saves for the Tigers. Knieling was the offensive hero for St. Viator, finishing with a goal and an assist to go along with the shootout winner. Bawcom and Jackson Graff each had a goal and an assist for Texas. The Tigers are 3-3-0 in NAPHL play and 25-12-3 overall. They dropped to No. 17 in the USA Boys 18U Tier 2 Week 13 rankings after their weekend in Minnesota. St. Viator is 7-1-0 in league play and 23-11-2 overall