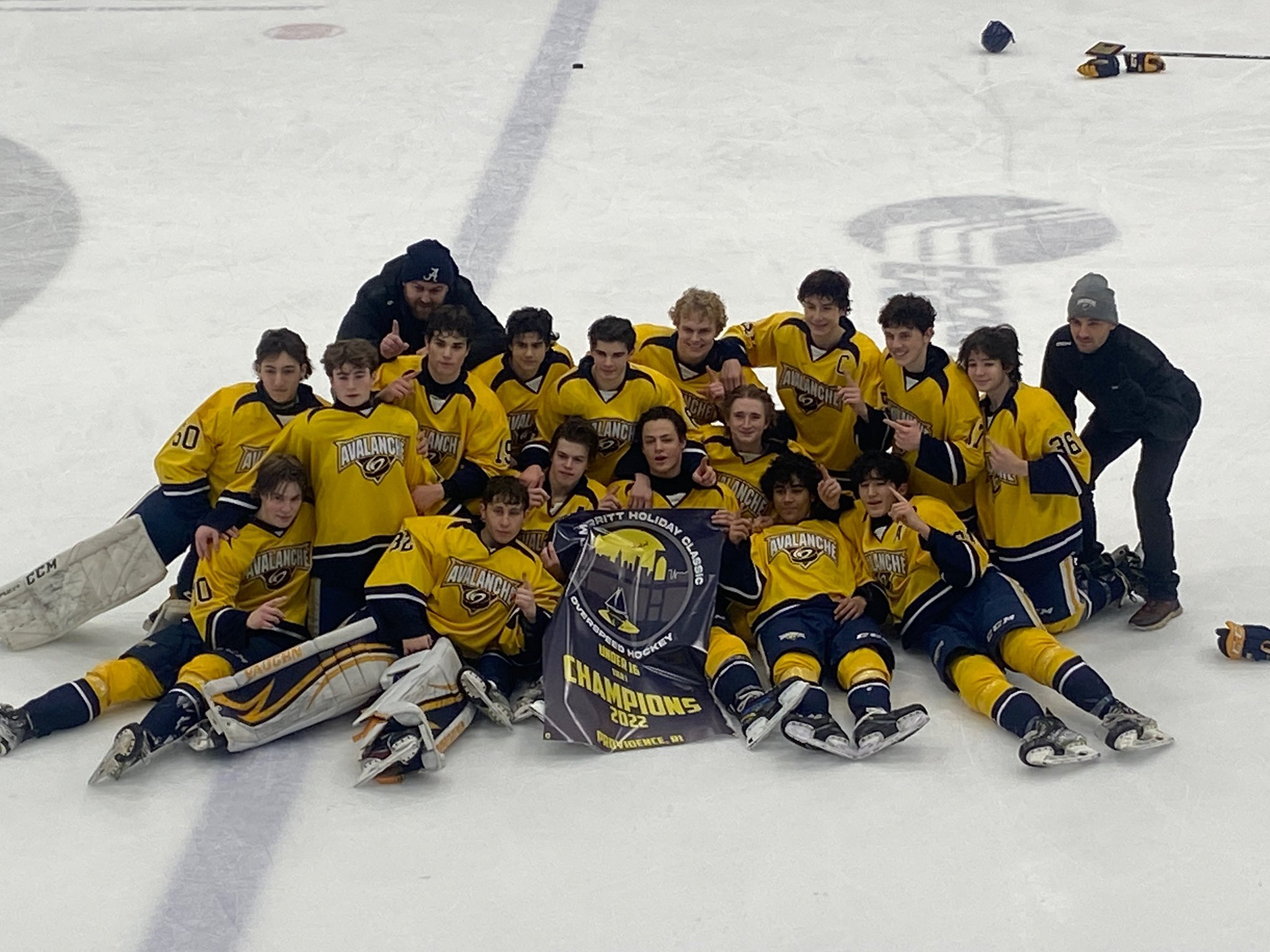 Well, holiday tournament season is underway, and the upsets already have begun!

Last week, for our Week 12 Games of the Week, we featured a game from the 16U Division of the Paul D. Merritt Holiday Classic in Rhode Island. While that game and age bracket went pretty much as planned, with the No. 5 Tier 1 National Bound North Jersey Avalanche knocking off No. 29 overall South Kent Selects Academy, 3-1, as part of a 4-0 weekend that resulted in a tournament championship for the Avs, the 18U division was much more chaotic.

At the 18U level, the Maine Nordiques entered the Merritt Holiday Classic ranked 35th among Tier 1 National Bound teams and 46th among all 18U teams. Entering the tournament they were the fifth-highest ranked team in the 18U field, behind No. 2/4 Mount St. Charles, No. 17 overall Northwood School, No. 30/41 Windy City Storm and No. 15 overall South Kent Selects Academy, but you’d never know that from their performance.

Maine went 4-0 on the weekend, earning a pair of one-goal victories before capturing the championship with a 3-0 win against second-ranked Mount St. Charles. The Nordiques also beat No. 15 overall South Kent, No. 66 North Jersey Avalanche and No. 88 Team Illinois en route to the title.

Several Maine players had impressive weekends, led by our MHR Peak Performer Shane Kozlina, who recorded five goals and four assists and netted three of his team’s four goals in victory against South Kent. Grant Dietz added four goals for the Nordiques, while goaltender Ryan Piekarski made 68 saves on 71 shots and recorded a shutout in the championship game to earn Tournament MVP honors.

The tournament championship and four victories catapulted Maine to No. 26 in this week’s Tier 1 National Bound 18U USA Boys rankings.

Meanwhile, in the 16U age group, the Avalanche moved to No. 5 in the Tier 1 National Bound rankings after its perfect weekend. North Jersey allowed just three games during the tournament and outscored its opponents, 21-3. The Avs beat No. 16 Windy City Storm, 2-1, in the finals to improve to 31-7-0 on the season.

The University of Michigan and the United States National Development Program also co-hosted a holiday tourney in Ann Arbor, Mich., and we highlighted a pair of 2009 top-12 teams as part of our Week 12 Games of the Week, with the No. 3 Dallas Stars Elite taking on 12th-ranked Florida Alliance at Michigan’s Yost Arena Saturday. Dallas won the game, 7-1, as part of a 3-1-1 weekend that allowed the Stars to hold onto their No. 3 national ranking.

Our third featured games from Week 12 were a pair of intense border battles as Canada’s top-ranked Prep team, St. Andrew’s College, hosted USA No. 4 Culver Academy for a pair of 18U Prep Hockey Conference contests Saturday and Sunday. The Prep Hockey Conference includes six of North America’s top-ranked school-affiliated hockey programs. St. Andrews and Culver split a pair of exciting games, with the Saints earning a 3-2 overtime win in Saturday’s opener before falling to the Eagles, 5-3, on Sunday. Culver moved up to No. 3 in the USA Tier 1 National Bound rankings following the weekend.

And finally, for our last Week 12 Game of the Week we headed to Western Canada for a U18/Prep Canadian Sport School Hockey League matchup between the Nos. 2- and 3-ranked teams in the region as Burnaby Winter Club Academy hosted Yale Hockey Academy Friday night. Six of Western Canada’s top-10 U18 teams compete in the CSSHL, and in this battle of top-three teams YHA scored a minor upset with a 4-3 league win.

The North Jersey Avalanche, ranked among the top-10 USA National Bound and overall 16U teams, took on South Kent Selects Academy, ranked 29th among all 16U teams in the nation, as part of the Paul D. Merritt Holiday Classic in Rhode Island. John Mustard was named tournament MVP after leading the Avs to a 4-0 record and the tourney title, including a 3-1 victory in this contest. North Jersey outscored its opponents, 21-3, during the weekend but were pushed to the brink in a 2-1 championship-game win against the No. 16 Windy City Storm that was described by tournament-organizer OverSpeed Hockey as one of the best games of the year on Twitter. The title game was scoreless through two periods before North Jersey potted two of three third-period goals for the win. The Storm broke the ice and scored with 10:48 left in the final period when Ihnat Pazii circled behind the net and dished a slick backhand feed to Mathew Croxall for the finish and a 1-0 lead. The Avs immediately applied the pressure and finally broke through for a score of their own to tie it at 1 with 6:11 remaining as Mustard buried Jordan Geike’s feed from the slot. It would take only 23 seconds after Mustard’s tally for North Jersey to net the game-winner as Benjamin Wilmott followed the play and potted the decisive goal after being set up in the slot by Michael Hillock’s nifty no-look feed. The Avs moved up one spot in this week’s rankings and are 31-7-0. They have outscored their opponents, 195-67.

A pair of top-10 AAA USA boys’ 2009 birthyear teams faced off at the homes of the University of Michigan and United States National Team Development Program as part of a holiday tournament featuring some of the top clubs in the United States. Dallas cruised to a 7-1 victory in this one and went 3-0-1 on the weekend before dropping a 2-1 shootout victory against No. 9 Little Caesar’s in the semifinals. The Stars beat LC earlier in the tourney, 4-2, along with No. 27 Compuware (2-0) and Florida. They tied the 29th-ranked Cleveland Barons, 2-2, and are now 28-13-1 on the season and still ranked third. Only two of Florida’s games from Michigan were entered into the MYHockey Rankings data base, so their record is listed as 15-10-2 and they hold on to their No. 12 ranking. The other listed score for the Alliance is an 8-2 win against the No. 54 Connecticut Jr. Rangers.

Two of North America’s top school-affiliated programs faced off north of the border in a pair of Prep Hockey Conference tilts over the weekend. St. Andrew’s was MHR’s top-ranked Canadian Prep team, while Culver was No. 4 in the USA Tier 1 18U National Bound rankings and No. 3 in the USA Independent Prep rankings. The Eagles moved up to No. 3 in the USA Boys 18U Tier 1 National Bound rankings following the split, with the Saints holding onto their top spot in the Canadian Prep rankings. Francesco Dell’Elce scored with 9:31 left in overtime off an assist from Jack Pridham to lift St. Andrews to victory Saturday after Culver’s Zach Zhang had tied the game with 17:51 left in regulation. Luke Hogan and Philippe Lalonde picked up assists on Zhang’s tally, which followed a goal by Dean Letourneau that had broken a 1-1 tie. Jack Good, who scored the Saints’ first goal, assisted on Letourneau’s tally along with Ben Power. Good tied the game at 1 in the first period after Romulus Riego De Dios had staked Culver to a 1-0 lead with a first-period short-handed goal. Liam Furey earned the win in goal for St. Andrew’s, turning aside 31 Culver shots. Vaughn Makar made 35 saves for the Eagles to take the hard-luck loss. Culver rebounded to earn the victory Sunday in a high-tempo game that featured 87 total shots on goal. Evan Tompkins turned away 38 St. Andrew’s shots in the victory, while Furey stopped 41 of the 46 shots he faced. Jacob Padgett’s goal with 1:28 left in the third period iced the game and turned William Shephard’s late second-period tally into the game-winning tally. Five different Culver players scored, with Lawrence Keenan, Riego De Rios and Benjamin Barrett also denting the twine for the Eagles. Letourneau, Dell’Elce and Anselmo Rego scored for the Saints. Culver is now 3-1-0 in league play and 13-5-0 overall, while the Saints are 3-4-0 in the PHC and 12-8-0 overall.

We highlighted a battle of top-three MHR Western Canada AAA U18/Prep boys’ teams in the hotly contested CSSHL, as Burnaby Winter Club Academy hosted Yale Hockey Academy. Although these teams entered the weekend ranked second and third, respectively, in Western Canada, they were battling to move up higher in the CSSHL standings. BWCA was 11-3-0 with a shootout win in league play, good for fourth place and 34 points, while YHA sat in ninth place with a 9-5-0 league mark. Yale overcame a pair of goals by Carter Lundie thanks to goals from four different players to earn the 4-3 victory after BWCA had rallied from a 3-1 deficit to tie the game on Brody Lindal’s goal with 14:08 left in the third period. Ben Kindel allowed YHA to hold off the Lions’ rally and skate away with the one-goal victory by scoring with 5:12 left in regulation. Kalan Anderlini, Justin Ivanusec and Savin Virk also scored for YHA, which concluded the weekend 10-5-0 overall and in league play. BWCA is 13-4-0 overall and 12-4-0 in the CSSHL, which lands them in fourth place even though their 37 points are tied with Pacific Coast Hockey Academy and Prairie Hockey Academy. YHA is in eighth place with 30 points but has played fewer games than all seven teams it trails in the standings.