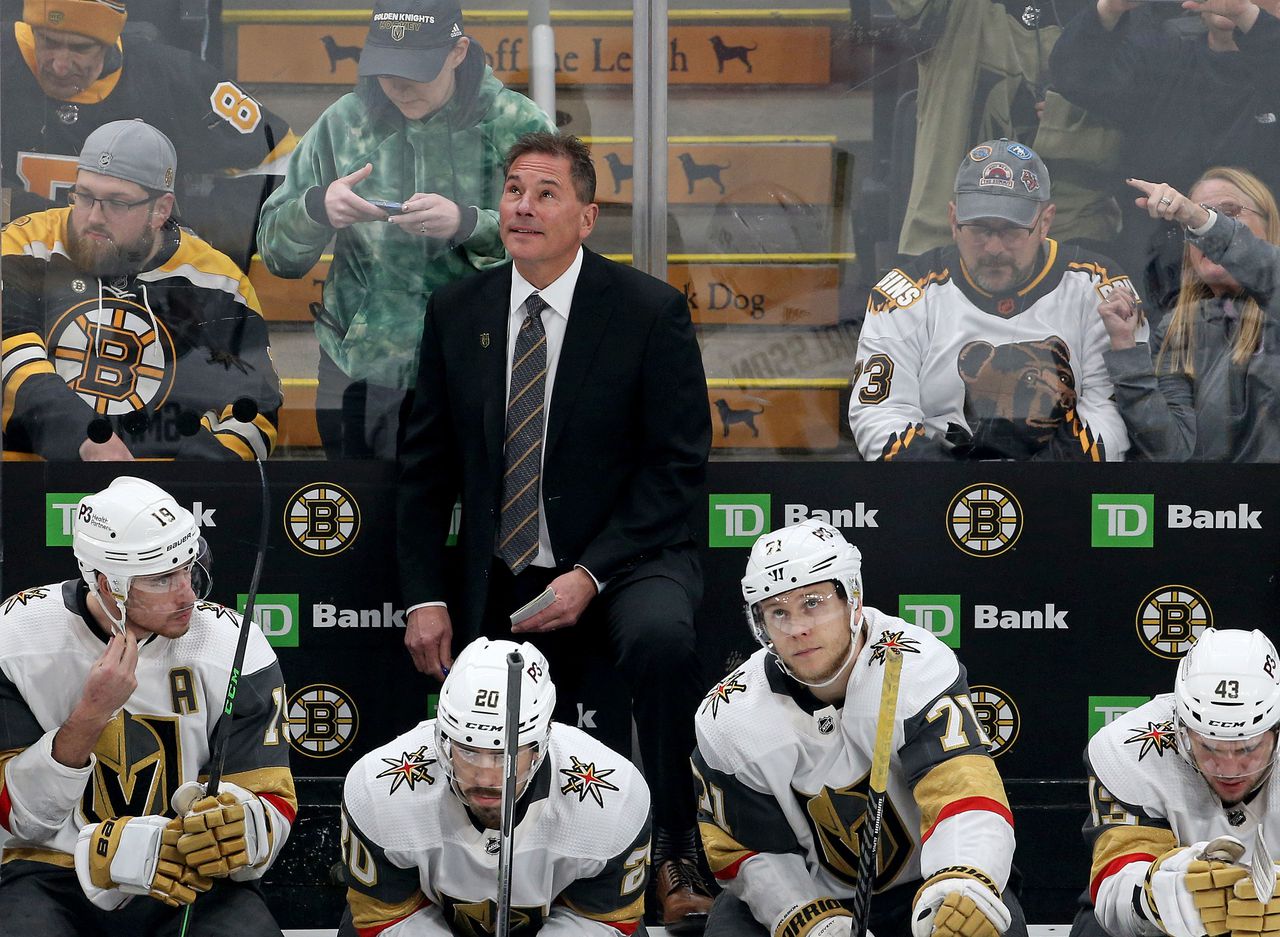 Just taking a minute to check in on the good folks of New England today and hoping that everyone is okay.

In case you haven’t heard, the Boston Bruins lost a hockey game Monday night. That’s rare footage these days, and we all know how seriously New Englanders take their hockey.

Offering up thoughts and prayers to all those affected by this terrible setback.

With the loss, the Bruins dropped to a staggering 20-3-1 on the season, but of course they didn’t go down without a fight. Trailing the Vegas Golden Knights, 3-0, in the second period, Boston rallied to score three times in the game’s final 26:14, forcing overtime on Taylor Hall’s power-play goal with 3:08 left in regulation before finally falling in a five-round shootout when Reilly Smith beat Boston netminder Jeremy Swayman.

Monday’s loss was dripping with irony as first-year Vegas coach Bruce Cassidy celebrated on the visiting team bench after the thrilling victory. It’s not odd that a coach would celebrate a big win against the league’s top team, except that if this game had been played about eight months earlier Cassidy would have been on the opposite bench, dejectedly trudging to the home-team’s locker room after a bitter loss.

Cassidy was relieved from his duties as Boston’s head coach last June after a successful six-year run that included annual playoff appearances, a Presidents’ Trophy and a trip to the 2019 Stanley Cup Finals. He received the Jack Adams Trophy following the 2019-20 season, coached through the difficult COVID years and was let go, much to the dismay of the Bruins’ fanbase, after a Game 7 loss to Carolina in the first round of last year’s playoffs.

Never a group to hide its emotions, Boston fans raged about Cassidy’s termination via social media and radio talk shows. The hosts of those shows and other local media joined the fray, attacking General Manager Don Sweeney and calling for his head over the decision to move on from Cassidy. They pointed to Sweeney’s questionable personnel decisions and an aging roster with a rapidly shutting championship window as the culprits for the Bruins’ early playoff exit. A Boston Globe headline read, “Brude Cassidy takes the fall for those who haven’t done their jobs as well as he did his.”

Sweeney cited the need for a new voice in the locker room when announcing his decision, which caught Cassidy and the entire region off guard. Cassidy took some time to ponder what had happened, initially responding to a reporter looking for a reaction via text with, “It’s still very raw.” Sweeney admitted to the media that Cassidy was surprised and didn’t take the news well.

I’m not sure exactly what response Sweeney was expecting considering the Cassidy would be leaving Boston with the fourth-best winning percentage in club history (.672) and as the organization’s third all-time winningest coach with 245 victories in fewer than six full seasons. Cassidy was able to mold an aging roster that was short on depth and had lost the services of its veteran starting goaltender for most of the previous two seasons into an annual playoff team with a legitimate shot at making deep postseason run.

Cassidy was stunned as were the team’s players and fans and the rest of the hockey world. Everyone knew he would land on his feet with coaching openings in Vegas and Detroit, and sure enough, there he was on the visitors’ bench knocking off his former team in a shootout thriller Monday night.

That might have been just the first of many memorable matchups between Cassidy and his former club this season, however, as his Golden Knights have been the top team to date in the Western Conference, rank third overall in the league standings and got off to a start that rivaled the Bruins’ scalding opening to their campaign. Vegas and Boston were neck and neck at the top of the NHL standings through the first six weeks of the season before the Golden Knights fell back to the pack a bit in recent weeks.

Boston sprinted to a 10-1-0 record in its first 11 contests and was 17-2-0 at one point before a recent “skid” that has seen them go 3-1-1 and leaves them at 20-3-1 on the year. Relatively speaking, Vegas “struggled” out of the gate to 4-2-0 record, but six weeks later they were right there with the Bruins at 13-2-0 before losing three of the next four. The Golden Knights are 3-3-0 since the phenomenal start, but they have won two straight and find themselves on top of the Western Conference, six points ahead of the next-closest teams in the standings and a dozen ahead of preseason Stanley Cup-favorite Colorado.

It's hard to believe after such a great start that Vegas is only six points in front of Seattle and Dallas, but it’s even crazier to think that the Bruins, who have won 20 of their first 24 contests and recorded points in 21 of 24 outings, are TIED with the upstart New Jersey Devils atop the Eastern Conference and only five points ahead of division-rival Toronto.

That bring us to the third great story of the 2022-23 season: the New Jersey Devils.

A franchise that seems to be in rebuilding mode every year finally has found its footing thanks to a perfect storm of their many high draft picks developing into consistent NHL players combined with savvy personnel decisions and surprising goaltending.

Predictably, the Devils opened the year with a pair of 5-2 losses to Philadelphia and Detroit, teams that were expected to fight with them for spots at the bottom of the NHL standings, but that’s where the predictability ended. New Jersey went on to win its next three before a 6-3 loss to Washington, a setback that propelled them to a ridiculous 13-game winning streak.

Entering the 2022-23 NHL season it was clear that we were due for a changing of the guard.

A stacked Colorado team finally broke through to win the Stanley Cup and knock Tampa Bay off its perch last spring, and the Avalanche were no less talented as 2022-23 began. Edmonton and its youngish superstars also got the monkey off their backs to make a deep postseason run last season, and the New York Rangers seemed to be primed for several years of success given their outstanding goaltending and combination of youth, veterans, skill and grit.

And we can’t forget about the supremely talented Maple Leafs. It should be only a matter of time until Auston Matthews and his high-flying supporting cast makes some postseason noise. Carolina also has emerged as one of the NHL’s top clubs during the past three years and appeared destined to contend at the top of the standings for the foreseeable future. Calgary completely retooled after a strong 2021-22 campaign and seemed to be on the verge of breaking into the league’s elite on regular basis.

Meanwhile, although still dangerous, the two-time Cup-champion Lightning clearly were on the downward side of the mountain after an amazing run, while the window continued to shut on old playoff standbys such as Pittsburgh, Washington and the New York Islanders. And yes, most of us thought that same window rapidly was slamming shut on Boston and Dallas, especially given the coaching upheaval that took place in both cities.

Of course, the Devils weren’t even in the preseason conversation, and there were concerns about a Vegas club that missed the playoffs for the first time in franchise history last year, fired yet another coach, had two unproven goaltenders and was banking on an enigmatic potential generational superstar who never had made the playoffs.

It was widely expected that the Bruins would stumble their way into another playoff spot, but that a rebuild was right around the corner. Sure, getting David Krejci back after a year’s sabbatical in Europe would help, but no one could have guessed how much of an impact he ultimately would have. And by Christmas, the team was likely to be at full strength with the return of all-star forward Brad Marchand and top-paring defenseman Charlie McAvoy from serious injuries.

Questions about depth and goaltending lingered, but the common thinking was the Bruins would hang around until the holidays before making a run when at full strength during the season’s second half.

Oh, they’ve hung around for sure, but they’re at the absolute top of the heap thanks to Linus Ullmark’s Vezina-level play in goal, superstar free-agent-to-be David Pastrnak’s red-hot start and newcomer Hampus Lindholm’s solid play on the blue line. Lindholm’s early performance and Krejci’s return meant that Marchand and McAvoy wouldn’t have to rush back, but not wanting to be left out of the party, those two returned earlier than expected and Boston appears to be a juggernaut.

Yet, the Atlantic Division-leading Bruins still can’t shake the up-and-coming Metro-leading Devils, who are riding the hot play of castoff netminders Vitek Vanecek, who was named the NHL’s second star of the month for November, and Mackenzie Blackwood. Vanecek took over for the injured Blackwood early in November, and after posting an 8-1-0 record, .930 save percentage and 2.13 goals-against average for the month looks to have claimed the No. 1 goaltender role until further notice.

New Jersey didn’t make much offseason noise, acquiring veterans Vanececk, Erik Haula, John Marino, Brendan Smith and Ondrej Palat to supplement their young, talented roster, with Palat only appearing in six games before suffering an injury. The improved play in goal and those few veteran additions have provided the structure and confidence the youngsters needed to be successful. During their 13-game winning streak, the Devils outscored their opponents 56-23 overall and 42-14 at even strength.

And no one is feeling sorry for Cassidy anymore as his Golden Knights have been buoyed by a coaching philosophy that prioritizes defense, the strong play of inexperienced goaltenders Logan Thompson and Adin Hill and the return to health of potential superstar Jack Eichel. At one point, Vegas netminders had a .941 combined save percentage, 14 points higher than any other team in the league, and Eichel, who appears to be having fun again, has 29 points in 26 games.

As he stood behind his bench nearly moved to tears, that unexpected show of appreciation probably provided the closure he needed. After that, he was able to turn his focus to the task at hand and kicking his former team’s butt.

“I appreciate it,” Cassidy told the media after the game. “It’s as simple as that. I appreciate it. I did what I could here to help the team win, and now it’s on to Vegas and doing what I can there … Once it starts, it’s business as usual. We had a gameplan in place. We did a good job sometimes. Other times we didn’t. We tried to execute a gameplan knowing what I know about them, then we got ourselves in penalty trouble and that goes out the window a little bit. I’m used to hearing Dirty Water at the end of the game, so I’m glad I didn’t hear it tonight.”

The way things are going, it looks like Cassidy might get six or seven more chances to send a message to his former boss before the 2022-23 season concludes next June. A Boston-Vegas Stanley Cup Finals showdown sure would be a fun way to end this NHL season of surprises.