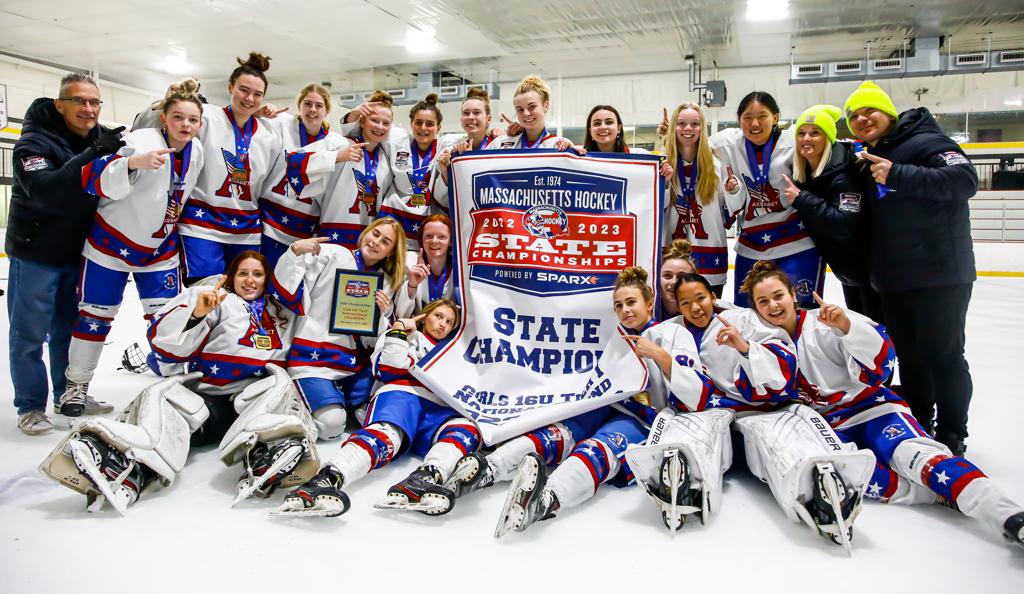 Massachusetts held its girls’ Tier 1 and Tier 2 state tournaments during Thanksgiving weekend, with four USA Hockey National Championship berths being claimed. Tier 1 and Tier 2 Nationals berths were earned in the 19U and 16U age groups at the New England Sports Center in Marlboro, Mass.

We chose two preliminary-round games from the Massachusetts State Tournament for our MHR/LiveBarn Games of the Week, and the recaps of those games are below. But first we wanted to congratulate the four Massachusetts girls’ teams that captured state titles and will be heading to Nationals in April:

Congratulations to all the winners and good luck in your high school and prep seasons as well as at Nationals in the spring!

CLICK HERE for scores, schedules and final standings from the Massachusetts State Tournament.

Our other two Games of the week were border battles in which American and Canadian teams squared off in the 2008 and 2011 boys’ age groups at the CCM Nations Cup in the Detroit area. Both games took place on Saturday, with the No. 4 USA Ashburn Xtreme facing the #21 Ontario Soo Jr Greyhounds in 2008 action and the USA No. 7 Tier 2 (65th overall) St. Claire Shores Saints taking on the No. 4 Ontario London Jr. Knights.

CLICK HERE for the schedule, results and final standings.

The Jr. Eagles won this preliminary-round contest in a thriller that featured overtime and ultimately was decided by a shootout. Both teams advanced to the semifinals, where they would battle again in another instant classic that Boston won by a 3-2 score and that also required overtime. The Jr. Eagles went on to capture the title with a 3-1 win against the ninth-ranked Bay State Breakers. In the first meeting between the Jr. Eagles and Warriors, Boston’s Ava Scannell turned aside all five Valley shootout attempts to lift her side to victory and make a hard-luck loser out of Jr. Warrior netminder Cara Kuczek. Lindsey Berlucchi beat Kuzcek on the Jr. Eagles’ third shot of the skills contest for the game-winner. Boston’s Ava Enright and Valley’s Alison Marsters exchanged goals during regulation time to set up the OT and shootout drama. Julia Krepelka proved to be the hero on the semifinal contest, netting the game-winner in extra time off of Enright’s assist. Enright scored with 5:15 left in the third period to send the game to overtime. Boston’s other goal by Luisa Ferrari, also assisted by Enright, tied the game at 1 with just five seconds left in the opening frame. Rowan Kennedy and Marsters scored for Valley. Scannell once again split time in goal with Arie Erlich and picked up the win for the Jr. Eagles. Berlucchi, Ferrari and Margaret Keyes scored in the championship-game win against the Breakers.

The Wizards rolled through their first four games of the Massachusetts State Tournament, including this victory, by going 4-0-0 without surrendering a goal. Including this win over the No. 11 North American Hockey Academy (Worcester Whitehawks), East Coast outscored those first four opponents, 24-0, to advance to the championship game before being upset by the No. 10 Boston Jr. Eagles, 3-1. In the win over NAHA, Alexsa Caron earned the shutout in goal, while four different players scored. Samantha Taber dished out a pair of assists as the only multiple-point scorer, with Emily Crovo, Ava Decoste, Deanna Buenzow and Charlotte Wensley each contributing a goal. Elisabeth Rourke scored in the opening three minutes of the second period in the championship game, with Katherine Kang picking up the assist, as the Wizards had a 1-0 lead before the Jr. Eagles rallied for the game’s last three goals. Whitney Dacko, Elizabeth Greeley and Livia Brooks scored for Boston to make a winner out of goalie Bailey Callaway, who outdueled Caron in net. The Jr. Eagles went 5-0-0 on the weekend and outscored their opponents, 27-4, in capturing the state title.

These two teams would meet twice at the Nations Cup near Detroit, with Ashburn earning a 4-0 victory in our Game of the Week and Soo enacting some revenge by knocking off the Xtreme, 2-1, during Sunday’s final round of games. That victory wasn’t enough to lift Canada to the overall points championship in the 2008 Division, though, as USA teams finished five standings points ahead of the Canadian clubs in the final round (25-20) despite going 4-5-0 in Sunday’s contests. Ashburn went 3-1-1 at the tournament, heading back to Virginia with an impressive 33-2-1 record and holding a 194-39 scoring advantage over its opponents. The Greyhounds finished 3-2-0 in Detroit and are now 13-10-0. They have outscored their opponents, 64-36, this season.

This thriller proved to be one of three London victories at the Nations Cup Detroit as the Knights ended up going 3-2-0 on the weekend, with the losses coming against the USA No. 64 Lake County Vipers by a 2-1 score on the final day and by a 3-1 margin vs. the “Upper A” Ashburn Xtreme. St. Claire Shores went 3-1-1, with the tie coming against the Ontario No. 5 “A” Centre Wellington Fusion. The Saints are now 14-4-2 on the season and have outscored their opponents, 105-43. London is 16-4-2 and holds a 89-40 scoring advantage over its foes. The USA teams won the 2011 Nations Cup, rolling to a 71-7 points advantage during Sunday’s final round of games and posting an 11-1-0 record on the day.