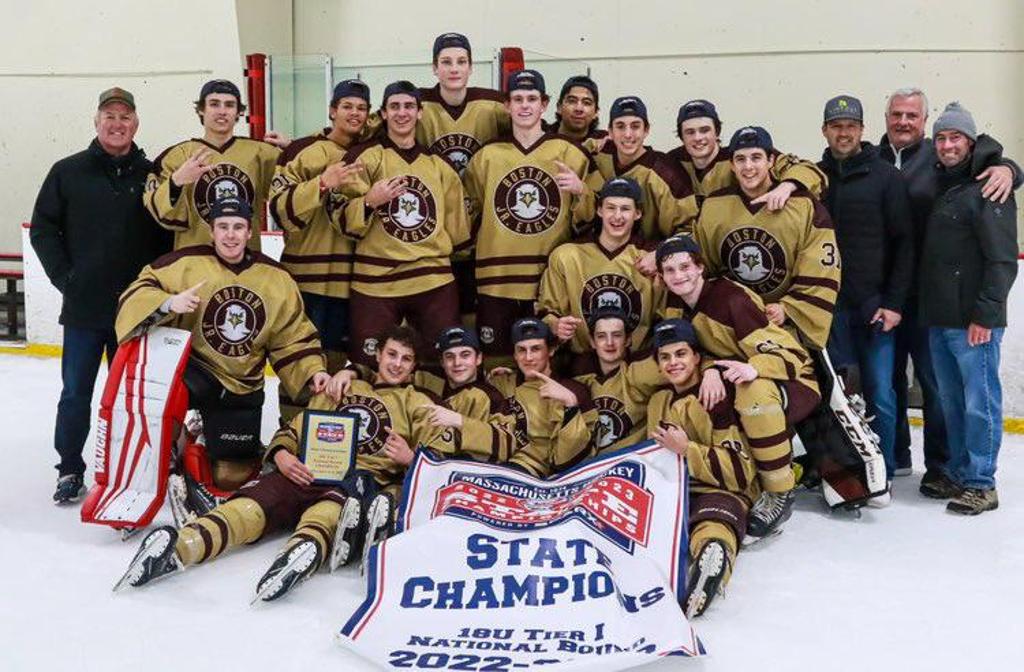 For one of our MHR/LiveBarn Week 8 Games of the Week we zeroed in on Massachusetts, which is home to many split-season teams because so many of the state’s players also play for their local high schools or for prep schools starting in late November.

In areas of the United States where high school hockey is strongest and split-season teams proliferate the club-hockey scene, state tournaments are held before the school seasons start to determine which teams will represent those areas at USA Hockey Nationals in April.

Massachusetts crowned boys 15U, 16U and 18U Tier 1 champions as well as its boys 16U and 18U Tier 2 champions, with the girls’ state tourneys scheduled for Nov. 25-27. The following teams earned state titles and USA Hockey National Championship berths:

We recap the boys 18U Massachusetts Tier 1 championship game below. All games can be watched on-demand on LiveBarn.

Our other boys Game of the Week also was a 18U Tier 1 matchup from the Prep Hockey Conference Showcase hosted by Mount St. Charles in Rhode Island last weekend. The Prep Hockey Conference includes some of the top school-affiliated teams in the United States and Canada. Our featured matchup pitted Canada’s top-ranked Independent Prep team, St. Andrews College, against the USA’s second-ranked 18U Tier 1 National Bound team from Mount St. Charles. MSC skated away with a 7-4 victory.

CLICK HERE for all of the PHC Showcase results.

We stayed in Massachusetts for one of our girls Games of the Week as the National Girls Hockey League held its Fall Classic Futures Showcase for 10U and 12U teams in Tewksbury, Mass. Our featured matchup was a crossover 12U Tier 1 vs. Tier 2 contest on Day 1 of the tournament Friday. Also available on LiveBarn, our Game of the Week from the NGHL had the Tier 2 No. 6 Worcester Jr. Crusaders falling to Tier 1 No. 37 Boston Advantage, 1-0.

Our final Game of the Week was a battle of top-14 USA Girls 14U Tier 2 teams from the CCM Girls World Invite Detroit, which was held from Friday through Sunday. Our highlighted game featured the No. 12 Chicago Hawks facing off against the No. 14 Lake City Whitecaps from Wisconsin on Saturday. The Hawks knocked off the Whitecaps, 5-2, and moved up to No. 10 in this week’s rankings.

A big Tier 1 vs. Tier 2 USA Girls 12U Red Division matchup was one of the highlights of Day 1 at the NGHL Fall Classic Futures Showcase in Massachusetts, and the Advantage held off the Jr. Crusaders for a hard-fought 1-0 victory. Caroline Allen’s unassisted first-period tally proved to be the difference in the game as Vienna Noble earned the shutout win in goal for Boston. Lucy Decaire was the hard-luck loser in net for Worcester. The Advantage went on to post a 4-0-0 record in the tournament, beating the No. 39 Vermont Glades twice in a row to earn the championship and move up to No. 34 in the Tier 1 rankings. They won the first matchup, 2-1, before skating to a 3-2 shootout win in the finals. Noble stopped two of three Vermont shots in the shootout to again pick up the win. Makenna Pratt and Sadie Lizotte scored for Boston in the title game. The Advantage now are 9-6-0 on the season. Worcester went 1-3-0 at the showcase and is 21-5-0 on the year.

One of the top USA Tier 2 matchups of the CCM Girls World Invite Detroit was played Saturday in suburban Detroit, with the Hawks rolling to a 5-2 victory over the Whitecaps. Chicago posted a 5-1-0 record at the tournament, falling to the second-ranked East Coast Wizards, 5-3, in the championship game to leave Detroit at 18-2-2 overall and holding a 90-24 scoring advantage against all opponents. They moved up to No. 10 in the nation thanks to their strong showing. In addition to the victory against Lake City, the Hawks beat No. 28 St. Claire Shores and No. 22 Belle Tire. The Whitecaps went 2-1-1 in Detroit and are 7-3-2 overall this year. They tied No. 28 St. Claire Shores, 2-2, and beat the No. 76 Nashville Jr. Predators at the tournament.

In one of the year’s top matchups of highly ranked North American prep-affiliated programs, Canada’s top-ranked Independent Prep St. Andrews College faced off against USA No. 2 Tier 1 Mount St. Charles in a Prep Hockey Conference showdown Saturday in Rhode Island. MSC pumped home seven goals in an 11-game scoring fest to earn the 7-4 victory. Five different Mount St. Charles players dented the twine. The offense was paced by Hunter Bruce, who recorded a hat trick, and Samuel Carosello, who dished out three assists. Daniel Prazma was the only other MSC player to record multiple points, finishing with two helpers. Other Mount goal-scorers included Blake Montgomery, Christian Venticinque, Nick Metelkin and Chase Pirtle. Cody Butikis stopped 41 St. Andrews shot to pick up the win in goal. Four different players scored goals for St. Andrews: Jack Pridham, Rory Gilmour, Connor Arsenault and Deal Letorneau. Jack Good was the only St. Andrews player to record multiple points, handing out a pair of assists. MSC finished the showcase 2-1-0, falling to Culver Academy, which moved up to No. 3 in the nation after a strong 3-0-0 showing in Rhode Island. St. Andrews was 1-2-0, with the other loss coming against USA No. 9 overall South Kent and the victory coming vs. USA No. 22 overall Northwood School. Mount St. Charles is now 16-4-2 on the season, while St. Andrews is 8-6-0.

The 11th-ranked Boston Jr. Eagles capped off the Massachusetts 18U Tier 1 State Tournament with a 3-2 victory against the 25th-ranked Whalers to capture the title and earn a trip to USA Hockey Nationals. The Jr. Eagles rolled through the tourney with a 3-0-0 record, while the Whalers suffered their only loss in the title game. Boston defeated the No. 42 Boston Little Bruins and No. 18 East Coast Wizards en route to the championship to conclude their split-season slate 18-6-1 and move into the MHR Top 10 at No. 9. Cape Cod dropped to 9-15-3 with the loss after playing in four one-goal games, one of which was a 3-2 upset of the No. 6 Central Mass. Penguins, who dropped out of the top 10 with that setback. The Whalers also beat the No. 21 Valley Jr. Warriors. In the championship tilt, the Eagles’ game-winner came off the stick of Cullen Emery with 8:17 left the third period and made a winner out of goalie Paul Dalessio, who will make a return to Nationals after winning a national championship while a member of the 16U Bishop Kearney Selects last season. John Harney and Brock Cummings also scored for the Eagles, while Ryan Teehan and Ben Buckley tallied for Cape Cod. Marco Beshere and Jake McManus dished out a pair of assists for Boston, with Jackson Faughan, R. Henry Cohen and Shane Taddia each recording a single helper for the Whalers.