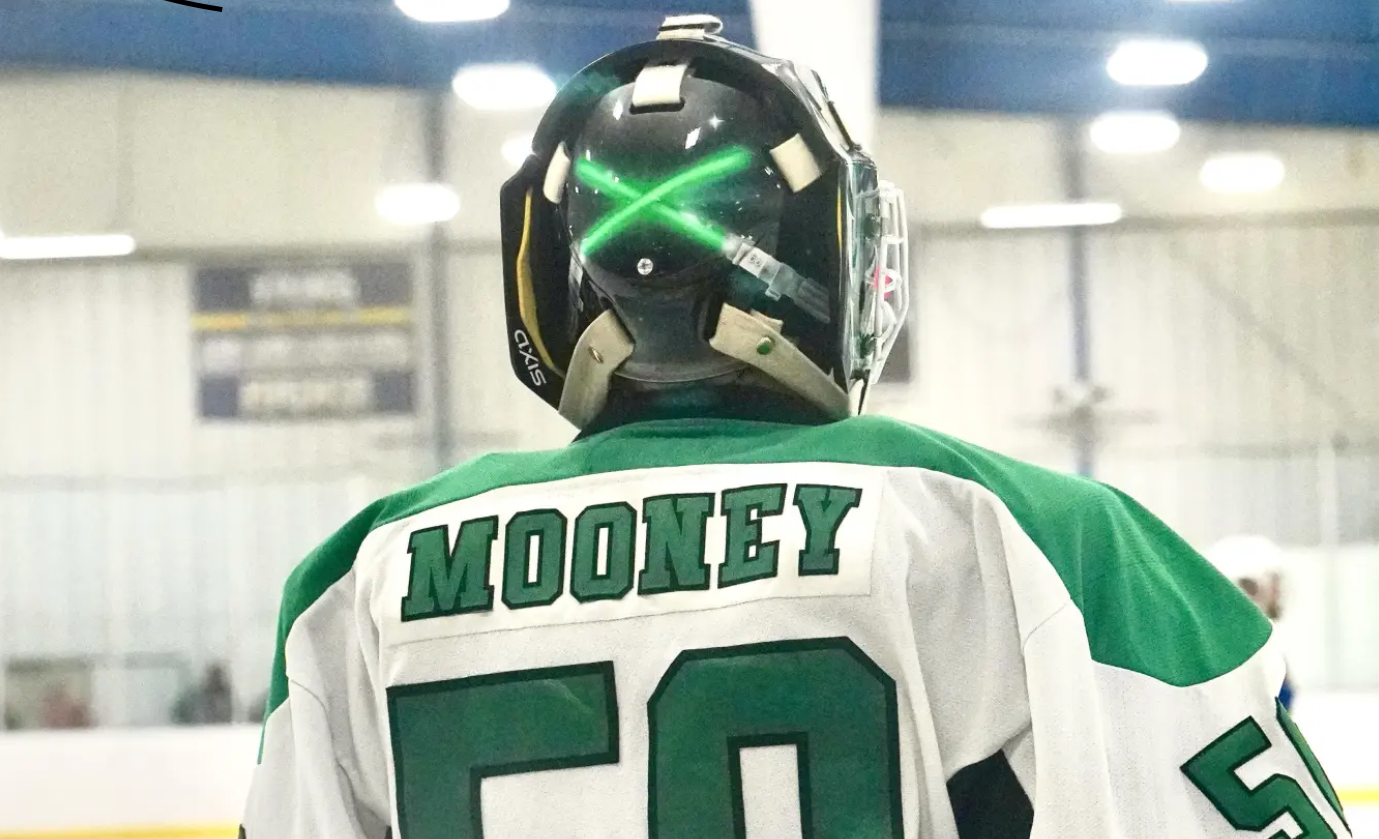 It's the Stories Behind the Story That Make October Saves Special

The emergence of October Saves, which allows goalies at all levels from around North America to raise money for the fight against cancer simply by doing their jobs and stopping pucks, as a fundraising organization that routinely generates more than $500,000 in donations is a great story all by itself.

But it’s the stories behind the story that really make the program special.

As final donations are counted and added to this year’s total, goalies have raised more than $610,000 toward the ongoing fight against a terrible disease that has impacted almost everyone in some way. The amount raised is approaching last year’s record total of more than $620,000 and brings the total amount raised since the organization received full non-profit status in 2017 to nearly $3 million.

Funds raised will be funneled directly to established programs in the United States such as The Dana Farber Institute’s Jimmy Fund in New England, the Inova Schar Cancer Institute in Virginia, Children’s Hospital of Philadelphia and Stand up to Cancer. October Saves also partners with Children’s Hospital of Eastern Ontario, which passes along funds to reputable organizations all over the country.

The amazing story of the program’s growth from 28 participating goalies who played for the same Northern Virginia youth hockey club and raised $32,000 in 2014 to an entity that should exceed $3 million in overall donations in 2023 is heartwarming and speaks to the power of the North American hockey community. But even that pales in comparison to some of the stories that drive the top fundraisers each year.

One of the memorable stories from last year was that of Keegan Groom, a goalie for Nassau County Lions 16U and the Wantagh/Seaford/Plainedge high-school program in New York. Keegan’s mom, Kelly, was a longtime October Saves volunteer who battled cancer several times before passing away during the 2021 fundraising campaign. Keegan and his family continued to raise money in her honor after her passing, and he wound up raising more than $20,000 and was the top overall fundraiser.

“It was a very emotional and special experience to work with this sweet family and see how they channeled their grief into something Kelly really believed in,” October Saves Founder Lara Hopewell said.

Then there are Traci and Ike Cole.

Traci has fought and beaten both breast and colon cancer. She finished up her colon-cancer treatments just prior to the launch of October Saves in 2021. Ike, who played for the Ashburn Xtreme in Virginia at the time, raised more than $15,000 in honor of his mom.

This year, playing for the Potomac Patriots, 12-year-old Ike picked up right where he left off in 2021. He recorded 186 saves in October and generated $21,526 in donations to finish as the top overall fundraiser.

“Every single shot he stops is raising money to help cancer awareness and to find that cure, so the next person doesn’t have to go through what I went through, twice now," Traci told ABC Channel 7 News in Washington, D.C. last year. “And I’m very proud of him, and I’m just so happy that he does this and did it for me.”

With more than 1,000 participating goalies, there are countless stories just like these shared by the participants and their families.

“They are doing this for their moms, their grandmoms, in honor of family members, in honor of kids they may know who are fighting cancer," Hopewell told ABC 7.

You don’t have to scroll down very far on this year’s October Saves website to see the inspiration behind the top fundraisers.

Daniel Mooney, a varsity goalie for the Pine-Richland High School ice and inline hockey teams in Gibsonia, Pa., placed third overall with more than $20,000 raised. Daniel is a leukemia survivor who was diagnosed at age 19 months and received radiation and chemotherapy treatments for more than three years.

He explains his motivation on his individual October Saves profile page.

“I am one of the lucky ones,” Daniel wrote. “Some of the kids we met at the hospital were not so lucky. I want to do everything I can to raise money for cancer research so that more people can beat this awful disease.”

Daniel, who has loved hockey as long as he can remember, initially wasn’t able to be as active as most kids because of his cancer treatments. He took a chemotherapy drug called vincristine, which affected his nerves in muscles and contributed to his having difficulty walking and experiencing a loss of coordination. Daniel also needed radiation because there was spinal fluid around his brain.

“At the time, the doctors were not sure exactly how the radiation would affect me in school and in the future,” he recalls on his profile page. “But I needed it to save my life. So, I spent the next three years getting shots and spinal taps and taking chemotherapy and getting my brain radiated.”

As his treatments were winding down, Daniel started playing hockey in the driveway with his older brother. Since running was a struggle, he stood in front of the net trying to keep pucks from getting past him.

“Pretty soon, other neighborhood kids joined our game,” Daniel writes. “Stopping the puck and being the guy in the net soon became a part of me.  I wanted to play more than just driveway hockey. I wanted to play on a team.”

Of course, ongoing treatments made it difficult for Daniel to skate. When he went to the rink with his parents, he struggled to keep his balance and became frustrated.

“But I knew if I wanted to play on a hockey team, I had to learn to skate,” he continues. “I made up my mind that I was going to do it, no matter how hard it seemed. Even though it wasn’t pretty, I never gave up on my goal.  I fell a lot, but I picked myself up and kept trying.”

The hard worked paid off. As his muscles became accustomed to the movements necessary for him to skate well enough to play and his legs got stronger, Daniel’s skating smoothed out and his balance improved.

Today, after all that hard work, he still stands in front of the net doing what he does best and loves most, but he does it on skates for his varsity high school teams. And he works tirelessly to help make sure others don’t have to endure the struggles he faced.

“I have turned my love of hockey into a way to give back to cancer research,” he writes. “This organization's mission is very important to me, and I'm proud to help them make a difference.”

It’s young people like Daniel, Ike and Keegan who really are making a difference. And so is 13-year-old Raffi Podniesinski of the Islanders Hockey Club in Tyngsboro, Mass.

Raffi finished fourth in money raised this year, bringing in more than $9,000. He raised money in honor of his grandmother (“MeMa”), who was battling cancer and recently passed away on Oct. 26. “She was the greatest storyteller I have ever known, and I will love her the rest of my life,” he writes on his October Saves profile page.

Raffi’s teammates supported his efforts. They placed a ribbon decal with her name on it on their helmets, and his goalie partner honored her memory in the first game after her passing.

“Hockey is family and I understand that now more than ever,” Raffi writes in a final update. “Thank you to everyone that has donated and supported this fundraising campaign.”

Raffi plans on continuing to raise money in memory of “MeMa” and a local girl named Izzy who is fighting leukemia.

Kyle Arzdt, who plays for the Enfield Eagles in Connecticut, also lost his grandmother (“MeMe”) to pancreatic cancer when he was very young. His friend Cathy beat breast cancer and also inspired him as did the loss of his friend Jeff.

The No. 7 overall fundraiser, Ryan Ward, is 11 and plays for the North Shore Shamrocks in Massachusetts. Ryan raised almost $6,400 this year. His dad battled esophageal cancer, and two grandparents also suffered with different forms of the disease.

“I want to do everything I can to help raise money to fight cancer and give every patient and their families the resources they need,” his profile reads. “As you probably already know, I love hockey and especially being a goalie. This year I’m using my love for this sport and position to help support this organization.”

The sentiments are the same north of the border.

Jacen Craig, a 12-year-old goalie for the Mississauga Rattlers and Canada’s top fundraiser writes, “My dad is now 100% CANCER FREE – I want other people to be able to say that!”

No. 4 Canadian fundraiser Benjamin Grant of the U14 Kanata Blazers participated in honor of his grandfather, who was taken by leukemia, and his sister, who was a patient at Children’s Hospital of Eastern Ontario.

“I want to participate to help people who need help, and I will do my part by stopping pucks!” he writes.

No matter the motivation or inspiration, when it comes to October Saves and other similar non-profit organizations, every dollar truly does count.

The North American hockey community remains undefeated when it comes to supporting other hockey families and rallying behind great causes. That streak continues and we continue to move closer toward hopefully finding a cure for this deadly disease.

Here’s hoping that the efforts of these amazing goalies and all the others who participate in October Saves each year will one day pay off. That would be the greatest hockey victory of all.