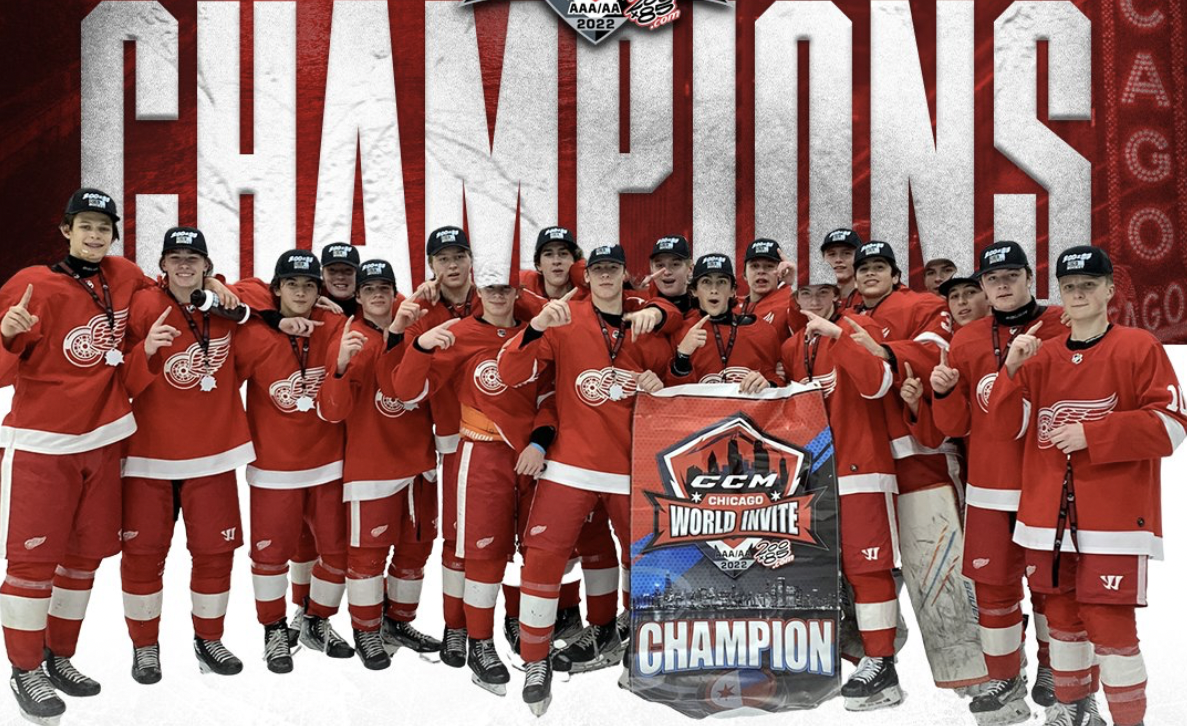 Two of our LiveBarn/MYHockey Rankings Week 7 Games of the Week last weekend came from the CCM World Invite Chicago, while our other two contests were matchups of highly ranked girls’ teams from the Roc City Girls Fest in Rochester, N.Y.

The CCM World Invite welcomed more than 500 boys’ teams and 12,000-plus players at the AAA and AA levels across nine age groups from 2013 birthyears through 18U. Held at rinks all over the Chicago area, the tournament featured more than 1,200 games between Friday and Sunday.

Our two Week 7 LiveBarn featured contests from that event included a matchup of Ontario and USA top-three 2010 teams and a showdown between a pair of top-four USA 15U teams.

The first contest, which pitted Ontario’s second-ranked Sun County Panthers against the USA’s third-ranked Chicago Mission, was part of the tournament’s 2010 SuperTacks Crosby Division, which included the teams listed below (with their tournament records):

The Chicago Reapers went unbeaten in six tournament games and captured the division championship with a 5-3 victory on Sunday while the two teams who competed in our Game of the Week bowed out in the semifinals.

Our second Week 7 World Invite matchup was from the 15U SuperTacks Crosby Division and was between No. 1 Little Caesars and the fourth-ranked Los Angeles Jr. Kings. The following teams, listed with their tournament records, competed in that division:

Every team except one suffered at least one loss in this evenly matched group, with our MHR top-two USA 15U teams facing off in an epic championship tilt that resulted in top-ranked Little Caesars skating to a 5-4 victory to take home the hardware. The Jr. Kings, our other Game of the Week participant, faced the Mission in the quarterfinals, falling in a hard-fought 3-2 decision.

This week’s two featured girls’ showdowns included Tier 1 and Tier 2 battles from upstate New York. We had a matchup of USA top-10 teams in the 12U Tier 1 Division as well as a battle between USA top-11 clubs in the 16U Tier 2 Division of the Roc City Girls Fest. The 12U contest saw the No. 8 Charles River Blazers take on the 10th-ranked Pittsburgh Penguins Elite, while the 16U game had the ninth-ranked Glenview Stars playing against the No. 11 Adirondack Northstars.

The Roc City Girls Fest had more than 125 teams competing in five different age groups from 10U through 19U.

Here are the recaps of this week’s Games of the Week:

A border battle between top-three Ontario and USA 2010 teams was one of the highlights of Day 2 at the CCM World Invite. Sun County entered the tournament with a sparkling 17-1-0 record and having compiled an 87-26 scoring advantage against its opponents before posting a 3-1-1 record in Chicago. The Panthers beat USA No. 23 Top Gun (3-1), No. 20 Florida Alliance (4-1) and No. 14 Fox Motors (4-2). Sun County skated to a 2-2 tie with the third-ranked Mission in our featured game and ultimately fell to the fifth-ranked Chicago Fury, 5-2 in the semifinals to head home with a 20-2-1 overall record and holding a 102-37 scoring advantage over its opponents for the season. Chicago also saw its tournament run end in the semifinals after posting a 3-1-1 record. The Mission lost to the eventual-champions and No. 8 Chicago Reapers, 2-1, in overtime in the semis after entering the tournament with a 19-6-3 mark. They beat Florida Alliance, 4-2 and 4-3 and Top Gun, 3-1, and are now 22-7-4 on the year.

The Illinois-based stars jumped out to a 3-0 lead in the opening period and cruised to a 6-1 victory against Adirondack on the way to posting a 5-1-0 tournament record and capturing the championship. Glenview poured it on in the second frame, with two of the team’s three goals that period coming off the stick of Claire Nicgorski. She also assisted on Francesca Varallo’s second-period tally to finish tied for the team high with three points. Abigail Schrantz scored once and handed out a pair of helpers for the Stars in the opening period, with Paige Purcell and Camryn Hanson also scoring. Casey Stockbridge made 14 saves to earn the win in net for Glenview, allowing the only goal to Lindsey Malek late in the first period. Molly Schulman assisted on the lone Northstars’ tally. The Stars went on to win three more games at the tournament and beat the No. 22 Webster Cyclones, 2-1, in the championship game to finish Girls Fest with a 19-1-4 overall record.

After a scoreless first period, Pens Elite tallied twice in the middle frame and then held off a late rally by the Blazers to earn a hard-fought 2-1 victory. Layla Pegnato and Mia Grasser scored just over a minute apart in the second period to stake Pittsburgh to the two-gal advantage, but Lydia Kealty’s power-play goal with 3 minutes left in the third period made things interesting in a clean game that featured only one penalty. Brelyn Smith outdueled Anna Donovan between the pipes to earn the victory. Two of the three goals were unassisted, with the only helper going to Grace Keisel on Grasser’s goal for Pens Elite. Pittsburgh went on to drop a 2-1 decision in the semifinals against the second-ranked Windy City Storm, which advanced to the championship game and knocked off the Blazers, 2-0, to capture the title. Charles River upset the top-ranked East Coast Wizards, 3-2, in the semifinals and went 4-2-0 in the tournament to head home with an overall record of 9-9-1. Pens Elite went 4-1-0 at Girls Fest and is 20-5-0 on the year.