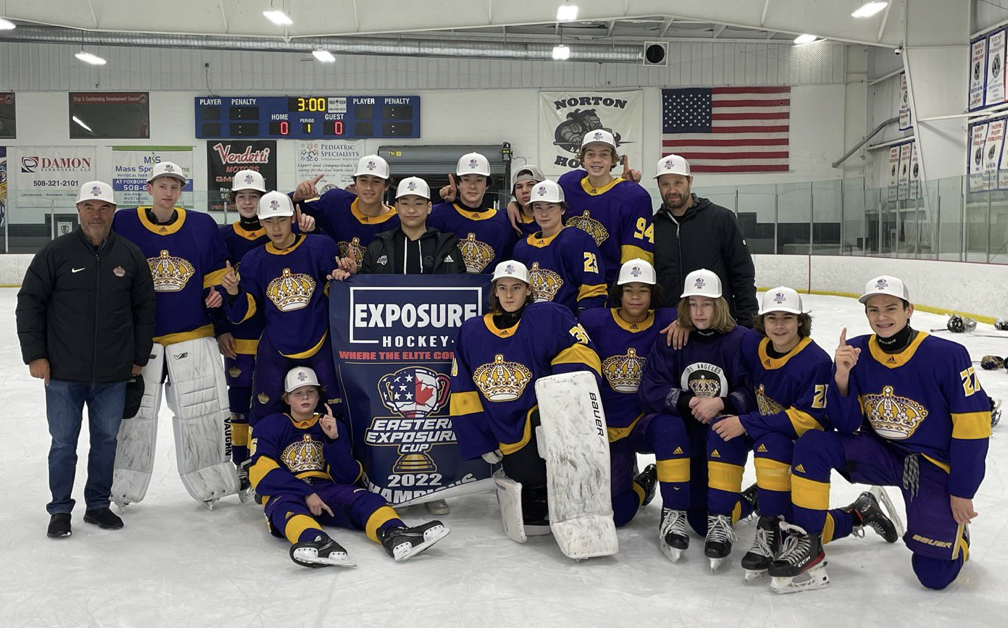 For our Week 6 Games of the Week, we highlighted two games from the Eastern Exposure Cup, an event that featured more than 125 teams representing many of the top youth minor and hockey associations in the United States and Canada.

Our two LiveBarn Featured Games of the Week were from the Exposure Cup in the 2008 and 2011 boys ranking categories, and we also are teaming up with LiveBarn to bring you video highlights of a bonus game from that tournament in which the then-No. 19 Los Angles Jr. Kings upset the No. 2 Mid-Fairfield Jr. Rangers, 5-4, in the semifinals, a result that would help propel the Jr. Kings to No. 12 in our rankings.

The fifth-ranked Los Angeles Jr. Kings posted a 5-0-0 record in the 2008 Blue Division to take home the championship hardware, improve to 20-2-0 overall and move from fifth to fourth in the rankings. In the 2011 Blue Division, 10th-ranked Dallas Stars Elite went 4-2-0 but managed to battle their way to the finals and ultimately capture the championship with a 3-1 title-game victory against the No. 19 Jr. Kings.

The Jr. Kings rallied for two third-period goals, getting the game-winner from Masashi Herrmann with 44 seconds left in regulation, to upset the Jr. Rangers and advance to the 2011 Blue Division title game at the Eastern Exposure Cup. Logan Dulac assisted on the deciding tally, which was made possible when Henry Thomason set up Mark Makarov, who tied the game with 13:06 left. Jackson Liao’s unassisted goal with 31 seconds remaining in the second period had put Mid-Fairfield up, 4-3, and seemingly gave them the momentum heading into the final frame. Liao also scored with 6:10 left in the second period, the final tally of a three-goal Jr. Ranger run that put them in front 3-1. Charlie Sevaro and Braden Haggerty scored as part of that three-goal, second period outburst after Brady Trost and Andrew Meyers had staked Los Angeles to a 2-0 lead. Trost netted two goals in the game, with Thomason adding a pair of assists. Mikey Zavaleta II earned the victory in goal.

CLICK HERE for video highlights once they are posted

The following teams competed in 2008 and 2011 Blue divisions of The Exposure Cup (last week’s rankings and their tournament records included):

We also traveled north of the border to the London Jr. Knights Fall Classic for another one of our Games of the Week. The Fall Classic featured 50 Ontario boys’ AA teams competing in the U16, 2009 and 2008 age groups.

And our final stop for Week 6 was in Michigan for a 2 Nations College Prep Series Showcase contest. This event includes more than 60 top girls’ teams in the from the United States and Canada competing in the 12U, U13, 14U, U15, 16U, U18, 19U and U22 age groups from Friday through Sunday.

Here are this week’s recaps

Windy City scored three-straight second-period goals, with Nathan Hauad’s tally turning out to be the game-winner, in this battle of top-15 USA and Ontario 2008 teams. Caden Dabrowski scored twice in a span of 2:27 to finish off that run and leave the Storm in control of the game entering what would be a scoreless final period. Ashton Drozo and Jack Hextall also scored for Windy City, which went on to post a 3-1-1 record at the Exposure Cup. Haud finished with a goal and an assist, picking up his second helper on Dabrowski’s second goal. ThomasVandenberg and Xavier Tessier scored for Myers AAA. Jack Zilewicz earned the victory in goal for Windy City over Myers’ Matthias D’Souza.

Mid-Fairfield skated to a surprisingly lopsided six-goal victory in this battle of top-six teams at the Exposure Cup. The Jr. Rangers would win four-straight games at the tournament before being upset by the No. 19 Los Angeles Jr. Kings in the semifinals. PHC went 3-2-0 on the weekend. The game was tied at 2 after the first period before the Jr. Rangers exploded for five second-period tallies to take control with a 7-2 lead heading into the final frame. Nine different Jr. Rangers recorded at least one point in the game, with four of them notching multiple points. Jackson Liao’s hat trick paced the attack, with Peter Lyden adding a goal and two assists while Lucas Sposito and Charlie Sevaro each contributed a goal and an assist. Additional Mid-Fairfield goal-scorers included William Scioletti, Julian Chiweshe and Ford Fairback. Henry Gilbert earned the victory in goal for the Jr. Rangers. Jason Pukhov scored twice for PHC, with Thomas McNelis adding the third goal.

Todd King’s power-play goal with 2:23 left in the third period proved to be the difference in this minor upset at the London Jr. Knights Fall Classic in Ontario. Whitby trailed, 2-1, midway through the game before Nolan Buie tied the game at 2 with 8:12 remaining in the second period. King and Cooper Burns picked up assists on that goal after Brady McIntosh and Evan Gracey had scored for London to overcome an early 1-0 deficit and put the Jr. Knights in front with 14:05 to play in the second period. Buie opened the scoring with his first of two tallies early in the first period. Blake Houston outdueled Cameron Bourdeau in goal to earn the victory.

Team Illinois 14U knocked off Durham West U15 en route to 4-1 record at the 2 Nations College Prep Series Showcase in Michigan. TI rallied to record four-consecutive wins after falling to USA 14U No. 14 Little Caesar’s, 4-2, to open the weekend. Team Illinois earned victories against Ontario’s 26th- and 15th-ranked U15 teams, the Thunder Bay Queens and Markham-Stouffville Stars, respectively, in addition to beating the No. 3 Lightning. TI also beat USA’s 14U No. 43 San Jose Jr. Sharks. Team Illinois is now 16-6-0 on the season and has outscored its opponents, 75-35. Durham West went 3-2 in Michigan, with the other setback coming against the USA’s eighth-ranked 14U Chicago Mission. The Lightning beat the Queens, Sharks and Little Caesar’s to improve to 11-5-4 on the season. They have outscored their opponents, 60-25.