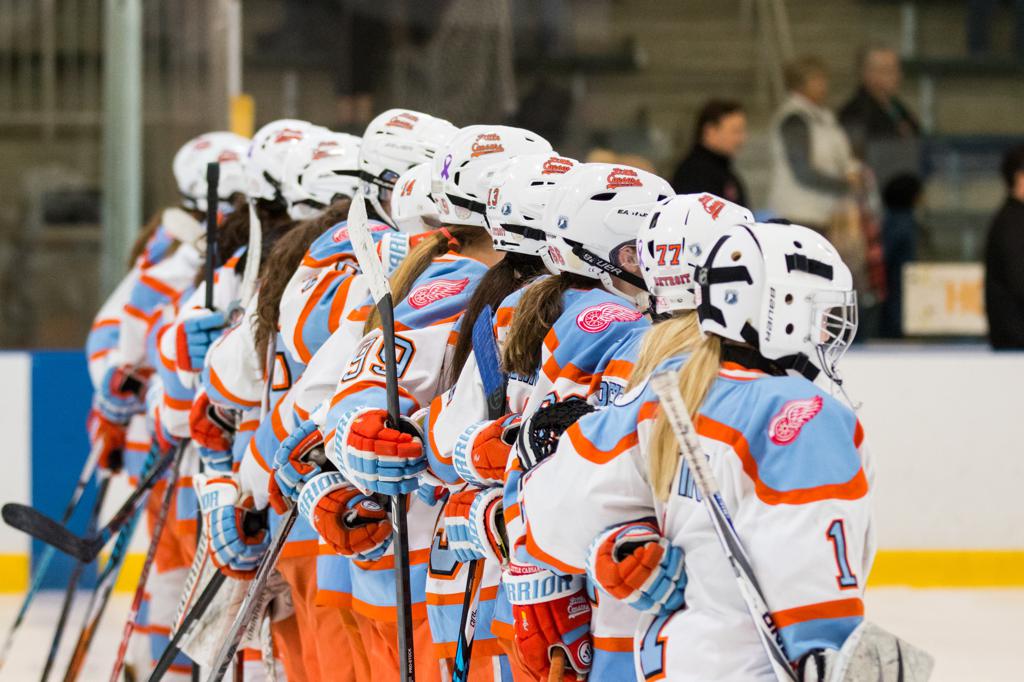 The MHR Week 5 Games of the Week brought us great matchups from some of the fall’s biggest North American Tournaments, including the Minnesota Tradition NIT for the girls and the CCM World Invite Motown on the boys’ side. In addition, we had an early-season showcase matchup from one of the most-respected Tier 1 boys’ hockey leagues in the United States, the Tier 1 Elite Hockey League.

The Tradition NIT included more than 80 teams of players between the ages of 16 and 19 representing most of the top girls’ youth and minor hockey programs from all over North America.

CLICK HERE for all of the Tradition NIT matchups and results. Games began on Friday morning and ran through the weekend until Monday. The tournament was held at the Schwan Super Rinks at the National Sports Center in Blane, Minn. All of the games were available for viewing via webstream at MNHockeyTV.

The Tier 1 Elite Hockey League Showcase was held near Columbus, Ohio, and the CCM World Invite Motown, which featured Tier 1 and Tier 2 teams from Canada and the U.S. competing over nine age groups, took place at rinks near Detroit.

Here are this week’s Games of the Week recaps:

In a top-five girls’ 16U showdown at the NIT, Little Caesars and Pens Elite skated to a 2-2 tie. Little Caesars sprinted to a 2-0 first-period lead before Pittsburgh responded with single goals in the second and third periods. Shayna Parry tied the game with 2:25 left in regulation and the Pens Elite goalie pulled for an extra skater, a goal that was set up by Neely Hawn. Mya Kearns had cut the margin to 2-1 in the second, with Zoey Crock picking up the helper. Emily Mitchell and Addison Spitz scored for LC in the opening frame off assists from Maeve Casey and Paige Cline. LC turned in a strong showing at the NIT, posting a 4-0-1 record that included victories against No. 7 Minnesota Elite Hardware and the No. 14 Jr. Flyers, to improve to 11-4-1 on the season. They have outscored their opponents, 71-34, to date. It was a tough tournament for Pens Elite, which went 0-3-1 and is now 10-7-1 on the year. Pittsburgh lost to No. 3 Shattuck-St. Mary’s, No. 19 North American Hockey Academy and No. 6 Minnesota Northern Elite.

A battle of top-eight USA 19U teams highlighted the second day of the 19U Blue Division at the NIT, but it was all Minnesota Elite Empowers in this 4-0 shutout win. Alexa Hanrahan, Caroline Sajevic, Grace Delmonico and Isabelle Goettl scored for Empowers, with Delmonico also adding an assist. Umalena Corniea and Hailey Hansen split time in goal for Empowers, with Corniea picking up the win. Shira Wein was in goal for the Mission. Minnesota, scored twice in the first period before adding single tallies in the second and third. Empowers was 3-1-1 at the NIT, falling to the No. 7 Jr. Flyers, 3-1, and tying Canada’s 22nd-ranked U22 Delta Hockey Academy, 2-2. They are now 15-8-2 for the season and have outscored their opponents, 77-52. The Mission went 2-2 at the NIT and are 13-6-0 overall on the year. They have outscored their foes, 66-41. Chicago’s other loss was vs. Canada No. 4 U22 Rink Hockey Academy Kelowna, and the Mission knocked off Canada’s Nos. 15 and 23 U22 teams.

This T1EHL matchup of USA top-20 clubs went down to the wire, with the Jr. Predators tying it up on the power play with 3:16 remaining in the third period before Owen Tylec potted the game-winner 1:26 into overtime to lift the No. 4 Jr. Sabres to the 4-3 victory. Nikolas Young picked up one assist, his third of the game, with Brady Zugec also adding a helper on the GWG. Zugec scored Buffalo’s first goal of the game in the opening frame, with Cullen Hurley and Alex Strachan also tallying. Zugec, Hurley and Strachan each finished with a goal and an assist to make a winner of goalie Aiden McKenna, who finished with 25 saves. Calvin Gardner and Damon Moss combined to make 28 saves for the Preds. Nashville got goals from Jonathan Pylpuik, Reuben Clark and Gordon Guerrero, with Luke Goulker and Zach Howard each dishing out a pair of assists. Buffalo posted a 3-1-0 record at the Columbus event, with the only loss being a 5-3 setback vs. the No. 63 Chicago Fury and two of the wins needing extra time. The Preds suffered a pair of OT losses and recorded a shootout win at the showcase. Buffalo is now 15-5-0 on the year, having outscored its opponents, 82-36. Nashville is 14-6-0 and holds a 100-51 scoring edge over its foes.

The Reapers turned a dominant performance is this cross-border battle on the way to a 6-1-0 CCM Invite record, which earned them a trip to the championship game. Chicago fell to Ontario’s second-ranked Toronto Jr. Canadiens, 4-3 in a shootout, in an exciting title matchup. The Jr. Canadiens posted a 6-0-0 record in earning the championship hardware to improve to 20-1-1 on the year. They have now outscored the opposition, 117-35. The Reapers dropped to 20-2-1 on the season with the championship-game loss and hold a 126-42 scoring advantage over their opponents. Chicago knocked off the Nos. 15 and 26 USA ’11 teams as well as the 14th- and 43rd-ranked teams from Ontario. York Simcoe went 1-1-2 at the tournament and is now 9-6-1 for the season. The Express tied USA No. 26 Victory Honda, 2-2, and beat USA’s 31st-ranked Chicago Fury, 4-0. Chicago also beat USA’s No. 6 Oakland Jr. Grizzlies, 4-3), and the 22nd-ranked California Goldrush, 5-3 en route the championship game. The Goldrush, a AA team, were the top story of the tournament as they knocked off the AAA and third-ranked Florida Alliance, 9-1, before falling to the Reapers in the semifinals.