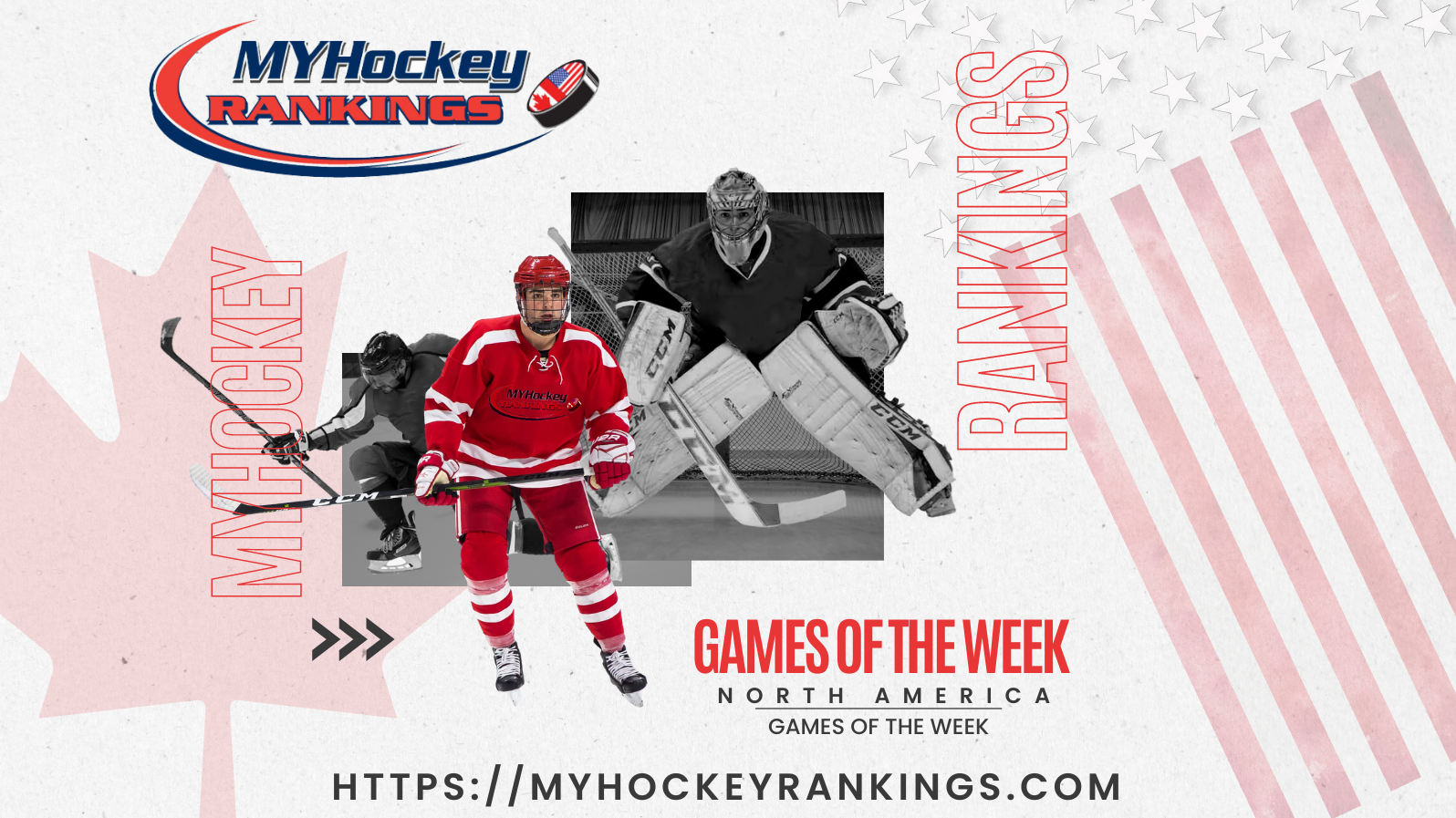 MHR Week 5 Games of the Week

Another huge girls’ hockey showcase highlights our Week 5 Games of the Week as we head out to hockey-hotbed Minnesota for a pair of games featuring top-10 USA Tier 1 teams at the Minnesota Tradition NIT. The tournament includes more than 80 teams of players between the ages of 16 and 19 representing most of the top girls’ youth and minor hockey programs from all over North America.

CLICK HERE for the entire Tradition NIT Schedule. Games begin on Friday morning and run through the weekend until Sunday afternoon. The tournament is held at the Schwan Super Rinks at the National Sports Center in Blane, Minn. All of the games can be viewed via webstream at MNHockeyTV.

On the boys’ side of things this week, we bring you games from the first Tier 1 Elite Hockey League Showcase near Columbus, Ohio, and from one of the season’s largest tournaments, the CCM World Invite Motown in the Detroit area.

Here are this week’s matchups:

It’s a top-five showdown on the first day of the Minnesota Tradition NIT as perennial national-championship contenders Little Caesars and Pens Elite square off Friday. Little Caesars enters the weekend with a record or 7-4-0 and having outscored its opponents, 52-26. LC dropped its last two contests leading up to the event to the Nos. 17 and 5 Canadian U18 teams, the Whitby Wolves (7-4) and Durham West Lightning (3-1), after opening year with seven wins in their first nine outings. Those setbacks snapped a five-game winning streak that included a 4-1 victory against USA 16U No. 8 Assabet Valley Sept. 4. Little Caesars’ other two losses came vs. sixth-ranked Minnesota Northern Elite Green and the top ranked East Coast Wizards. Pens Elite brings a 10-4-0 record to the NIT, including victories in five of their last six outings coming into the tourney. They defeated Canada’s U18 No. 6 team, the Stoney Creek Sabres, 4-1, Oct. 16 in their most recent game for their third-straight victory. The winning streak followed a 5-3 loss to Canada’s 14th-ranked Whitby Wolves. Other losses came against the USA’s No. 20 Rome Grizzlies, Stoney Creek and USA No. 8 Assabet Valley. Pens Elite has beaten the USA’s Nos. 10, 16, 18 and 20 teams and has outscored its opponents, 48-19.

A battle of top-eight USA 19U teams highlights the second day of play in the 19U Blue Division at the Minnesota Tradition NIT. Many of the highly ranked Minnesota teams will finish up their fall seasons in the upcoming weeks, determining who will represent the state at USA Hockey Nationals in April before heading off to play for their school teams. Chicago comes into the weekend with a record of 11-4-0 and having outscored its opponents, 56-32. The Mission opened the season with four-straight wins, including victories against the USA’s fifth-ranked East Coast Wizards and 11th-ranked Boston Jr. Eagles. They also knocked off Canada’s U22 No. 11 Burlington Barracudas. The Mission then dropped an overtime game vs. the No. 6 Mid-Fairfield Stars and a 1-0 decision vs. Canada’s No. 6 U22 Central York Panthers. Chicago has won seven of its nine contests since then, falling only to the Nos. 1 and 11 Canadian U22 teams, the Durham West Lightning (4-2) and Burlington Barracudas (4-1). Chicago also recorded victories over Canada’s Nos. 3, 6 and 17 clubs during that stretch. Minnesota Elite Empowers Performance enters the weekend at 12-7-1 and holding a 62-47 scoring advantage against its foes. They have won their last two outings but are just 3-5-1 in their past nine games after starting the season by going 8-1-0 and 9-2-0. Elite Empowers has faced top-ranked Shattuck-St. Mary’s Prep seven times already, compiling a 2-5-0 mark against the Sabres. They beat No. 9 Minnesota Elite Tradition, 3-0 and 3-1, in their last two outings.

We have a matchup of USA Boys 16U top-20 teams Friday at the first Tier 1 EHL Showcase of the season near Columbus, Ohio. Buffalo enters the weekend with a 12-4-0 record and having outscored its opponents by 43 goals, 67-24. The Sabres also are riding a seven-game winning streak during which they have allowed just seven goals while scoring 35. The loss right before that stretch was a 2-1 setback vs. the No. 10 Cleveland Barons. Victories during the winning streak have come vs. the No. 14 Compuware, No. 15 Phoenix Jr. Coyotes and No. 22 Anaheim Jr. Ducks. Buffalo also skated to a 3-1 victory over No. 12 Pittsburgh Penguins Elite and dropped a 3-1 decision to the second-ranked North Jersey Avalanche. Nashville is 12-4-0 on the season, outscoring its opponents, 85-40. The Preds have won four-straight games since a 5-4 overtime loss against No. 50 CarShield Oct. 1. They rebounded to beat CarShield, 8-4, the next day to start the winning streak. Prior to that Nashville split a pair of games against the No. 25 St. Louis AAA Blues.

One of the biggest youth hockey tournaments of the year takes place this weekend as teams from all over North America in the 2013, 2012, 2011, 2010, 2009, 2008, 15U, 16U and 18U age groups descend upon the Detroit area to compete in the CCM World Invite Motown. The tournament features Tier 1 and Tier 2 boys’ teams from all over the continent, and this matchup of USA and Canadian top-14 2011 birthyear teams figures to be one of the opening-day highlights. The Reapers bring a sparkling 14-1-1 record into the weekend. They have outscored their opponents, 87-26, and their only loss came at the hands of No. 8 Windy City Storm by a 5-2 score Sept. 24. Since that setback the Reapers have won nine-straight contests, outscoring their opponents, 58-10 and recording two shutouts while allowing more than one goal just twice during that span. The only other blemish on Chicago’s record was a 2-2 tie against the 21st-ranked Ohio Blue Jackets. The Reapers have recorded victories vs. the USA’s Nos. 7, 8, 14, 15 and 20 teams. York Simcoe is 8-4-0 entering the tournament and holds a 34-21 scoring advantage vs. its opponents. The Express are riding a four-game winning streak as they travel to Detroit, a string of wins that followed losses to Ontario’s No. 14 and 16 teams. Earlier this year they recorded victories against the USA’s 28th-ranked Buffalo Jr. Sabres and 17th-ranked Little Caesars.