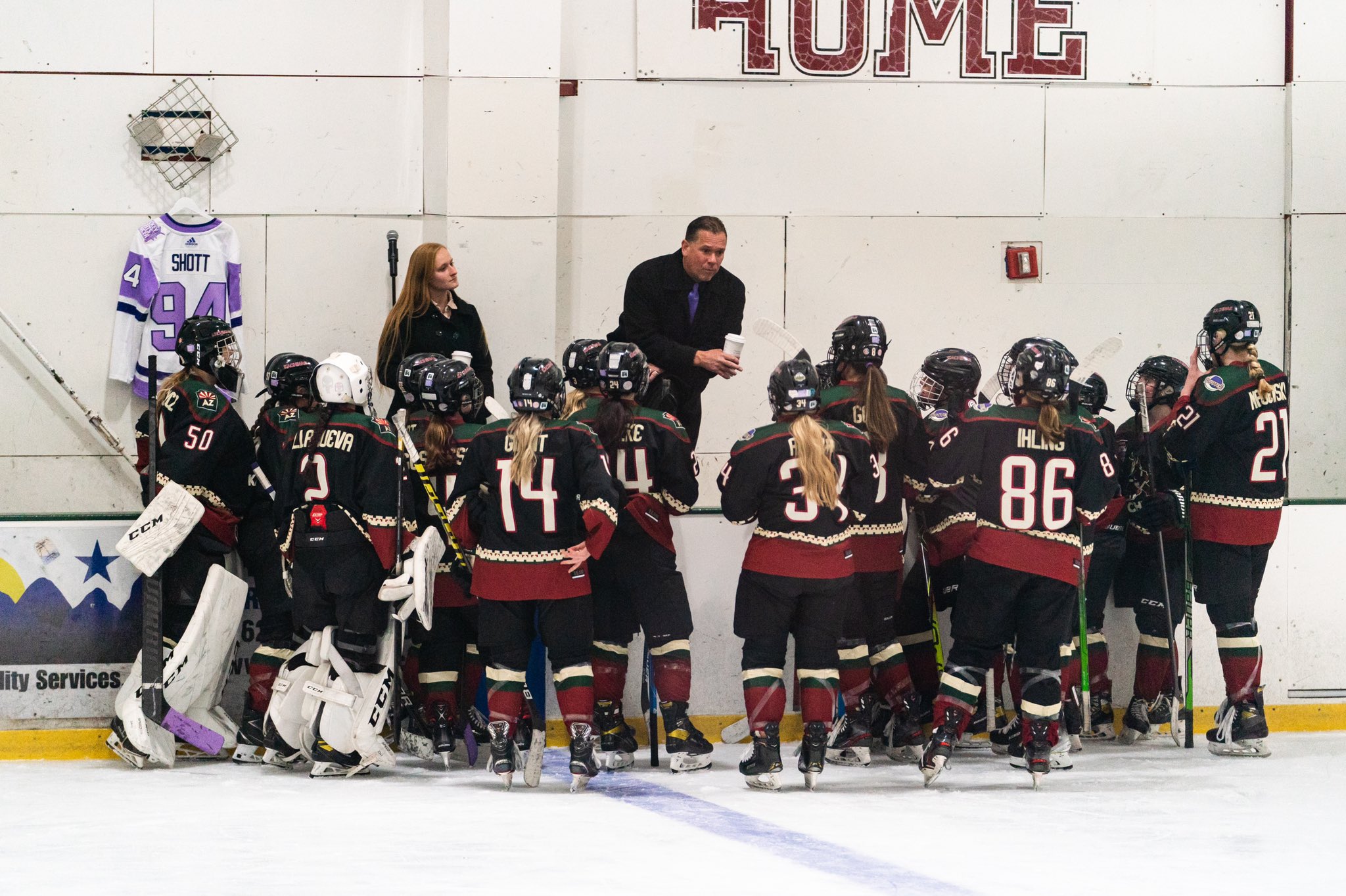 In honor of International Ice Hockey Federation’s World Girls Ice Hockey Weekend, being held for the 11th time Oct. 8-9, we are featuring four girls matchups for our Week 3 edition of MHR Games of the Week.

Not only does World Girls Ice Hockey Weekend celebrate young athletes already playing what has become one of the fastest-growing youth sports in the United States, it also provides opportunities for aspiring young athletes around the world to try the sport for the first time in organized, fun learn-to-play events.

For the sport’s newcomers, the IIHF has stated its goals for the weekend:

The IIHF works with hosts that are recruited from around the globe, including USA Hockey and its members as well as Hockey Canada and its members, to provide these opportunities, offering hosts the following support:

For organizations interested in hosting future events – or promoting girls hockey at any other time of year – much of this information is available online at this toolbox.

USA Hockey participates in Girls Hockey Weekend by providing a place for organizations that want to host a learn-to-play clinic to register for event support. That registration page can be found by CLICKING HERE.

In addition, USA Hockey encourages social-media interaction in support of girls hockey. The organization asks young players to show their hockey pride throughout the weekend by posting on various social-media platforms using hashtags #GirlsHockey and #WGIHW .

On its event information page, USA Hockey provides the following ideas for social-media posts along with a reminder to tag @USAHockey:

The USA Hockey information page also includes links to articles promoting girls and women’s hockey and providing the latest news and information related to the sport. In addition, there are more ideas for Girls Ice Hockey Weekend host sites and photos from pasts events.

Hockey Canada has a similar Girls Hockey Weekend information page. It is Hockey Canada’s hope that the events being held around the country will help “recruit, retain and engage players, coaches, officials and fans – old and new.” The goal is to continue growing the sport through grassroots programs organized and administered by local associations and communiities.

In 2019 before COVID, more than 23,000 Canadians celebrated the weekend at more than 225 events held across the country that included games, skills sessions, classroom activities and street hockey.

National Hockey League teams also have held Girls Ice Hockey Weekend events in the past. Be sure to check your local NHL team’s website for information about a program in your area.

World Girls Ice Hockey Weekend has been held since 2011. CLICK HERE for some highlights of past weekends. Participants of all ages are welcome.

Now, in honor of the 11th edition of International Girls Ice Hockey Weekend, here are our Games of the Week:

Week 3 MHR Games of the Week

The National Girls Hockey League returns to Pittsburgh for the second time for its 14U, 16U and 19U Tier 2 showcase. Each team will play at least five games, and this matchup of top-22 rivals will be one of the event’s highlights. All games can be seen on LiveBarn, and Gamesheet will be providing the official scoring services. The Jr. Flyers enter the weekend with a 6-7-3 record. They also will take on the No. 65 New Jersey Devils, No. 32 Columbus Blue Jackets and No. 6 Armstrong Arrows at the Showcase. Philadelphia is unbeaten in its last six outings, going 4-0-2, with one of the victories coming by a 3-1 margin vs. the Arrows. The Jr. Flyers also skated to a 2-2 tie with the N0. 8 Steel City Selects earlier in the year. Arizona is winless in its first eight contests while playing a difficult schedule that has included five U.S. Tier 1 opponents and a Canadian U22 Tier 1 foe. The Kachinas skated to a 2-1 loss against Tier 1 No. 38 Team Illinois and dropped a shootout decision vs. the Tier 1 No. 42 San Jose Sharks. They lost to the East Ottawa Stars, the 29th-ranked Canadian Tier 1 team, 4-0.

Sixteen Tier 1 14U girls teams representing some of the nation’s top programs will be competing in four divisions at the Edge Sports Center outside of Boston. The event includes the Nos. 1, 3, 7, 10, 14, 19, 22, 24, 25, 26, 30 and 31 teams in the U.S. Tier 1 14U category. All of the games can be seen on LiveBarn, and the complete schedule can be found by CLICKING HERE. In our featured contest, third-ranked Pens Elite brings a perfect 9-0-0 record into the weekend and will take on the 8-2-3 Pride. Washington had outscored its opponents, 48-14, before opening play Friday and came into the tournament riding a nine-game unbeaten streak (6-0-3) since opening the campaign by going 2-2. The Pride skated to a pair of victories over the No. 19 Jr. Flyers in their last two outings. Pens Elite held a 38-8 scoring advantage over its opponents prior to the tournament and had recorded three straight shutouts. They have held their opponents to 1 or fewer goal in seven of nine contests and own victories against No. 10 Assabet Valley (6-10) and Canada’s fourth-ranked Waterloo Ravens (2-1). Pittsburgh also earned a thrilling 3-2 shootout victory over Canada’s top-ranked Stoney Creek Sabres.

This early-season Alberta Female Hockey League matchup of top-five MHR-ranked Canadian teams is a rematch of a Sept. 17 tilt won by the Fire, 3-2. Calgary is 6-0-0 overall and has outscored its opponents, 25-7, while posting three shutouts. The Fire are 1-0-0 in league play, while the Slash are 2-0-0 in the AFHL and 5-1-1 overall. St. Albert holds a 26-7 scoring advantage over its foes and also has posted three shutouts. The Slash skated to a 2-2 tie with No. 3 Fraser Valley Rush, while Calgary knocked off the Rush, 5-3, and the second-ranked Regina Rebels 4-2. St. Albert is led offensively by forwards Rayna Franklin and Kennedy McQuade, who each have 4 points on 2 goals and 2 assists in the team’s two AFHL contests.

A pair of OWHL U22 Elite rivals face off as the seventh-ranked Lady Senators (3-0-2 OWHL) travel to face the host No. 18 Ice Wolves (2-2-0 OWHL). Ottawa is an impressive 17-1-2 overall and has outscored its opponents, 59-26, while allowing just 1.3 goals per contest. Kingston is 7-7-1 thanks to victories in its last two outings vs. the No. 24 Brampton Canadettes and the second-ranked Oakville Jr. Hornets. The Ice Wolves dropped a season-opening 1-0 decision to the USA No. 9 19U Mid-Fairfield Stars, fell, 3-0, to the USA No. 3 19U Bishop Kearney Selects and lost to the third-ranked USA 19U Chicago Mission, 5-3. They tied sixth-ranked Canada U22 Champlain College-Lennoxville, 1-1, and beat the No. 12 Canada U22 Oakville Hornets. The only blemishes on the Lady Senators’ record to date are a 2-0 loss to Stanstead College Prep, Canada’s No. 5 U22 team, and ties vs. the No. 17 U22 Etobicoke Dolphins and the top-ranked U22 Durham West Lightning. In OWHL play Ottawa has eight points and is tied for third place with the second-ranked Oakville Hornets, two points behind the 5-0-0 Burlington Barracudas.