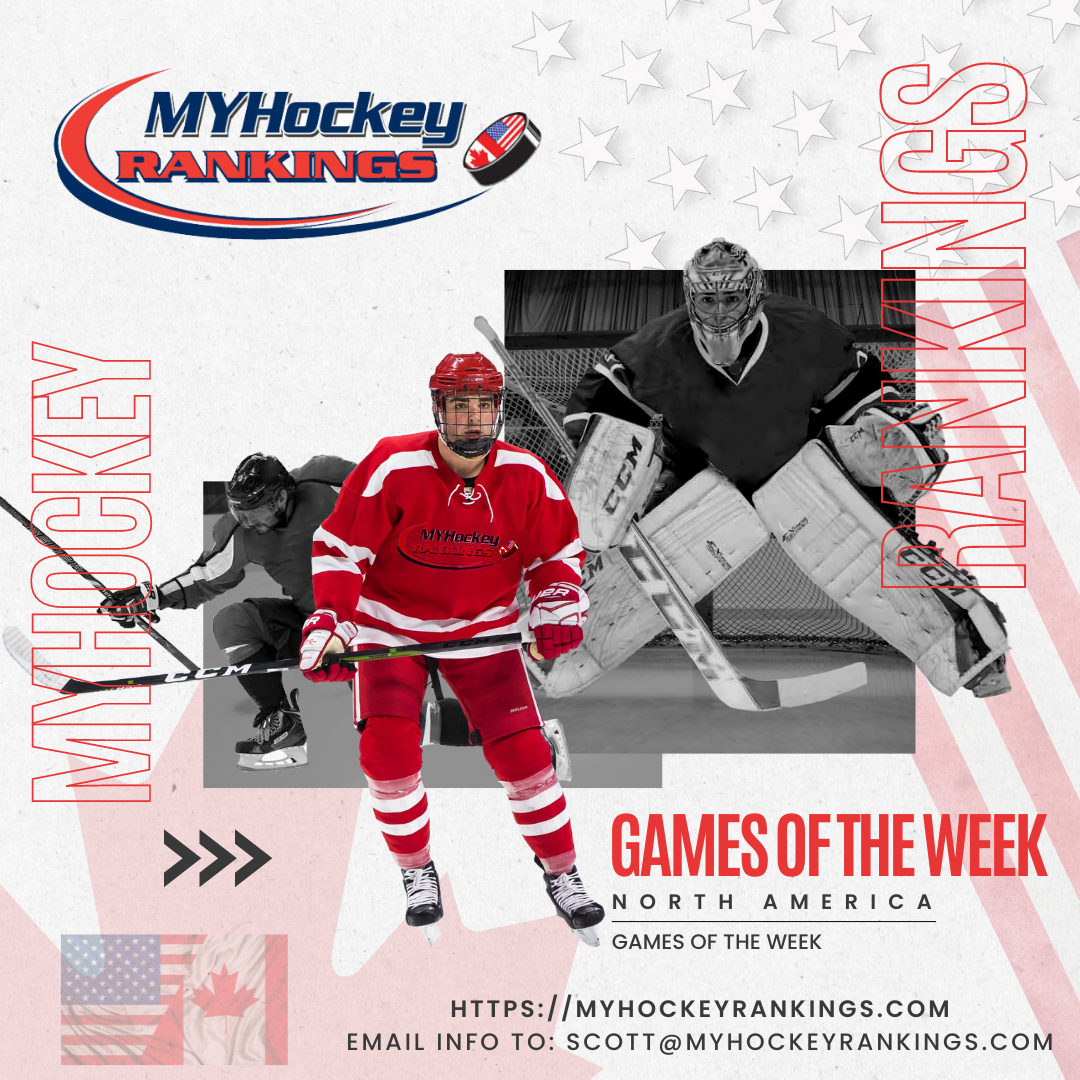 Welcome to the first edition of our MYHockey Rankings Games of the Week. For this week’s contests we first head to Western Canada for a BCEHL Girls 18U Championship Finals rematch before checking out a top-five matchup in the Upper Midwest Girls High School Elite League and then heading to the Northeast for a pair of USA Boys top-12 matchups.

It’s a rematch of the 2022 BECHL Championship Finals won by Fraser Valley at this weekend’s BCEHL Showcase in Surrey, BC. Fraser Valley hasn’t missed a beat heading into the 2022-23 season, sprinting out of the gates to a 13-3-1 record while outscoring its opponents, 63-22. The Rush are 3-1-1 in their last five games entering the event. They have beaten the No. 13 Etobicoke Dolphins, 3-2, and No. 2 Reginal Rebels, 3-2, while also posting a 2-2 tie vs. the No. 6 St. Albert Slash, 2-2. Fraser Valley also knocked off the No. 17 U22 Nepean Wildcats. The only losses have come vs. No. 5 U22 Stanstead College (2-0), No. 5 Durham West Lightning (3-2) and No. 1 Calgary Fire (5-3). In addition to capturing last year’s BCEHL title, Fraser Valley also won the Pacific Regional championship and earned a silver medal at the ESSO Cup. They are led by the reigning BCEHL Player of the Year, Ashley D’Ottavio along with all-stars Vienna Rubin and Clara Juca among 16 returning players. The Capitals, who have nine players returning from last year’s squad, only have played six games and posted a 2-4-0 record in those contests. They have victories against the No. 33 Thompson-Okanagan Lakers and No. 65 Prince Albert Bears and dropped games to the top-ranked Fire and No. 2 Rebels.

This is an Upper Midwest Elite League rematch of Shattuck’s 5-4 overtime victory Thursday. That win was the Sabres’ third in three meetings with Tradition this season as they won the other two contests by a combined 9-2. The latest victory boosted Shattuck’s record to 11-1-0, with the only setback coming at the hands of ninth-ranked Minnesota Elite Empowers, 4-3, Sept. 11. The Sabres have outscored their foes, 56-12, allowing more than one goal twice. Minnesota Elite Tradition brings a 4-4-2 record into the weekend, with three of those losses coming against top-ranked Shattuck. The other setback was a season-opening 3-2 decision vs. Minnesota Elite Empowers.

A pair of Pennsylvania rivals face off outside of Philadelphia as the Pittsburgh-based stars head east for this EP Cup Series matchup. The Jr. Flyers have gotten off to a fast 11-1-0 start, outscoring their opponents, 53-12, in the process. Included among their 11 victories are wins against the No. 22 East Coast Wizards, No. 18 Boston Regals and No. 10 New Jersey Rockets. Philly’s only loss was a 3-2 overtime setback vs. the No. 15 Cape Cod Whalers. The Stars also have played 12 games, going 10-2-0 and piling up a 69-12 scoring margin. They have won 12 straight games after dropping a pair of 3-1 decisions to the No.10 Rockets to open the season.

A pair of Northeast Pack rivals who may be destined for an April Showdown at USA Hockey Nationals meet in an early season matchup in Rhode Island. Bishop Kearney sports an early 5-5-3 record while playing the toughest schedule in the country to date. The Selects have posted victories over the No. 2 Chicago Mission, No. 3 Penguins Elite and No. 7 Los Angeles Jr. Kings while recording ties vs. the No. 8 Mid-Fairfield Jr. Rangers, No. 5 overall 15/16U Minnesota Blades and No. 9 Shattuck St. Mary’s. BK has won two straight entering the weekend. MSC is 9-1-0 on the season, falling only to top-ranked Little Caesars, 4-1, in its most recent outing after opening the campaign with nine straight wins. The best wins have come vs. No. 6 Compuware, 2-1, and No. 15 Phoenix Jr. Coyotes, 3-2 in a shootout.