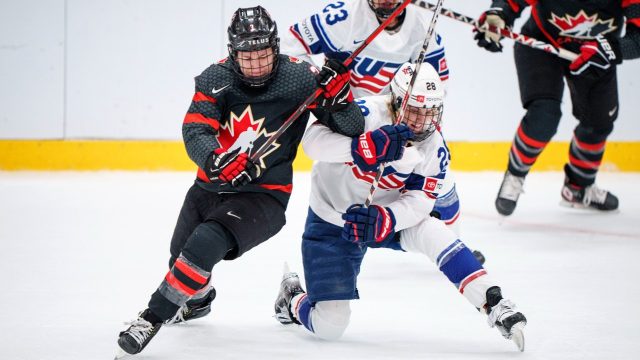 This time it’s the same, but different.

Later today in Denmark when a pair of familiar rivals meet yet again with a gold medal on the line, it will mark the third such contest between the women’s hockey teams representing Canada and the United States in the past 12 months. This time, though, when the puck drops on the International Ice Hockey Federation Women’s World Championship gold-medal game at 1:30 p.m. Eastern, there will be quite a few new, younger faces mixed in with the older, trailblazing stars most hockey fans know well.

For some players, it will be their first taste of U.S. vs. Canada gold-medal drama. But other young players who have experienced it before and whose roles are evolving rapidly will be counted on more than in the past. Either way, though, it appears as though a changing of the guard is upon us.

The Americans entered the 2022 World Championship desperate to end a rare stretch of dominance by one team over the other in this bitter neighborhood feud. Dating back to last summer’s WWC in Calgary, the Canadians had won five straight games and captured nine of the previous 11 meetings between the two international powerhouses.

While “dominance” may be overstating the situation given that seven of those contests were decided by a single goal and four required overtime, world-class sports are a results-based business, and all that really matters is the bottom line. The results were disturbing enough for USA Hockey to decide it was time to make some changes.

John Wroblewski was brought in to be head coach after spending time coaching professionally in the American Hockey League and on the men’s side for USA Hockey’s National Team Development Program. He brought with him a creative, free-flowing style and a willingness to mix the old with the new.

At last year’s WWC in Calgary, the ongoing COVID-19 situation and the necessity to bubble the tournament caused the IIHF to expand rosters, which allowed the United States and Canada to bring along some younger players for the experience and to spend time with the veterans who had helped build those programs. One criticism of the former U.S. regime was a lack of willingness to use some of the younger players in more important roles. The youngest players mostly were in and out of the lineup, and those who did play often were used in supporting roles.

That philosophy continued into the Olympics when Lacey Eden, a 2002 birthyear forward at the University of Wisconsin who played meaningful minutes during the gold-medal game in Calgary, was left off the roster. After falling twice to the Canadians despite controlling much of the play and outshooting them by wide margins in Beijing, USA Hockey decided it was time to look at a new approach.

It was clear from the posting of Wreblewki’s first lineup for a pre-WWC tune up against Canada that the youngsters were going to be key to the team’s performance in Denmark.

Forward Hannah Bilka, an ’01 speedster from Boston College, was inserted on the first line along with superstar Hilary Knight and Hannah Brandt, a veteran of two Olympics and six World Championships. Newcomer Taylor Heise (’00), the NCAA women’s player of the year last season, landed on the second line, centering Alex Carpenter, who has played in two Olympics and seven WWC’s, and three-time Olympian Amanda Kessel, a six-time WWC participant. Eden was placed on the third line alongside Kendall Coyne Schofield, the world’s fastest woman who is playing in her 10th WWC after making three Olympic appearances, and Kelly Panek, a two-time Olympian competing in her fifth World Championship.

Even the U.S. fourth line is a nice mix of youth and experience, featuring ’99 Jesse Compher, who already has played in an Olympics and three WWC’s, ’99 Grace Zumwinkle, who made a splash at last year’s WWC and in Beijing, and veteran Hayley Scamurra, who is appearing in her fourth WWC.

The youth simply hadn’t been mixed in with the veterans to this extent in the recent past, and the results this time around have been spectacular. The youngsters have provided some jump and enthusiasm throughout the lineup to go along with the world-class skill and big-game experience possessed by the more familiar faces.

While Knight has been Knight, pouring in six goals and three assists in six games to become the all-time leading WWC scorer, and Kessel ranks second in the tournament scoring race with 16 points, Heise and Bilka rank first and third in scoring with 18 and 12 points, respectively. Eden buried the game-winning goal in the third period of an opening-round 5-2 victory against Canada and has four points. Harvey ranks 12th overall in scoring with eight points from the blue line.

Ironically, the Canadians also have been led by their youngest player. Sarah Fillier, a ’99 forward who stars at Princeton, leads the team and ranks fourth in the tournament with 10 points. Of course, Captain Clutch Marie-Philip Poulin, a career Yankee killer, has turned in her usual solid performance, ranking seventh with nine points, but the next most productive Canadian has been ’98 defender Ella Shelton, who in 13th in scoring with eight points in her third WWC.

Another newer face on the Canadian side is Sarah Potomak, a ’97 forward who played NCAA hockey and put up huge offensive numbers for Minnesota. This year’s WWC marks Potomak’s second overall WWC appearance for Canada and her first since 2017. She ranks fourth on the team and 20th overall in scoring with six points.

While a few of the lineup changes for both teams are coaching decisions, some of them are necessitated by the natural roster attrition that takes place in all elite sports. For the United States, veteran forward Brianna Decker still is recovering from a broken leg suffered at the Olympics, goalie Alex Cavallini is pregnant and longtime National Team members Megan Bozek and Dani Cameranesi retired.

On the Canadian side, Melodie Daoust was unable to attend Hockey Canada’s selection camp and Natalie Spooner is pregnant while Olympic all-tournament defender Claire Thompson and veteran forward Rebecca Johnston also aren’t playing. That has given other younger players such as ’96 forward Victoria Bach and ’98 forward Kristin O’Neill, who were left off the Olympic team, a chance to participate in Denmark. Jesse Eldridge, a ’97 forward, is making her first appearance for Team Canada.

Similar to the U.S., most of Canada’s newcomers and younger players have made a seamless transition into the lineup and taken on key roles. Meanwhile, veterans such as Poulin and forward Sarah Nurse haven’t had to carry the load alone. Nurse, who set an Olympic scoring record in Beijing, has three points as does Brianne Jenner. Veteran defender Renata Fast has contributed four points.

While the names may be starting to change, the results remain the same. Canada and the United States have continued to dominate the field, perhaps even more than in recent years thanks in part to the decline of a Finland team that is in the midst of a slight rebuild.

The good news for the sport is that an offensively talented group from Czechia emerged from Group B to upset the Finns, who are perennial bronze-medal favorites, in the quarterfinals, and Sweden has made a promising return to the WWC in its first appearance since 2019. The Swedes put up a strong fight in a 3-0 quarterfinal loss to Canada, and the Czechs, who only have qualified for the WWC six times, went on to knock off Switzerland earlier today to earn their first medal.

There remains a huge drop in the level of play from the U.S. and Canada to the next tier of teams, but that won’t make today’s gold-medal matchup any less intense or exciting.

The Americans were undefeated in pool play, outscoring their opponents, 30-3, while the 3-1 Canadians outscored the teams they played other than the United States by a 17-2 margin. Canada won its two playoff games by a combined score off 11-1, while the U.S. outscored its playoff opponents, 22-1.

Today marks the 20th time in 21 Women’s World Championships that Canada and the United States have met with a gold medal on the line. They also have faced off in six of seven Olympic gold-medal games. Most – if not all – of those matchups have been classics. Today’s contest, which can be seen in North America on NHL Network, TSN and RDS, should be no different.

These two teams met in a pre-tournament game, with Canada skating to a 3-1 victory. The U.S. responded with a 5-2 preliminary-round victory to snap the Canadians’ series win streak. That should do wonders for the Americans’ confidence, but there is a catch.

Canadian goaltender Ann-Renee Desbiens, who set the NCAA record for most career shutouts for all levels and genders while playing at Wisconsin, has owned the United States in recent important games. She made 51 saves in a 4-2 preliminary-round victory in Beijing before turning aside 38 U.S. shots to lead her team to Olympic gold. She also was the winning netminder in last summer’s WWC gold-medal tilt.

When the Americans beat Canada last week, Desbiens was not between the pipes. Instead, they beat backup Emerance Maschmeyer, who allowed four goals on 28 shots. So, while the swagger may be back on the U.S. side, there may be some lingering doubts if they see No. 35 in goal for Canada today.

That’s just one reason among many that today’s game is must-see TV.