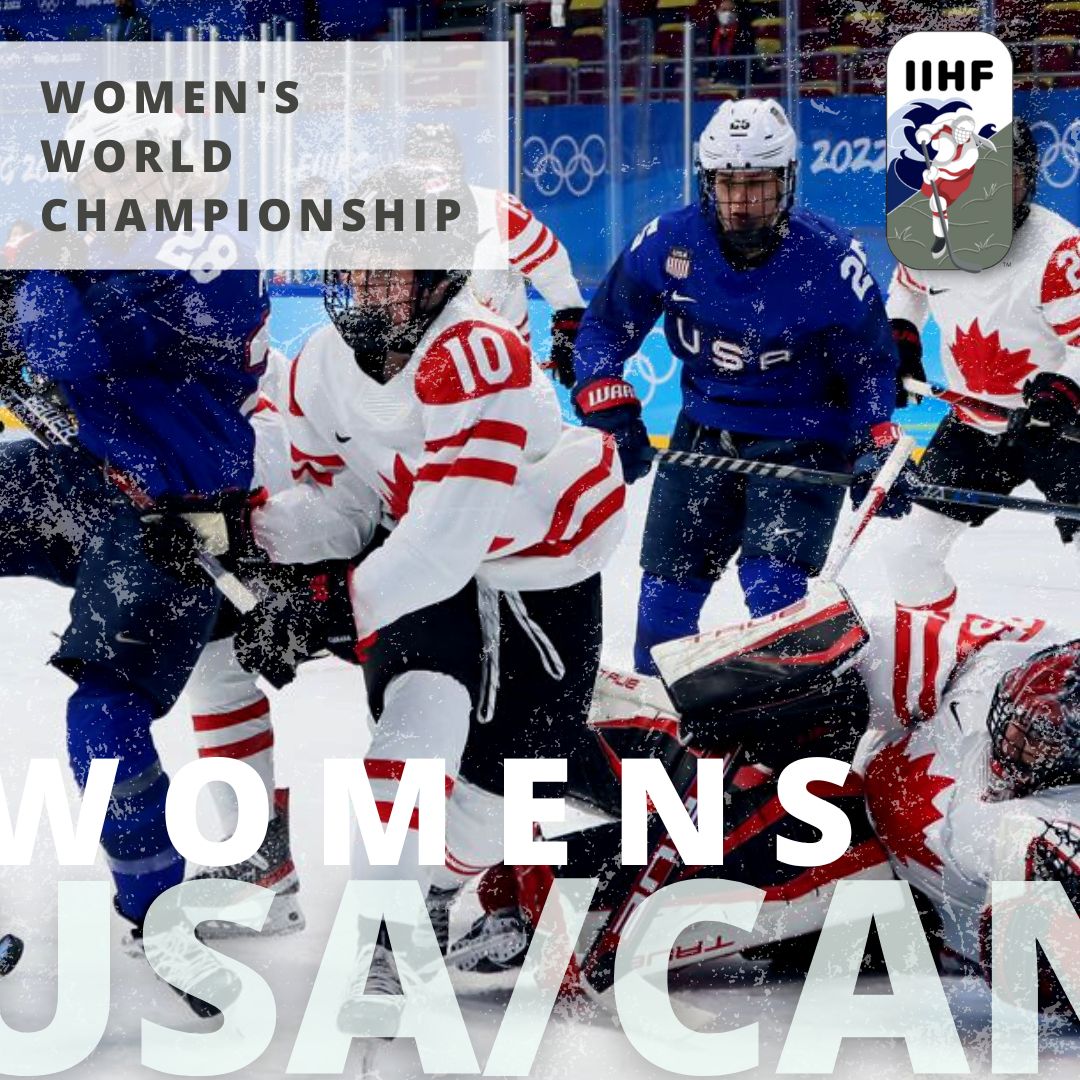 When it comes to international hockey, no matchup is more revered or anticipated than games between Canada and the United States. They are the world’s top two teams, usually by a wide margin, and their rivalry is one of the fiercest in sports.

The vibe will be a little different at the International Ice Hockey Federation World Championship today, however.

While the Canada-USA matchup, which faces off at 2 p.m. Eastern Time and can be viewed in North America on NHL Network, TSN and RDS, will be the best game of the preliminary round and the one that is most widely viewed by hockey fans in our part of the world, it won’t be the most important contest on the final day of pool play. The team with the most on the line is Denmark as the host team can finish third in Group B and earn a quarterfinal berth with a victory or be relegated with a loss.

At 1:30 p.m. Eastern in Frederikshavn, Denmark, as the Canadians and Americans are warming up for their tilt at KVIK Hockey Arena in Herning, the puck will drop on one of the most important games in Danish women’s hockey annals as Denmark takes on geographic-rival Germany in a game that means everything to the host nation.

Denmark controls its own destiny. The Danes enter the contest with record of 1-2 and three standings points, two points ahead of the Germans and one behind Hungary, which already has played all four of its opening-round games. Germany got its lone point with a heartbreaking 4-3 shootout loss to Sweden Aug. 27, a setback that knocked the Germans out of quarterfinal contention and has them on the verge of relegation.

Germany can save face today and avoid being dropped from the Elite Division with a regulation victory against the hosts. So, while in the grand scheme of German women’s hockey history this may not be one of the nation’s most important games, for these players on this day it may be the biggest game of their lives.

Denmark’s lone victory was a 1-0 thriller against Hungary Aug. 28 that was decided by Julie Ostergaard’s third-period goal. Josefine Jacobsen, the best forward in the world you’ve probably never heard of, set up the game-winner.

“Our captain said, ‘Who wants to be the hero?’” Ostergaard told reporters after that game. “That it was me was just incredible.”

There was more than one hero, however, as goaltender Lisa Jensen turned aside 45 shots in the historic victory to earn the shutout for Denmark, which was outshot, 45-19. The win was Denmark’s first-ever while playing in the WWC’s top division.

Denmark made its first appearance in the Elite Division of the WWC last summer in Calgary. The Danes lost all four of their games to finish in 10th place but there was no relegation because of the circumstances created by the worldwide spread of COVID, which caused the 2021 event initially to be cancelled before ultimately being postponed from April until August.

Denmark had qualified for the 2020 WWC by placing second in the Division 1A World Championship in 2019 but had to wait two years to compete because of COVID cancellations and postponements. While that was excruciating and disappointing for the players, ultimately it provided them with two opportunities to compete against the world’s best, and they are on the verge of making the most of their second chance.

“I think we just wanted to go there and do our best {last year},” Jakobsen told Hockey Canada’s Meghan Johnson prior to this year’s WWC. “It didn't turn out very well, but we were lucky to have another chance this year. I think we have learned a lot, even though we lost a lot of games.”

Jacobsen, the team captain, has been with the Danish National Team since 2007 and usually lines up at center, but for the last game she was paired on defense with Sofie Skott since defender Amalie Andersen was out of the lineup. There is no mistaking how important these games are to the competing teams when one of the game’s top forwards willingly drops back to play defense. Any game is winnable if you can prevent your opponent from scoring.

The stakes are even higher today, but the math is easy. For Denmark, any type of win, an overtime loss or a shootout loss earns the Danes a quarterfinal matchup against either the United States or Canada. A regulation loss and they are removed from the top division for next year’s WWC while Germany stays.

This is their gold-medal game.

“I'm very happy and proud that we get the chance to play on home ice and show the Danish people who we are and what we’re made of,” Jakobsen told Hockey Canada’s Meghen Johnson before the tournament got underway.

Home ice may prove to be the difference today in a must-win game against a team capable of dashing the hopes of the host nation. A glance at comparable results shows that Denmark has scored one fewer goal than Germany while surrendering four fewer scores. The Germans fell to Hungary, the team Denmark beat, 4-2 and were outshot, 28-24. Germany suffered the shootout loss against a Swedish team that beat the Danes, 5-2. Germany lost to Czechia, 5-0, compared to Denmark’s 5-1 score vs. the Czechs.

Today’s contest should go down to the wire.

Although the Denmark-Germany matchup is the only one that will decide a quarterfinal berth, there are other meaningful games today. Winless Japan is locked into being Group A’s fifth seed, but Finland and Switzerland will play to determine the third and fourth seeds in Group A.

Over in Group B, Czechia and Sweden face off to determine that group’s top seed, which is very important since whichever team finishes first avoids a quarterfinal matchup against Canada or the United States. A win or tie through 60 minutes would earn the top seed for Czechia.

While all five Group A teams advance to the playoff round, only the top three from Group B earn trips to the quarters, with the top seed taking on either Finland or Switzerland Wednesday. Group B’s No. 2 seed will face the loser of the Canada-United States matchup, with the third seed facing the winner of that grudge match.

And that brings us back to today’s battle of North American powers.

Canada and the United States have displayed their usual dominance at the WWC, going a combined 6-0 so far and outscoring their opponents by a combined 42-3. Technically, the U.S. holds Group A’s top spot heading into the game with a goal differential of plus-24 after outscoring its foes, 25-1. Canada has outscored its opponents by a 17-2 margin.

While today’s rivalry showdown will carry much less importance than the gold-medal matchup between the world’s top-two teams that is likely to transpire in a few days, the contest if very important for a U.S. squad looking to get back on track after falling to the Canadians in the gold medal games of last summer’s Women’s World Championship and at the Beijing Olympics in February.

In fact, Canada has won nine of the last 11 meetings between the two international powerhouses, but that one-sided record has hardly been indicative of how closely matched the two nations are. Most of those games could have gone either way, with seven of the 11 being decided by a single goal and four requiring overtime. The U.S. outshot Canada, 53-27, in an opening-round Olympic loss and had a sizable shots advantage in the gold-medal game despite falling.

This time last year, with the U.S. coming off gold medals at the previous WWC and Olympics, it was the Canadians who were questioning themselves, but this year the Americans should feel a greater sense of urgency than usual entering this preliminary-round matchup. A victory would provide a big confidence boost heading into the playoff round, especially if it comes against goaltender Ann-Renee Desbiens, who seems to have had the Americans’ number lately.

Maybe Canada plays a different goalie since this game isn’t for all the marbles so that even if the U.S. wins there still might be a question in the players’ minds about whether they can beat Desbiens. While neither side ever wants to lose to the other when these two nations collide, gamesmanship and mind game always factor into any great sports rivalry.

Another way for the Americans to build confidence heading into the quarterfinals would be to shut down Yankee-killer Marie-Philip Poulin, Canada’s “Captain Clutch” who has made a habit of crushing the hopes of many U.S. teams during her amazing career.

"We've set the table for a matchup against Canada tomorrow as best we could, and we've done a great job building to this point,” U.S. Coach John Wroblewksi told USA Hockey after the Americans beat Switzerland Monday. “Tomorrow is another step in this process, and we'll see where we're at and adjust from there heading into the quarterfinals."

Longtime U.S. superstar Hilary Knight, who had two goals in the win against the Swiss, also can provide an emotional boost for the Americans. Already the WWC’s all-time goal-scoring leader, Knight needs just two points to tie Canadian Hall of Famer Hayley Wickenheiser for the tournament’s career points lead.

An accomplishment like that would be even sweeter coming against Knight’s arch-rivals, but you can be assured the Canadians will do everything in their power to prevent it from happening against them. And since you probably are wondering, Canada surely would prefer to continue their recent trend of success against their rivals to ensure the U.S. continues to question itself with another probable gold-medal matchup looming on the horizon.

“It’s wonderful hockey; it’s the most beautiful rivalry in sport,” Knight said prior to the Beijing Olympics. “It gets the best and worst out of both of us at the same time. It’s a wonderful game.”

There’s no doubt that it always is a wonderful game when Canada and the United States square off in women’s hockey. Today, however, for once it won’t be the most important game.

And that’s great for the sport.