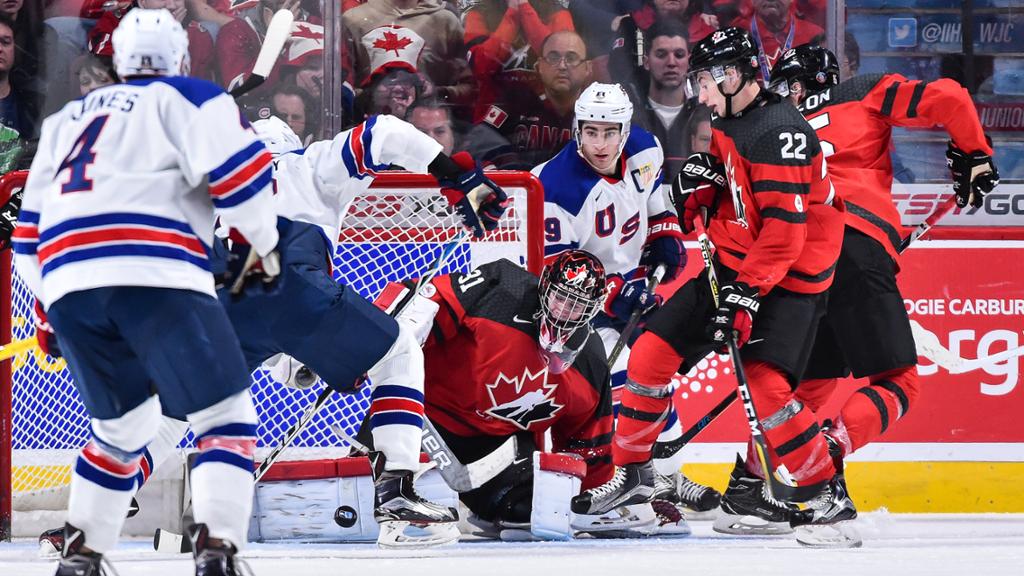 No matter when or where the International Ice Hockey Federation World Junior Championship is played, the tournament has evolved into an annual battle among the United States, Canada and Finland for the gold medal.

Traditional international hockey powers Russia and Sweden continue to be in the mix to earn medals every year, but during the past nine years the Americans, Canadians and Finns each have captured gold three times.

This year appears to be no different, except that Russia will not be competing.

Hopefully the last COVID-19 hockey casualty, the rescheduled 2022 WJC, begins Aug. 9 and runs through Aug. 20 at Rogers Place in Edmonton, Alberta. Originally scheduled to be played Dec. 26 through Jan. 5 in Edmonton and Red Deer, the 2022 event got underway on schedule even though many pre-tournament games were cancelled as the Omicron Variant made its way through several WJC team rosters.

Play opened with Finland handing Germany a 3-1 setback Dec. 26, followed by Sweden knocking off Russia, 6-3, Canada beating Czechia, 6-3, and the U.S. holding off Slovakia, 3-2, that same day. Four more games were played Dec. 27, highlighted by Germany’s 2-1 overtime victory against Czechia and a 4-2 win by Russia against Switzerland, before things took a turn for the worst Dec. 28.

The Americans and Czechs each had to forfeit games because of positive tests Dec. 28, and when it became clear there would be another forfeit the following day, the IIHF decided that the tournament could not go on.

“We owed it to the participating teams to do our best to create the conditions necessary for this event to work,” IIHF President Luc Tardif said in announcing what was then considered the tournament’s cancellation. “Unfortunately, that was not enough.”

In a joint announcement by Hockey Canada, President Scott Smith and CEO Tom Renney concurred with the decision despite the organization’s best efforts to make the event a reality.

The IIHF cited an inability to maintain the tournament’s integrity as an additional factor in the governing body’s decision. Later it was announced that the event would be held at Rogers Place in August, starting from the beginning and with all previous records and results erased.

There would be some other changes, too, as Russia was banned from international competition because of its invasion of Ukraine. The elimination of the Russians meant that Latvia would be added to the 2022 field as part of Group A, with Austria moving from Group A to Group B.

Play in the 2022 WJC begins in Edmonton Aug. 9 at 2 p.m. Eastern with a rivalry matchup between Czechia and Slovakia. The United States opens defense of its 2021 title the same day at 10 p.m. Eastern against Germany. Canada’s first game is Aug. 10 at 6 p.m. Eastern vs. Latvia. The U.S. beat Canada, 2-0, buoyed by 34 saves from Florida Panthers goalie Spencer Knight to capture the 2021 gold medal in Edmonton.

All 2022 tournament games can be viewed live on NHL Network in the U.S. and TSN/RDS in Canada.

In addition to Canada and Latvia, Group A includes Slovakia, Finland and Czechia. Joining the Americans in Group B are Austria, Sweden, Germany and Switzerland. Canada should face a stiff challenge from Finland, which will look to hold off a solid Czech team, as teams jockey for quarterfinal seeding in the preliminary round. The U.S. is the overwhelming favorite to earn the top seed in its group, although Sweden never should be overlooked, and on a given day Germany and Switzerland can be difficult to play against.

The top-four finishers advanced to the quarterfinals, which get underway Aug. 17. Two semifinal contests are scheduled for Aug. 19, with the gold- and bronze-medal games slated for Aug. 20.

Here is the complete 2022 WJC schedule, with the top matchup of each day highlighted in BOLD:

Here are the results and standings before the WJC was halted Dec. 29:

The United States will look to become the first team since Canada won five straight gold medals between 2005 and 2009 to win back-to-back championships.

All time, Canada leads the way with 18 gold medals go along with 10 silver and five bronze, but the Russian national teams of various names have captured 37 total medals (13 gold, 13 silver and 11 bronze) for the overall medal lead.

Finland and the U.S. each have captured five golds, but Finland has earned 16 total medals (four silver, seven bronze) compared to the Americans’ 13 (two silver, six bronze). Sweden has more overall medals than the U.S. and Finland with 19, but the Swedes have only earned gold twice. Czech Republic and Czechoslovakia have totaled 14 medals overall.

The U.S., Canada and Finland have dominated the WJC in recent years, each capturing three gold medals in the last nine tournaments. Canada has its three most recent golds since 2015, with the last one coming in 2020 in the Czech Republic. Finland’s third overall gold medal came in 2014 in Sweden, and the Finns also won in 2016 on home ice and 2019 in Canada. The Americans captured gold in Russia in 2013 and Canada both in 2017 and 2021.

During those nine years of gold-medal dominance by the Canadians, Americans and Finns, Canada also earned two silver medals while the U.S. won a single silver and two bronze and Finland took home one bronze. Sweden and Russia have finished second three times apiece in that span, with the Russians also placing third four times and Sweden recording one third-place finish. Finland earned bronze in 2021, finishing behind the U.S. and Canada, respectively.

Canada at a Glance

Despite Canada’s fast start back in December before the WJC was postponed, the Canadian roster looks much different than it did at the end of 2021. Seven forwards and two defensemen who weren’t on the team the first time around will wear the maple leaf in Edmonton when Canada opens play Aug. 10.

Never fear, though, potential 2023 top NHL draft pick Connor Bedard, who netted four goals in a December rout of Austria, along with team captain and Anaheim Ducks first-round draft pick Mason McTavish, who led the Hamilton Bulldogs to the Ontario Hockey League championship, will be there to lead the way in Edmonton. And they will be joined by Memorial Cup-hero William Dufour, who recorded 116 points for St. John of the Quebec Major Junior Hockey League before helping the host Seadogs capture the coveted trophy.

Depth is never a question when it comes to Canada, and this tournament is no different as the Canadians go five deep at center, including four NHL draft picks and Bedard, who likely will see time on the wing. Defensively, blue-liners Donovan Zebrango and Ryan O’Rourke already have combined to appear in nearly 100 American Hockey League games, and shifty two-way defender Olen Zellweger was named the Western Hockey League’s top defenseman after recording 78 points in 55 games.

In goal, Canada returns its top-two netminders from December, including starter Dylan Garand, who was named the major-junior Canadian Hockey League Goaltender the Year after posting a 2.15 goals-against average and .916 save percentage for the WHL’s Kamloops Blazers. While Garand was the starter back in December, it remains to be seen how time between the pipes will be split this time around as Canada also returns Sebastian Cossa, who led the Edmonton Oil Kings to the WHL Championship.

USA at a Glance

Like Canada, the United States roster is surprisingly different from the group that wore the red, white and blue back in December. Two of the team’s three goaltenders were not on the team initially, with only Kaidan Mbereko returning, and there are seven additional new faces.

Faber, who played in the Olympics, will serve as team captain. Forward Matt Knies, also a second-round draft pick, joined Faber on the U.S. Olympic Team, while another second-round selection, recently added forward Thomas Bordeleau, played for the U.S. National Team at the World Championships.

Hughes is the younger brother of NHL stars Jack and Quinn. He was selected fourth overall by the New Jersey Devils and put up 39 points in 41 games as a freshman at the University of Michigan in 2021-22 to finish among the top-10 for the Hobey Baker Award. Cooley compiled 75 points in 51 games for the U.S National Team Development Program U18 team and recorded 10 points in six games to help the Americans claim the silver medal at the U18 World Championship.

Another August addition, big power forward Charlie Stramel, will be a freshman at Wisconsin this fall and figures to be a coveted prospect in the 2023 NHL Draft. He had 22 points in 26 outings for the NTDP U18 team. Stramel recorded five points i six games at th U18 World Championship.