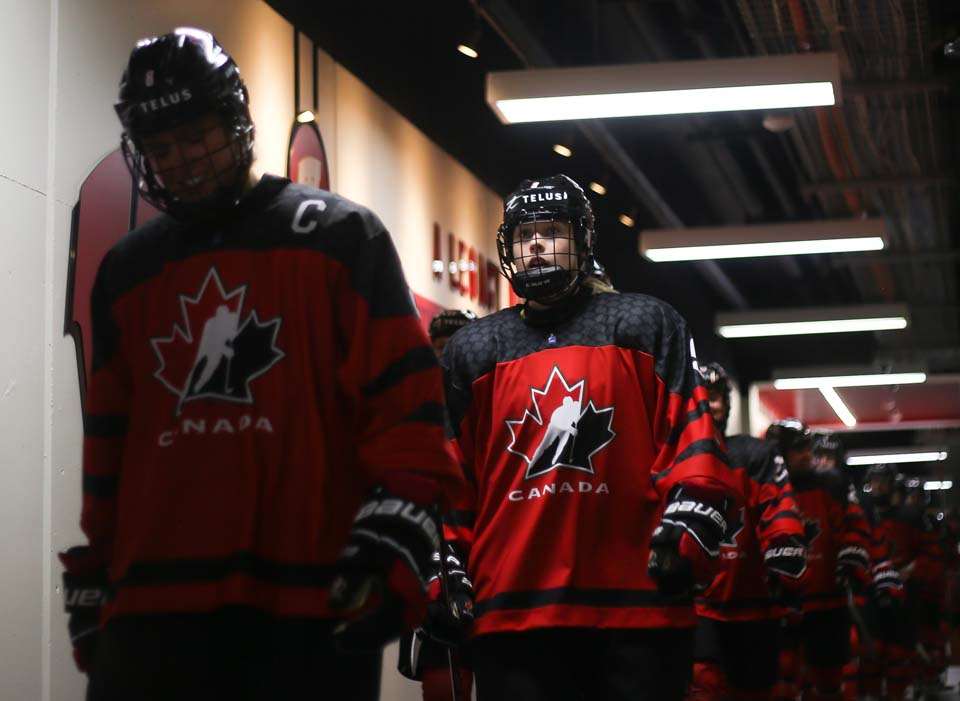 Canada Looks to Find Its Game in U18 WWC Quarterfinals

One argument as to why international women’s ice hockey hasn’t become more popular among casual sports fans is a lack of parity. The United States and Canada are penciled into the gold-medal game by pundits prior to most international competitions, and in the past they regularly have steamrolled the rest of the field to turn those predictions into reality.

But if this year’s International Ice Hockey Federation Under-18 women’s World Championship is any indication of what’s in store for the future of the sport, that argument will be cast aside in the very near future.

All it takes is a look at the standings and results thus far to understand why.

The U.S. has proven to be its usually dominant self, topping Group A with a perfect record in pool play while outscoring its opponents by a staggering 18-1 margin. That impressive resume includes the Americans’ most lopsided win ever against Canada, a 7-0 decision Thursday. Meanwhile Czechia also went unbeaten in Group B while piling up a 12-2 scoring differential.

Every other nation in the eight-team field posted the same 1-2 preliminary-round record, however, with Finland recording its first-ever U18 WWC victory against Canada before falling to Sweden, 4-3. The second playoff seed in Group A was determined by goal differential, with Finland’s minus-4 deficit leading the way. Once Finland was removed from the tiebreaking equation, Canada got the nod for the third seed because of its 3-1 win against Sweden In terms of goal differential, however, Sweden actually posted a minus-6 compared to Canada’s minus-7.

That tiebreaker was how close we were to the possibility of a U.S.-Canada semifinal for only the second time in the tournament’s 14-year history. Those two countries have faced off for the gold medal in 12 of the 13 U18 WWC’s contested to this point.

Over in Group B the situation was very similar, with Slovakia avoiding the relegation game and advancing to the quarterfinals despite being a late addition to the tournament when Russia was suspended from competition earlier this year. The Slovaks dropped their first two contests before unleashing an offensive barrage that resulted in a 6-2 victory against Germany Thursday.

They needed to win by at least four goals to advance to the playoff round. Things got dicey when Germany’s Yvette Reichelt tallied at 12:28 of the final period to cut the margin to 5-2, but Barbora Kapicakova responded with just under four minutes to play to complete the miracle.

For their efforts, as the second seed from Group B, the Slovaks get to take on an angry – yet faltering – Team Canada Friday at 5 p.m. Eastern in the quarterfinals. Czechia, the top Group B finisher, faces Sweden, Group A’s fourth-place team, at 9 p.m. Both games are scheduled for the University of Wisconsin’s LaBahn Ice Arena. Switzerland and Germany play in the 5 p.m. relegation game at Bob Suter’s Capitol Ice Arena.

For Canada, perhaps the unexpected extra game in the quarterfinals will provide the motivation and extra work the group needs to find its offensive game. The Canadians have been shut out twice, with their only goals coming in a 3-1 victory against the Swedes.

They rank dead last in tournament scoring efficiency, seventh out of eight in power-play success, sixth in penalty killing and sixth in save percentage. Canada has just three goals on 118 shots for a .248 shooting percentage and is 0-for-10 with a player advantage. The Canadians have surrendered five power-play goals in 18 kill opportunities. Canada also leads the tournament in penalty minutes with 40.

“I think we just have to move our feet and get on the D side of their bodies rather than reaching,” Canadian Head Coach Howie Draper told the IIHF after the loss to the United States. “So, we get into trouble there. We’ve got to do a better job angling through the neutral zone. I think sometimes we’re just a little careless with our stick. We’ve got to get our sticks on the puck rather than kind of in the feet.”

Rhea Hicks has two of Canada’s three tallies, with Reichen Kirchmair potting the team’s other goal. Hicks has five of the teams 118 shots on goal, while Kirchmair has seven. That means the rest of the lineup has scored zero goals on 96 shots.

Given the talent on the Canadian roster, the law of averages says that something has to change in the very near future. Forward Jordan Baxter has a team-leading 17 shots and figures to break the ice soon, while defenders Brooke Disher and Sara Swiderski played together and were top offensive threats for their Rink Hockey Academy Kelowna team this year.

“I think we’re doing a good job of handling our emotions,” Canada’s Sarah MacEachern said after the U.S. loss. “Obviously it’s a huge rivalry, and we wanted to win, but we’re ready for the next team. And we hope we can meet the {U.S.} again later in the tournament. It’s definitely fuel. I think there were actually a lot of positives from that game, despite the score. It’s hard to look at it that way, but it was a lesson that we learned.”

After scoring just once in the first two games, Slovakia got a pair of goals from both Kapicakova and Hana Fancovicova in the important win against Germany. The Slovaks also netted their first two power-play goals in that contest, which provides them with special-teams momentum heading into the quarterfinals against a team that has spent a lot of time in the penalty box and struggled killing penalties.

Canada is a heavy favorite, but this tournament already has shown that anything is possible.

Czechia and Sweden square off in Friday’s other quarterfinal, and the Czechs are determined to show that they are deserving of being mentioned among that top group of teams going forward. Sweden played Canada tough in a 3-1 loss after opening the tournament with a 6-1 setback against the Americans. That put the Swedes in a 0-2 hole before they allied to beat arch-rival Finland, 4-3.

“We’ve come together for every game and become stronger,” Sweden’s Ida Karlsson told the IIHF after the win against Finland. “This builds our self-confidence, so we are excited.”

Sweden will have to figure out how to beat Czech 16-year-old netminder Michaela Hesova, who leads the tournament in goals-against average (0.39) and save percentage (.979). This will be her team’s toughest text of the U18 WWC however.

Czechia’s Adela Sapovalivova and Tereza Plosova rank among tournament scoring leaders with six and five points, respectively, and the Czechs have a pair of power-play goals in nine opportunities to rank second as a team in that category. Their top-ranked penalty kill has been perfect thus far, and they rank second overall offensively.

The Swedes are led offensively by defender Tuva Kandell, who ranks seventh overall in scoring with four points and is tied for fifth with three assists. Five other Swedish players have two points apiece to bolster a balanced attack.