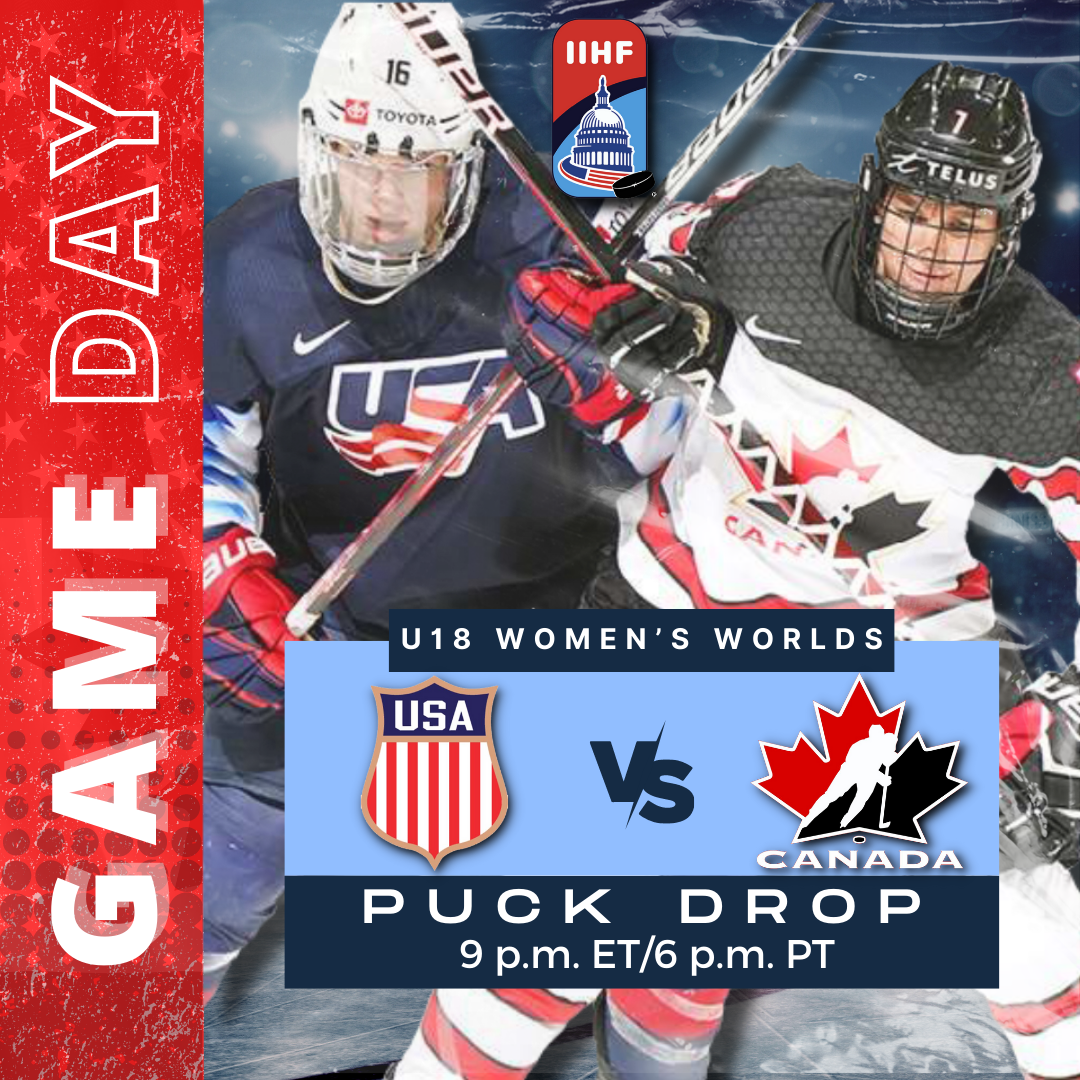 Much at Stake as the U.S. and Canada Meet in U18 WWC

When the United States and Canada meet in women’s hockey, the forecast usually calls for a high-energy, fast, super-intense and chippy battle that likely will be decided by a single goal and probably will need more than 60 minutes to determine the outcome. It’s one of the fiercest rivalries in sports and always worth watching whether a gold medal is at stake or the teams are playing a not-so-friendly “friendly” in some freezing locale during the dead of winter.

Often when the teams meet in the preliminary round of an international tournament there isn’t much on the line. They are so dominant that usually both teams have secured either a top seed or a bye in the playoff round and are basically jockeying for position and playing for bragging rights.

That doesn’t make the game any less intense, however, since no one ever wants to lose to their arch-rivals.

Thursday night when the U.S. and Canada clash in the preliminary round of the International Ice Hockey Federation’s Under-18 Women’s World Championship in Madison, Wis., the teams’ first meeting in this tournament will take on a little more meaning than usual.

For all but a few players, this will be the first time they get to dip their toes into the fiery cauldron that is USA vs. Canada women’s hockey in a game that counts. Now that those players have a couple games under their belts and have gotten over the initial excitement of donning their countries’ sweaters for the first time, they finally get the opportunity to experience one of sports’ greatest rivalries.

That’s not the only reason this matchup of the world’s top-two women’s hockey nations will be meaningful, however.

When the IIHF made the initial decision to cancel this year’s U18 World Championship before Christmas, the players on these teams had to fear they might never get this opportunity. Being on the U18 team doesn’t guarantee a future spot on the National or Olympic teams. There is a large pool of ultra-talented veteran players in the mix for spots on those squads once the players move beyond U18.

When this tournament ends, none of these players knows for sure if she will ever get to pull on her country’s jersey again – much less get an opportunity to play in a U.S. vs. Canada showdown – so those excruciating six weeks between the decision to cancel and the announcement that the tournament would be rescheduled and held in Wisconsin probably made for many sleepless nights.

“I heard rumors, but you never want to believe them until it’s true because you don’t want to get your hopes up,” United States forward and alternate captain Laila Edwards told the IIHF recently. We already had our hopes up in December. So, I heard about this, and I was like ‘Back on!’ I changed my mindset {and was} super excited. It still doesn’t feel real even though we’re here now.”

Fortunately, these rivals who have worked so hard for the opportunity to represent their countries will get the opportunity to face each other Thursday night, but it’s a little different than usual for one more very important reason.

In most international women’s hockey tournaments it’s a safe bet that we will be treated to two U.S. vs. Canada showdowns – one for the top seed in the playoffs during the preliminary round and another in the gold-medal game. The two countries have met for the gold medal in 12 of the 13 U18 World Championships that have been contested. The only year it didn’t happen was 2018 when the teams met in the semifinals, with the Americans skating to a thrilling 4-3 shootout victory before steamrolling Sweden, 9-3, in the championship game.

This time around things could play out a little differently than usual, though.

Canada opened the tournament with a shocking 2-0 loss to Finland, the first victory in tournament history for the Finns over the Canadians. Canada rebounded to pile up a 56-34 shots-on-goal advantage in knocking off Sweden, 3-1, in its second outing to even its record at 1-1 heading into Thursday’s tilt vs. the Americans.

A Canadian regulation victory paired with a Finland regulation win against the Swedes would create a three-way logjam at the top of Group A. The U.S., Canada and Finland would all have 2-1 records and six points in pool play in that scenario. If that were to happen, each team would have the same number of total points in games involving the other deadlocked countries.

That means the tie-breaking procedure would progress to the second criteria: goal differential. At this point, the United States has a commanding lead in that category with a differential of plus-10. Canada currently is even, while Finland is at minus-3. It is likely barring an unforeseen blowout loss that the U.S. would be a virtual lock to get the top seed and a bye into the semifinals if there were to be a three-way tie. Which team would receive the second semifinal bye would be determined by Thursday’s scores.

The top-two finishers in Group A earn byes, while the third- and fourth-place teams take on the first- and second-place finishers from Group B in the quarterfinals. The top overall seed plays the lowest-remaining seed in the semis.

Entering the final day of pool play, Czechia sits atop Group B with six points, while Germany and Switzerland each have three points. The Czechs and Swiss face off Thursday, with the Germans taking on Slovakia.

Because points are awarded differently for overtime and shootout victories, there are many scenarios that could play out depending on Thursday’s results. The most important thing for Canadian and American supporters to understand is that if the Canadians end up as the third seeds in Group A, they would have to play a quarterfinal game and then most likely beat a Finnish team they already lost to in the semifinals to earn the right to play for gold.

In a few of the simpler scenarios, the U.S. needs one standings point vs. Canada to lock up the top seed. If Canada and U.S. end up in a two-way tie that means the Canadians would have beaten the Americans head-to-head and earned the top spot.

A more complicated scenario would be set up if Canada and Finland were to lose in regulation. That would create a three-way tie for second in Group A, which would push the tiebreaking procedure to goal differential among Canada, Sweden and Finland. That is the only way Canada could end up with the fourth Group A seed, which could potentially lead to the Canadians taking on the U.S. in the semifinals. That seems unlikely considering that Sweden is minus-7 in goal differential heading into Thursday’s games.

None of that will be on the minds of the players Thursday night when the U.S. and Canada take the ice, though. It will be all about finding a way to beat their rivals and doing whatever it takes. Period.

“We’ve just got to play our game and stick to what we know,” Canadian captain Brooke Disher told the IIHF after her team’s victory against Sweden. “Today, we focused on winning our one-on-one battles, and that’s key in our game against the U.S.”

The United States holds a 12-7 all-time advantage against Canada in U18 WWC meetings and a 6-4 edge in games decided in overtime or by shootout. Starting in 2008, the U.S. captured three of the first four gold medals before Canada won three in a row between 2012 and 2014. The Americans went on to win the next three golds and has won five of the last six.

Overall, the U.S. has won eight gold and five silver medals, while Canada has earned five gold, seven silver and one bronze. Not surprisingly, seven of the nations’ 13 medal-round meetings have been decided in overtime or by shootout, with the Americans winning five of those. The last time the two teams met was for the gold medal in 2020, with Kiara Zanon’s overtime tally lifting the United States to a 2-1 victory.

The U.S. and Canada did play a pre-tournament game June 2 in Minnesota. The Americans won that contest, 3-1, despite being outshot, 34-32. While the Americans have been the sharper of the two sides thus far during the World Championship, scoring 11 goals to Canada’s three through two contests, anything can happen when these two countries meet.

“I think we’ve just got to have confidence in ourselves and not worry about our exhibition game,” Disher said.

Interestingly, Canada’s fourth line netted two of the team’s three goals vs. Sweden, with Rhea Hicks tallying twice. The U.S., which leads the tournament in goals, has four of the top-six scorers thus far. Tessa Janecke has three goals and two assists and has won an astounding 81 percent of her faceoffs. Laila Edwards is tied with Janecke for the tournament lead with three goals and also has two assists, while Sydney Morrow and Kirsten Simms round out the top six in scoring and rank first and second in assists with five and four helpers, respectively.

Both teams have used two goalies to date. Ava McNaughton has not allowed a goal for the U.S. while stopping 11 shots, and Annelies Bergmann has given up a single tally while making 20 saves. Canada’s Mari Pietersen has stopped 33 of the 34 shots fired her way, with Hailey MacLeod making 15 saves in 17 opportunities.

You can throw all the numbers out the window, though, when these two teams get together. The puck drops tonight at 9 p.m. Eastern. The game can be viewed on TSN and RDS in Canada and on ESPN+ in the United States.

“Our team is definitely ready,” Simms, also a U.S. alternate captain, told the IIHF. “We’re pretty confident going in. We trust everyone. We’re getting closer each day and we’re ready to go.”

The smart money says that one team will win by a single goal, probably in overtime and possibly in a shootout. With more at stake than usual, this game should provide gold-medal intensity despite being an opening-round contest.